The MiVue 688 is the near-top option in Mio’s latest range of dashcams. Mio was one of the first companies to see the potential in the dashcam market, with products such as the MiVue 388. But since then, the range of options in this area has exploded, so new models face stiff competition. Can Mio still hold its own?

The MiVue 688 has a reassuringly solid build. The device sports a 2.7in screen, with buttons surreptitiously hidden down the right-hand side to control the menu. There’s a power button on the left side and an “emergency recording” button on the right of the screen, both coloured orange. The latter ensures the current recording is kept in a protected folder and isn’t overwritten. 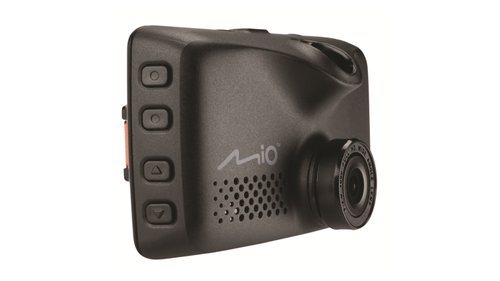 When you access the menu, the function of each of the buttons is indicated down the right-hand side of the screen. Some of the buttons will still be active during recording mode, with the bottom button being used to grab a still image and the next one up for capturing a custom safety-camera location. This only works when the GPS is active, and only stores these locally – you’re not contributing to a shared database.

The screen mount, as with most dashcams, is intended to hang down from the top edge of your windscreen. The MiVue 688 slides into this securely, but will be pretty hard to remove from its mount if you do want to take it out of the car when not in use. There are benefits to leaving it installed, though, which we’ll discuss shortly.

The power cable is the usual lengthy bit of wire found with dashcams, although also as usual no fixings are provided to help you route this around the windscreen of your car. The cigarette lighter adapter at the end of the wire is captured, so you won’t be able to use the MiVue 688 at the same time as a satnav, unless alternative powering is available for either device. 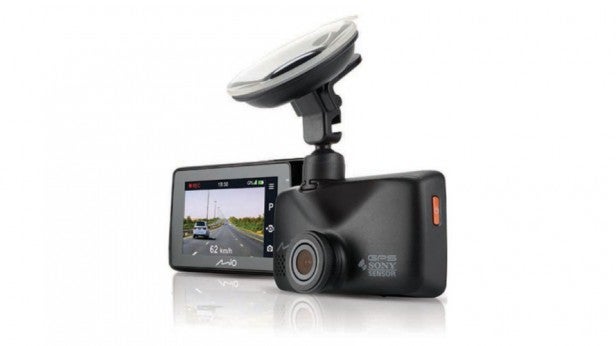 Only one recording option is available: Full HD 1,920 x 1,080 resolution at 30 frames per second, with a 17Mbits/sec data rate. You can’t select 720p to conserve space, and there’s no Super HD resolution available. For that you’ll need the top-of-the-range MiVue 698. Footage is recorded to microSD, and a 8GB card will be enough for around an hour of footage before loop recording kicks in – note that a memory card isn’t included in the box.

Mio doesn’t state the size of sensor used or its type, only that it’s made by Sony. I’d guess that this would be an Exmor CMOS, which has positive implications for low-light performance. But that’s just an assumption. The proof will be in the image quality the MiVue 688 can provide.

The MiVue 688 includes a GPS receiver, so locations are recorded along with the video. This strengthens its value as evidence, since this will also include your vehicle’s speed and confirmation of the time. There’s a 3-axis G-sensor to capture impacts and sharp braking or acceleration. But there are a number of extra safety features as well.

There is a database of safety cameras pre-installed on the MiVue 688, and updates can be obtained from the Mio website. These are free for the lifetime of the device. The safety-camera locations don’t include mobile cameras, and they lack the average speed zones added to the North Circular road in London within the last year. But the fixed camera warnings are clear, and genuinely useful. 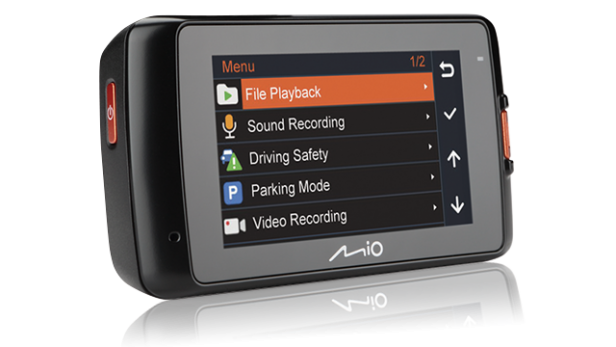 Lane departure warning system (LDWS) is also available. This operates when you’re on a motorway to tell you that you’re drifting out of the lane. It’s potentially useful, but will also trip when you simply change lanes for overtaking or are just obeying lane discipline. So you may or may not appreciate what it has to offer. But it does at least work as advertised.

There’s a headlight reminder, which tells you to turn on your lights when it gets dark, plus a fatigue alert that can be set to warn you that you’ve been driving for two, three, or four hours and maybe should consider a break.

The Eco Drive Indicator pops up a little leaf on the LCD screen that’s green most of the time, but turns orange if you accelerate too hard. This is theoretically useful, but you shouldn’t be staring at your dashcam whilst driving.

Finally, the forward collision warning system (FCWS) will notify you either by beeping or a spoken message that you’re too close behind the car in front and might be in danger of crashing. I found this way too sensitive, triggering too often and even when passing close to parked cars,. So I rapidly had to disable it before my passengers threw the camera out the window.

As I hinted towards the beginning of this review, there are benefits to leaving this camera installed in your car at all times – or one benefit anyway. The unit has a Parking Mode, where the device will use either both motion detection and a G-sensor, or one of these, to trigger a recording. So if someone bumps into your car, or tampers with it in some way, video will be recorded.

The fact that only frontal video is recorded reduces the value of this a little, but it could be handy for catching someone backing into you when parked.

Image quality isn’t as sharp as some of the dashcams I’ve tested, such as the Cobra CDR 875G, although the colour fidelity is good. In street lighting after dark, the MiVue 688 provides a reasonably bright image – but again, detail isn’t the best I’ve seen. Overall, performance is merely average.

Sample footage shot during daylight can be found here, and night-time footage here. 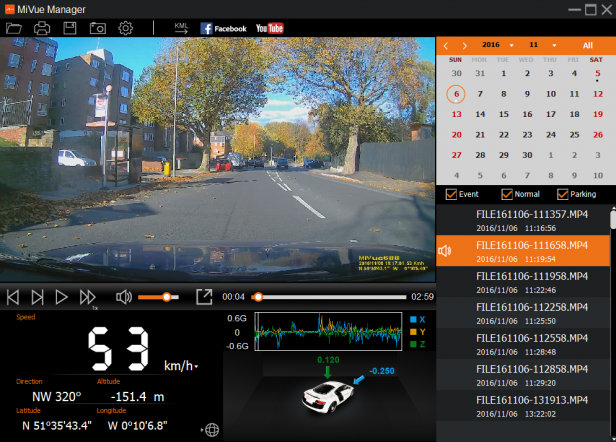 Footage is viewable directly from the memory card. But if you load the folder into Mio’s MiVue Manager desktop software, you can see the G-force and location information as the video plays, as well as upload footage directly to YouTube or Facebook, and export a KML file to view on a map. You can also switch the lower left-hand corner of the interface to a map view if you want to see this alongside the video

The Mio MiVue 688 is a decent, if not outstanding, dashcam. Image quality is reasonable, but lacks a little detail, and it does fall behind some of the competition by only offering Full HD resolution. However, the built-in safety camera warnings are genuinely useful, even if they’re missing some recent average speed zones, making this a dashcam worth considering.