The CDR 875 G is the next model up from the 855 BT in Cobra’s range of dashcams. The main addition is a built-in GPS receiver, which addresses one of our primary criticisms of the lesser model. In physical appearance it’s nearly identical, and the specification is very similar too. So is the CDR 875 G worth the extra £20? Let’s find out.

The CDR 875 G is designed to hang down from near the top of your windscreen, as do most dashcams. A small but effective suction mount is provided, which has the GPS module built in. The latter is a small square unit that protrudes from the side of the mount, and attaches to the dashcam via a mini-jack. 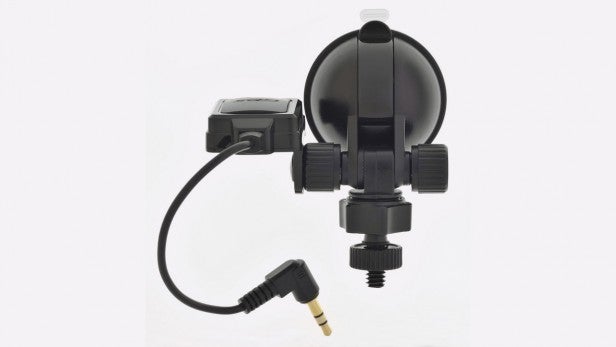 The dashcam has a little slide-on attachment that then screws into the mount. This is a standard tripod screw size, so you could in theory attach the CDR 875 G to other mounts – although these usually point up, rather than hang down, so the dashcam would be the other way up. I experienced problems with the CDR 855 BT’s mount, which would fall off the screen on occasion, but didn’t have the same issues with this model.

Power is supplied by the usual car adapter, which comes in two parts: cable and cigarette lighter plug. If your car has a powered USB output, you can use that instead, or use a dual-USB adapter to power your satnav at the same time. The USB cable is very long, so you can route it around your windscreen, but you’ll have to supply the means for fixing this yourself since nothing is supplied in the box.

One area that the CDR 875 G falls behind its most advanced competition is in terms of the video resolution on offer. Where the VicoVation Opia 2 goes all the way to 1,440p, and a number of others offer 1,296p, the CDR 875 G sticks with 1080p. Cobra gives no word on the size of the CMOS used, other than its 2-megapixel resolution – but that’s plenty for Full HD. 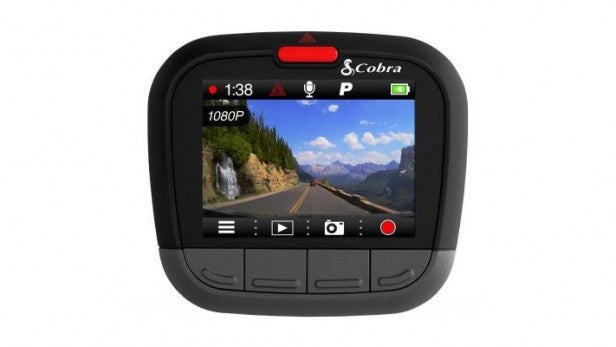 When a camera is used for security, having ultimate resolution and quality isn’t essential. But you do want enough detail to make out what actually happened when an incident occurs. Another key factor here is the compression. The CDR 875 G records at a fairly decent 11.8Mbits/sec, which is a good compromise between quality and not consuming your media too quickly.

The CDR 875 G comes with an 8GB microSD card in the box, although no adapter is supplied for fitting in a full-sized SD card slot when you want to read the files back on a PC. The 8GB card will be sufficient for around 90 minutes of footage. Once the card is full, recording will loop, overwriting the oldest files and replacing them with new ones – unless they’ve been protected as an incident.

Aside from the video record and associated GPS location information, the CDR 875 G also includes a G sensor so that it can detect events such as collisions and protect the current file as an event. The device can also provide information about red light cameras, speed cameras, police locations and other cautions. However, these aren’t delivered by a built-in database. Instead, you have to install the Cobra iRadar app for iOS or Android, and then pair your phone with the CDR 875 G via Bluetooth.

This is a fairly painless process. You don’t need to use the phone’s Bluetooth pairing; just turn on the dashcam and load the iRadar app, which will then find the CDR 875 G (also known as Drive HD) and allow you to connect to it. You can then choose which alerts to receive, and also whether these chime on the device or your phone.

It’s a slight drawback that, despite the built-in GPS, the CDR 875 G still relies on a smartphone for its bonus safety features. The advantage of the smartphone connection is that the data will be the most current available, and the subscription also lasts for the lifetime of the device. 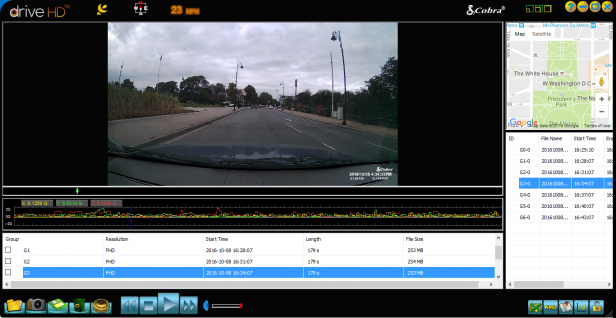 In practice I found the alerts effective enough, particularly since safety cameras are the main caution you’d want to know about. However, my experience with the CDR 855 BT was partially continued. Alerts didn’t chime on the CDR 875 G as there were supposed to, appearing only on the smartphone, so this had to be mounted in a visible place within the car.

There are no lane-departure or proximity warnings available with the CDR 875 G, either. While this puts it behind competitors in terms of sheer quantity of features, in practice I haven’t found either to be essential, so their omission isn’t a reason to avoid this product.

Despite failing to offer resolution above Full HD, the CDR 875 G achieves excellent image quality – at least for the intended use. Colours are a little muted, but the detail is excellent. As a record of what happened while driving, the footage should be more than up to the job of making out people’s faces, identifying features on vehicles, and reading number plates.

A sample of the video shot during day time can be found here.

The Drive HD software shows the G-force information, and the GPS was clearly working because the coordinates were visible alongside date and time in the bottom, right-hand corner; the speed is displayed at the top. But this wasn’t being picked up by the map, which seemed to think we were stationary at the US White House in Washington DC the whole time. Maybe it’s been influenced by Donald Trump.

The Cobra CDR 875 G doesn’t offer the very latest dashcam bells and whistles. The video resolution doesn’t go beyond Full HD, and the full range of safety features isn’t included. Nevertheless, you do get commendable video detail, but having the safety-camera warnings delivered via Bluetooth-connected smartphone is an issue.

I’ve come across some negative comments about this product’s reliability on Cobra’s website, but didn’t experience any issues myself. Overall, the CDR 875 G is a competent dashcam. It’s worth the extra £20 over the CDR 855 BT, but it would be better still if the smartphone safety warnings were delivered via the dashcam itself.

The Cobra CDR 875 G offers the essential dashcam features, including decent image quality and live safety-camera updates – although the latter is only available via a Bluetooth-connected smartphone.