What is the Mio MiVue 388 Drive Recorder?

The Mio MiVue 388 Drive Recorder is a GPS-enabled video recording device for your car. You might be wondering why you might want this, but increasing numbers of road travellers are choosing to record their journeys in case they need evidence of what actually happened in the event of an incident. Cyclists and motorcyclists lead this trend, but you could well be in this situation in your car as well.

In some countries, it is already quite normal to have a camcorder rolling in your car at all times. When a meteor shower hit Russia rather destructively earlier in 2013, there were so many videos of the event precisely because Russians face frequent claims of fault by people who deliberately cause accidents to extort money or defraud insurance companies. This may not be such an issue in the UK, but it does happen from time to time.

Rather than having to rig a consumer-grade camcorder up yourself, or rely on an action camera that was built more for capturing extreme sports than personal driving surveillance, Mio’s new range of Drive Recorders are specifically designed for the job. The Mio MiVue 388 Drive Recorder here is top of the range, with a more limited 338 and 358 also available. These have more limited features, in particular not containing the GPS receiver and safety camera facilities, which we will be covering in detail later in this review.

The MiVue 388 is a square device that looks a lot like a small sat-nav. However, while it does have a GPS receiver built in, it doesn’t have any mapping facilities. Instead, the 2.4-inch LCD screen on the front shows what the camera on the rear is seeing. The lens has a 120-degree angle of view, so captures quite a bit of what is happening either side of the car, as well as what is in front. 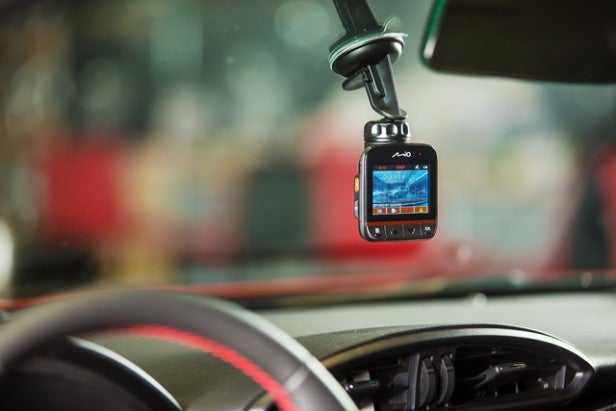 A typical sat-nav-style suction mount is supplied in the box, but the device is designed to be positioned near the top of your screen hanging down rather than at the bottom. The usual cigarette-lighter power cable is also supplied, but due to the location of the device you will need to route the cable around the outside of your windscreen, for which a bag of adhesive clips is supplied.

All of the MiVue devices are designed to begin recording when you start the car, and stop when you turn the engine off. Although the Mio MiVue 388 and other models in the MiVue range do have their own batteries, the default mode is to detect when external power is supplied, and begin recording immediately. However, you can also set the device to start recording manually.

The MiVues contain G-sensors, too, so they will trigger a special recording when they detect an impact or when you take a corner too quickly. You can also press one of the buttons on the device to earmark a recording as an emergency clip rather than one of the continuous ones. The MiVue devices also have photo modes, so you can use them to take pictures of collision damage, which will also be time and date stamped.