It’s been a long two years since our fearless leader first clapped eyes on Pandemic’s Mercenaries 2. In that time, the open world game has blossomed on the next-generation consoles, giving us such gems as Crackdown, Just Cause and – of course – Grand Theft Auto 4, not to mention the hybrids that have adopted the open world approach for other genres; a roster including Assasin’s Creed, S.T.A.L.K.E.R., Viking: Battle for Asgard, Crysis and Burnout Paradise. 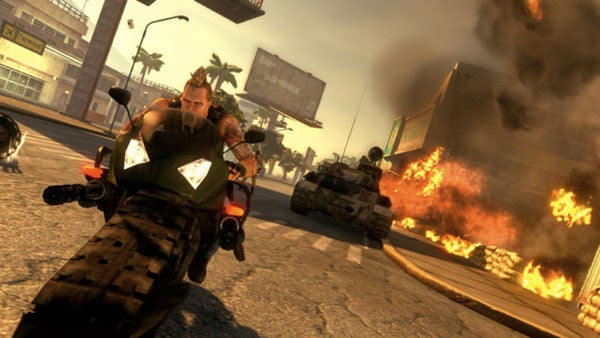 As a result, it’s getting harder and harder to be impressed by huge, explorable environments, optional missions and sandbox gameplay these days. And this is one of Mercenaries 2’s big problems. When it was first showcased such things seemed like gaming’s rich future. Now it arrives at a time when we expect more. What’s worse, Pandemic’s game now seems hugely reminiscent of Just Cause – a game released nearly two years ago. You can’t help wondering “why the wait?”


You see, like Just Cause, Mercenaries 2 is an open world third-person action adventure with most of the emphasis on action. It shares a similar Tropical South American setting – here a not too flattering caricature of Venzuela – crammed with jungle, beach and mountain scenery, and involves playing several establishment, criminal and revolutionary factions off against each other by tackling missions and taking over outposts. In Pandemic’s defence, the original Mercenaries did an awful lot of this stuff first, but anyone who played Just Cause and now plays Mercenaries 2 will have more than the odd spot of déjà vu. 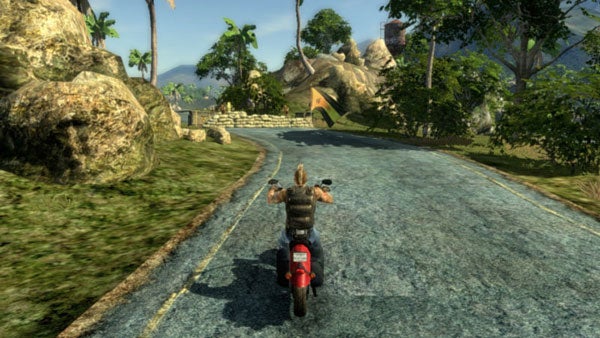 The more serious charge against Mercenaries 2 is that it doesn’t feel all that polished for a game that has spent so long in development. In fact, that’s an understatement. I’ve yet to come across any of the game breaking bugs that other gamers and reviewers have reported, but I’ve seen my share of weird visual glitches and absolutely bewildering AI mistakes. Driving, for instance, seems to be beyond the capabilities of the poor CPU-managed population of Pandemic’s Venezuela; you’ll regularly see tanks stuck driving into rocks or vehicles trapped against each other at junctions, and the drivers will just carry on moving forward without a hope of getting out of their predicament. Objects and even people hovering in mid air are not an uncommon sight, either. Unfortunately, all this stuff makes the impression of a virtual world wobble like a cheap set in a daytime soap. 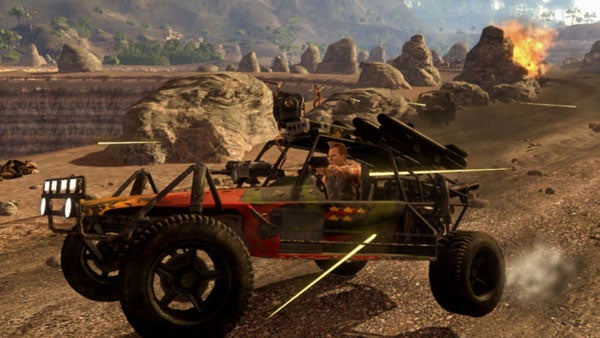 Poor AI is an issue throughout. With a game that focuses heavily on combat, you’d have thought more effort could have been made to make enemy soldiers use squad tactics or even a little common sense. Instead, we’re back in the days when enemies have two modes – rush and attack or hide and snipe – with neither proving all that effective. It’s true that there can be a lot of AI characters on screen at any time, and that there are often troops of different factions fighting against each other, but compare Mercenaries 2’s Venezuela with Liberty City or even The Holy Land of Assassin’s Creed and it feels like a cardboard-thin facsimile of a living, breathing virtual world.

Technically, Mercenaries 2 is a mixed bag. In terms of environmental detail it’s roughly on a par with Just Cause or Test Drive Unlimited – both, let’s remember, two years old – and nowhere near on a level with Uncharted: Drake’s Fortune or Crysis. To balance that, the rendering of characters is a huge improvement on Just Cause, with decent models and plenty of texture detail. More good? Strong lighting and decent shadows make up for the occasional bland surface, More bad? There’s a worrying amount of pop-in on the 360 version as bits of grit or small rocks on the road ahead suddenly appear in front of your vehicle. Still, at least the Havok physics engine is employed with real panache. When things go boom – and they will on a regular basis – buildings and objects are blown apart in spectacular fashion. Walls crumble, masonry tumbles and the local population are chucked around like rag dolls. That’s just what we want to see in this sort of game. 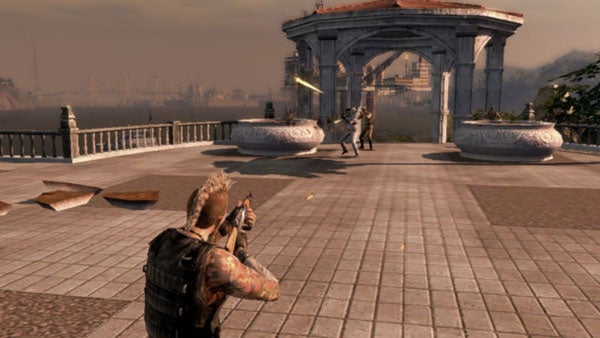 On the negative side, I should mention that Mercenaries 2 features frequent and repetitive quick-time-event sequences that kick in every time you have to take over a tank or grapple your way onto a helicopter. Things could be worse – they’re pitifully easy – but once you’ve seen the same animation of the driver or pilot being dispensed twenty times or more in the space of a few hours, you’ll begin to wonder “Why? Why? Why?”


Now, having read most of the above you might think that I have a real downer on Mercenaries 2. In fact, nothing could be further than the truth. My simple, shameful secret is that while I think it’s a bit rubbish, I kind of love it. Pandemic’s game is dumb, pitifully unfinished and woefully lacking in any real substance or innovation, but it’s also fun, fun, fun. It’s nonsense, but ridiculously enjoyable nonsense all the same. 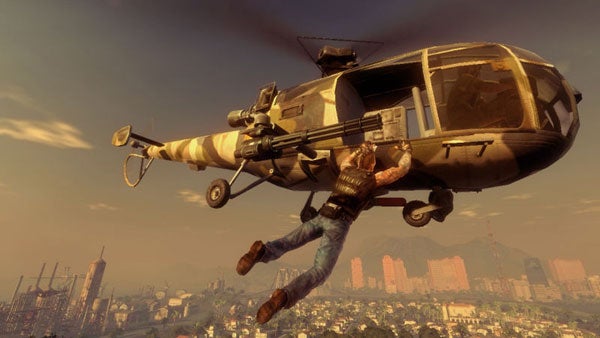 Mainly this comes down to the fact that Pandemic hasn’t messed up the stuff that was good about Mercenaries 1. It gives you freedom, but also gives you well structured missions which aren’t all about ‘go to point A, kill bloke B and destroy building C’ but might include arranging to steal certain items with a helicopter, hijacking specific vehicles or tracking down and rescuing a hostage. In nearly all cases you have a choice of a) blundering through against incredible odds or b) looking at the environment and treating each mission as a sort of puzzle to be completed, where an easily hijacked tank or a handily positioned artillery gun turn out to be crucial pieces.


There are annoyances – particularly buildings that regularly respawn RPG-toting goons – but these can be defeated with high explosives, while a generous health recharge system means you won’t normally spend huge amounts of time restarting difficult missions over and over again. You could hardly call Mercenaries 2 realistic or even hugely challenging, but neither is it frustrating. Hours go by leaving a big, silly grin in the middle of your face.

Mercenaries 1 was also notable for providing you with a huge range of vehicles and making them all a lot of fun to drive. Mercenaries 2 has over 150 bikes, cars, trucks, tanks and armoured cars to get in, plus helicopters too if you can (rather ludicrously) hijack one. There are some thoroughly enjoyable driving missions and optional challenges out there, and one vehicle – a sort of Frankenstein monster truck with a hydraulic boost – is an absolute hoot. 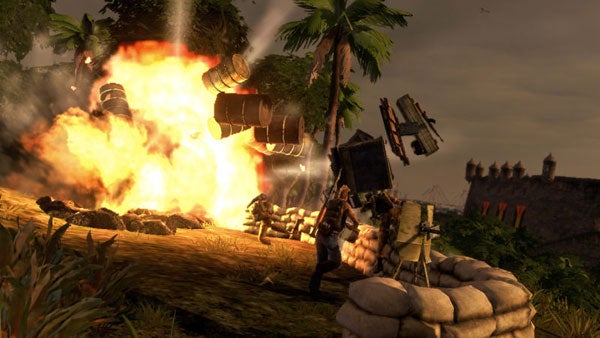 Above all else, however, Mercenaries 2 works because it combines a playful and sardonic sense of humour with an appetite for destruction that only Battlefield: Bad Company and Black could hope to match. Where most open world games discourage mayhem, Mercenaries 2 screams “bring it on” as you demolish whole outposts with tank shells and C4 charges, battle helicopters with heavy machine guns, wreck squads of gunboats with recoilless rifles and generally bomb Venezuela back into the stone age. ‘World in Flames’ isn’t just a subtitle – it’s an accurate description.


A key part of this is the game’s sensibly implemented system of support units. Early on you’ll recruit a helicopter pilot and then a drunken Russian jet jockey. Using the D-pad, smoke signals and your central PDA you can use the former to transport you or pick up fuel, armaments and large cash deposits and take them back to base. The latter, meanwhile, can be called upon to bring in airstrikes and bunker busters, making short work of dug-in enemy forces or heavily guarded installations. This isn’t just practical, it’s aesthetic. I hate to admit it, but watching so much stuff blow up is actually pretty cool. 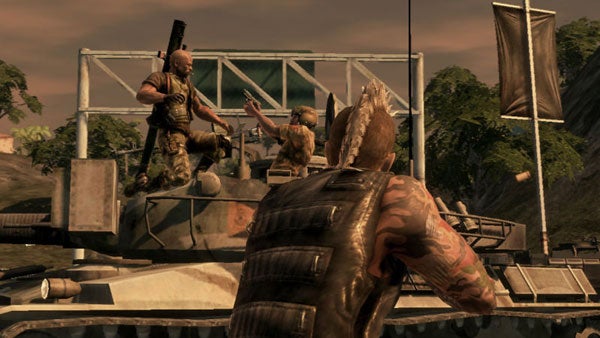 And the game and its script are funny – and not just unintentionally so. While head mercenary Matthias looks like the sort of standard-issue hard nut found in Army of Two, he’s got a likeable, gruff character and a decent set of one-liners, even if you’ll hear them repeated too often for comfort. Excellent voice work by character actor Peter Stormare (you might remember him from Fargo, Prison Break or Minority Report) definitely helps, as does a fine supporting cast. What’s more, the game never takes itself too seriously. Just wait until you see ‘the devastator’ and you’ll see exactly what I mean.


Finally, Pandemic’s game benefits from an excellent drop-in, drop-out two player co-op mode. It’s best enjoyed with a friend and using headsets so that you both have some idea of what you’re doing, but even dropping into a stranger’s game and helping them blast their little virtual Venezuela to kingdom come is fun in a Crackdown sort of way. Somehow, the patchiness of the game helps. When the world itself feels so flimsy, there’s no need to be too precious about wrecked cities and shattered alliances. It’s all just there to wreck it up. 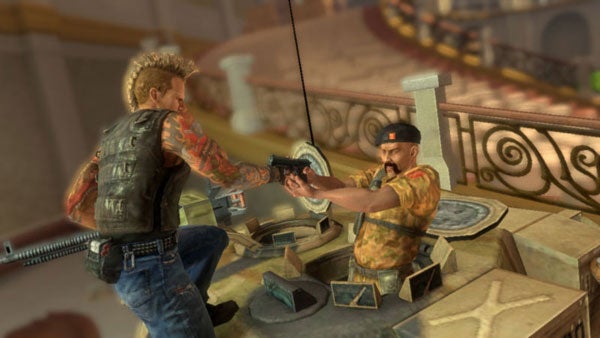 Do these things make up for the game’s failings? No, but they go a long way towards ameliorating them. In a way, it’s disappointing that Mercenaries 2 doesn’t live up to the potential we once saw within it, but taken in the right spirit and with a willingness to forgive its many flaws, it still delivers a good time. I can think of other, more highly regarded or polished games that can’t say the same thing. Given the choice, I know which I’d rather spend my time playing, and you could do far worse than make the same decision.


Dated, unpolished and riddled with faults, Mercenaries 2 somehow survives to be a great dumb but fun action title, particularly when played with others.