I think we all owe crackdown an apology.


First of all it was branded a simple GTA clone, albeit one with interesting cel-shaded graphics. Then it was regarded as the sort of lightweight effort that needed a bundled entry to a Halo 3 beta to make sure it flew off the shelves. Well, it turns out that we were wrong on both counts. 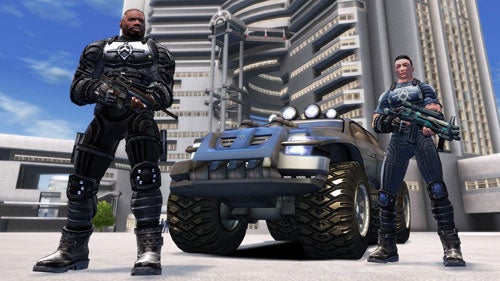 The first is just nonsense. Unlike, say, Saint’s Row or Scarface, Crackdown has nothing to do with the usual gang-banging, pimping, dealing tosh. It’s played third person, involves cars and takes place in an urban open-world setting, but there the comparisons end. And while the Halo 3 beta is a definite bonus, Crackdown doesn’t need it to get our attention. This is a game that can stand proudly on its own two feet.


Perhaps one day we might be able to play an open world game without mentioning GTA, in the way we don’t now inevitably mention Command and Conquer or Doom every time a new RTS or FPS comes out. For now, instead of thinking GTA, you might consider two more meaningful comparison points. First, last year’s Just Cause, both for its assassination set pieces and the way getting around was part of the fun, and second, 2005’s Hulk: Ultimate Destruction. Why the latter? Because it’s probably the most successful game to involve super-powers in an open world, and because those super-powers are instrumental in making that open world fun. All the above is true of Crackdown. 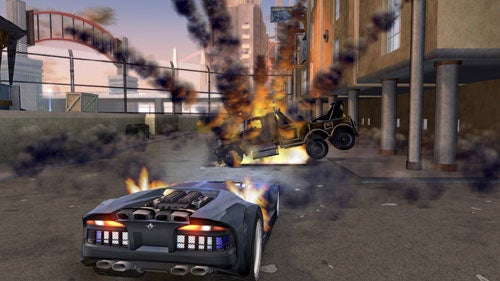 Confused? Here’s the setup. You’re a genetically engineered super-cop, set loose on a city on the verge of social collapse. Three gangs run riot on the streets, each laying claim to a specific portion of the city. Eliminate the gang leaders and you can restore peace, but it won’t be easy. To even have a chance of taking the three kingpins down you’ll have to tackle their lieutenants one by one, tracking each to his or her hideout and making sure you put them out of action permanently.


And that’s basically it. There’s no storyline, no cut-scenes to wade through, and no missions as such, just gameplay. You won’t even know who and where your targets are until close proximity brings up an intelligence briefing. This means that you’re basically free to obliterate the twenty-one key villains in any order and however you choose. The catch is that, while you can try to tackle who you want when you want, your chances won’t always be that good. On your first attempt, the game’s superb deadpan commentary – a mix of online help and cutting observation – will cue you in to your predicted odds, and the game will cheerfully recommend that, if necessary, you come back later when you’re better equipped to cope.

In other games this might mean heavier weaponry or armour, but here it means enhanced capabilities. You start with skills in five categories – agility, strength, driving, explosives and marksmanship – and by tackling the gangs in appropriate ways or collecting specific markers you gather upgrade orbs that will eventually level-up that power. As the game progresses you’ll be better able to target and lock-onto enemies while at distance or on the move; make enormous leaps and scale the sides of the highest buildings by jumping from ledge to ledge; pick up blocks, skips and even cars and toss them at assailants, and a whole lot more. When you start out you can wade into a group of hostiles and punch their lights out, but five hours later you’ll be smacking them halfway up the street before their just-pwned ass hits the pavement. 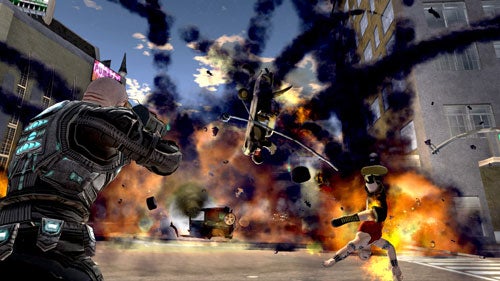 This isn’t merely an excuse to show off the game’s Havok-based physics – though it certainly does a fantastic job of just that – it also really opens up the whole experience. Once you’ve won the first upgrade on your acrobatics the whole city becomes a giant platform game. The buildings aren’t just designed to look impressive and give a sense of massive scale, though they certainly do that; the whole cityscape has been cleverly designed to challenge your jumping expertise. Soon you’re scanning the rooftops for further agility upgrade orbs in the knowledge that if you can’t quite make it up there yet, it’s only a matter of time. 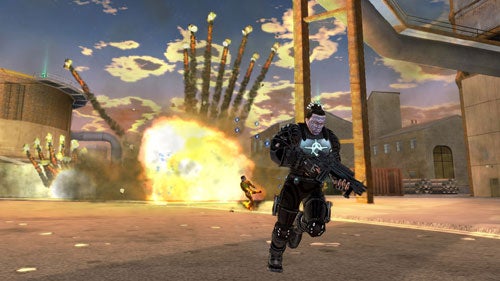 What’s more there are plenty of side-missions to help you level up, such as driving challenges and daredevil rooftop races that see you throwing yourself from point to point with heart-stopping abandon. If you thought Just Cause had thrills to spare, Crackdown makes it look timid. Cunningly, you might also notice that this all means the game rewards you for doing what you like doing best. If you wade into gangster HQ throwing grenades and spitting bullets then you’ll soon fill the upgrade gauge in both the marksmanship and explosives categories and get better at doing just that. If you’d rather use acrobatics to find a back way in, you’ll get upgrade points for that.

It might not have worked if these ideas weren’t so superbly executed, but they are. The controls are slick, with responsive, high-speed movement and melee combat and targeting features that put other open world games to shame. In a way it’s a compliment that the driving is probably the least compelling aspect of the game. The handling model is fantastic, and there is a superb range of vehicles to choose from, but why bother with something so prosaic as driving when you can leap tall buildings with only a couple of bounds? 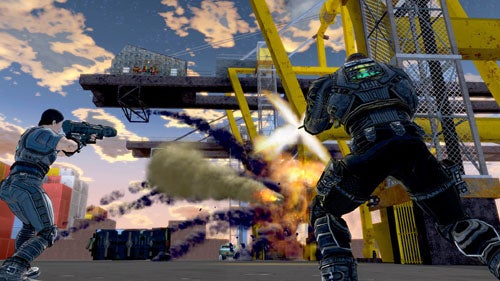 Over time the game boils down to a matter of establishing the locations of the various bosses and sub-bosses, working out a logical order and then trying to spot a weak point. Along the way you’ll also grab supply points, which are handy spots where you can drop off weapons, move instantly and – most importantly – respawn when vast numbers of gang members batter you into submission.


Now it must be said that at times the actual encounters lack drama – the bosses are nearly always lurking on a rooftop or in a compound surrounded by gang members, and while the AI isn’t bad it’s hardly the stuff of F.E.A.R. However, the game encourages you towards creating your own set-pieces. One minute you might be making a vertiginous climb up a lighthouse, the next you could be storming an island hideout single-handed. With bullets and bodies flying everywhere, fuel drums and grenades exploding in all directions, and you racing headlong right through the middle, games simply don’t get any better than this. 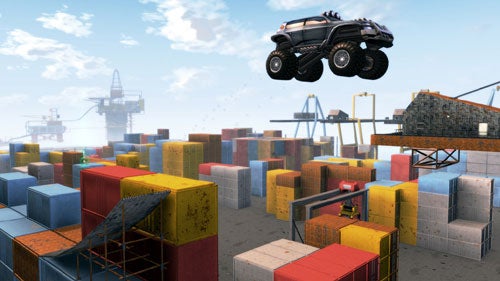 Of course, not everyone will agree. The look, for example, is determinedly counter the current trend towards photo-realism, though I think the combination of cel-shading and inset detail – reminiscent of a gritty, sci-fi graphic novel – fits the style of the super-powered action much better than the Gears of War approach would. Some may dislike the lack of structure, find the action repetitive or complain that it doesn’t last long enough. Well, maybe this isn’t an epic of GTA proportions, but I can only imagine that those who cracked Crackdown in less than eight hours must have a) really burnt through it and b) missed out on a lot of fun along the way. The action, meanwhile, only gets repetitive if you take the same approach to every boss. Take time to explore your capabilities, and the game constantly surprises you by accommodating nearly every whim. This is not the sort of game that drives you from climax to climax like a symphony. It’s a game that wants you to improvise, to play – to just have fun.

And on this count it succeeds better than arguably any game I’ve played so far this year. In fact, if you want proof of how well it deals with everything, you only need to look at the way it incorporates Live play. A lesser game would have thrown in a lazy collection of deathmatch or capture the flag modes, but Crackdown implements a drop-in, drop-out co-op mode, where you can opt to leave your single player game open for friends or even strangers to join in, or request to join another player’s game. This sort of generous spirit sums up the game as a whole. It’s as if it’s saying “you’re having fun, why not share it?”. Needless to say, any game with this much car-tossing, acrobatic, high-explosive action is a must to play with a mate, and I wouldn’t be surprised if the sheer stupid joy of blasting things to smithereens keeps this playground open for some time. 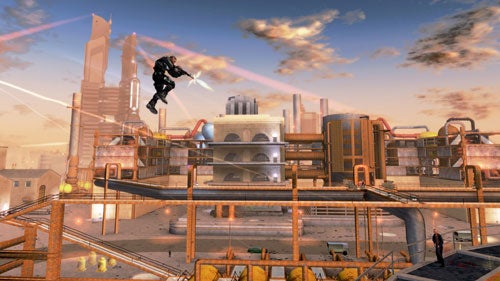 So let’s say a big sorry to Crackdown and thank the heavens above that it has appeared. It isn’t profound, particularly deep or all that revolutionary, but it never fails to entertain in the most wonderful, big-hearted way. For me, that makes it the first must-have 360 game of the year.


A storming blend of superheroics and open world gameplay, and a 360 essential even without the Halo 3 beta invitation. Cracking stuff.