The Manhattan T3-R is a Freeview Play-powered set-top box with an integrated hard drive for recording.

It’s intended for those who want a versatile, time-shifting viewing experience, without the ongoing cost of a premium pay TV service such as Sky Q or BT TV.

The PVR – sometimes called DVR – market was thriving a few years back, but the unstoppable march of streaming services such as Netflix and Amazon Prime has rather diminished its appeal. In this on-demand age, the need for time-shifting isn’t what it once was – so can the Manhattan T3-R rekindle our love for series-linking?

Smart and compact, with a glossy plastic finish, the Manhattan T3-R looks entirely respectable. Connectivity is par for the course, with HDMI, aerial loop-through, optical digital audio output, Ethernet and Wi-Fi. There’s a USB socket, but that’s only for power. It ships with a full-size, multi-button remote controller.

The T3-R is 4K and HDR – that’s to say, HDR10 and HLG – ready, although the catch is that there’s no 4K carried over the air on the Freeview platform. It will play 4K from YouTube and BBC iPlayer test streams, however. Audio compatibility covers Dolby Digital Plus and stereo. 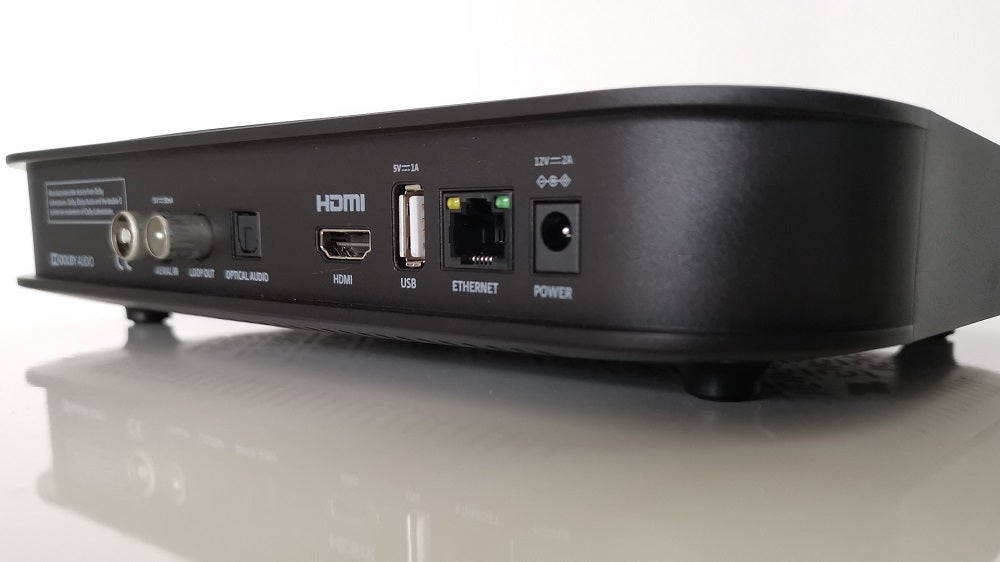 Setup is refreshingly straightforward: just hook up the PVR to a network connection and store channels. (Manhattan sent us two boxes to test the Wi-Fi performance after our original review encountered issues with it. We’ve concluded that the issues in the review were down to interference, and that the box offers solid enough connectivity.) Our suggestion would be to hard-wire the network connection if you can, to avoid any weak Wi-Fi connectivity or wireless interference.

Usability is good. The home-screen provides access to catch-up players, shortcuts to the TV guide, and your recordings library. Even technophobes won’t be befuddled by this box. 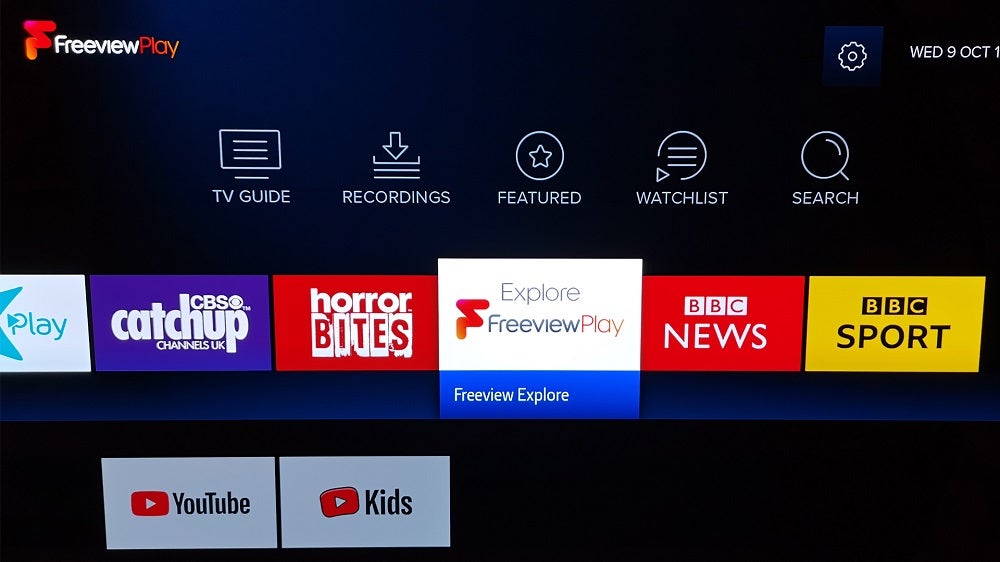 Content navigation is a strength. A broadcast-channel browser at the bottom of the screen encourages viewers to mooch around.

There’s inevitably some level of noise from a hard drive recorder, but the Manhattan T3-R does a good job of keeping things civil. It’s no noisier than a Sky Q box.

So what do you get with Freeview Play? Variety, for one thing – provided you’re not too fussed about watching standard definition channels. There are currently 85 linear channels on the platform, the majority of which are SD.

The significance of this will, to a certain extent, be determined by the size of screen with which you intend to partner this box. If your TV is smaller than 50in, the lack of clarity offered by SD becomes less of an issue. Watch standard definition on a 65in model, though, and the lack of clarity becomes obvious.

If you still buy and watch DVDs, it’s reasonable to assume the preponderance of SD on Freeview Play won’t be a deal-breaker. 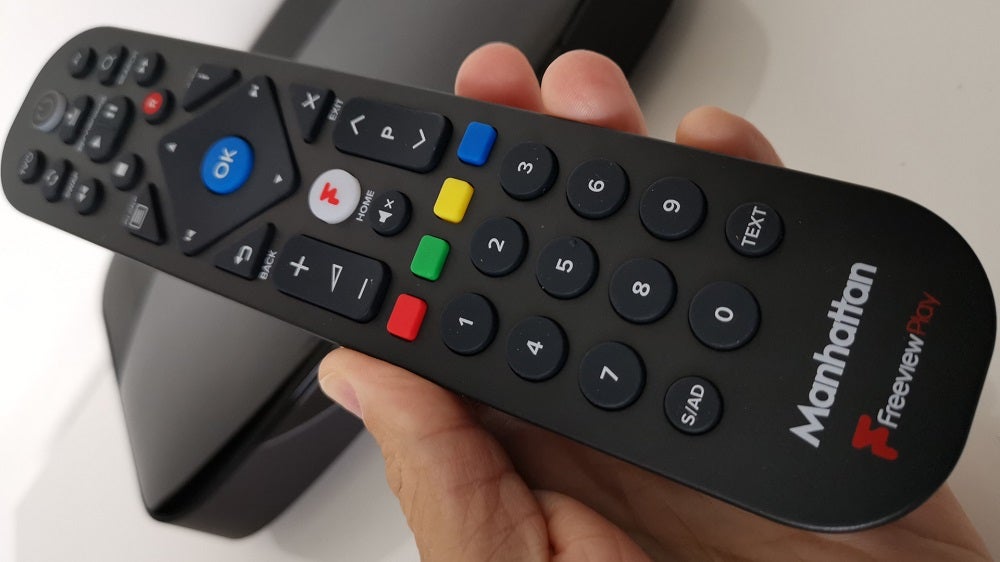 In addition to the channel selection, there’s a full complement of mainstream catch-up apps (they come as part of the Freeview Play package). Specifically these include BBC iPlayer, ITV Hub, All4, My5, UKTV Play, BBC News & Sport, CBS Catch-up and Horror Bites. There’s also YouTube and YouTube kids.

The Manhattan T3-R comes in two versions, one with a 500GB drive, and the other 1TB. The former, as featured here, has a recording capacity of 300 SD hours. Familiar recording niceties include series-linking and live pause.

Just as Muttley follows Dastardly, picture quality follows broadcast fidelity. The best-looking HD channels, such as NHK and BBC News, look beautifully sharp and artefact-free. Detail is pronounced and there’s an omnipresent sense of texture and depth – essentially what you’ll see, or more pertinently record, looks transparent to the source.

As expected, SD channels are more compromised – but, again, what you see is what you’d have viewed live, so no complaints here. It would be nice to have some sort of on-box confirmation that the PVR was recording, however. 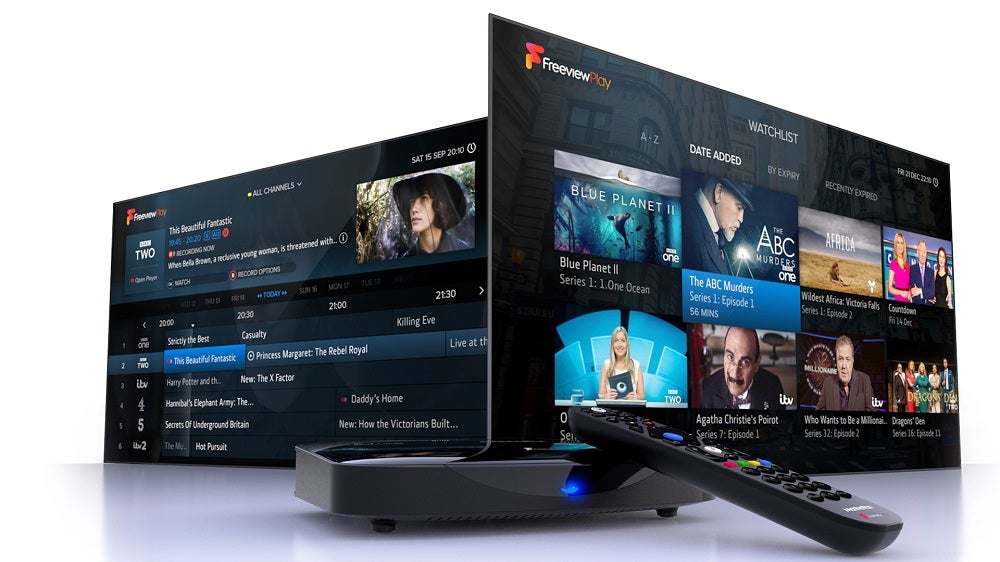 Resolution output options cover 720p 1080i, 1080p and 2160p at 25Hz. In order to avoid unwanted anomalies, it’s best to select Match Frame Rate in the settings menu, which will ensure you get the original 24, 30, or 60 frames per second playback.

There is a limitation when it comes to recording. The T3-R can only record two channels at a time, while you watch a third. We’re told by the boffins at Manhattan that they’re looking into enabling a third channel to be time-shifted simultaneously, and that the feature could come via a firmware update. Fingers crossed. 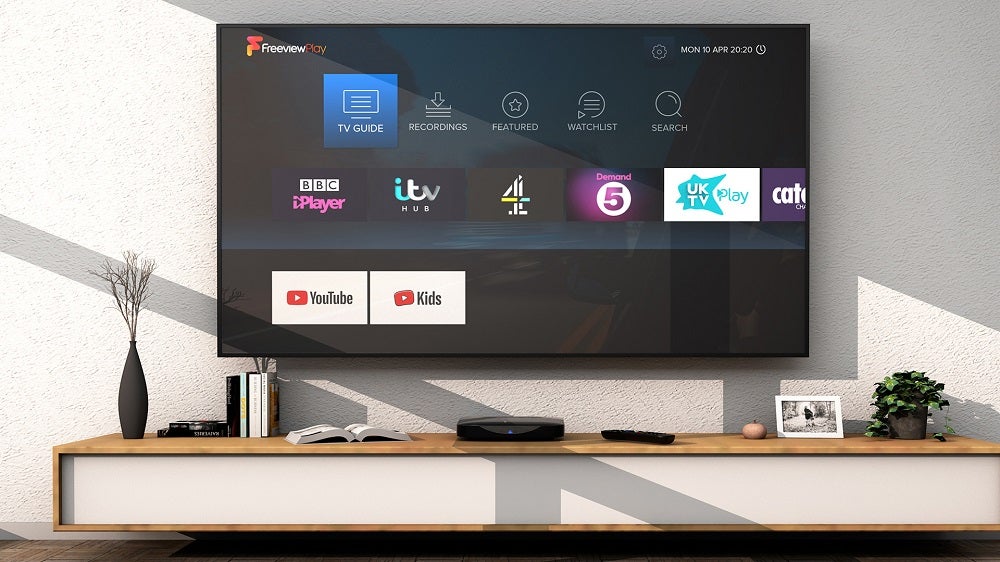 Freeview Play is a significant step up from regular Freeview, in both operation and service. Programme curation is a particular strength. The roll-back, seven-day programme guide provides a different way to locate shows you may have forgotten to record, while a watchlist allows you to build a list of on-demand content you might get around to watching one day.

There’s also a variable lip-sync delay – up to 250 seconds – in case you’re suffering with sync issues because of a soundbar.

The T3-R perfectly fits that bill. It’s particularly enticing if you want to upgrade your viewing experience but don’t feel the need to invest in a new TV (we can imagine it being partnered with long-serving plasma sets, which seemingly refuse to give up the ghost).

Audio visual quality is top-notch, having the ability to stream in 4K from YouTube is welcome, and the Freeview Play interface is on the right side of leading-edge.

Niggles are minor, but our principal caveat is the limited number of channels that can be recorded simultaneously – irksome, if you live in an area where the broadband speed isn’t conducive to care-free streaming.