Logitech’s G413 is a mid-range gaming keyboard that comes with competitive features, a sturdy design and a brilliant set of key switches. It comes in two specifications: Carbon (black base with red lighting) and Silver (silver base with white lighting).

In a competitive market, Logitech has done enough to make the G413 stand out as the best keyboard you can buy for under £100.

At the time of writing, it can only be bought from Logitech’s own website in the UK, but it is available from a variety of retailers in the US. 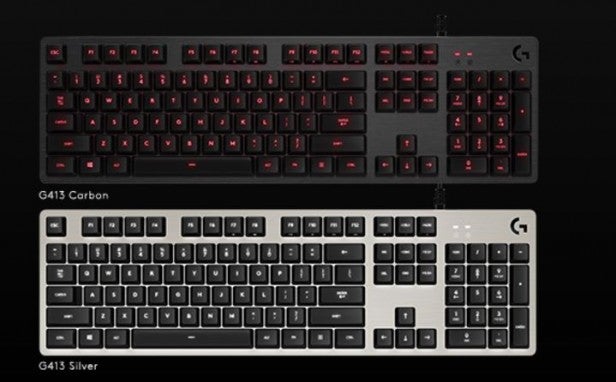 The G413 is one of the best-looking mid-range keyboards you can buy. It sports a brushed aluminium finish and a borderless design, which means the keys stick out from the top of the chassis. This is my preferred design and seems to be the trend among £100 keyboards.

I tested the Carbon model, and while I love the way it looks, I do wish Logitech hadn’t chosen red backlighting –  instead opting for blue or even white, as it is on the silver model. In my opinion, red feels a little too aggressive and game-centric, and won’t fit every desk. The fact there a silver model is available means this isn’t a huge issue, but I hope Logitech considers expanding the colour options in the future.

In terms of layout, it’s standard stuff. You get a full set of keys and a number pad. F7 through F12 and Print Screen, Scroll Lock and Pause have dual functions, which can be activated by pressing them along with the Fn key that’s found next to the Alt Gr key. The extra functions are for backlight brightness, Game mode (turning off Windows key and other buttons you choose), play/pause, stop, rewind, skip, mute and volume up and down.

It’s a good way of shoe-horning media keys onto the keyboard without spending more on extra buttons or rollers – but having to use the Fn key doesn’t really come naturally. You can use Logitech’s Gaming software to make those the default functions (no Fn key required), which makes it somewhat more useful. 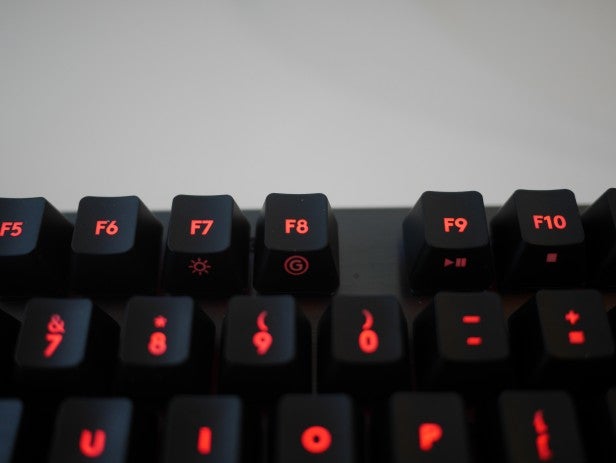 There’s a USB passthrough at the back, which I used for my gaming headset without issue at all. It’s all routed through a quality-feeling braided cable to two USB connectors at the other end. There’s no 3.5mm passthrough, but in 2017, I think that’s fine; USB headsets offer a better experience than analogue models. You can run your headset’s cable under the keyboard through a small gutter, which is a nice addition.

The two legs are sturdy and the board didn’t move an inch throughout testing, and I’m a fairly aggressive typist and gamer.

One final curiosity is the lack of a Num Lock indicator light on the keyboard itself. There’s a Caps Lock light and a Game mode light, but Num Lock is only signified with a brief on-screen graphic, and only if you have Logitech’s software installed. It’s minor, but annoying nonetheless. Did the design budget not stretch to an extra LED?

In the box you get some extra keys: Q, W, E, R, A, S, D, 1, 2, 3, 4 and 5 all get alternative key caps, which have a trough that makes them both easier to find and harder for your fingers to slip off. You also get a key cap remover so you can make the changes easily yourself. 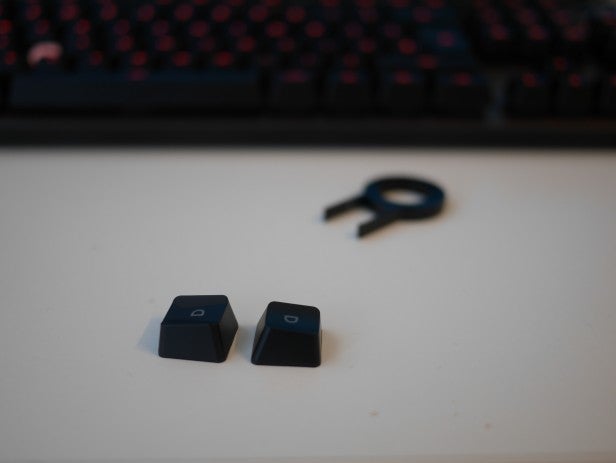 Logitech has opted to use its own Romer-G key switches here. While this might disappoint Cherry fans, I’ve been rather won over by the unique characteristics of the Romer-G. In my opinion, they offer the ideal mix of comfort, responsiveness and clacky-ness that make this keyboard perfect for both work and play.

For fans of numbers, the Romer-G has an actuation force of 45g, which is pretty standard across most switches. However, it feels heavier thanks to some pretty aggressive damping after the actuation point (the moment at which a keystroke is detected), which stops the switch from bottoming out under normal circumstances. Total travel distance is 3mm, which is shallower than most Cherry keys; these go to 4mm. 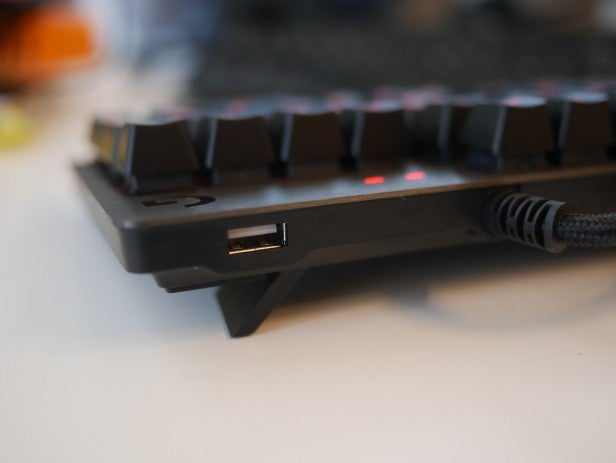 My previous keyboard, with Brown switches, was the bane of my partner’s life. She hated using it for typing, and hated hearing me clacking around on it. She much prefers the G413 and happily works on it all day – and doesn’t mind the noise quite as much, either. Depending on how you type, the Romer-G switches are either pretty quiet or pretty noisy, with a lot of clack if you have a more percussive typing action. If you want something quieter, consider a keyboard with Cherry MX Silent or Red switches.

For gaming, I was once again very happy. The shallow action meant games were responsive (I played a mix of strategy game Men of War and first-person shooter Battlefield 1 for testing) and I didn’t experience any issues. 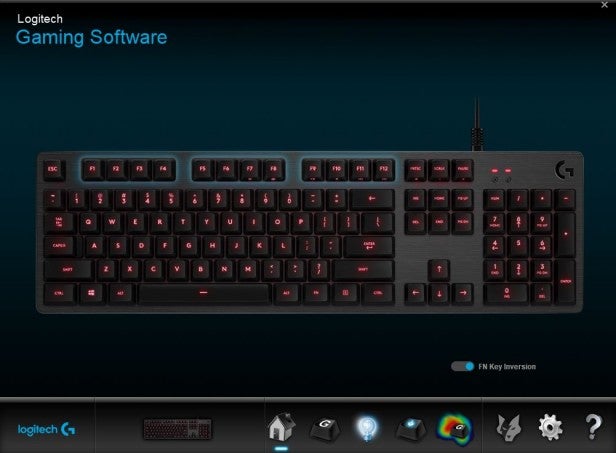 I advise that you download the Logitech Gaming Software program before using this keyboard. It opens up various options, including adding extra macros to keys, creating specific profiles for games, choosing which keys Game mode disables, and changing the brightness of the backlight more precisely. You can even track your gaming habits by turning on heatmapping.

Disappointingly, you can’t activate/deactivate specific key backlighting, which is something numerous other keyboards can do.

All in all, it’s a fine piece of software that does all the things you’d expect.

Should I buy the Logitech G413?

If you’re looking for a £100 keyboard, this is the model I’d wholeheartedly recommend. The Romer-G switches, attractive and robust design, USB passthrough and decent software make the G413 a terrific all-round package.

There are strong rivals at this price point, however. The HyperX Alloy FPS has dropped to £80 and does nearly everything the G413 does, aside from the active USB passthrough (the HyperX can only charge devices over USB). The Corsair Strafe line is also very strong, and comes in at just under £100 while featuring a USB passthrough and a variety of Cherry MX switches.

The best gaming keyboard you can buy for £100.