The Logitech G203 Lightsync is the perfect mouse for casual gamers on a budget. It’s hard to argue with the raft of features on offer for the money, especially the decent 8,000 DPI sensor, uber-bright RGB lighting and comfortable shape. That being said, more competitive gamers should steer clear.

There are many PC gamers out there that will have you believe you’ll need to spend around £100 for a good-quality gaming mouse. Logitech dispels that myth, with its updated G203 Lightsync mouse seemingly offering a great gaming experience at a fraction of the cost.

The Logitech G203 is a wired gaming mouse that, much like more premium options such as the G502, has been a consistent part of Logitech’s product line-up for what feels like centuries – and this new version brings with it some more flashy and advanced lighting.

Logitech has gone back to basics when it comes to other features, though, with a respectable 8000 DPI sensor and a six-button setup appealing to both peripheral purists and those on a tight budget.

The G203 Lightsync is available from Logitech’s own website for the sum of £34.99/$39.99/€39.99, although is also available from other outlets at a somewhat cheaper rate, sometimes as low as £18.99 in the case of the Currys PC World eBay outlet.

The older G203 Prodigy is also available from other retailers, although was showing as “no longer available” on Logitech’s own website at the time of writing.

Unlike competitors at this price, such as Razer’s Viper Mini, Logitech’s G203 Lightsync isn’t going to set the world alight when it comes to its design. Some might say it’s uninspiring, but I personally don’t see the point of change for change’s sake: the G203’s design is classic and simple.

Constructed from hard-wearing and sturdy plastic, the G203 Lightsync is well built. This is also reflected in its 85g weight – while some 20g heavier than Razer’s dinky competitor, the G203 is still pretty light for a mouse of this stature. 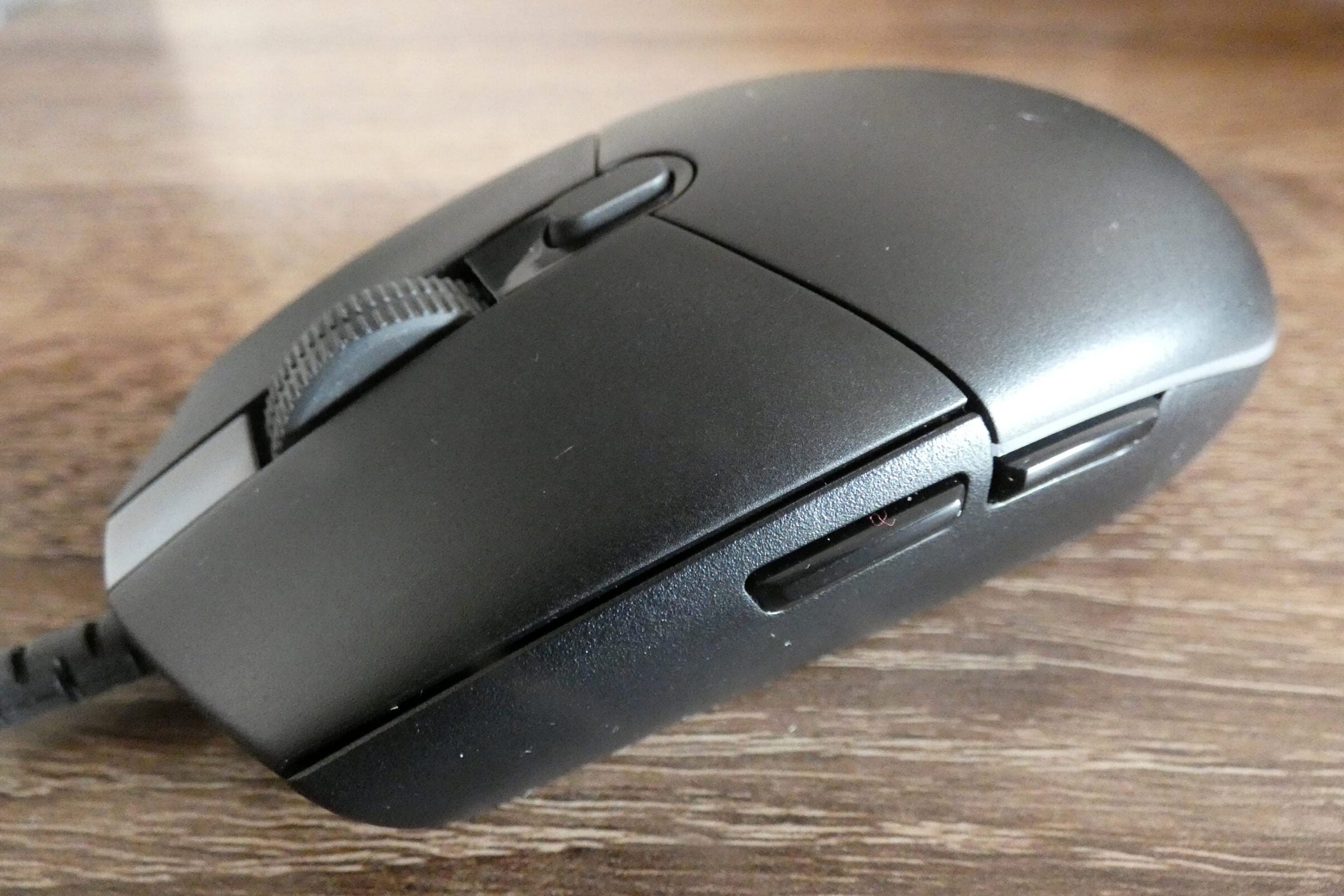 The G203 Lightsync also looks the part with its symmetrical design, meaning it’s good for those who like their mice to follow a simple template. Note, though, that the design isn’t ambidextrous.

Offering six programmable buttons – both gaming-orientated and not – the G203 Lightsync is similar to many other mice at the price. Its buttons are nicely firm and tactile to the touch. And, even with a lack of rubber grips on the side, the G203’s symmetrical design has been built with ergonomics in mind, and that overall shape makes it a joy to use. To some, it might be considered a little bit narrow, but it fitted my hands perfectly.

Where the G203 Lightsync does win against other budget mice is with Logitech’s decision to make use of a higher-sensitivity 8000 DPI sensor, which provides ample speed for casual gamers. Given the price, there’s no expectation for Logitech to provide a mouse with the zany sensitivities that more expensive and specialised mice come with.

In playing FPS games, the combo of an 8000 DPI sensor and a DPI shift (that can be enabled in the settings) made the G203 Lightsync a competent gaming mouse in my experience. 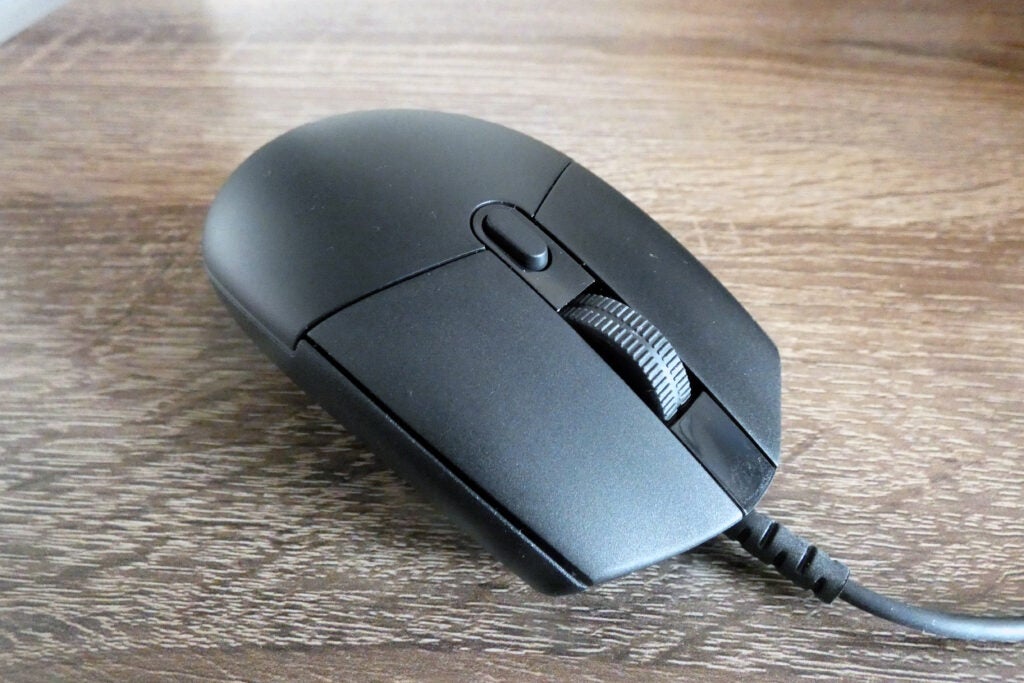 This peripheral also has all the makings of a decent little office mouse, especially with a maximum out-of-the-box sensitivity of 3200 DPI – it’s only adjustable up to 8000 via the additional software. This 3200 DPI figure is more comparable to Logitech’s office-specific mice that live outside of its G suite, which is designed and made with gaming in mind. Given its small size, the G203 Lightsync also makes a decent travel mouse, especially given its 2.1m cable.

The G203 Lightsync also incorporates what Logitech calls “optimised button tensioning”, meaning that the two main mouse buttons feature a metal spring-button tensioning system built in. In day to day use this translates to the G203 Lightsync featuring tactile and nicely clicky mouse buttons, which makes a change from other cheaper mice that give the feeling of pressing down on an oversaturated sponge.

It’s on the lighting side that this newly released Lightsync version of the classic G203 makes the most gains in comparison to the previous G203 Prodigy. Here, Logitech continues with the original’s two lighting zones; that is the G logo and the strip around the mouse’s natural curve. However, that strip can (with the right settings in G Hub) be split further down into three different areas.

Out-of-the-box lighting is fully RGB with 16.8 million colours, making it perfect for those who love a bedroom disco. What’s more, it’s rather bright; in my experience, perhaps even a little blinding in darker settings. What’s more, Logitech’s ever-fantastic G Hub software unlocks endless possibilities with regards to customisation, not just for lightning. Obviously, there are options allowing you to fiddle with lighting until your heart’s content, including plenty of preset functions that should keep you busy.

As well as the traditional lighting presets of fixed colour or a colour cycle, Logitech has bundled in some of its more entertaining features with the G203 Lightsync. This includes the Audio Visualiser setting, which matches the backlighting to any audio playing via your computer. This is particularly useful for songs that feature thumping drums, although the overall execution on too fiddly a pattern is a little bit hit and miss. 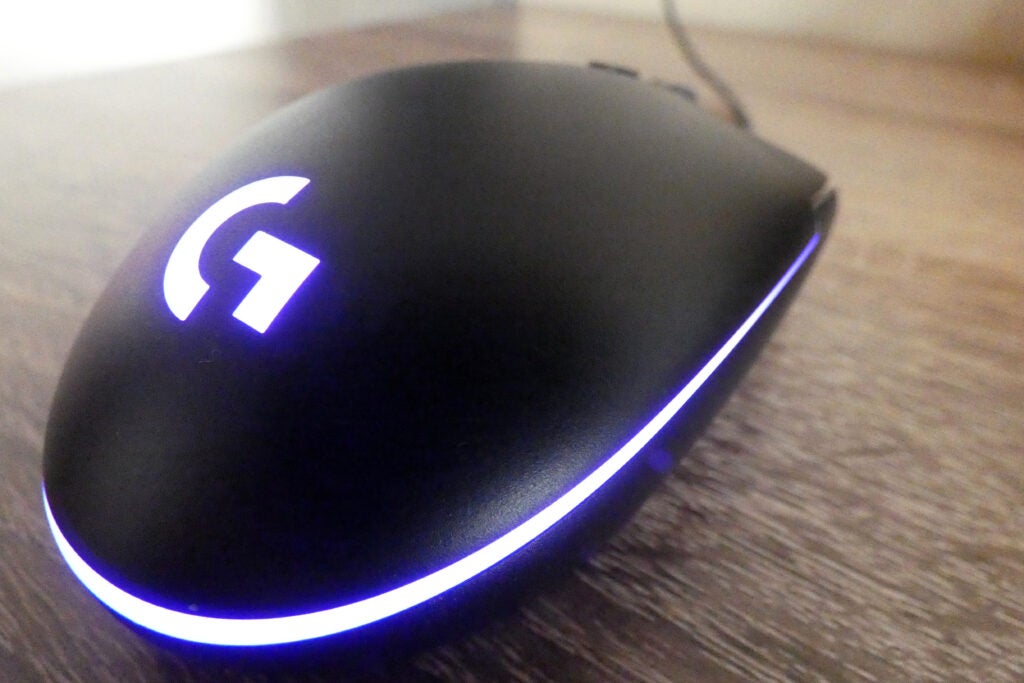 As mentioned, G Hub isn’t all about lighting – and along with seamless integration with the mouse itself, it also offers a host of features to improve your game. The maximum sensitivity of 8000 DPI can only be enabled through the software; otherwise, you’re stuck with 3200 DPI right out of the box.

This is employed in conjunction with Logitech’s DPI shift function, which aims to work like a DPI clutch to hold the sensitivity at a specific level when playing games that require a steady hand. This performs especially well when utilising a sniper rifle in FPS games, for example, helping to get that perfect shot lined up.

Do you need a USB dongle?

Can you adjust the weight of the mouse?

Is this mouse silent?