Livall’s second-generation Bling BH60SE cycling helmet gets smart with your safety, sporting eye-catching rear lighting and triggering an SOS text message in the event of a crash. You can send and receive calls from a linked phone, plus built-in speakers offer music on the move without headphones.

It works quite well, yet not without compromises. Music is effective but has no bass, calls are only possible at low speeds, and the bar remote is a cosmetic carbuncle. Crash detection and messaging is faultless, however, and the lighting is properly bling at night. Not an unqualified success, then, but certainly a contender. 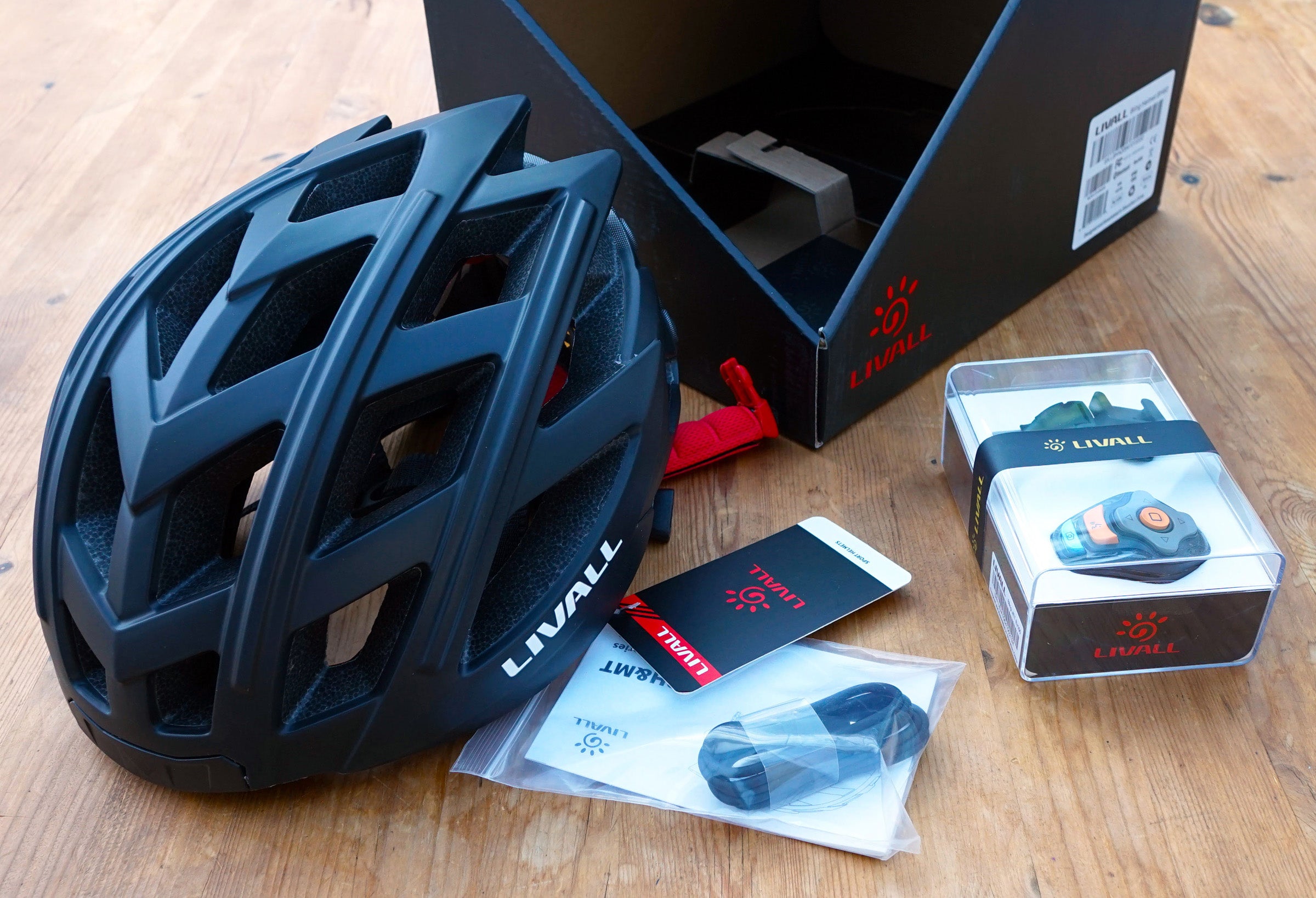 First up, let’s not forget that the Livall Bling BH60SE is a crash helmet. In the event of an incident, you want protection. The build is a typical polycarbonate shell over compressed polystyrene and it feels well put together. There’s a sweat/comfort pad of decent thickness, ratcheting size adjustment and well-spaced chin straps to avoid any ear chafing. Other than the alien-like pointy bits at the rear, it isn’t a bad looker either.

This model comes in one size fitting, claiming compatibility with heads from 55-62cm in diameter. The round internal profile meant it was tight front and back on my rather oval-shaped 61cm head. The sweat pad is ample, but the snug fit did leave me with an interesting shape imprinted on my forehead on removal. It fitted Jackie’s more typical 58cm head far more comfortably. It isn’t noticeably heavier than a normal helmet and the chin strap was comfy too. 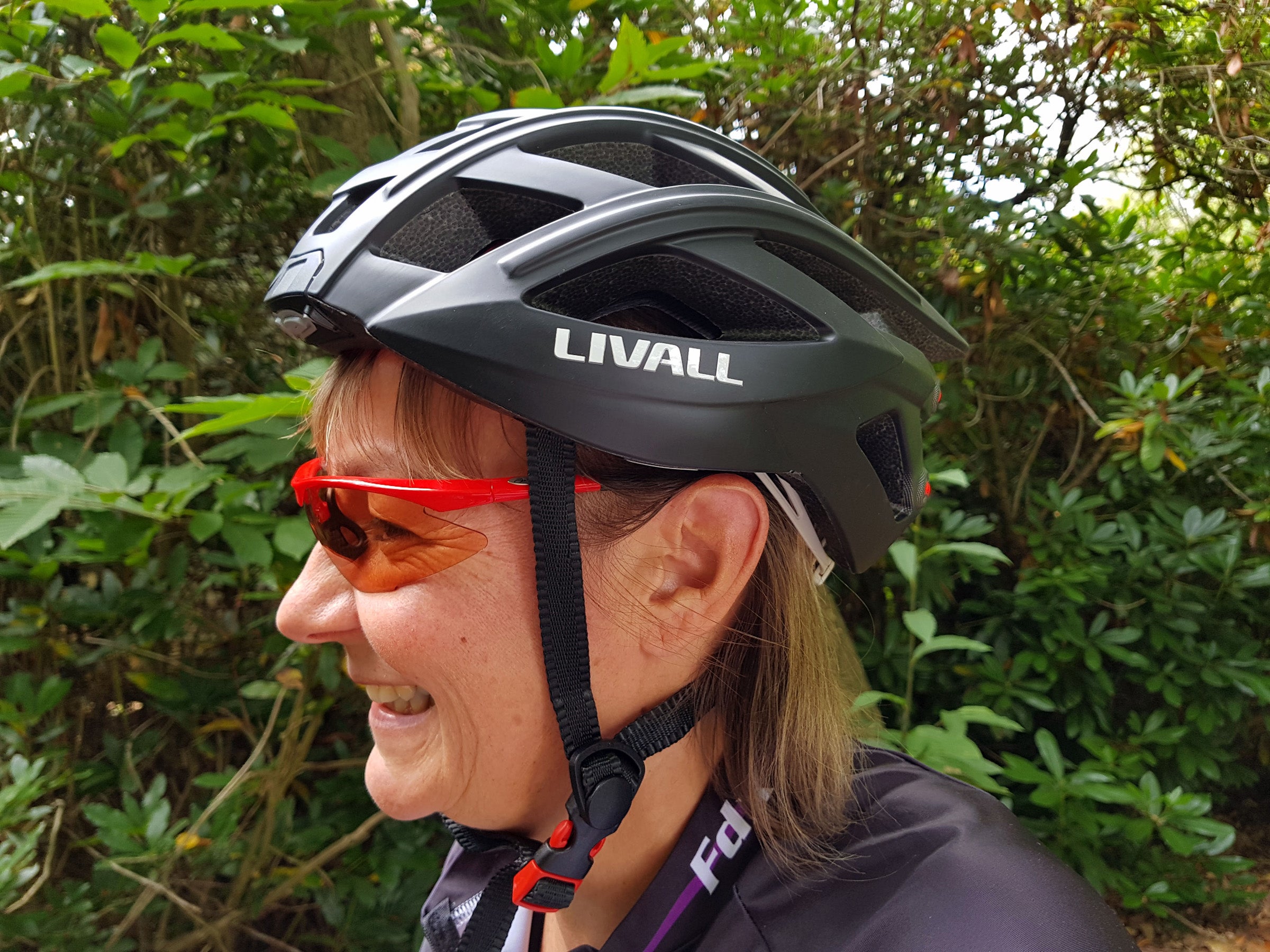 The smarts come in the form of an accelerometer, Bluetooth connectivity, LED lighting, mic and speakers. The mic sits beneath the front brow, along with a trio of control buttons and the USB charge port. Two speakers fire down towards your ears, promising audio goodness without having your peripheral hearing muffled by in-ear headphones. You can listen to music and receive calls all without breaking cadence.

The LED lighting is where the ‘Bling’ bit comes in. Within the app you can set the 14 LEDs to fade in and out, flash or pulse. The lower three LEDs on each side act as turn indicators, flashing orange when the left/right turn button is pressed on the cockpit remote. The same controls are available from the app should you have your phone on a bar mount. 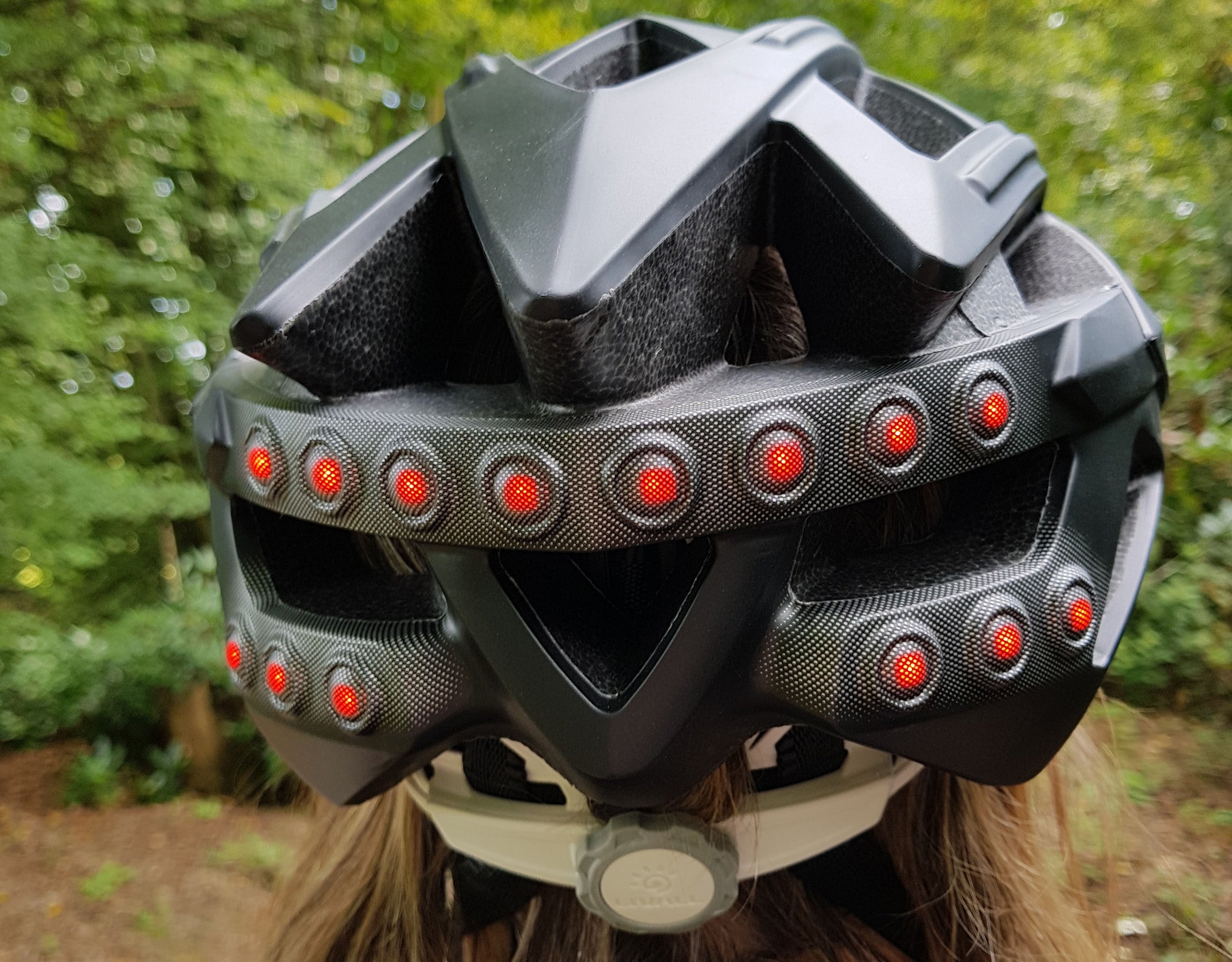 If you do end up falling off, the BH60SE’s built-in accelerometer promises to detect the impact and ping a text message with your location to a chosen emergency contact.

If you like a streamlined cockpit, the Livall Bling Jet remote control has all the visual subtlety of a small brick. The chunky ratchet mount is secure if not svelte, and the remote itself stands some 4cm proud of the bars.

The orange-backlit remote pairs with the helmet and app via Bluetooth. Key presses beep in the speakers and the helmet itself offers female voice notifications for power on/off, connections and battery warnings. 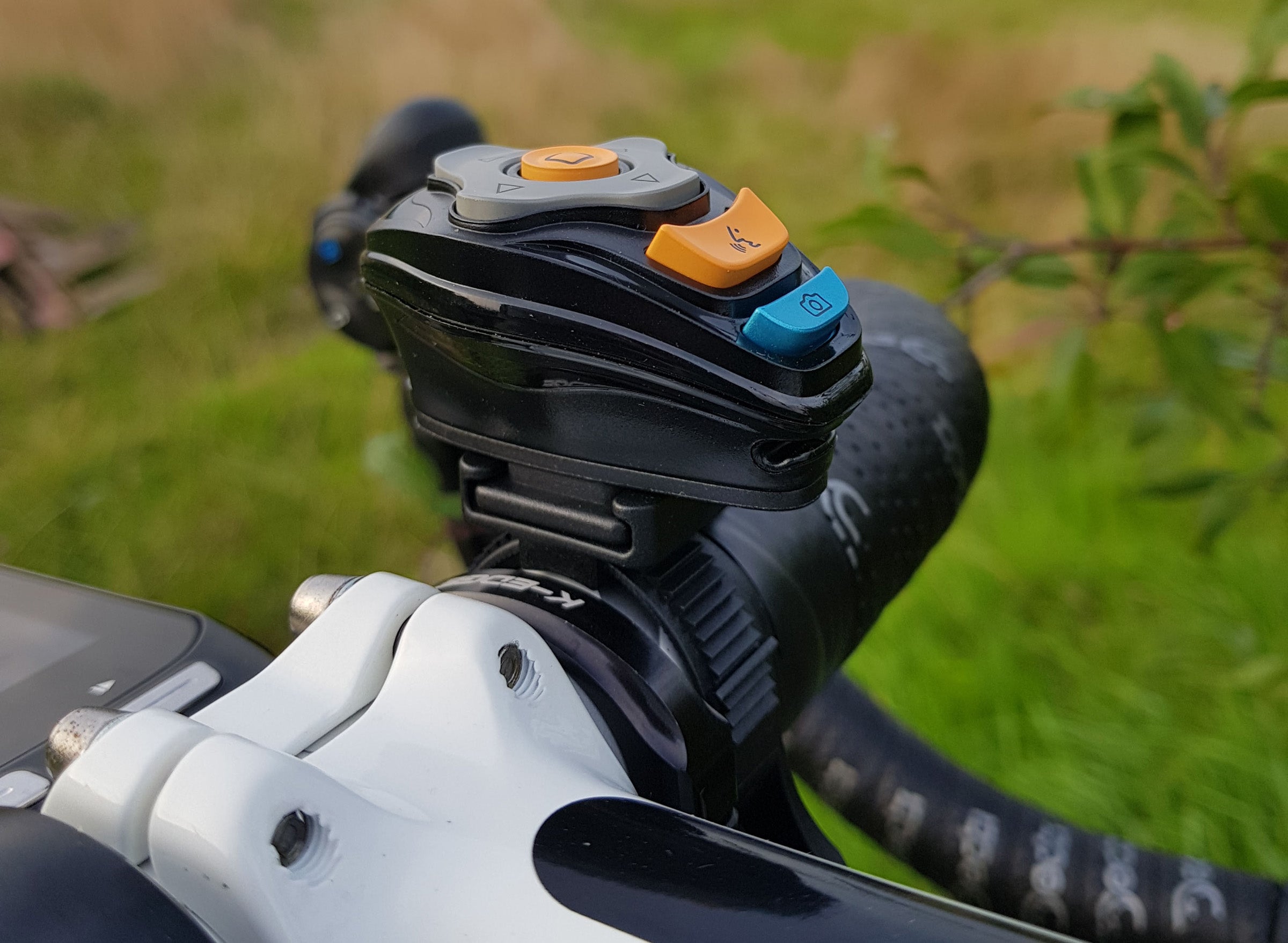 On the remote, left/right arrows trigger the turn direction via LED indicators that flash orange for five seconds. Up/down buttons on the remote skip forward and back through music tracks, and the central button pauses music or answers a call. The orange button below opens the phone’s mic channel. You can then use a voice service such as OK Google to pull up a contact and dial a number as you pedal.

The camera button triggers your phone camera app to open and a second press takes a picture. That’s really useful if you want a picture of the inside of your jersey pocket or front wheel if your phone is on the bars. It did make selfies a bit easier, though. 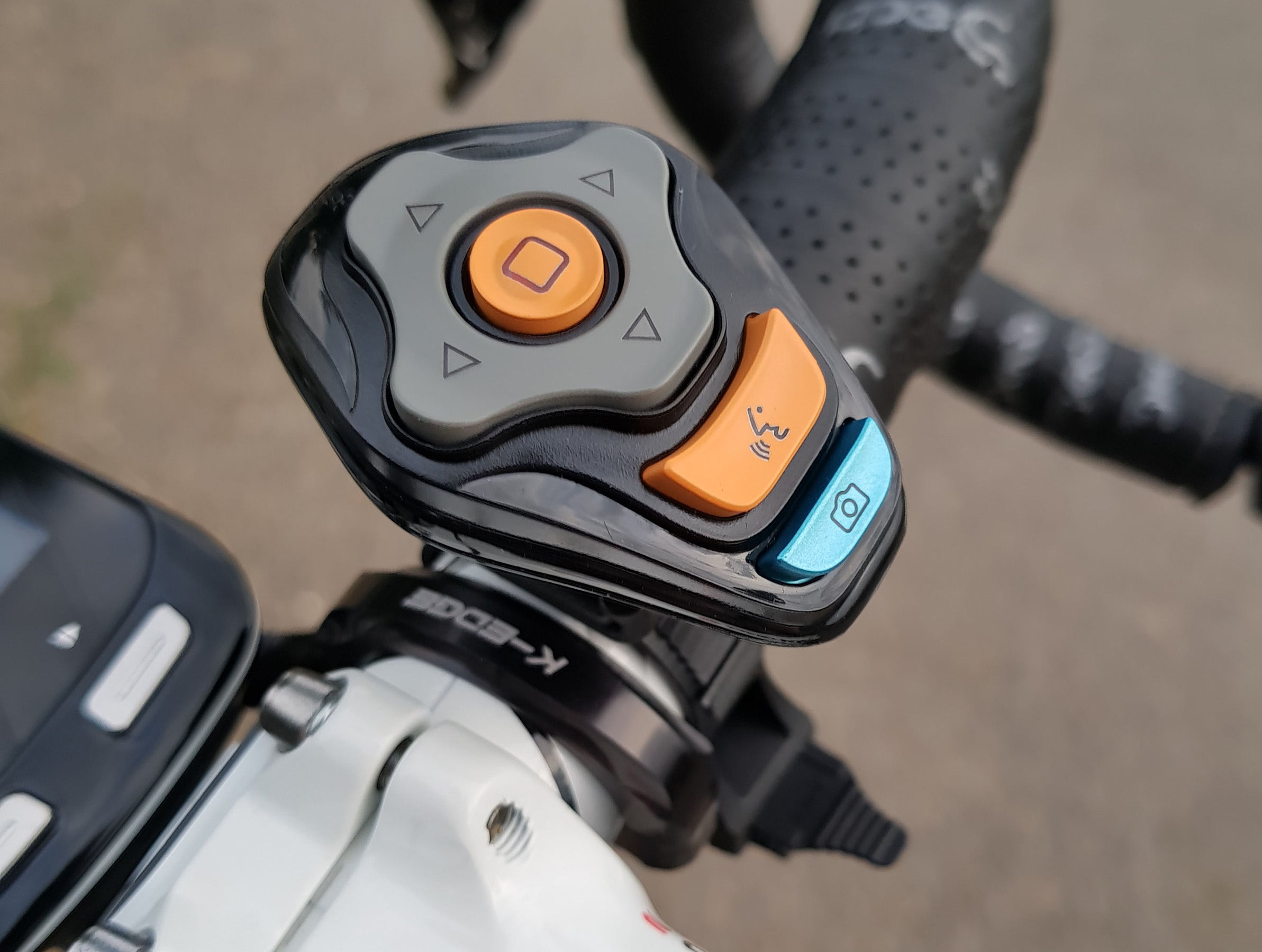 The Livall app is fairly basic. It’s trying to be Strava, meshing data collecting with a ‘group’ social platform. You can pair it with an HRM and cadence sensor for better activity metrics, review your rides and embed pictures. 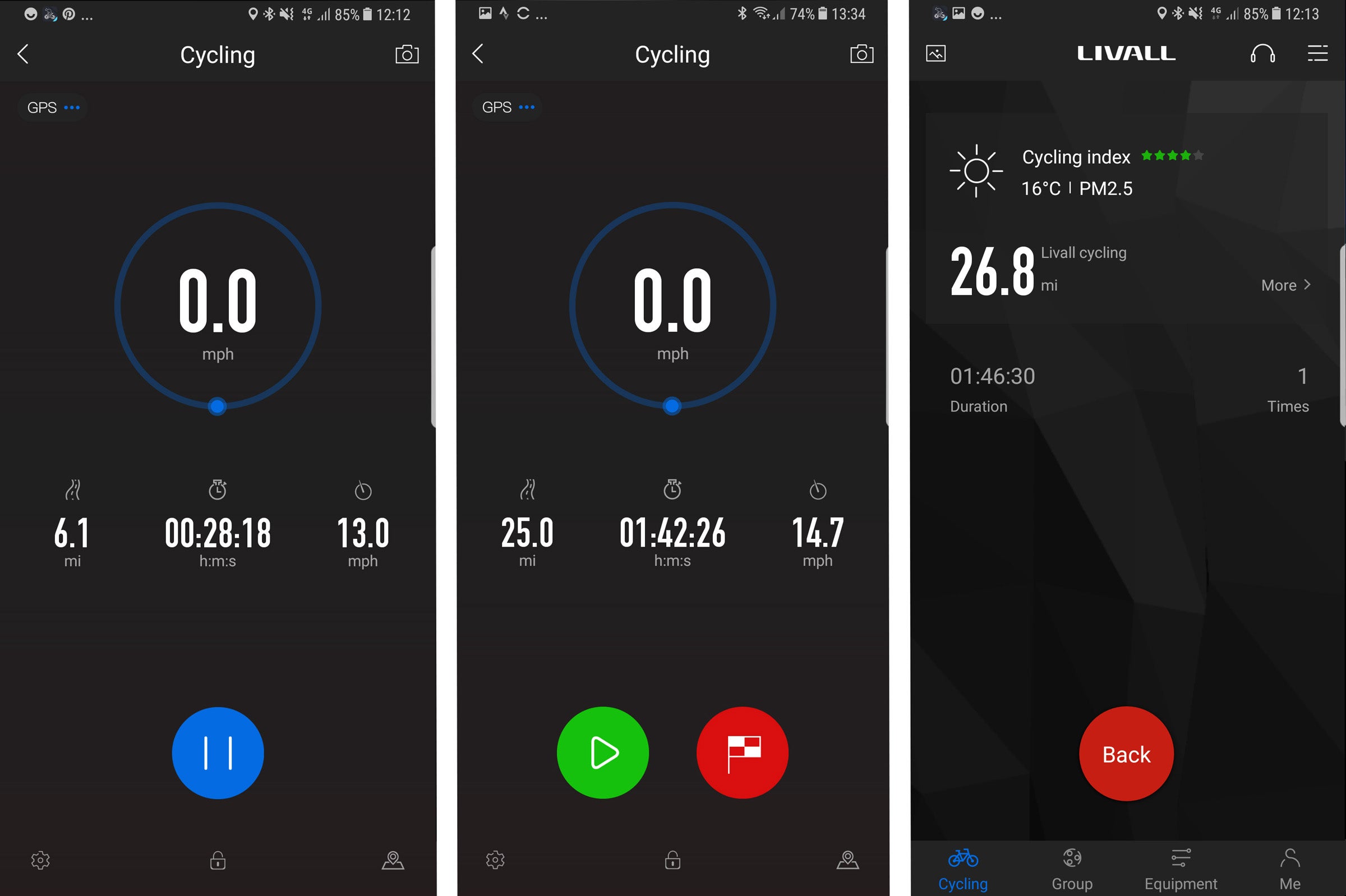 The trouble is, aside from setting up your SOS contacts and altering the light pattern, the Livall app doesn’t do anything new. Most activity tracking apps offer much more and present the data better too. 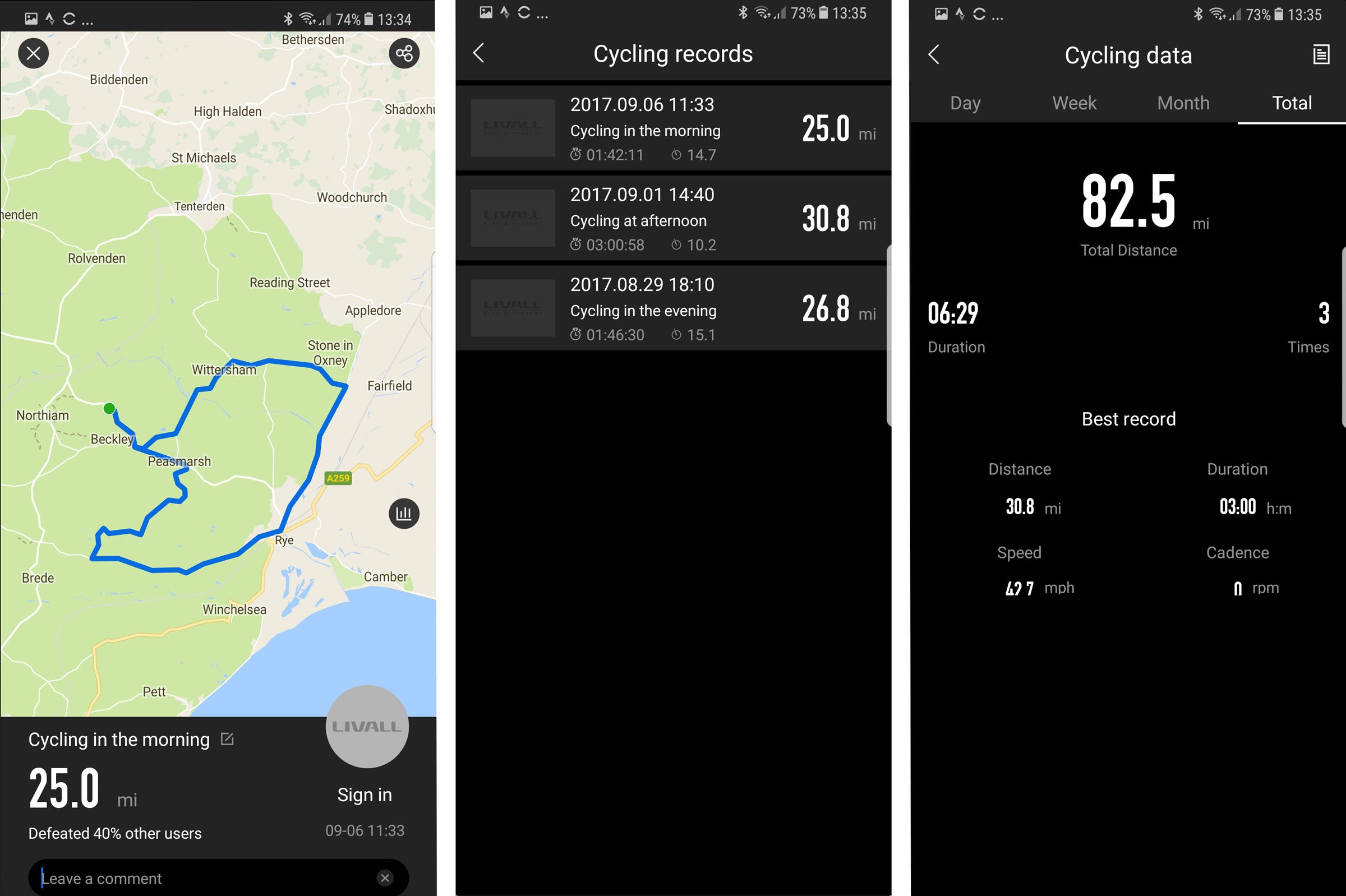 Wearing headphones while riding a bike isn’t advised. It’s right up there with drink driving, if you ask some road users. I don’t like the sensation of not being able to hear the world around me on the bike, but it’s a matter of personal choice. Unless you have a Livall Bling Helmet, of course.

Music can be sent to the helmet speakers from any player on the paired phone. Volume is adjusted in the phone or using the +/- keys button on the helmet. The sound is, well, not too bad actually. 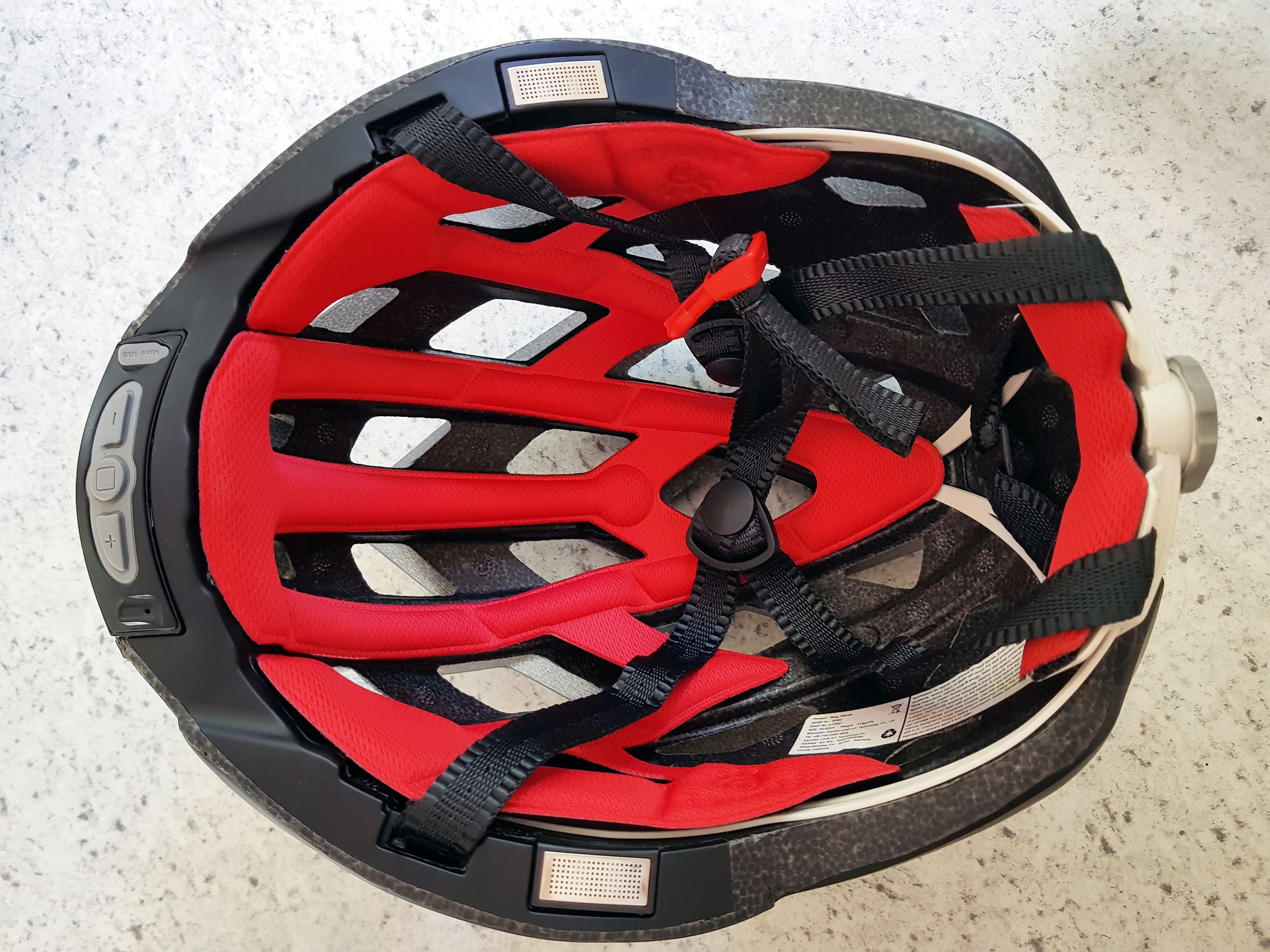 Given the size and power of the little speakers, it’s no surprise that things are a little ‘tinny’. There’s no bass at all. Cleverly, though, it’s attenuated before it gets to the speaker, so you can go almost full volume without the little drivers distorting. This results in a fair output, too. Okay, we’re not talking proper in-ear headphone or concert level volumes, but more than enough to hear the music as you roll along.

The same is true of phone calls. The helmet delivers crisp and clear voices. I could easily hear the caller, even when the wind noise was high, travelling at over 30km/h. The trouble is, they couldn’t hear me.

The front-mounted mic suffers from wind-rush noise. If you’re travelling more than about 12-13mph, the caller simply won’t hear you over the noise. Ride into a head wind and that cut-off speed is even lower. 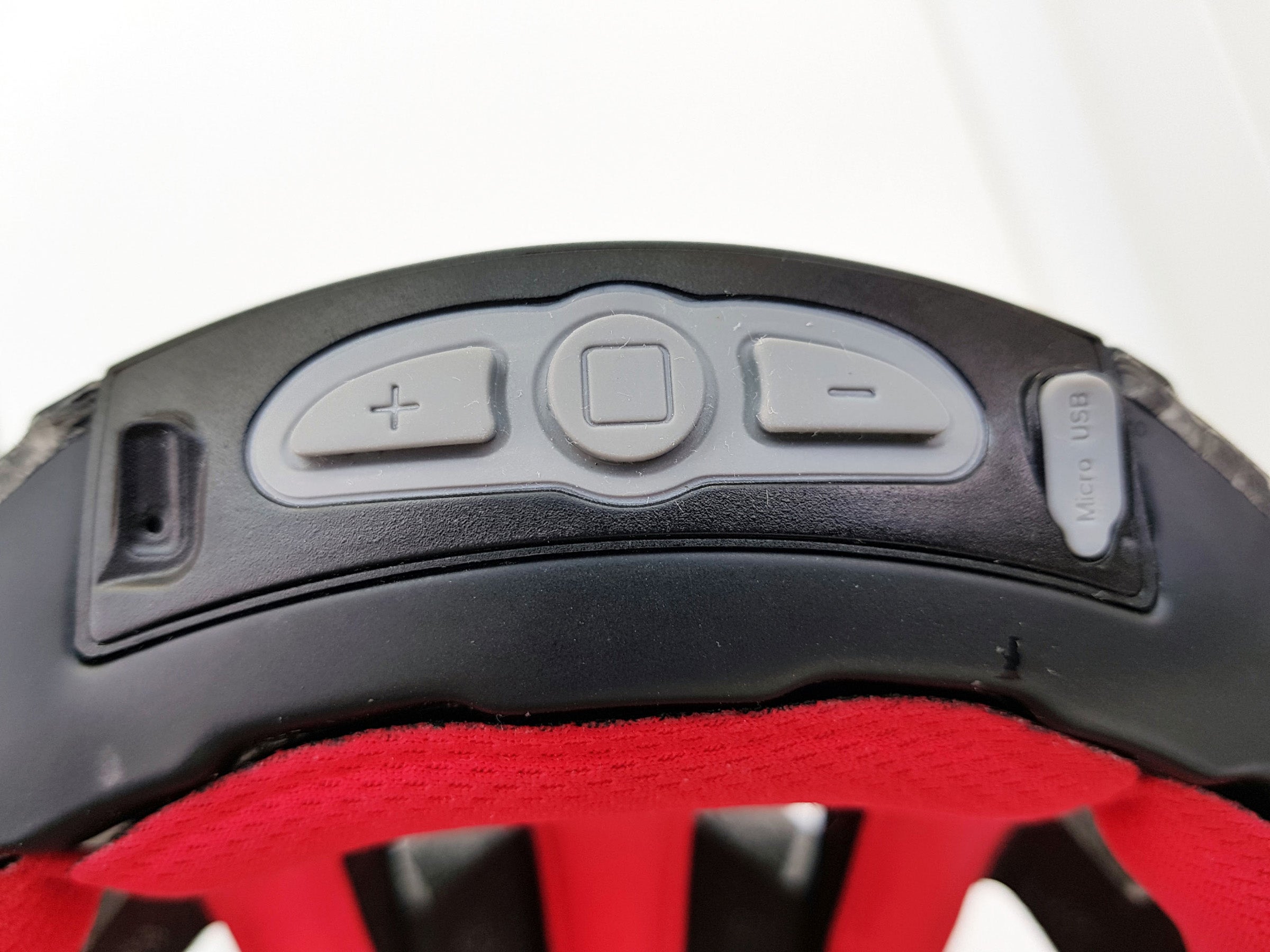 Trying to call someone using OK Google suffered the same fate. Poor old OK Google didn’t have a chance differentiating between my contacts when I sounded like I was wing-walking on a bi-plane. Given the vagaries of OK Google anyway, the multiple wireless connections involved and the wind noise, the success rate wasn’t high.

Yet take the Livall into town on a commute and it makes far more sense. Lower speeds, frequent stopping and the sheer convenience of not having to get your phone out when someone calls is super-handy. OK Google calling worked better when stationary at traffic lights too. (You do stop at traffic lights, right?). For the commute to work or bike couriers, I can see this helmet’s music and comms abilities being a real boon. On a fast club road ride, less so.

Setting up the SOS involves creating a Livall account and entering some emergency contact details of a nearest and dearest. Or at least someone close by with first aid skills. 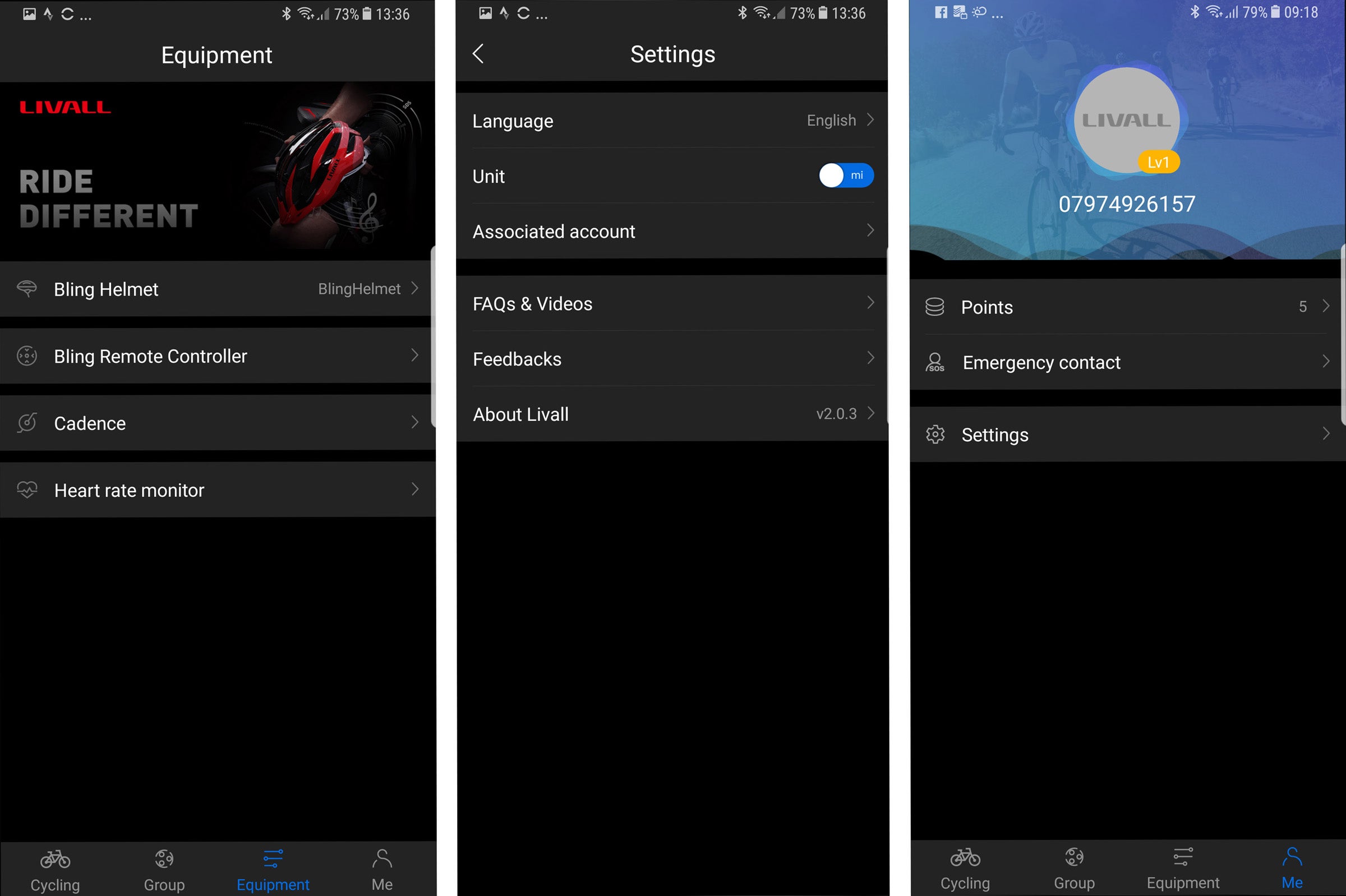 If the helmet takes a bash, a warning pops up on-screen for 90 seconds. If you don’t respond to that, the phone then pings a text message with your location details to the emergency contacts.

And by bash, we do mean a proper accident-level bash. Just dropping the helmet at the coffee stop won’t trigger it. Nor did thumping it quite hard against my thigh. Throwing caution – well, the helmet – to the wind, a 5m/20ft hurl into the air dropping onto grass did trigger the warning. The 90-second countdown ensued.

The message read: “Your friend “phone number” fell off his/her bike!” followed by a hyperlink. That takes you to a map page with a pin locator, address and an addendum to the same message saying: “Please hurry to help him/her.” I should have probably told the wife I was just testing the feature, though. The BH60SE’s quite literally Bling array of LEDs promises safety illumination to the rear without having to strap a lamp onto your seat post. However, they simply aren’t bright enough for day use. Fewer but brighter LEDs would have been a better bet.

At night, there are no such issues. The flashing patterns are nothing if not eclectic, and anything a bit different is likely to attract attention – which is the point, of course.

The turn indicators didn’t wow, though. You have to take your hands off the bars to press the button on the remote, so why not just stick your hand out? At night, I do wonder whether other road users are going to get the message. Being so close to your centre-line, will they just look like another flashing bike light? Probably. 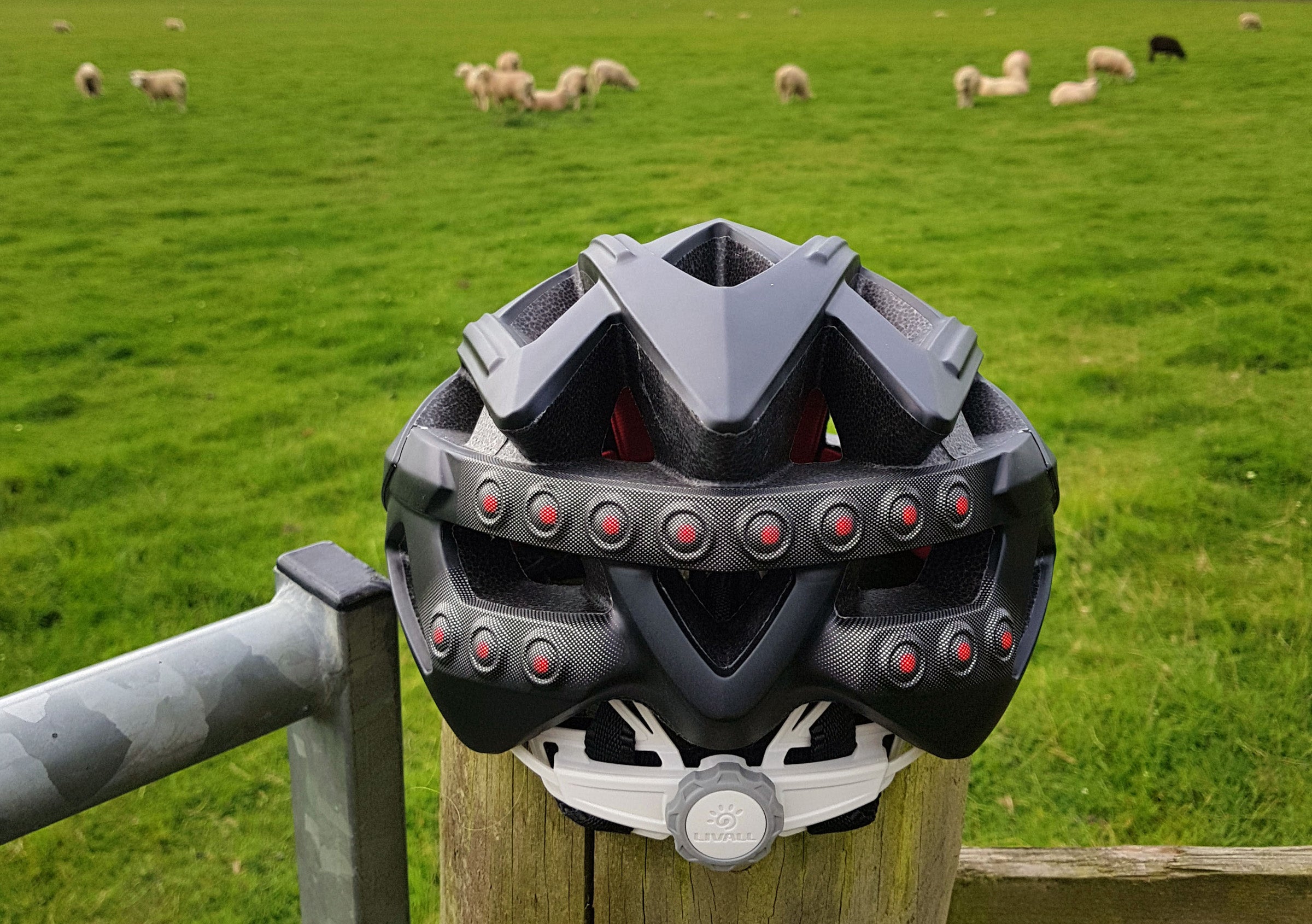 Sadly, that’s it for light trickery from the BH60SE. We’d have liked to see the accelerometer used to offer brighter ‘brake’ lights when slowing, for example.

On the plus side, the not-so-dazzling LEDs don’t trash the helmet battery. From a three-hour charge we got a solid eight hours of lighting on the default Bling pulse setting. That drops with music and phone use, but not by as much as we anticipated.

I managed a three-hour ride listening to music constantly, and the helmet went on another 30 minutes after I got back. Had I created a playlist of more than five songs on repeat, that would have been really impressive. 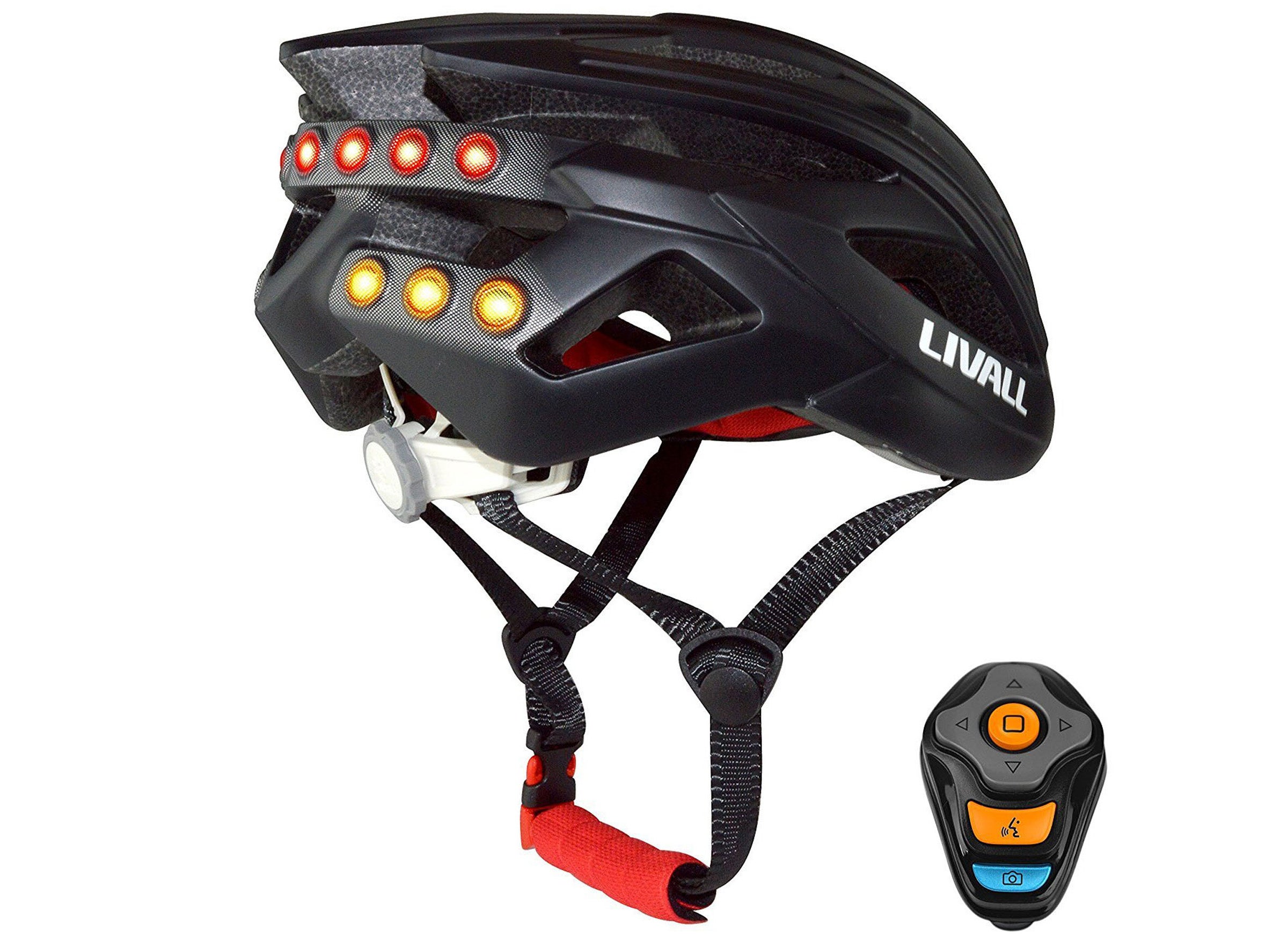 The Livall Bling BH60SE is a bit of a flawed gem. It has a rich list of features but a peloton of caveats following close behind.

The crash-detection SOS message is cool, even if it can be replicated by a number of basic phone apps. You can play music for hours, as long as you don’t mind the lack of bass, and you can make/receive calls, as long as you’re not peddling over 12-13mph.

The lights are a handy addition to your safety armoury at night, but not really bright enough for use in the day – and the indicators polarise opinion. I wouldn’t want to rely on other road users getting the “I’m turning” message from the BH60SE’s indicators alone, not until such helmets become more prevalent at least.

The app is okay for setting up the emergency contacts and light pattern, but dedicated cycle tracking and group social apps are more richly featured. The remote works well, if you can stand its clunky shape and size on your bars.

The BH60SE if far from perfect then, but at around £99 it’s no pricier than a decent standard helmet. For commuters looking to catch some tunes on their way to work, calls on the way home and for an added layer of extra safety, it works well.

The BH60SE’s music and phone integration is great for commuters, and the SOS feature works well – but wind noise in the mic limits its all-round appeal.