Available on PS4 and PS3
LittleBigPlanet 3 is the first of the cutesy series entries to grace the PS4, and this time round the big focus is on the introduction of three new characters.

Along with the ever loveable Sack Boy, LittleBigPlanet 3 introduces Oddsock, Toggle and Swoop, three brand new friends each with their own specific skills. Oddsock “The Swift” is a little dog-like creature who runs on all four and is incredibly nifty. He can also run up walls and wall-jump to reach higher areas.

Toggle is a special one, as he can shift between a larger, heavier chap who is useful for triggering switches or smashing through windows, and a smaller, daintier fellow who is much lighter, can run on water and fit through tiny gaps.

Finally, Swoop is your brand new flying friend. He can fly around the worlds and use his glide ability to fly quickly through treacherous passages or lift things up to higher ground. 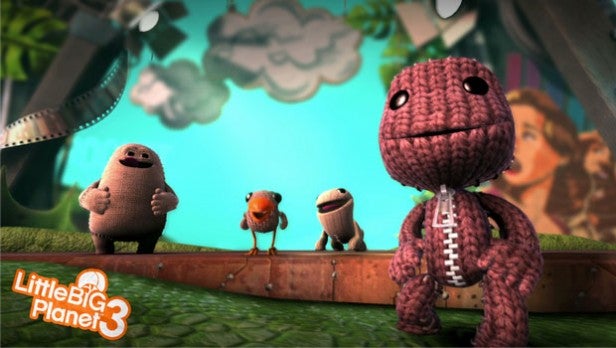 What we were most excited about for LittleBigPlanet 3 was working out how to switch between the four characters to best progress through the levels and discover all those hidden bubbles.

However, that’s where LittleBigPlanet’s first hurdle is. Within the main single-player campaign you work your way through the world of Bunkum to stop Newton and the Titans from taking over the world. To do that you must release the three heroes – Toggle, Oddsock and Swoop – from their various worlds, one at a time.

First you’ll need to go get Oddsock from Bunkum Lagoon, then Toggle from Bunkum Swamp and then Swoop from the Ziggurat. Once you’ve released the characters, you can swap between Sack Boy and the related hero in each world, but only at a designated portal located in the main area.

The only way you can switch between characters freely is in custom created levels available in the Community section of LittleBigPlanet 3 or if you create your own. There are some, albeit well hidden co-op missions where you can play with up to three of your friends, all taking on a different character to complete challenges. 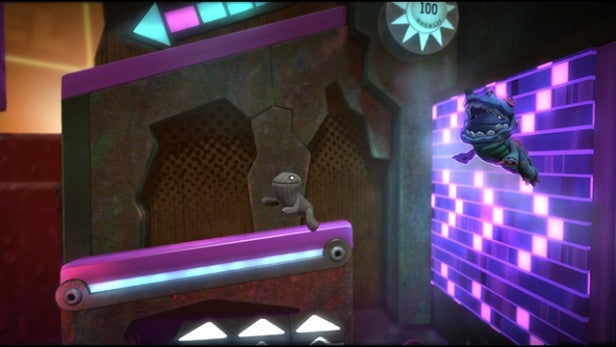 Part of that seems to come from the level design of LittleBigPlanet 3. Each main hub and its subsequent quests and side missions is designed specifically for a single character, whether that’s Sack Boy or one of the new heroes. It’s not until the final two missions that you have sections where you are forced to play with each character in turn.

That’s not to say that the level designs are dull, though. Far from it. As with previous LittleBigPlanet titles, each level has been lovingly crafted, all with the tools and objects that are available to Community LBP Creationists too. Each world has a distinct feel and lead guide. Bunkum Lagoon for instance sees you guided by the rather theatrical Marvin Random and each level has a strong American theme, whether that’s a casino, the Wild West or a particularly stunning level that sees Sack Boy zoom through space with sections in zero-gravity. 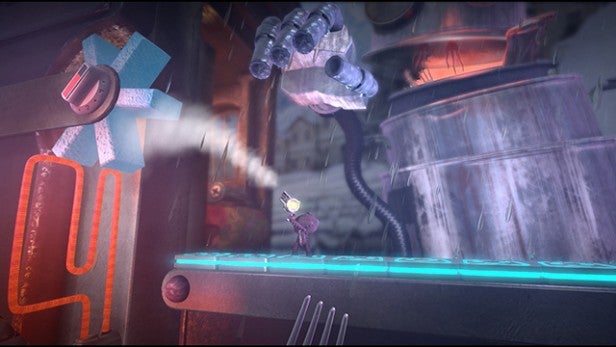 LittleBigPlanet 3 also has another unique feature and that’s the Sack Pocket. Sack Boy is given this Sack Pocket early in the game, accessible by pressing circle, and throughout the game it is slowly filled with a variety of gadgets that must be used to fully complete each level.

There are five in total, but you’ll only be given four of those within the campaign: the Pumpinator, Blink Ball, Hook Hat and Boost Boots. The fifth, known as the Illuminator – a torch basically – will be gifted to you by ZomZom the Store Keeper, when you’ve purchased four outfits.

Overall, you won’t really need the Illuminator. The other four, though, are key to the way the levels are built and change the way you interact with the world as a whole. The Pumpinator allows you to use wind power to suck or blow blue foam-covered objects to new locations or to trigger switches. The Blink Ball acts a little bit like a teleporter, which to us seems like a nod to Portal. You use R1 to fire a small ball into a green rippling patch on the world to transport Sack Boy to new areas.

The Hook Hat lets you attach Sack Boy by the head to grind rails and finally the Boost Boots let you have enhanced jump reach to discover the more vertical levels. 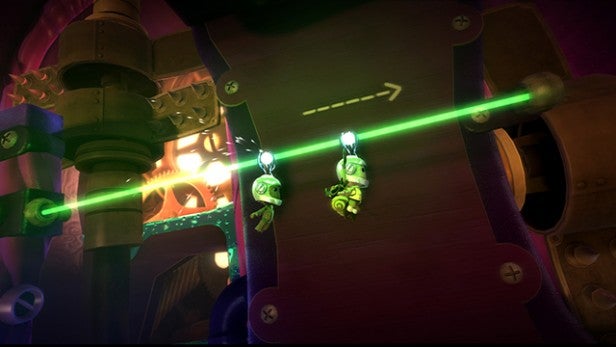 You are given a short tutorial each time you are given one of these new gadgets, giving you a bit of time to get to grips with them. However, if you are playing the campaign missions in co-op, which is totally possible, you won’t be given the mid-level introduction to the gadgets, meaning you need to work them out for yourself, or get your friend to explain if they’ve already experience that particular bit of kit.

The way the gadgets have been executed adds another layer to the platforming of LittleBigPlanet 3. It’s a welcome element of variety from the usual jump, grab and push mechanics.

You’ll often notice that there are parts of early levels that you can’t reach. Later on when you have all the gadgets at your disposal, it becomes evident that you can reach those previously inaccessible areas with your new toys. Therefore, as with previous LittleBigPlanet games, there is tonnes of replayability for every level, as you’ll be able to go back and get all the collectibles from each one with your new gadgets. 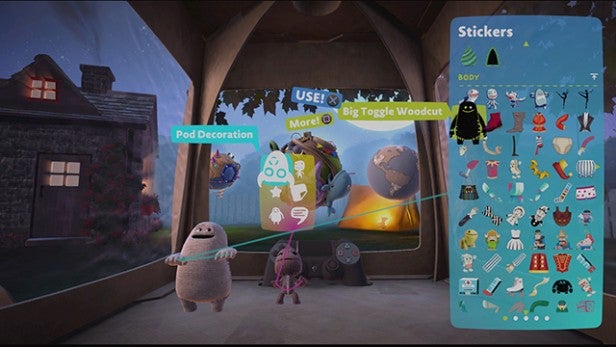 LittleBigPlanet 3 feels like it has the most cohesive and immersive storyline of all the instalments. Earlier titles would force you to head back to the map to select the next storyline mission or one of the side quests. Instead, you are transported to the main area, and all side mission, co-op, store and storyline content is accessible from there, just by running around the level and discovering the portals.

It feels much more like an established title by doing it this way. You can still go back to the more traditional circular map view if you so wish, but you’ll only be able to access content you’ve discovered in the hubs from the map.

However, despite the fact that it feels more self-contained, LittleBigPlanet 3 still suffers from very long loading times. Moving from hub to side missions or storyline levels can incur wait times of over 35 seconds (we counted), which can be a frustratingly long time, especially if you are simply restarting a level that you were already playing.

What’s also annoying is that you can’t skip cutscenes at any point, even if you’re simply revisiting an earlier level. It might be important for gamers to listen the first time, but there should be an option to skip the babble the second/third/fourth time around. 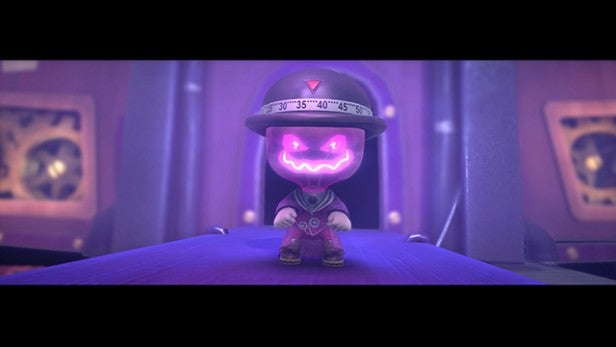 LittleBigPlanet has never been well-known for its long storylines, but LittleBigPlanet 3 does seem to finish a lot more quickly than even we anticipated. You have four main worlds, the three we originally mentioned and a short prologue section, but that’s it.

You’ll collect Swoop and then suddenly you find yourself in the closing pair of missions. And we warn you now, they’re evil. The rest of the levels have been challenging at times, but suddenly it feels like the developers reliased the main campaign wasn’t that long and subsequently turned on a switch to make the last two levels feel a whole lot longer. That’s because they’ve ramped the difficulty up to never seen before levels.

Plus, if you happen to die more than five times on one section – which you will, repeatedly – you’ll be taken right back to the beginning of the level. Those last levels get to the point that you’ll want to throw your controller, or at least turn the PS4 off and perhaps not come back.

The first of the last levels was also not helped by the fact it has quite an annoying bug. Everytime we switched to little Toggle, he turned invisible, meaning that we had to guess where he was on the screen. In a level where timing and precision is everything, it more than contributed to the controller throwing frustrations. 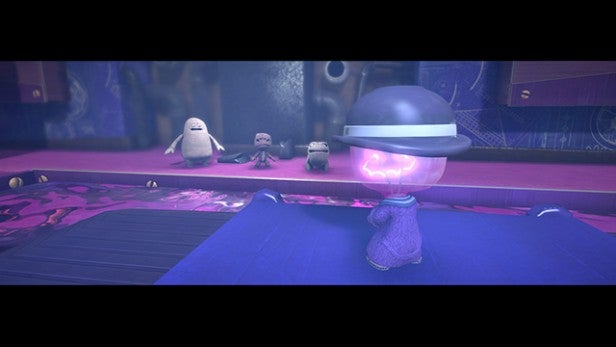 Of course, to extend the storyline there are of course the millions of custom created levels in the Community section. All those built in LittleBigPlanet 2 and the original game have been carried across to LittleBigPlanet 3 and there is a vast cavern of levels crafted during the LittleBigPlanet 3 beta to explore too.

But, rather worryingly, there’s an option beneath the Adventure button in the hub that says “More Stories”. That option takes you directly to the PlayStation Store, to a page that isn’t yet live in the UK and won’t be until November 28. However, it seems that in order to extend your storyline with more developer created content, you’ll need to spend even more money than your original £47.99 investment.

The creation tools have been revamped in LittleBigPlanet 3 though, and with the strong community creating all the time, it’s possible that you won’t even need to touch that Store button. 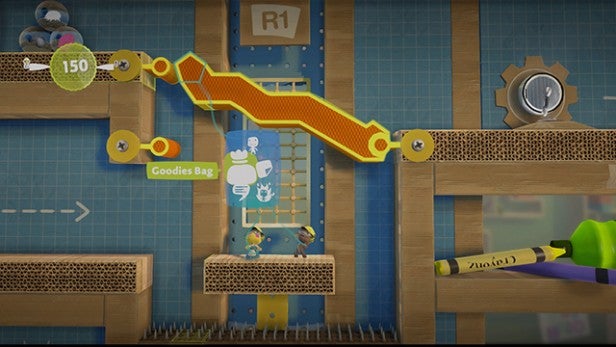 If you’re new to LittleBigPlanet you can just play through those levels created by seasoned pros, but there’s a new feature that will help you get to grips with the Creation Tools and that’s the Popit Puzzles. These are a series of eight mini-games that will teach you to how to create worlds one baby step at a time. They’re perfectly created, introducing you to just enough new skills each time that it doesn’t feel like a bombardment.

For those familiar with LittleBigPlanet level creation, there are a host of new tools to take advantage of. One we had particular fun with is the Blaster Handle, which lets you create your own Power Ups. The only limit to these really are your imagination.

You can also create your own adventure mode, by creating your own World Map with levels that link together with unique Power Ups and custom characters to boot. You can even create your own weather systems too.

We have to say we’re not the most skilled at LittleBigPlanet level creation, but taking a look through the Community Hub shows you what is possible with the game. LittleBigPlanet 3 gives creative types the most tools to date and allows a never seen before level of freedom.

Verdict
It seems disappointing that new developer Sumo Digital didn’t take the time to really make this a definitive LittleBigPlanet entry. Long loading times and slightly restrictive campaign levels are holding LittleBigPlanet 3 back from being a fantastic game for players of all ages. Co-op is still as enjoyable as it always has been, but there’s not enough of it in the base game for you to appreciate all the characters.

Thankfully, there is a lot of replayability to explore and more than enough Community content to keep you busy for hours. And the level and character design still appeals to eyes and ears and looks fantastic on PS4.