‘Roads’ is a heart-breaking leg of an emotional journey that never feels limited by its medium. I’ve played seasons of other choice-driven narrative games that had less emotion and heart than this five-hour odyssey. With Life is Strange 2, DONTNOD has upgraded and refined every element that made its forebear successful, whilst sprinkling some magical new additions into the mix to create an essential genre-pushing experience that isn’t just for fans.

“Kids always want to be adults… if only they knew!”

This throwaway line is uttered by a picnicking mother that you come across during the events of Life Is Strange 2’s first episode, but I feel like it encapsulates a lot of what the game is attempting to convey.

‘‘Roads’, the first episode in Life Is Strange 2, is about two main things; naivety and sentimentality. It’s a challenging, bittersweet cinematic adventure about growing up and facing the responsibilities that come along with that, framed through the story of two brothers who are far too young to be equipped to deal with their harrowing situation. That juxtaposition is, at its core, what makes this opening chapter to Life is Strange 2 so very special.

Starting out in Seattle, we say goodbye to Max Caulfield and Chloe Bishop, welcoming 16-year-old protagonist Sean Diaz and his younger, 9-year-old brother Daniel, your companion in this new journey.

The game quickly sets the scene. Sean is a relatable track star teenager who is trying to find his way in the world, experimenting with art, drugs, and girls and worrying about whether friendships will last as his education comes to a close. The two brothers live with their father Esteban, a mechanic and the emotional rock of the family which the brothers revolve around. 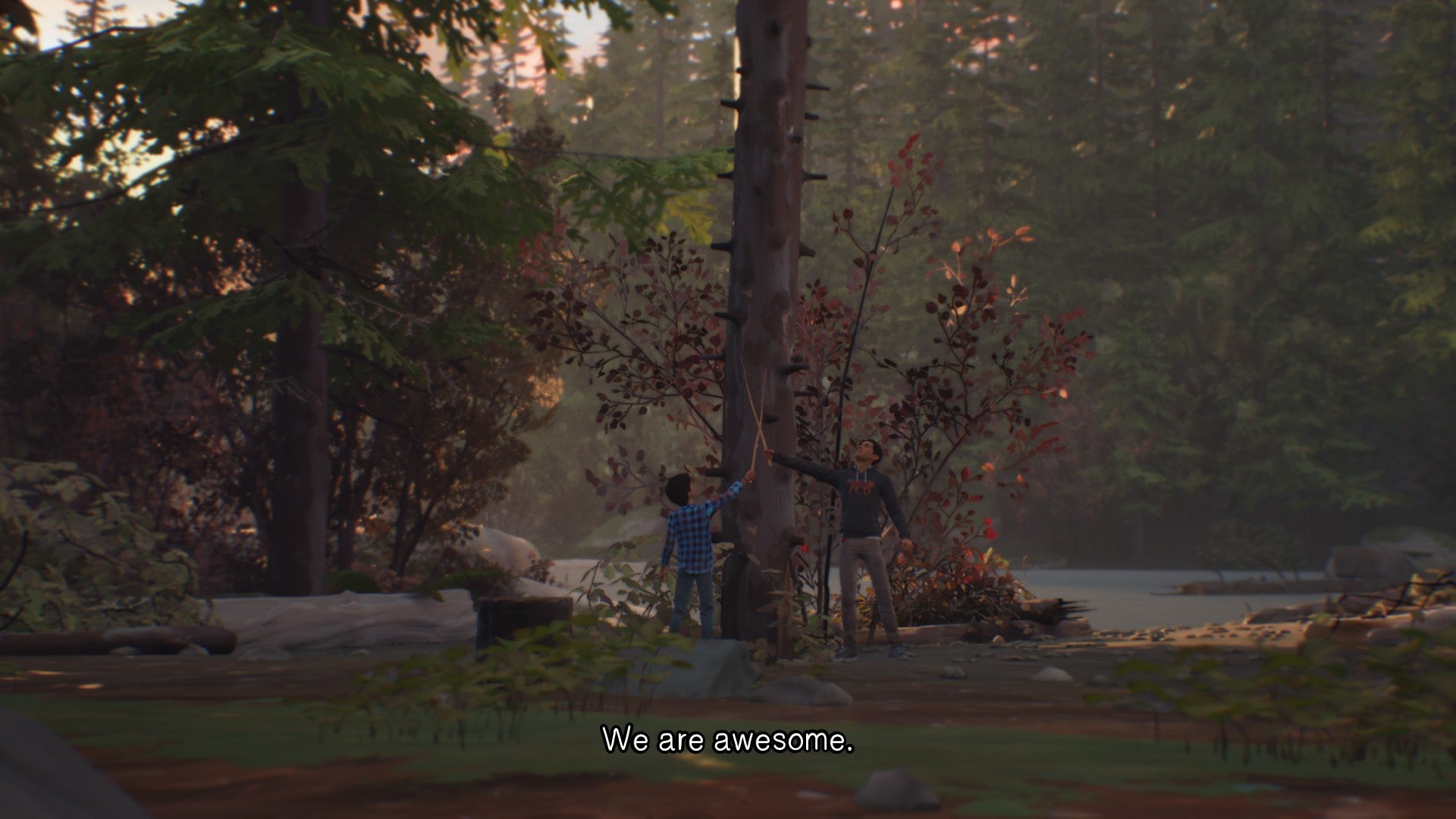 The playful dynamic of the Diaz family is quickly understood as you explore Sean’s home, collecting supplies for a late-night party. The series has had a serious graphical upgrade thanks to Unreal Engine 4, which means swathes of gorgeously textured storytelling objects, detailed journal doodles, and fluid, human animations that bring a new level of nuance to the narrative.

A messy whiteboard indicates a chaotic chore schedule… Invoices and tools reveal that Esteban is a workaholic. Sean sings along wistfully to The Streets in his room, and Daniel opens his door slightly after slamming it shut to make sure his brother won’t see his Halloween costume. It’s a living environment, more so than any seen in the first game.

The devil is truly in the details, and this is carried over to the dialogue. Sean can now react to ambient conversations during gameplay, much like the system seen in Night School’s Oxenfree.  This means that the game doesn’t just lock you out when you choose to interact with something, and there’s not much dead air when you’re exploring.

Conversations continue throughout physical actions, which makes the experience far more flowing and cinematic. This is helped by a wave of new camera techniques, from soaring birds-eye-view shots of the brothers to clever close-ups and wide angles that provide room for the player to reflect and ponder on what unfolds before them.

A series of unfortunate events occur soon after the prologue which results in the accidental death of their racially provocative neighbour, which consequentially leads to their father becoming a victim of police brutality, shot dead in cold blood. 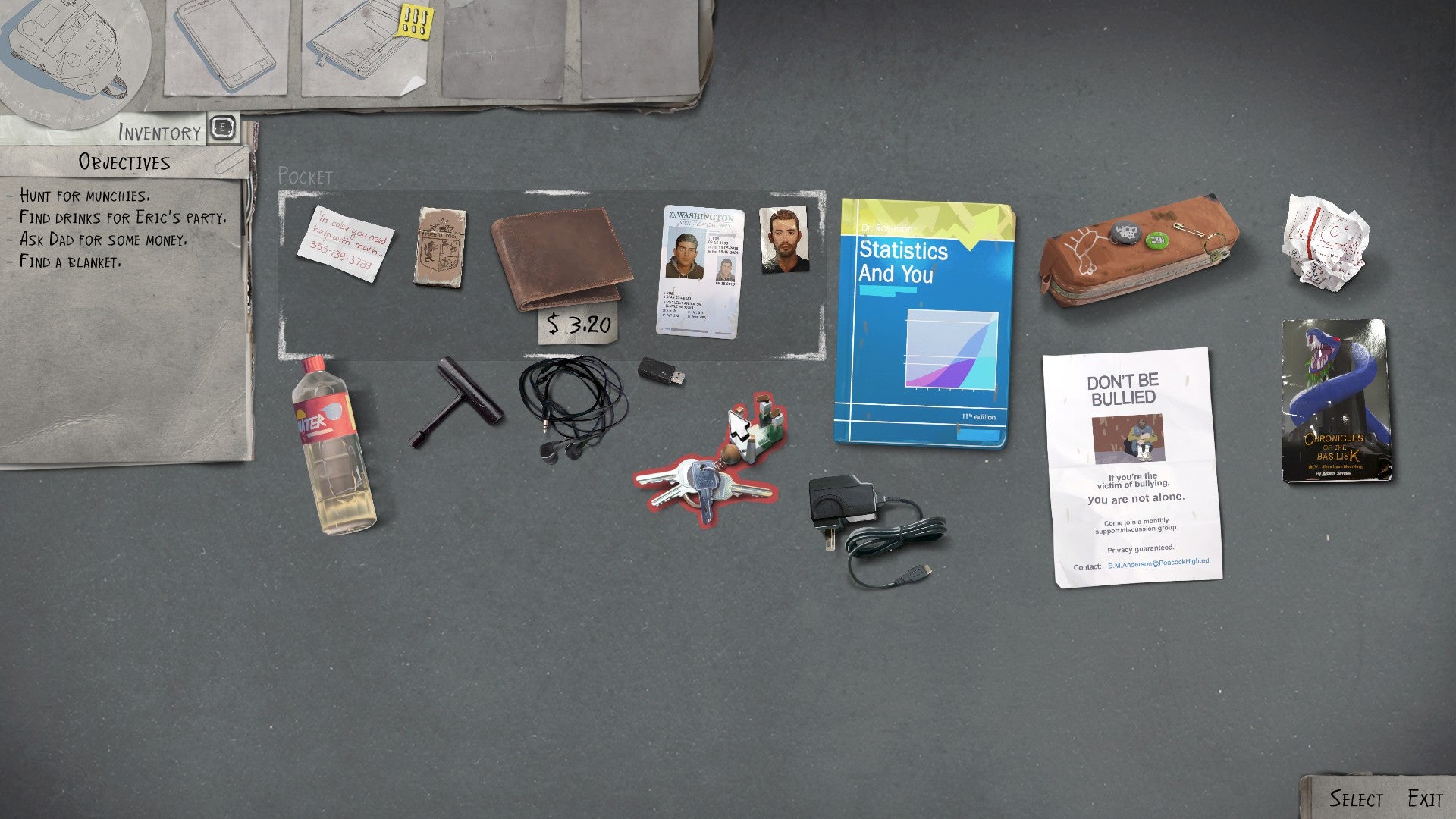 The trauma unleashes some kind of supernatural element within Daniel which causes even more chaos, and you are left to pick up the pieces. Crucially, you pick up your backpack before becoming accidental fugitives and fleeing the scene. If the brother’s journey is the heart of Life is Strange 2, the backpack is the physical representation of that.

The menu and inventory system has been fleshed out in a meaningful way, and your backpack is filled with sentimental items from your home and will continue to bustle with objects as you progress through the story. You can also hang souvenirs and attach patches to it, these acting as the optional collectables you can find during the events of the game.

Most importantly, the items in your backpack actually mean something. It holds everything that the brothers have left from their former life. Sean’s notebook is another key piece of paraphernalia. During quiet moments Sean can use his art skills to sit and draw the environment around him, a fun mini-game that actively creates a memory, showing DONTNOD’s affinity to tie play to the narrative.

Currency also factors into the game this time around, and you can purchase (or steal) items that can help you survive in the American wilderness. Filling up water bottles, finding public toilets and making hard choices about camping gear are all part and parcel of the narrative as you go on the lam.

The writing is absolutely stellar and the best in the history of Life is Strange. It feels like the team has found their feet with Sean and Daniel, even at this early stage. This is evidenced best in the small moments, like when Sean is deflecting the reality of the situation with his imagination to calm his young brother, turning a worrying woodland exploration for food and shelter into a Lord of The Rings LARP session. Its charming and funny, but DONTNOD seem to know exactly when to pile on the emotion, and a cutting self-reflective moment is never too far away. 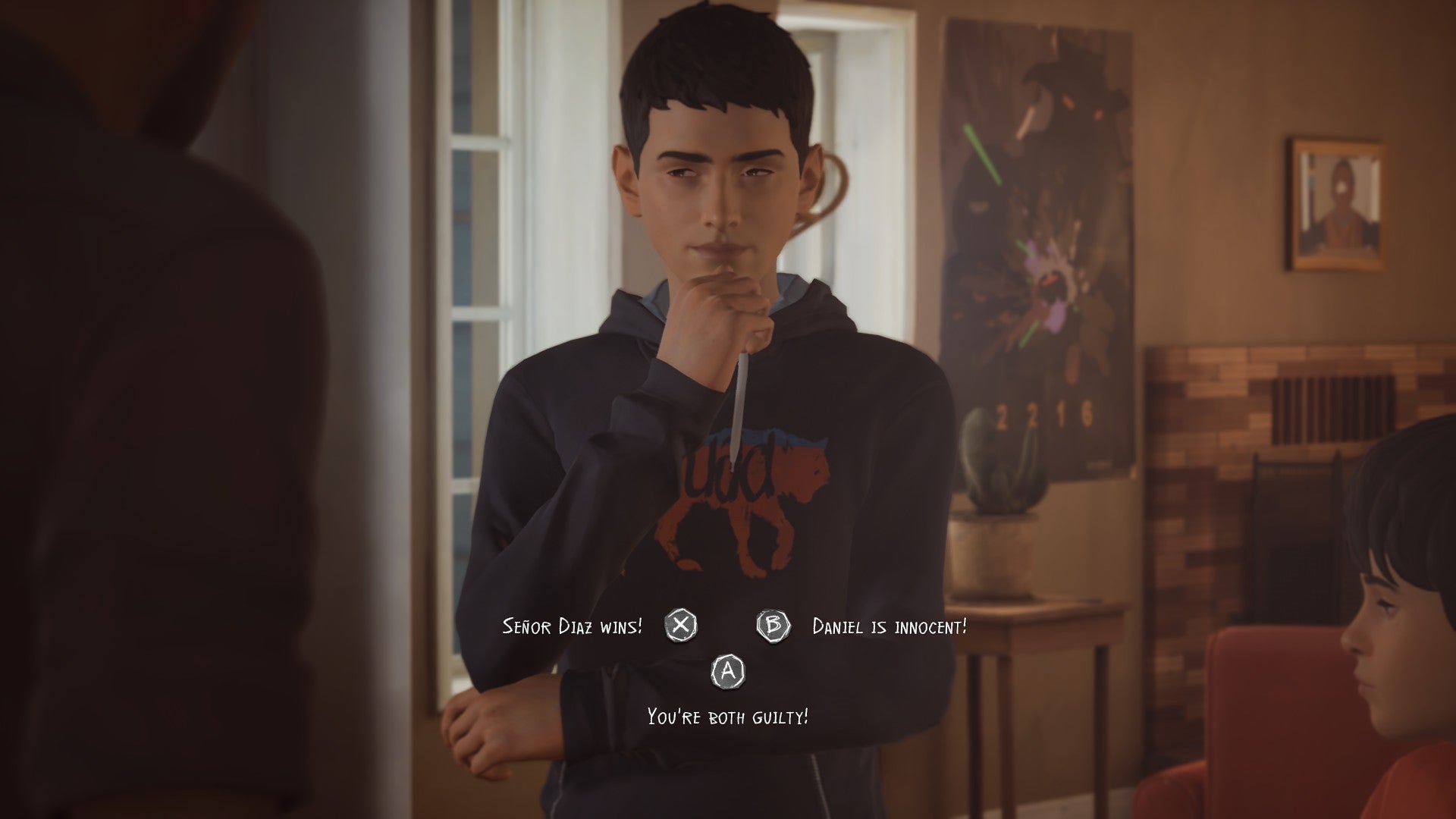 It doesn’t shy away from politics either. Across the episode the Mexican Diaz family are subject to disgusting racial slurs and told “You’re the reason we need to build that wall”, framing the game in the modern political climate. There is a feeling of unease around NPCs in the woodlands when you approach them to ask a favour, and there are allusions to nationwide political divides and protests peppered throughout the five-hour story.

Whilst exploring you will find an extra blue highlight on certain items in the environment that allows for a discussion between the brothers, instead of observations local to the protagonist. You can teach Daniel about trail blaze marks on trees and push him to keep trying when he feels like giving up on skipping stones.

Its made interesting because you realize that Sean is just as green to the world as his brother, but is now his sole guardian. You’re forced to think about how you use that responsibility. Daniel is starving and you don’t have any money for food, but by stealing you impact him by blurring the lines between right and wrong, which have consequences even within this one episode.

As you might imagine, Daniels A.I is extremely clever. He will embrace his childish curiosity to explore and probe the environment, and if you aren’t watching or thinking about him your relationship will suffer. At one point, you hop over a seemingly nonchalant log obstacle. If you choose to just soldier on ahead, Daniel will fall trying to amble over it and hurt himself without your help, losing trust in you.

You will make mistakes like this often, but they force you to learn what parenthood is like, and it creates this unbeatable connection with Daniel, a virtual character that I deeply wanted to protect. Running him a bath, pushing him into a spider’s web, bouncing on a bed to Bloc Party… these are all memories that I look back on fondly already, and I’m excited for how the game is going to later devastate me by twisting these emotional hooks. 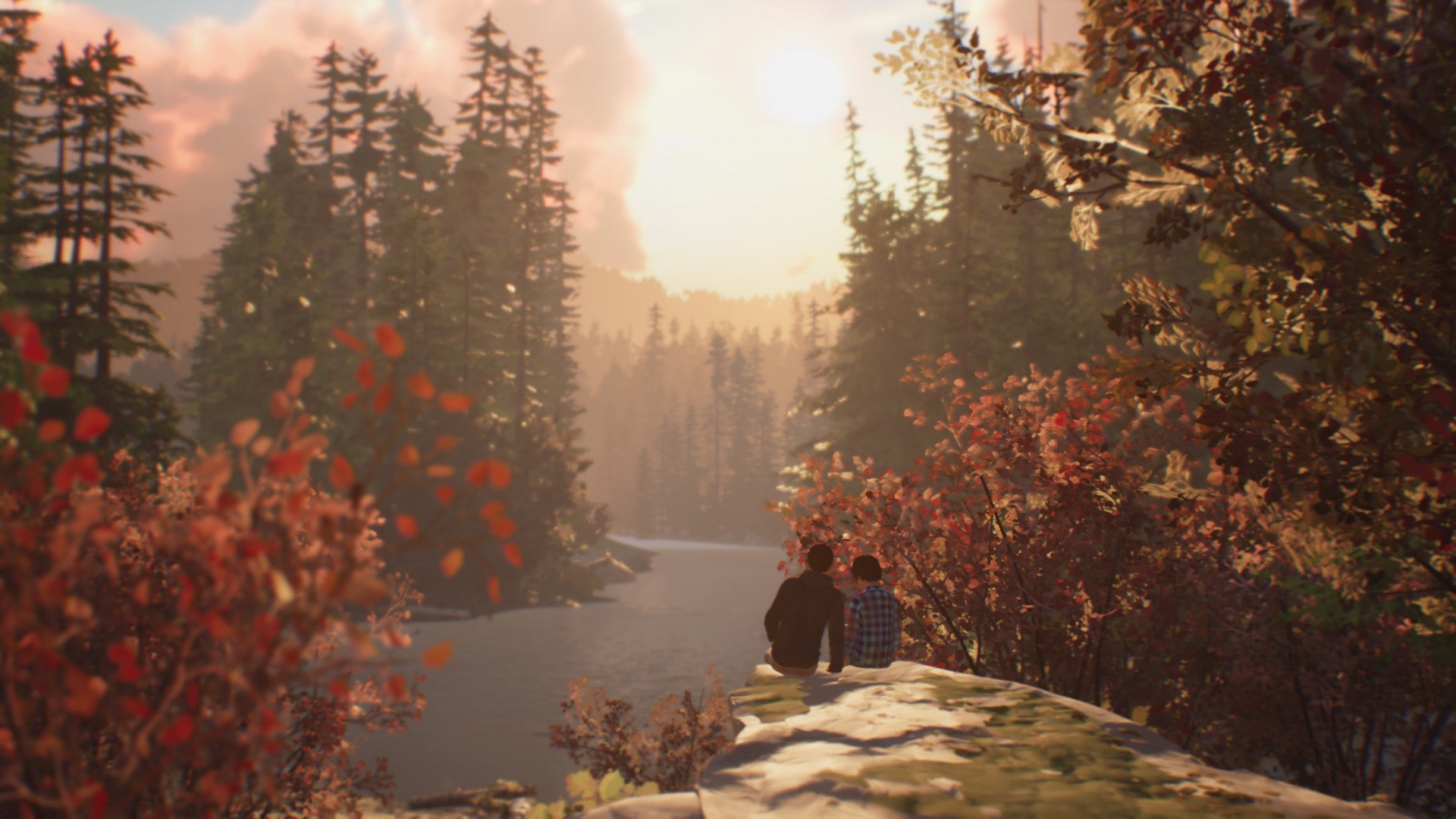 By making Daniel a constant fixture, Life is Strange 2 provides a whole new approach to the ‘companion’ in an adventure game of this nature and it is without conjecture, an absolute triumph. If he goes to a berry bush, you have to make sure you test them before he starts snacking. If Daniel wanders off and starts talking to a potentially dangerous NPC, you have to be there to interrupt and step in so he isn’t exposed to something beyond his years.

Of course, there are also alternate, more binary flashpoints that don’t have easy answers, but I found that making tough decisions and regretting my actions worked to create a sense of permanence and commitment to my personal story that had me even more engaged with this narrative than I ever was in previous titles in the series.

Jonathan Morali’s surreal, melancholic score from the first game returns to fill the empty spaces, providing a wonderful sonic blanket to complement this deeply emotional experience. The licensed soundtrack is great too, from Phoenix’s Lisztomania to songs from The Streets and Bloc Party appearing over the course of the episode. Slightly deep, never trite cuts that you could definitely see the boys listening to.

Ultimately, this results in a beautifully paced introduction to a brand new world, one that I never wanted to leave. Clever writing and meaningful upgrades to the minute to minute gameplay ensure that Life is Strange 2 is a formula-breaking evolution for the adventure game genre.

‘Roads’ is a heart-breaking leg of an emotional journey that never feels limited by its medium. I’ve played seasons of other choice-driven narrative games that had less emotion and heart than this five-hour odyssey. With Life is Strange 2, DONTNOD has upgraded and refined every element that made its forebear successful, whilst sprinkling some magical new additions into the mix to create an essential genre-pushing experience that isn’t just for fans.