If you need a speaker to get a (socially distant) party going, then the XBOOM Go PL7 serves up an impressive sound. It’s fun, produces big bass and its multi-coloured lightning system marks it out as an unabashed party speaker.

The XBOOM PL7 is the latest wireless speaker in the South Korean brand’s range of party-focused wireless speakers. Sitting at the top of the line-up, the LG XBOOM PL7 brings a colourful presence – via its ever-changing multi-colour lightning system – to your music playlists and parties. 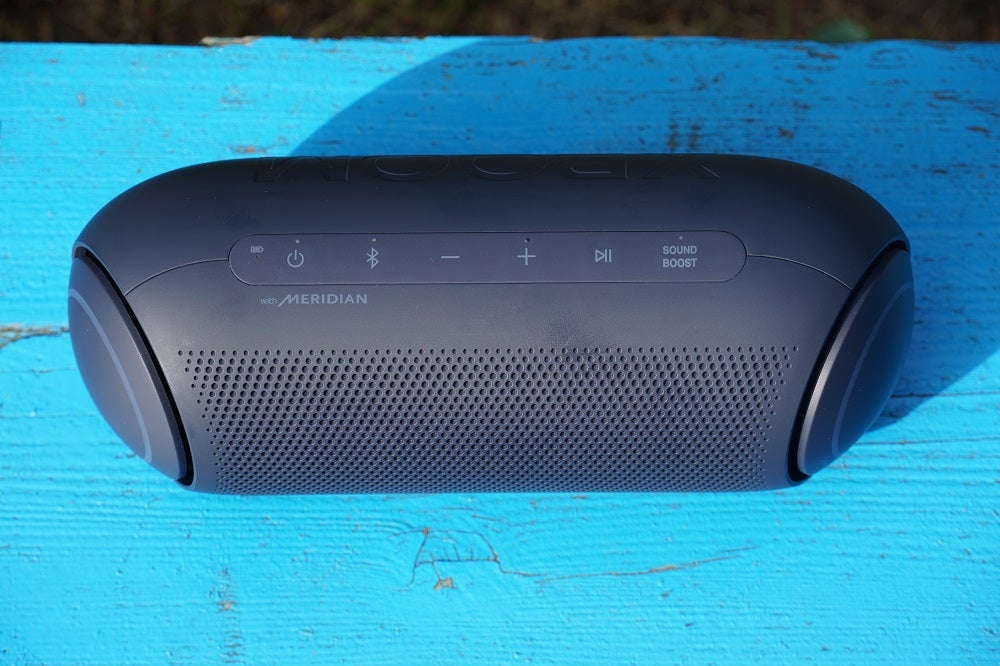 Unlike the PK7 there isn’t an integrated handle, but if a smaller speaker is of interest then LG offers the PL5 and PL2 as alternatives. The PL7 tips the scales at 1.46kg and that’s slightly heavy for a ‘portable’ speaker but is an improvement over the PK7, which weighed twice as much.

It’s a good looking speaker with its curved and sleek lines – the shape sort of reminds me of the ‘pigskin’ ball used in American Football. The finish is rubberised, which makes it easier to get a grip and while it comes in just one finish – a rather metallic-looking blue – the ring-shaped woofer lights at each end enliven its mood. The rubberised finish does make it a magnet for greasy fingerprints though. 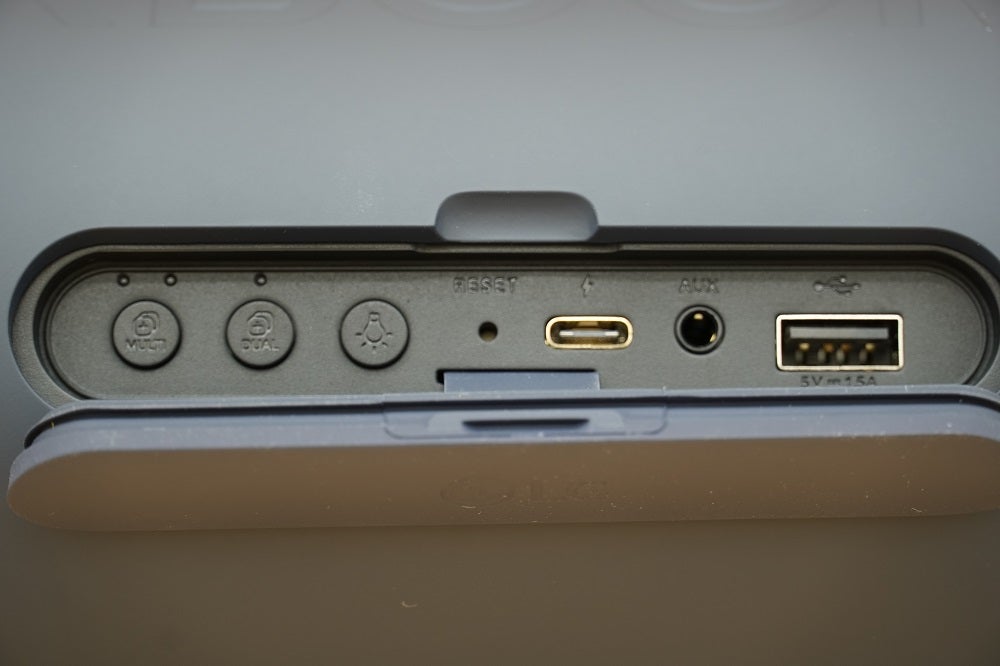 The front of the speaker (if it isn’t obvious) is where the grille is placed, and around the back is the (massive) XBOOM logo with a rear flap beneath that conceals a micro USB-C port for charging, auxiliary out and USB port for charging mobile devices. Also there are three other buttons that we’ll come to in the Feature section. 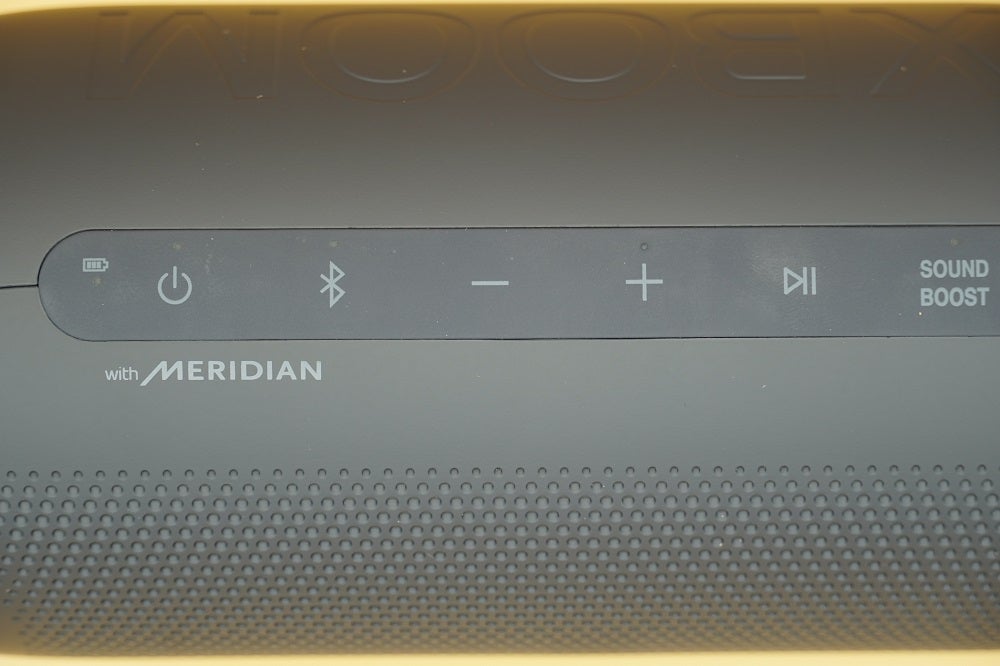 Up top are buttons for Power, Bluetooth pairing, Volume and Playback buttons, alongside a battery level indicator (Green = good, Amber = not as good, Red = needs a charge), and Meridian’s Sound Boost for, well, boosting the sound. The LG XBOOM PL7 can also act as a speaker for phone calls with a microphone embedded in the speaker’s top right-hand side.

LG says the rechargeable 3900mAh battery inside the speaker is good enough for ‘approximately’ 24-hours, but that ‘approximation’ comes with caveats such as playing music at 50% volume and turning off the mood lighting and Meridian Sound Boost, so actual battery life will vary depending on use and features. Charging to full takes five hours.

Speaking of the Sound Boost feature, Meridian’s contribution to the LG XBOOM PL7 sees the sound amplified by the press of a button for a bigger and more powerful performance. The PL7 supports MQA but the only other codecs you get are AAC and SBC. 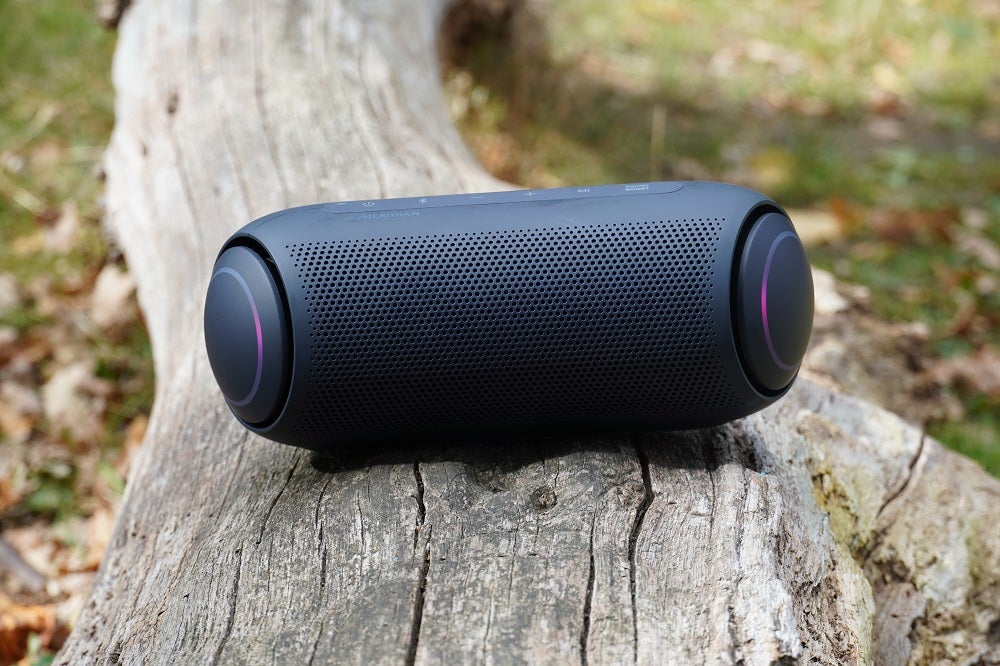 The PL7 is water-resistant (or weatherproof, as LG puts it) to IPX5, which means it can shake off a low pressure spray of water. Basically don’t use it around the edges of a pool – it might actually sink to the bottom if it fell in.

We mentioned before there were three other buttons around the rear of the speaker. One is Dual Mode, which places the speaker into a stereo pair for an even bigger (re. frighteningly loud) performance. Only a PL7 can be matched with another PL7 as you can’t mix and match a PL7 with a PL5, for example. 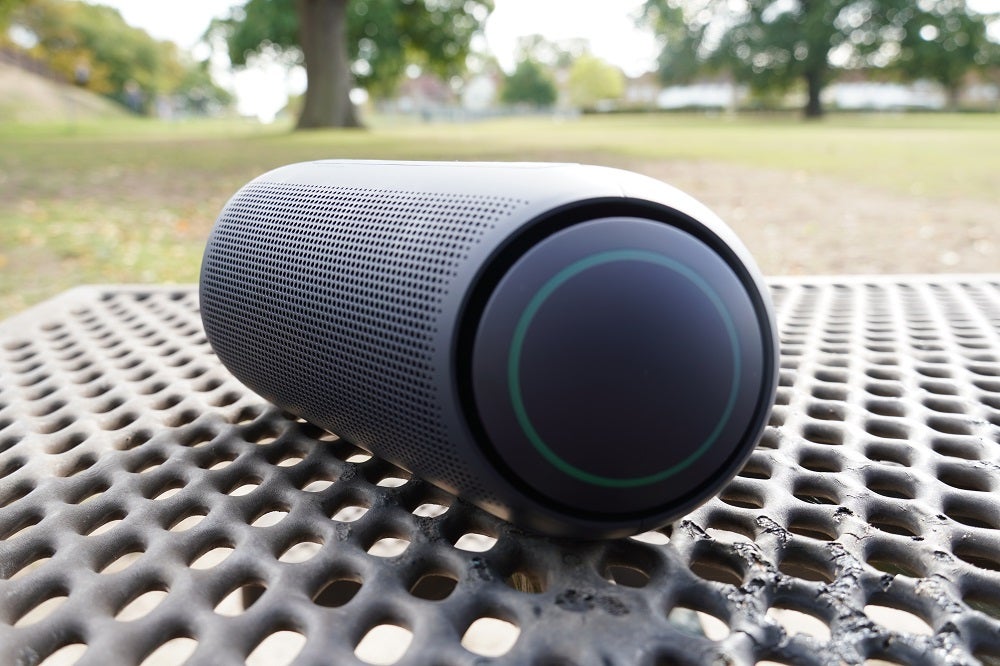 Next up is Multi Mode, one of those ridiculous features that seems like it’s included to beat a Guinness World Record. With this you can link up to 100 LG XBOOM PL7 speakers if you’re not content with annoying you next-door neighbours but those several doors down as well. The third button is much simpler – it changes the speaker’s mood lighting.

The PL7 also works with the Bluetooth Surround Ready feature supported on a number of LG TVs. If you have two speakers then they can be connected to a compatible TV for a surround sound experience.

The XBOOM PL7 supports Google Assistant/Siri through a mobile device, though in a slightly convoluted way activation is done by holding down the ‘Play’ button for two seconds. It works fine, but it’s not the hands-free approach you might be thinking of. 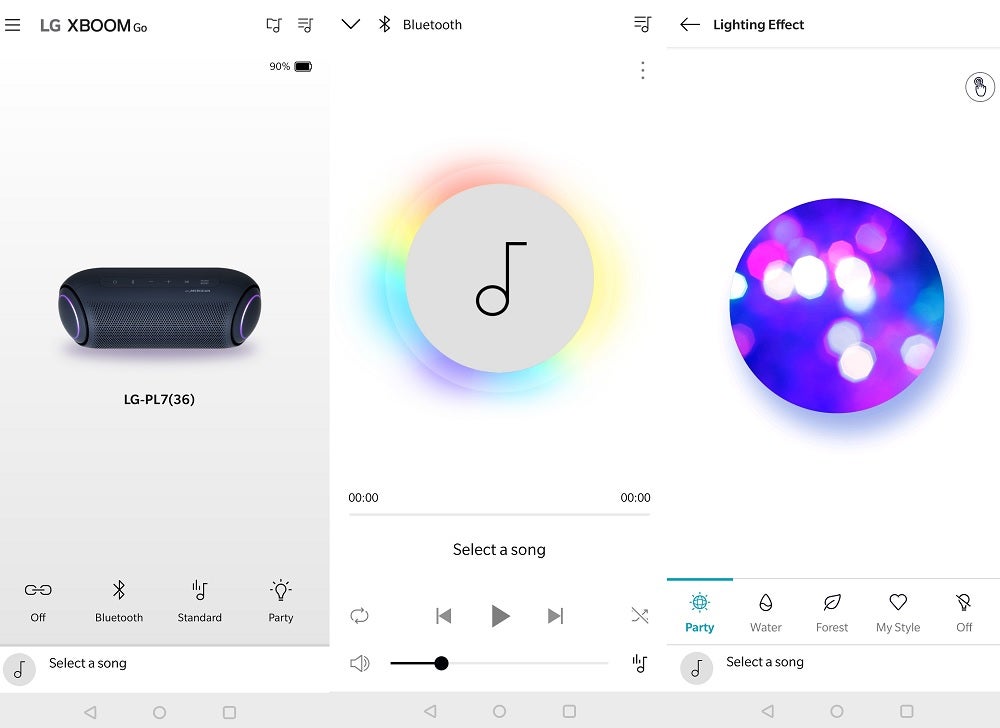 Last but not least is the XBOOM app (Android/iOS). It has most of the features mentioned above plus throws a few more settings such as Gesture control and Auto Play. The Android version has a simple and clean approach with customisation of the light modes also possible.

For a speaker called XBOOM you’re not really thinking of anything other than a big and loud sound – and the LG XBOOM PL7 does do that. But it’s also capable of firing off a controlled and finessed delivery that belies its name. 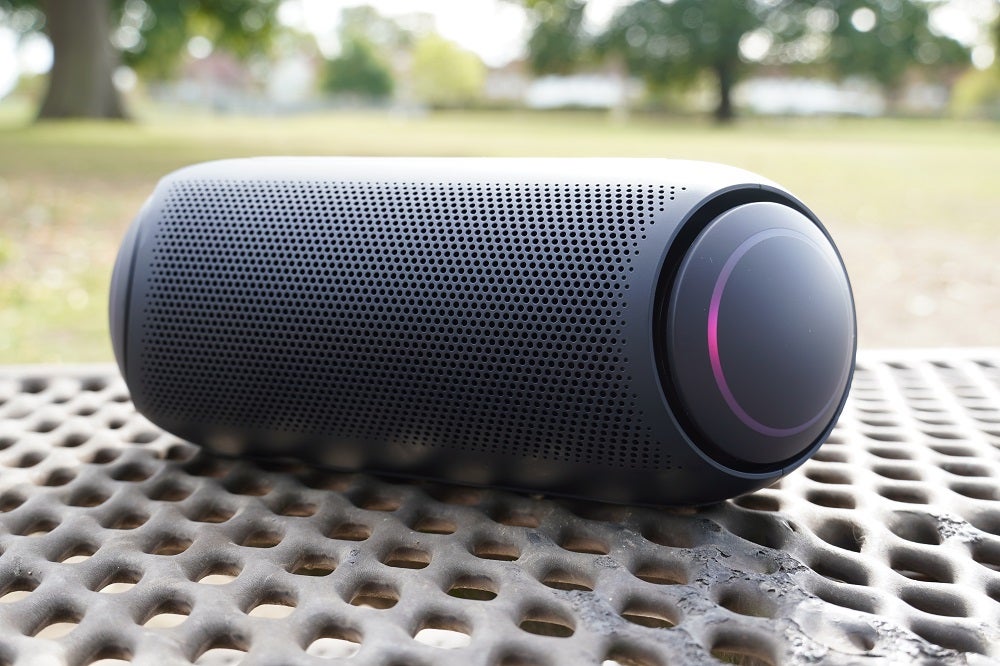 It produces a full and weighty sound with the dual action passive radiators giving it an additional thrum and bellow that’s above other similarly priced speakers. Its low-end power is evident with a play of TNGHT’s Higher Ground, its big bass hits with a thud but is also clean and tight in its delivery. Vocals aren’t given the short shrift with Travis Scott’s auto-tuned voice in The Plan given enough space and fired further forward in the soundstage so it isn’t compromised by the beefy basslines.

It doesn’t create a wide soundstage, although dynamically it metes out the highs and lows decently, with Ludwig Göransson’s The Mandalorian Orchestra soaring in its last half of the track, showing this is a speaker that’s capable of more than just big bass.

Switching on Sound Boost makes the soundfield bigger, funnelling more power and energy through its 2.3-inch woofers. Don’t expect the speaker to suddenly become sound wider with Sound Boost on, but taller and firing its sound out further. 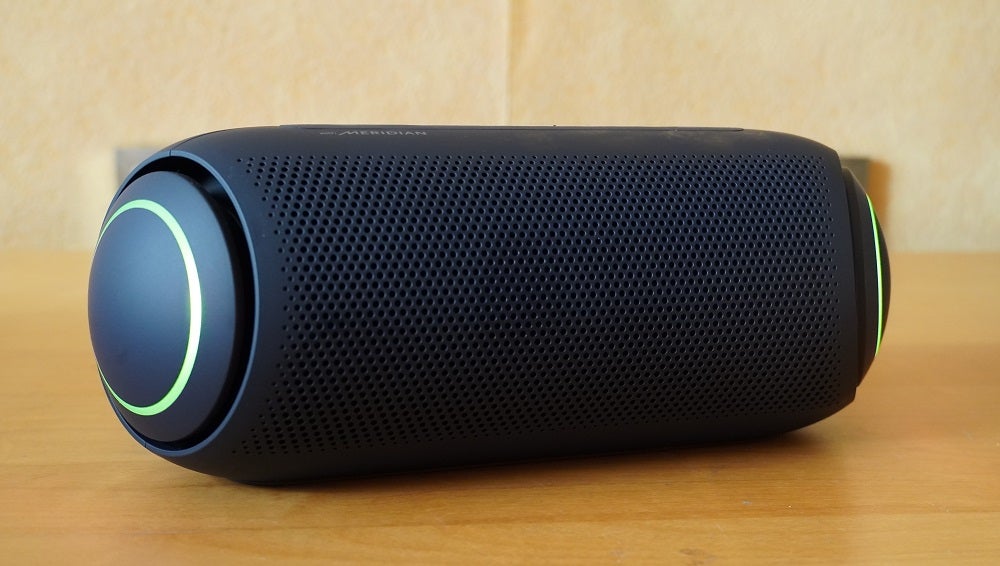 And it does this while producing a balanced and surprisingly neutral sound. Treble frequencies aren’t the most distinct (in fact they’re rather dull), but there are decent levels of separation and good timing and rhythm to its flow that means you’re in tune with a track like Tame Impala’s One More Year from beginning to end.

The light show that accompanies the XBOOM’s performance is one that some may find gimmicky, but its presence here is right for the party mood the speaker creates and in sync with the music. Although if you are going to party with the speaker, you’re going to want to do it with the lights down. In the XBOOM Go PL7, LG has crafted another winning portable speaker.

You should buy the LG XBOOM Go PL7 if…

It keeps up the very good sound quality with plenty of bass, detail and clarity, and the Sound Boost amps it up further without distorting the sound. The loss of aptX-HD from the PK7 is noted, but the sound quality is still impressive.

The XBOOM PL7 comes in a less bulky form factor than the PK7, looks more stylish and less like a toy. And those lights on either may be gimmicky to some, but we like the personality it gives.

You shouldn’t buy the LG XBOOM Go PL7 if…

If you like to look good when you’re out and about – and let’s be honest the PL7 is still on the bulky side – then the Marshall Emberton. Its sound is warmer and bass is not as beefy, but it’s more portable and a treat to use.