Given our fears about the Nano panel technology inside the 65LA970W, it’s a huge relief to find that this 4K TV’s contrast performance is actually extremely impressive – so long as you’re very careful with the TV’s settings.

Particularly spectacular is the way that, with the panel set up right, it delivers black colours that genuinely look black. That horrible grey milkiness associated with previous Nano efforts has disappeared more or less completely, leaving in its wake black colours that are more consistently deep than those of both the Samsung UE65F9000 and the Sony 65X9005A UHD/4K TVs.

In other words, this time out LG’s Nano technology has been delivered without wiping out the key contrast benefit of direct LED lighting. 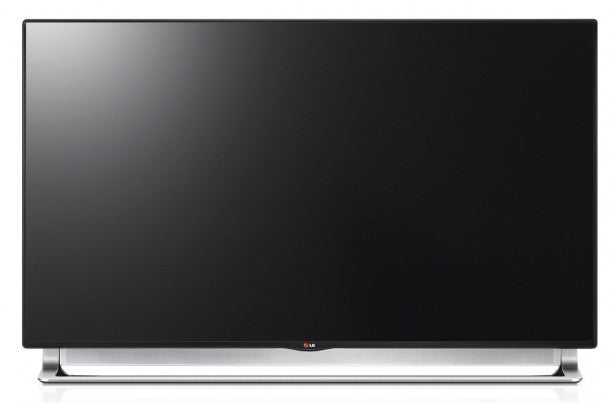 It’s not just the dark parts of the 65LA970W’s pictures that remind us of direct LED’s strengths, though. The whole point of using local dimming in conjunction with direct LED lighting is that you can deliver different levels of light to different parts of the screen, meaning it’s possible to have blazing whites and vibrant colours within the same frame as inky blacks. And the LG 65LA970W delivers on this direct LED benefit with interest, producing images of sensational vibrancy and dynamism made to look all the more impressive by the fact that they’re appearing on a huge 65-inch screen. This is a TV that demands your undivided attention, and it’s impossible to resist its call.

We mentioned that you need to get the panel set up right to optimise its dazzling contrast potential. For us, this entailed setting the dynamic contrast to Low, the LED Local Dimming to Low, and the backlight to around 65 (or even lower if your room is dark). Turning off the dynamic contrast and local dimming features is not an option as without them the LG 65LA970W’s black levels take a really quite painful hit.

Obviously the concern for any picture enthusiast in using dynamic contrast and local dimming features is how many distracting, unwanted side effects they cause. But thankfully the Low dynamic contrast setting does its work while generating remarkably few distracting brightness shifts in the image, and the local dimming delivers its localised illumination without causing anything like the same severity of light ‘haloing’ and blocking around very bright objects witnessed from direct LED LG TVs before.

In fact, during normal viewing you pretty much never see the local dimming halo issue at all; it only becomes visible when you’re looking at, say, a section of white text against a black background. A situation that hardly ever crops up except with onscreen logos or end credits.

The fact that you pretty much have to use the 65LA970W’s dynamic contrast and local dimming features does illustrate that the native contrast performance of the LG 65LA970W isn’t very special. But, while this isn’t ideal, you’ve got to give serious kudos to LG for being clever enough with its light handling options to be able to ensure that the LG 65LA970W delivers the contrast goods.

You may be thinking it a bit odd at this point that we didn’t start off our tests by discussing the 65LA970W’s headline feature, its 4K/Ultra HD resolution. But our concerns about the Nano tech were just so strong we had to check this out first. After all, all the pixels in the world won’t help if something as fundamental as contrast has been screwed up.

Without further ado, though, let’s feed the 65LA970W the sort of UHD source material it was born to handle. 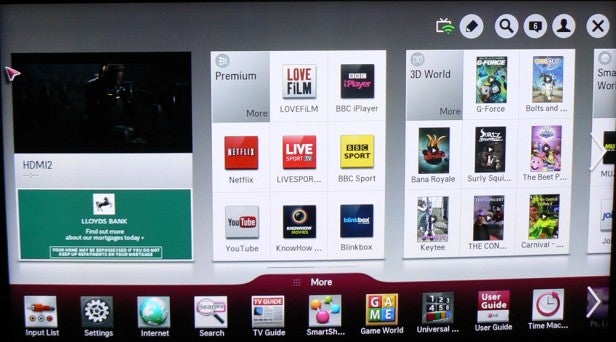 With widely available native UHD content pretty much non-existent for now, we fell back on an actually quite lengthy mix of demo footage stored on an 8GB LG USB stick and one of Sony’s 4K promotional servers. And basically the 65LA970W knocked it out of the park.

With the LG content in particular, which is far and away the best UHD demo content we’ve seen to date, the quality of the native UHD images takes your breath away. We’ve seen a number of other UHD TVs already, yet the staggering resolution, texturing, depth, clarity, noiselessness and sheer exhuberant verve of the 65LA970W’s presentation still struck us as being truly spectacular.

The more UHD footage we watched on LG’s set, moreover, the more clear it became that our sense of awe wasn’t just a first impression caused by switching from a normal HD TV to a UHD one. So consistently spectacular is the LG’s presentation that even after hours of watching nothing but native UHD content we still found ourselves frequently just shaking our heads in disbelief that TV pictures can look this good.

As ever it’s important to explain that it’s not just the extra sense of resolution you see in skin, grass, trees, water, hair, clothing, sand, rocks and all those other bearers of ultra fine details that you feel UHD’s impact. Having so many extra pixels to play with is also hugely impactful, for instance, on the sense of depth you see in the image. Views across Paris and St Petersburg in the LG demo reel, for instance, are resolved much further into the distance than would be the case with a normal HD image, as the extra pixels make it possible for the image to ‘see’ further before succumbing to flatness-inducing softness.

Its UHD/4K pixel count also enables the 65LA970W to resolve colours with more subtlety than a normal HD TV could. This results in flawless shading devoid of all striping and patching, as well as an extra sense of solidity to images that joins with the extra depth resolution in causing many onlookers to comment that there’s an almost 3D feeling to native UHD images.

On top of all this, the sheer density of pixels in a UHD picture hides all sense of the pictures being produced from a pixellated device. Images just look real.

Add the laser like precision of the 65LA970W’s UHD pictures to the stunning dynamism created by its direct LED lighting engine, and we’d go so far as to say that the 65LA970W’s UHD images are arguably the best we’ve seen to date. No mean feat given the quality we’ve already witnessed elsewhere.

With native UHD sources still many months away, though, if you buy a 65LA970W now you’ll predominantly be watching upscaled HD on it. So let’s have a look at how LG’s upscaling engine shapes up.

For the most part it fares well. It’s great to see, for instance, that images lose none of their colour naturalism or vibrancy in the upscaling process. Upscaled images also enjoy a much denser look than normal HD images, reducing the sense that you’re watching an image being produced on a TV screen.

There is a slightly enhanced sense of detail too, though this isn’t quite as pronounced as it is on either Sony’s X9005A TVs or, especially, Samsung’s F9000 TVs.

Instead of feeling as if you’re seeing lots more actual picture detail, with the 65LA970W it feels more like the whole picture has simply being sharpened – something that can result in pictures sometimes looking slightly gritty or noisy, and some edges looking a touch jagged.

In other words, Samsung and Sony’s upscaling engines both feel a touch cleverer than LG’s, in that they seem able to apply their sharpening techniques on a more intelligent, localised basis, while also being more astute at dealing with source noise before applying their upscaling algorithms.

There’s a sense, too, that the LG’s upscaling isn’t quite as good at using colour cues when calculating the look of the extra pixels it’s introducing as the upscaling engines of its key rivals. 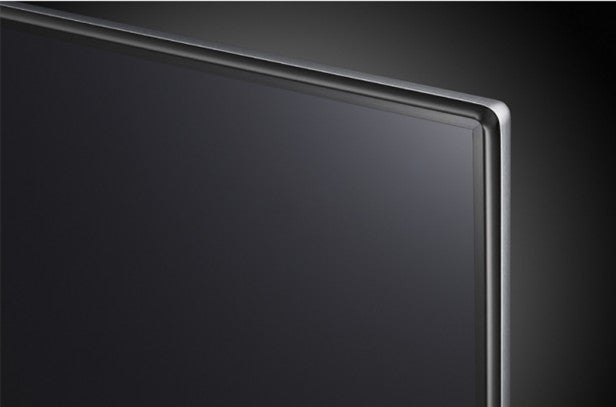 Reducing the LG 65LA970W’s sharpness setting can tone down the slightly fizzy feel to UHD pictures, so we’d recommend that you do this. Though obviously the universal nature of this adjustment means you lose a bit of UHD crispness in the process.

Having finally found something negative to say about the 65LA970W’s pictures, we might as well get into the set’s other problems too. Easily the most significant one is that the TV’s effective viewing angle – despite the fact that it uses an IPS panel type – is extremely limited in both the vertical and horizontal domains.

The image’s contrast and backlight uniformity crashes spectacularly if you’re watching from more than around 30 degrees horizontally or about 20 degrees vertically. What’s more, off-axis viewing also reveals much more aggressive light haloing around bright objects. These problems are sufficiently severe that you really do need to consider how the 65LA970W will sit in relation to your main living room seating positions before buying one.

The set’s motion processing can sometimes exaggerate the gritty finish to upscaled footage too, by giving it a life of its own, and there’s some very slight backlight clouding in the image’s corners when handling very dark content. You can almost remove this, though, by keeping the backlight level sufficiently low.

You also see a touch less shadow detail in very dark areas of the picture than we’d ideally like. For instance, the background walls of the room in the final Harry Potter film where gold goblets and plates multiply if you touch them look a little hollow and empty – though at the same time they do also enjoy an emphatically black colour that still leaves the picture looking cinematic.

The last niggle concerns standard definition playback (if you really have to use it from time to time). For while LG’s upscaling is generally adequate with such sources (once you’ve toned down a tendency to over-saturate colours), you can see a little horizontal line structure around or over areas of fine detail, like stripes on suit, eye details and onscreen text.

Used as the main TV for the review period
Tested for more than a week
Tested using industry calibrated tools, discs and with real world use
Tested with broadcast content (HD/SD), video streams and demo discs
Previous
LG 65LA970W Review Next
3D, Audio, and Conclusions Review