Over some parts of the screen, the 55UB950V’s 3D performance is serious ‘wow’ material, featuring gorgeously rendered full HD detailing, beautifully rich and natural colours, brightness levels no active system can match, and an immaculately natural sense of depth marred by no sign of the double ghosting crosstalk noise problem you get to some extent with most active 3D screens.

Using the passive 3D system means there’s no flicker either, making extended 3D viewing less tiring and making it much more comfortable to watch 3D in a bright room than is the case with active technology.

All this greatly enhances your connection with and immersion in the 3D action. And the slight dimming effect of the 3D glasses reduces the impact of the backlight blocking issue so troublesome with 2D viewing.

However… bizarrely for some reason on our test sample the bottom right quarter of the screen and a section in the bottom centre of the screen (that badly affects subtitles, sadly) suffered with pretty severe crosstalk ghosting even from a normal viewing angle.

Our initial suspicion was that this was a fault specific to our sample, maybe caused by a flaw in the structure of the passive filter. But on discussing the issue with another reviewer who also had one of LG’s new TVs, they were seeing the same problem. So we have no choice but to mark the set heavily down for its 3D performance unless LG provides us with evidence that this isn’t an issue that affects the entire 3D range — if it does, then we will update the mark and this section of the review, and highlight the change in the comments section.

It’s important to add here, too, that while passive 3D technology usually dodges crosstalk from a normal viewing angle, if you find yourself watching from a vertical viewing angle of more than around 13-15 degrees above or below the screen, then the passive filter suddenly causes crosstalk to become a big issue.

What’s more, the bass delivered by that separate woofer is well integrated into the soundstage, leaving no gaping crossover ‘holes’. The bass sounds smooth and clean too, with no phutting even under severe pressure. It doesn’t reach the deepest bass depths we’ve heard from a TV, but we’d rather a system accept its limitations and work within them than try to stretch beyond its capabilities and end up sounding distorted.

Of course, we do have to conclude this section by saying that the 55UB950V’s audio isn’t even in the same league as the stunning performance delivered by the huge speakers built into Sony’s latest X9005B 4K TVs.

We realise that we haven’t said much about webOS in this review despite it being arguably the 55UB950V’s star attraction. So let’s just add here that as well as being super fast, one of its key tricks is that it basically equalises all your content sources, no longer making a distinction in priority terms between TV sources, AV sources and streamed sources. And this is a decision which fits perfectly with modern TV usage.

The other key facet of the 55UB950V’s performance to cover here is input lag, i.e. the time it takes the TV to render images. This has tended to be a weakness of LG’s IPS screens, and sadly it’s a weakness that continues with the 55UB950V. Our input lag tests produced figures that occasionally dipped to 66ms, but for the most part hit 100ms.

These figures are twice and three times as high respectively as the sort of figures we’d really like to see, and that’s with the game mode enabled and every every bit of picture processing we could find switched off. So as far as we can tell there’s no way of preventing the 55UB950V from having a negative impact on your gaming. 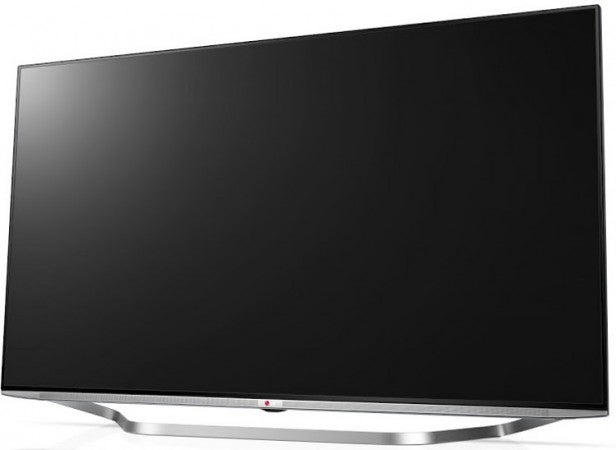 There are times, especially with native 4K content, when the LG 55UB950V’s pictures look spectacular. Its webOS system revolutionises smart TV functionality to such a degree that it’s a reason in itself to consider buying the 55UB950V. And one further attraction we haven’t touched on yet is its £2,300 price, which is a massive £400 cheaper than the typical asking prices for both the Sony 55X9005B and Samsung UE55HU8500.

However, its contrast problems make the LG 55UB950V overall an inferior picture performer to those models, while its input lag makes it a no-go zone for gamers. What’s particularly disappointing about this is that we’ve been reporting both these issues with LG TVs for years now, yet they still haven’t been addressed.

The LG 55UB950V is an aggressively priced UHD TV illuminated by a ground-breaking smart TV system. But while its pictures can look great with the right sort of bright colourful content, overall its contrast and input lag flaws make it hard to recommend, especially given the quality of some of the UHD/4K competition this year.