The Samsung UE65HU8500 is where 2014 gets interesting. Not only is this 65-inch model the first TV from Samsung’s 2014 TV range, it’s also the brand’s flagship 2014 TV. Which means two key next-generation things: it carries a native 4K / UHD resolution, and it’s curved. The question is, is it also brilliant? Or has the introduction of the curve sent Samsung round the bend? 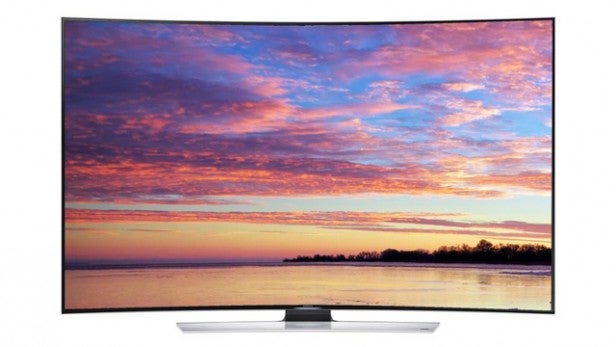 Any discussion of the Samsung UE65HU8500’s design has to kick off with its curve. As with the only other curved TV we’ve seen to date, the LG 55EA980W, the screen curves gently back at its centre, creating an instant and potent aesthetic impact through its sheer difference from the flat TVs we’re all used to.

We suspect that many people will feel highly attracted to the UE65HU8500’s subtle curve as a design feature, but it remains to be seen if it’s going to have any appeal from a performance point of view.

One potential negative thing about the curve, of course, is that if you want to wall hang it it’s going to stick out much more than most flat TVs – though Samsung has at least come up with a simple wall mount that makes hanging the UE65HU8500 easier than you might imagine.

Another distinctive point about the UE65HU8500’s design is the narrowness of its bezel, which is barely 1cm across. This stands in stark contrast, of course, to the huge, speaker-sporting bezels around Sony’s upcoming 2014 UHD TVs – and it’s a contrast we think may work in Samsung’s favour with the public given what a chunk of living room space a 65-inch screen takes up even with minimal bezel around it.

We did feel, though, that the bezel looks a little plasticky and uninspired versus the panache and style of some previous high-end Samsung TVs.

As with last year’s UHD Samsung TVs, the UE65HU8500’s connections are predominantly provided by an external connections box, which hooks up to the TV by just one cable. As well as making it easier to keep the space around the TV looking tidy, this external connections box carries many of the TV’s ‘brains’, so that 65HU8500 owners could if they wish pay for upgrade boxes in the years ahead so that their TV is always enjoys the latest Samsung features and operating systems. Like a more extensive version of the Evolution Kits available for the last couple of generations of Samsung’s non-UHD TVs.

Connection Box
Another benefit of this upgradable connections suite is that it means you don’t have to worry about changing connection standards – eg, new HDMI formats – or new UHD broadcasting formats should these suddenly appear.

As a perfect example of what we’re talking about, the connections box with the UE65HU8500 carries four HDMI 2.0 inputs supporting 50/60Hz UHD playback – as well as compatibility with the MHL 3.0 spec (which supports 4k formats up to 2160p30) and support for both the HEVC UHD delivery system being used by Netflix and the HDCP 2.2 anti-piracy standard. None of these connection options were available on last year’s Samsung UHD TVs, but owners of those TVs will soon be able to buy the new connections box and thus instantly enjoy the upgraded connectivity.

With so much confusion surrounding the UHD HDMI situation last year we always felt that the upgradable connections box was a massive attraction, and even though the HDMI situation is more established now, it’s still early enough in UHD’s life for us to still find Samsung’s unique upgradability hugely reassuring.

The UE65HU8500’s more advanced connectivity is far from the only advance its new connections box carries versus last year’s though. It also houses a considerably more powerful ‘brain’: a Quad Core Plus 1.8GHz system that apparently runs twice as fast as last year’s 1.3GHz engine. This is used to drive a more powerful video processing engine – including local dimming of the edge LED lighting array that’s delivered over more separately controlled zones than Samsung has attempted on a ‘mainstream’ TV before.

The extra power is also put to use with improving the upscaling of HD and standard definition content to the screen’s UHD pixel count, and, intriguingly, it powers a new PureColour technology that simplifies the colour processing system while also providing more than seven times as many colour adjustment points as any previous Samsung TV. Resulting, hopefully, in a much more defined and rich colour palette.

Smart TV
The UE65HU8500’s new brains also, of course, include Samsung’s latest smart TV system. At first glance this seems surprisingly similar to last year’s system, flying in the face of the wholesale annual changes we’ve become accustomed to from the Korean brand. But dig a little deeper and there are actually plenty of significant new developments to explore. 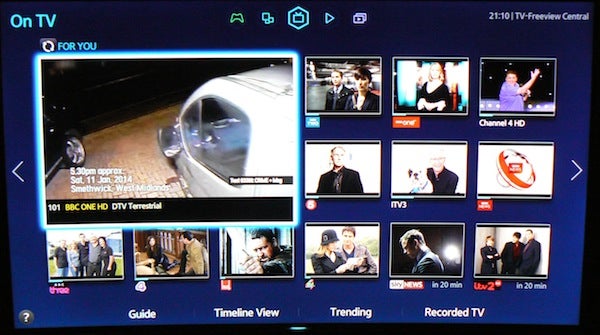 We’ll cover the system in detail in a dedicated feature in the next week or so, but briefly the main changes look like this.

Last year’s Social Hub has been replaced by a Game one. Social features are now included with the smart content menu window devoted to your personal streamed content rather than having their own screen, and include a trending on Twitter content-finding option. Gesture controls have been replaced by finger controls, the idea being that you can adjust the screen with really small movements of your fingers now, rather than needing to move your whole hands in the fatiguing way you had to with last year’s Samsung sets.

Also a big step in the right direction is the introduction of a new single content-sharing and control app for smart devices that replaces the over-complicated two apps of last year. Then there’s the ‘multi-screen’ function, which on the Samsung UE65HU8500 lets you display up to four different full HD ‘subscreens’ of content simultaneously. So you could, say, have live TV showing to top left, YouTube clips to top right, a list of related video clips to navigate to at bottom right, and the ‘On TV’ hub menu to bottom left. The system works smoothly and quickly, and is a handy visual trick for Samsung to have in its shop-floor arsenal. 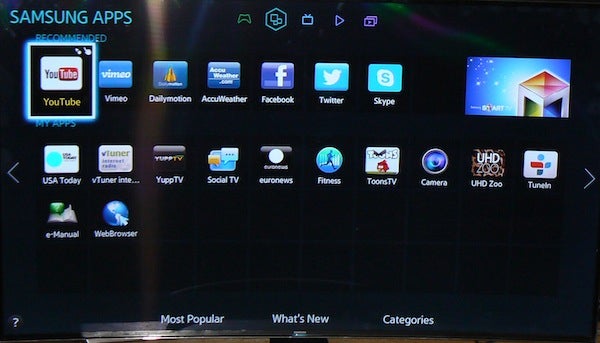 Another key new element to the UE65HU8500 is a football mode introduced in recognition of the fact that this is a World Cup year. This switches to a footie-friendly picture preset, lets you highlight footage of a particular player from the tournament, and rather niftily gives you the option to have your TV automatically record a game’s highlights to USB, with the TV deciding what’s a ‘highlight’ by analysing crowd noise.

What about the curve?
We can’t, of course, leave off a discussion of the UE65HU8500’s features without looking in more depth at the curved screen. There are so many issues surrounding this controversial development in TV tech, in fact, that we’ll be doing a dedicated feature on the subject soon. Ahead of that, though, here are a few initial thoughts from living with the UE65HU8500.

The first thing to say is that the curve makes more sense on the UE65HU8500’s 65-inch screen than it did on the smaller 55-inch screen of the LG 55EA980W. We’ve always felt that curved screens are more likely to have positive effects at larger screen sizes, and this is borne out by the way the extra sense of depth and immersion the curve gives with both 2D and 3D footage feels more convincing from a wider range of viewing distances than it does with the 55-inch model.

Another benefit of the larger screen is that the area within which you can sit before the curve starts to seriously upset the image’s geometry is expanded, making it easier to accommodate more viewers in the enlarged ‘sweet spot’. 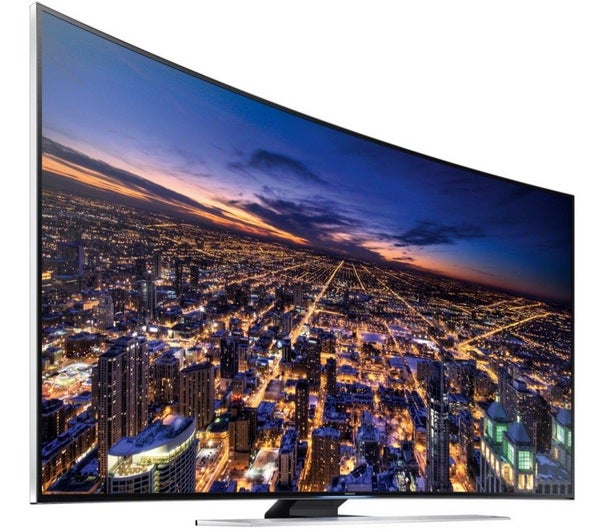 The biggest issue we have with the curve is that if you have any bright light sources opposite the screen, the curvature can cause either double or stretched reflections on the screen – something which might require a little thought with how you place the TV in your living space.

Overall, though, while the curve might not suit everyone, it does have some benefits, and the size of the 65HU8500’s screen makes those benefits easier for multiple users to enjoy thanks to the larger viewing sweet spot. So watching a curved TV needn’t be a solitary activity after all!

To be honest, it’s kind of handy that the curve doesn’t strike us as an unmitigated disaster, since Samsung is so behind its curved technology that it’s only fitted its curved screens with its top-line panel and processing technology. If you’d rather go flat you’ll have to do without local dimming, as well as having pictures created via a less accurate micro dimming system – by which we mean that the image will be broken down into fewer ‘blocks’ for processing purposes than the picture of the 8000/8500 curved models, resulting in less accurate colour and contrast delivery.

Used as the main TV for the review period
Tested for more than a week
Tested using industry calibrated tools, discs and with real world use
Tested with broadcast content (HD/SD), video streams and demo discs
Next
Set Up & Picture Quality Review