The Lenovo Yoga series has been a staple of the Trusted Reviews’ recommended laptop list for quite some time. Offering a versatile, convertible form factor that’s crammed with top-end specs each year, they appeal to a variety of users. In fact, the designs have been so good that many competitors have been inspired by them, such as Dell with its stellar XPS 15 2-in-1.

As such, it isn’t terribly surprising to discover that Lenovo hasn’t tweaked its laptops designs much in the past few years, releasing incremental updates such as last year’s Yoga 920. This year, this trend looks set to continue, with the company’s latest-gen Yoga C930 once again tweaking, rather than reimagining the company’s laptop offering.

Nevertheless, the changes that Lenovo has made, which include a nifty new hinge with a built-in Dolby Atmos speaker, look positive and indicate the series will maintain its place in our recommended product list. 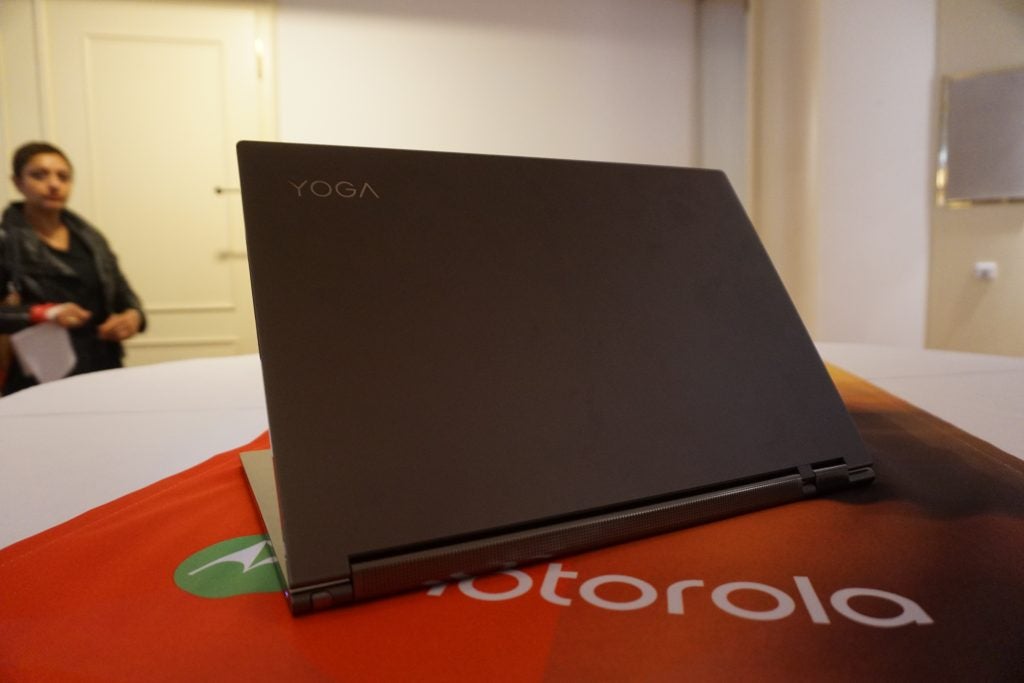 At first glance the C930 looks fairly similar to past Yogas, featuring a similar top-end metal chassis with a dockable Wacom stylus. Up close, however, you’ll see plenty of welcome changes. These include minor modifications, such as a new ‘privacy shutter’ that lets you physically block the front webcam, alongside bigger design tweaks, such as the removal of the watchband hinge.

The watchband 360 hinge has been a staple, but marmite, part of Lenovo designs for years. Featuring an atypical metal design, the band was significantly more ostentatious than competing hinge systems – it’s always been a little too bling for my liking.

Which is the reason I’m a super-big fan of the Yoga C930’s new hinge, which ditches the metal ball bearings for a subtle clamp setup featuring a built-in speaker. The speaker is being marketed by Lenovo as a key selling point for the C930, being designed with Audio experts from Dolby.

The speaker is clever in that it moves to always face its user, regardless of the position in which the laptop is set – be it in tablet or regular laptop mode.

The system is backed up by downward-firing speakers and, according to Dolby engineers at my demo, is the most advanced Atmos system they’ve seen on a laptop. 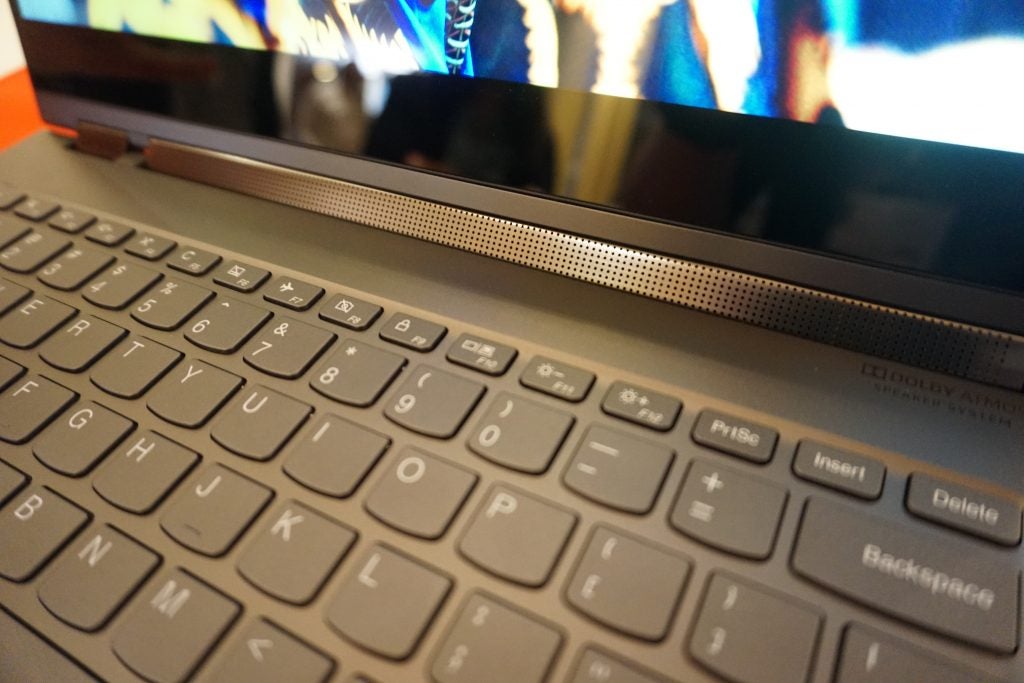 Normally, I take laptop speaker claims with a pinch of salt – even gaming behemoths with giant speakers don’t deliver the best listening experience. But the C930’s system impressed during the demo.

Gauging audio quality in a busy press room without any form of soundproofing or control is close to impossible. But I can personally attest to the system’s volume. Even with the cacophony of a tiny room filled with more than 70 journalists, the speakers were audible and blasted out the demo tracks distortion-free – to the point that some folk next to me asked for them to be turned down.

Sadly, the demo tracks on offer didn’t show off the surround sound features of Atmos, but if the tech works as well as it has on past Atmos laptops, it could be a key selling point for gamers and movie fans looking for a mobile entertainment laptop.

The screen has also had a welcome spruce up that goes beyond the usual ‘smaller bezel’ yearly update. The 4K version I saw has been designed to meet the Dolby Vision HDR laptop standards. Dolby claims this means the screen is “40 times brighter” and has “10 times darker blacks” than laptops without Dolby Vision. Without a colorimeter to hand, I can’t accurately comment on screen quality, but to the naked eye, impressions were positive.

Colours looked vibrant, without being overcooked, and whites were clean. The bright showroom floor lights made judging black levels difficult, but they appeared nicely deep during the demo. The only downside is that there wasn’t any HDR content on show to view, which will be a key test.

I’ll also be interested to see how the Dolby tech compares to the Dell Cinema HDR standard seen on the Yoga C930’s arch rival, the Dell XPS 15 2-in-1. The XPS 15 2-in-1 I reviewed offered a markedly higher 450 nits max brightness than the 4K Yoga C930’s quoted 400 nits level. 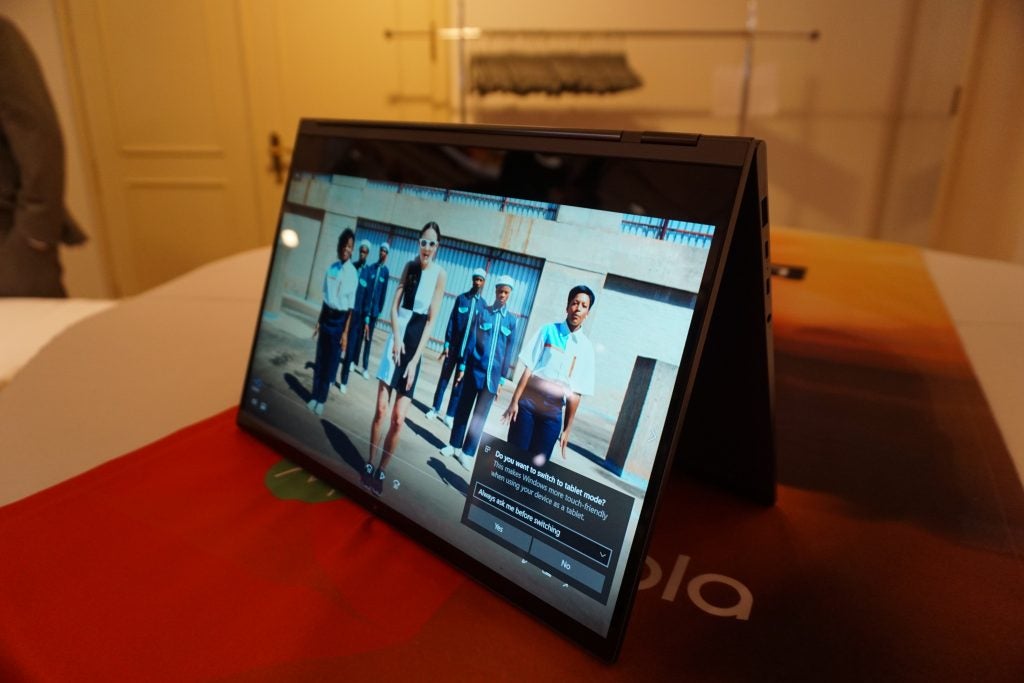 The Yoga C930 will launch in the UK at sometime in September.

The base model will retail for €1499. UK pricing has yet to be confirmed. 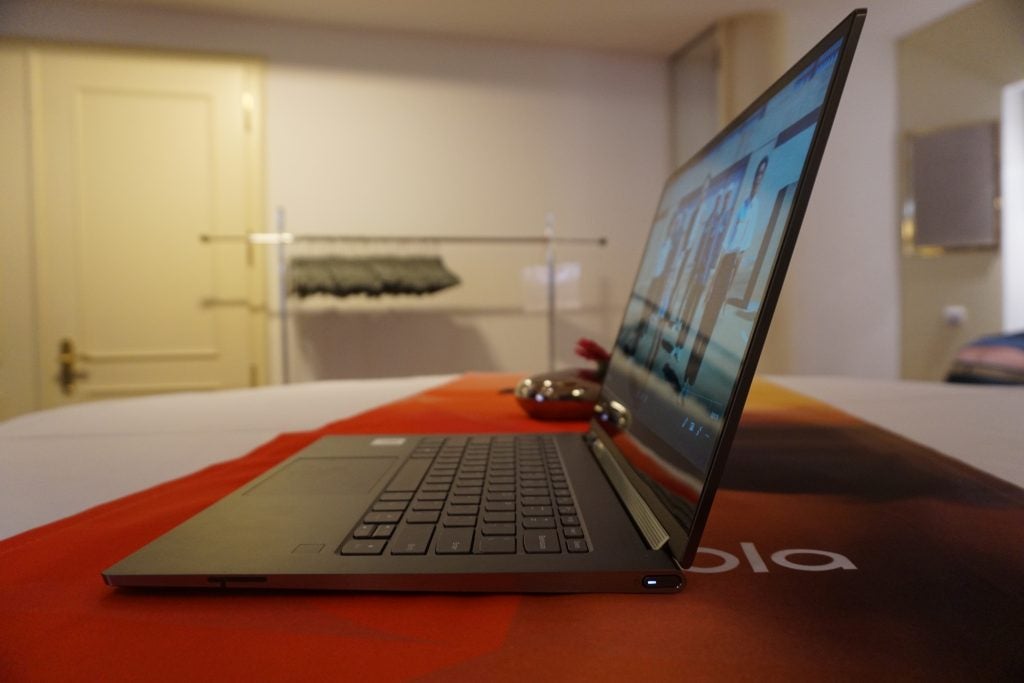 The Yoga C930 doesn’t appear to be a significant update on the, admittedly still excellent, Yoga 920, but the changes that Lenovo has made are positive nonetheless. The minor hardware refresh puts it on a par with competing laptops such as the Dell XPS 15 2-in-1, and I’ll be super-keen to see how its Dolby upgrades perform with proper testing.

If the two deliver even a fraction of Lenovo and Dolby’s claims then the Yoga C930 could be a great option for power users that like to regularly stream movies on their laptop.