The Lenovo Yoga C740 is a great all-rounder for anyone looking for a powerful laptop to work, browse and stream movies on. The 2-in-1 aspect makes this laptop incredibly versatile and a great mid-range laptop for students to sketch and make notes with.

The Lenovo Yoga C740 is a 2-in-1 laptop featuring a Full HD touchscreen and a latest generation Intel processor.

The C-Series combines slim design, innovative features and entertainment to create a series of compelling packages and the C740 is no exception.

At such a low price, this is one of the most affordable convertible Windows 10 laptops we’ve reviewed in recent years, but do its specs and design hold up to make it a worthwhile option for students and bargain hunters? 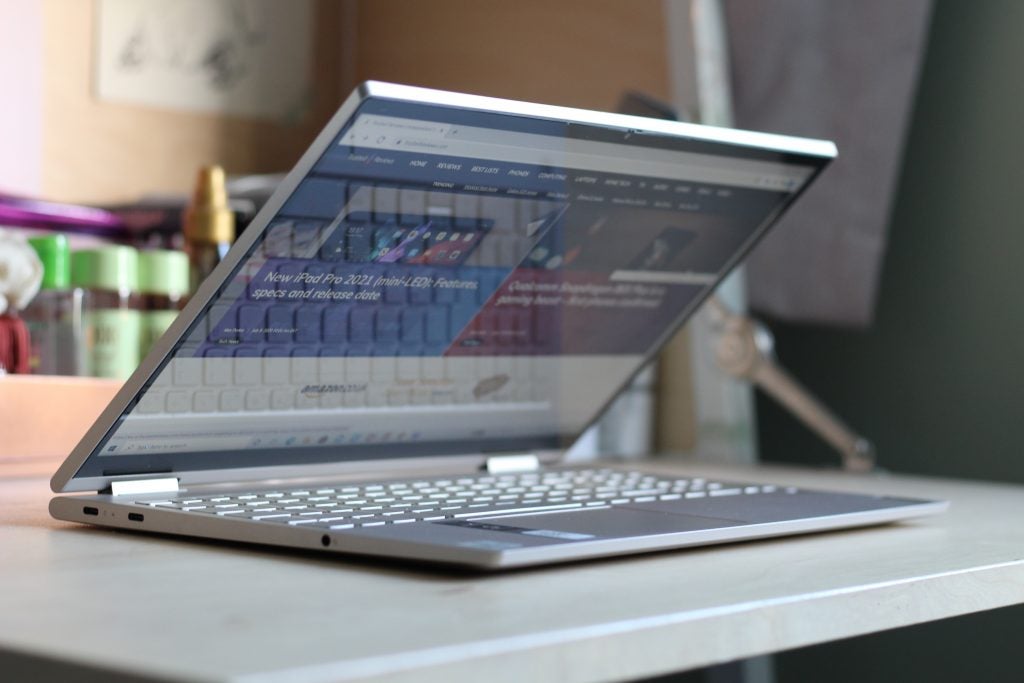 The Yoga C740 is a simple but aesthetically pleasing laptop. The device has a monochromatic design with a muted metallic finish and matching coloured keys.

I received the Mica model for review, which is a light silver shade, but the laptop is also available in a darker Iron Grey variant. Close the lid and you’ll see the ‘Yoga’ logo wink back at you in a mirrored material from the upper left corner. 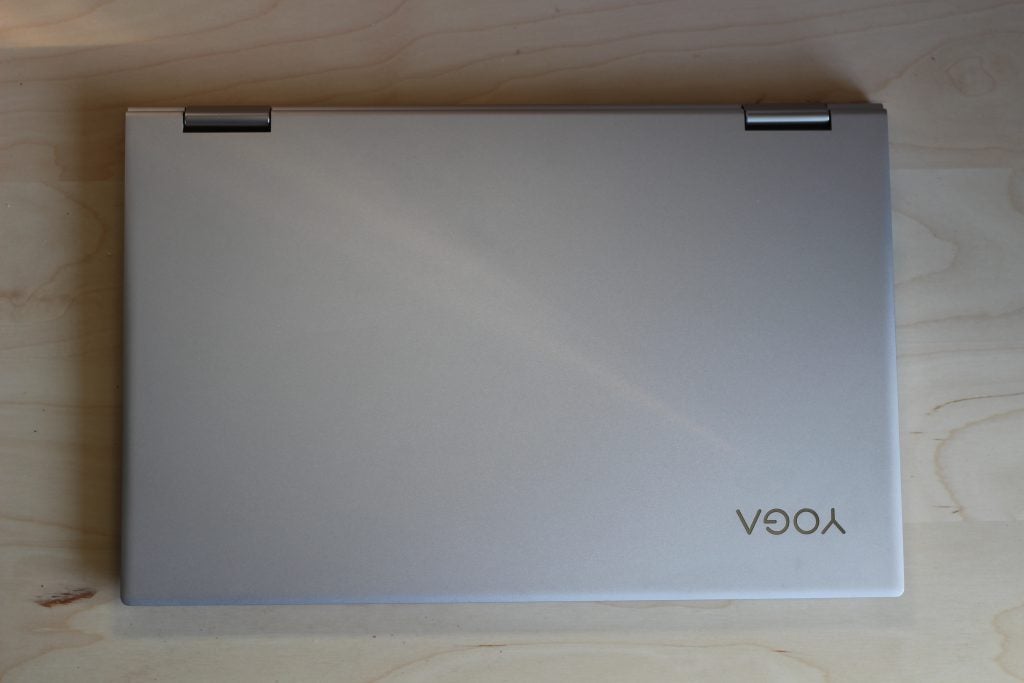 The 360-degree hinge is a fantastic addition, allowing this laptop to be turned into a makeshift tablet for watching videos. At 1.88kg, it’s too heavy to be considered an on-the-go tablet replacement to the likes of the 471g 11-inch 2020 iPad Pro, but this won’t be an issue if you’re sat at a desk most of the time or happy to prop it up in your lap. The C740 doesn’t come with a stylus at default or even have a physical holder built in, but it is at least compatible with any pen that supports the Wacom AES 2.0 protocol.

As a traditional laptop, the C740 is slim and light enough to easily slide into a bag on your daily commute, whether that be to lectures or the office. It is admittedly heavier than other available laptops, but that’s understandable since it has a large 15.6-inch panel.

The laptop features a small number of ports, including two USB-C 3.1 ports (supporting power delivery and DisplayPort), two USB-A 3.1 ports and one headphone jack/mic port. The lack of Thunderbolt 3 support means data transfer isn’t as speedy as rivals, but the omission is forgivable given the price. While the port selection isn’t as limited as a 2019 MacBook, for example, you might need to invest in a USB port or adaptor if you’re looking to use HDMI or Ethernet.

The laptop also features a fingerprint reader below the keyboard for fast and secure sign ins, and Lenovo’s TrueBlock privacy shutter lets you block out the camera so you don’t need to worry about anyone catching you in your pyjamas during Zoom meetings. 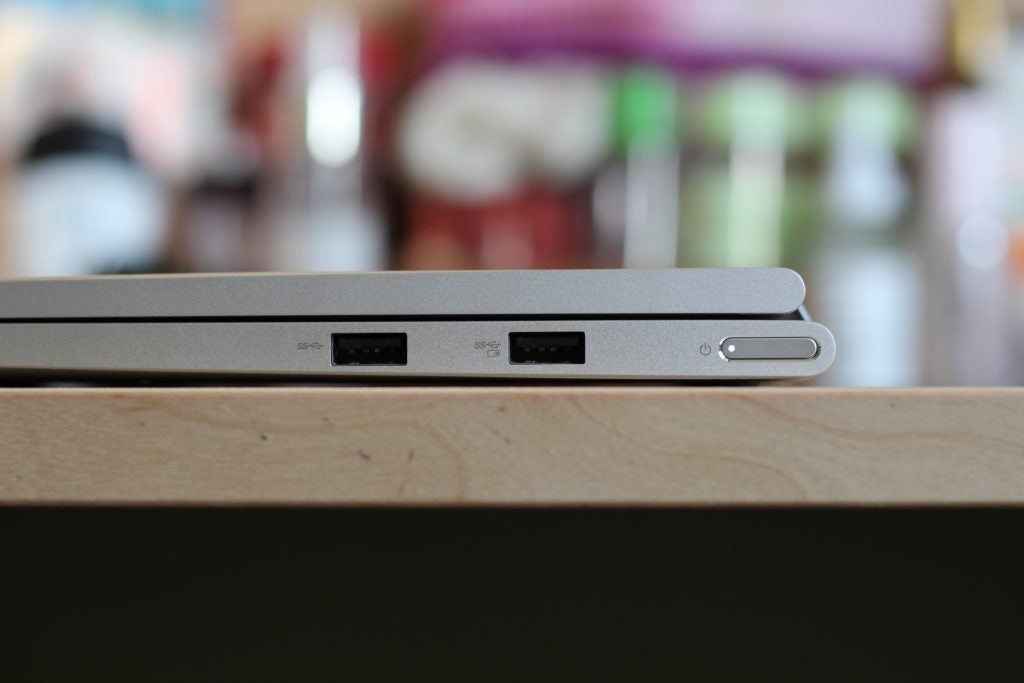 The Lenovo Yoga C740 has a very spacious keyboard, reducing the odds of sending an embarrassing typo.

The keys are a decent size and nicely spread out, spanning almost the entire of the laptop lengthwise. The keys are clicky (but not irritatingly so) and the travel is deep enough to offer a satisfying press despite how shallow this keyboard may appear. 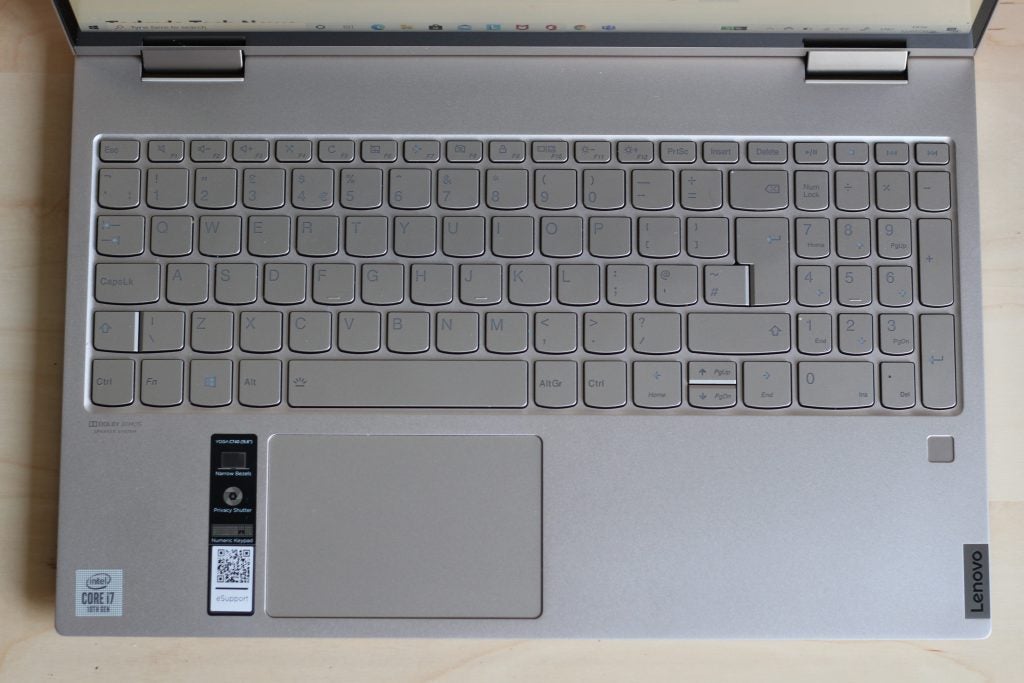 My main gripe here was the Num Lock key, which I somehow managed to hit every time I reached for the squashed-down backspace, but I’m sure that’s something I could train myself out of were I to continue to use the Yoga C740 full time.

The trackpad is smooth and responsive, but still has a good amount of grip to it. Pressing down on the lower two thirds of the pad produces a reassuring click with just enough travel.

The Yoga C740 has a good, if slightly unremarkable, display. However, the touchscreen offers a second way to use this 2-in-1 that note-takers and binge watchers will enjoy.

The model I tested features a 15.6-inch Full HD IPS display, though the laptop is also available in a smaller 14-inch variety at the same resolution. 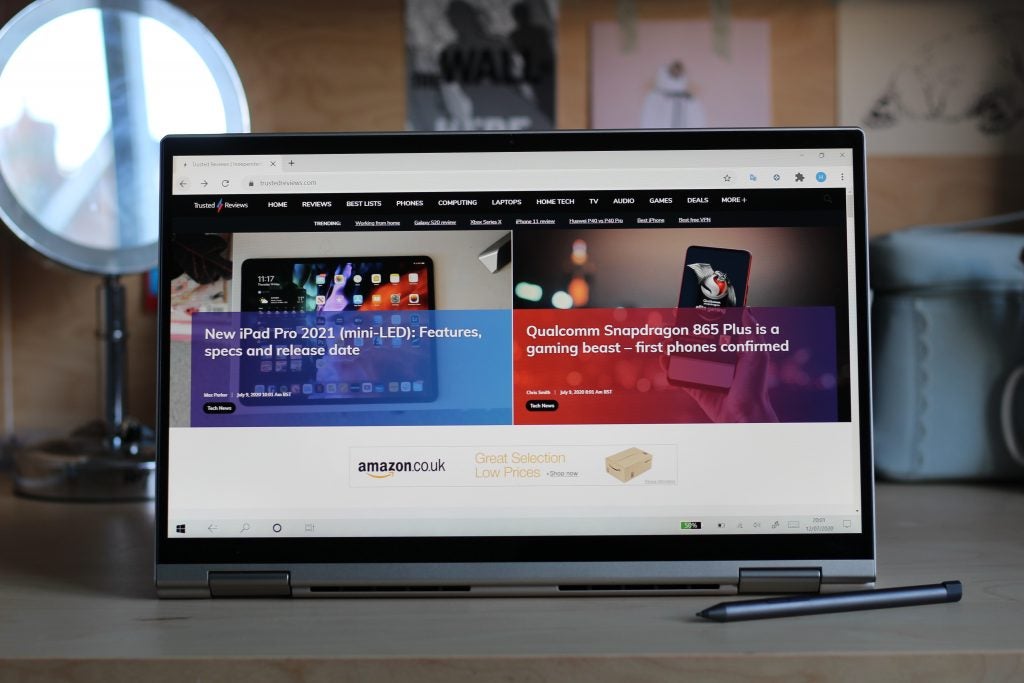 I put the screen to the test streaming Netflix and, while the colours are bright, they definitely lack the punch to stand out. While I didn’t run into any issues browsing or watching content on the display, every so often I did catch myself hammering F12 in an attempt to crank up the brightness to no avail. This is an unfortunately dull display.

The glossy display isn’t ideal for working outside either (believe me, I tried), although I had no problems with reflectivity indoors. However, this laptop comes in anti-glare and glossy variants, so I would recommend opting for the anti-glare version if a shiny screen is a deal breaker for you. 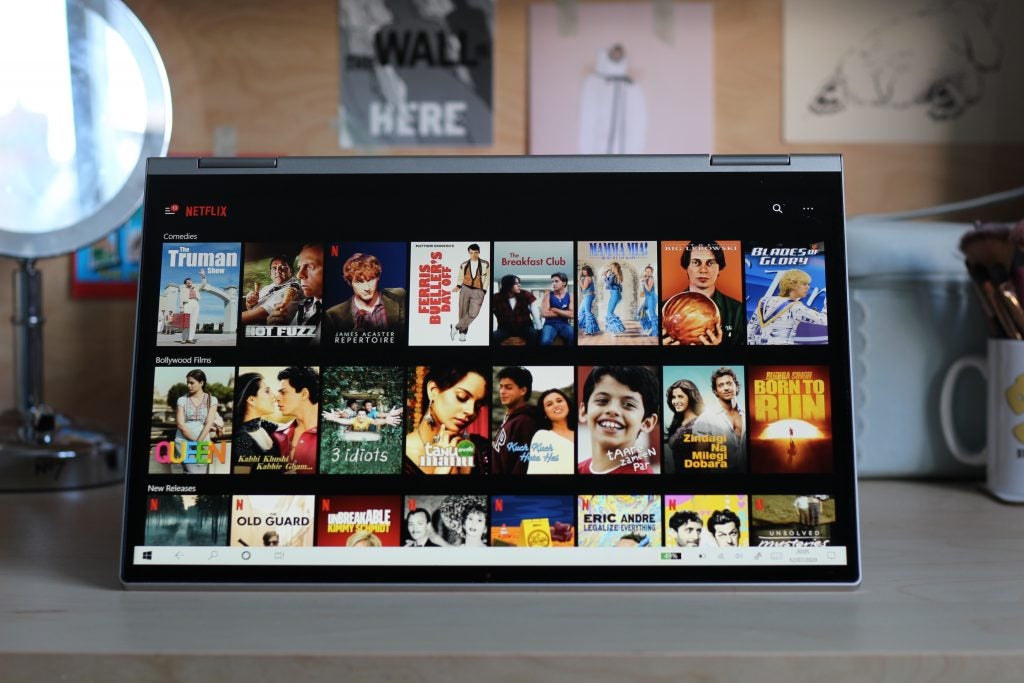 The touchscreen is fantastically responsive. I enjoyed being able to switch between typing and scrolling with my finger when I wanted to quickly get to the top or the bottom of a webpage.

The laptop is compatible with a range of styluses and can be folded flat into a tablet for sketching ideas and taking quick notes. The touch feature is also great for streaming. I preferred to watch movies with the keyboard tucked away and hitting play, pause and adjusting the slider with your finger couldn’t be easier.

The Yoga C740 is powered by Intel’s 10th Gen Core i7 processor, though Lenovo also sells an i5 version. The 10th Gen processor is the latest Intel chip yet, offering faster CPU performance, graphics performance, wireless speeds and port compatibility than previous generations.

The Yoga C740’s performance offers top value for money, rivalling the benchmark scores of pricier convertible laptops such as the £1349 Galaxy Book Flex and the £1199 HP Spectre x360 13. You shouldn’t experience any difference between the three when running basic tasks such as web browsing and video streaming, despite Lenovo’s cheaper price.

The C740 does fall behind a bit in terms of multi-core performance, meaning if you often have a heavy workload or work with intensive apps from the likes of Adobe’s Creative Suite, you’re probably better off with a slightly more expensive laptop. 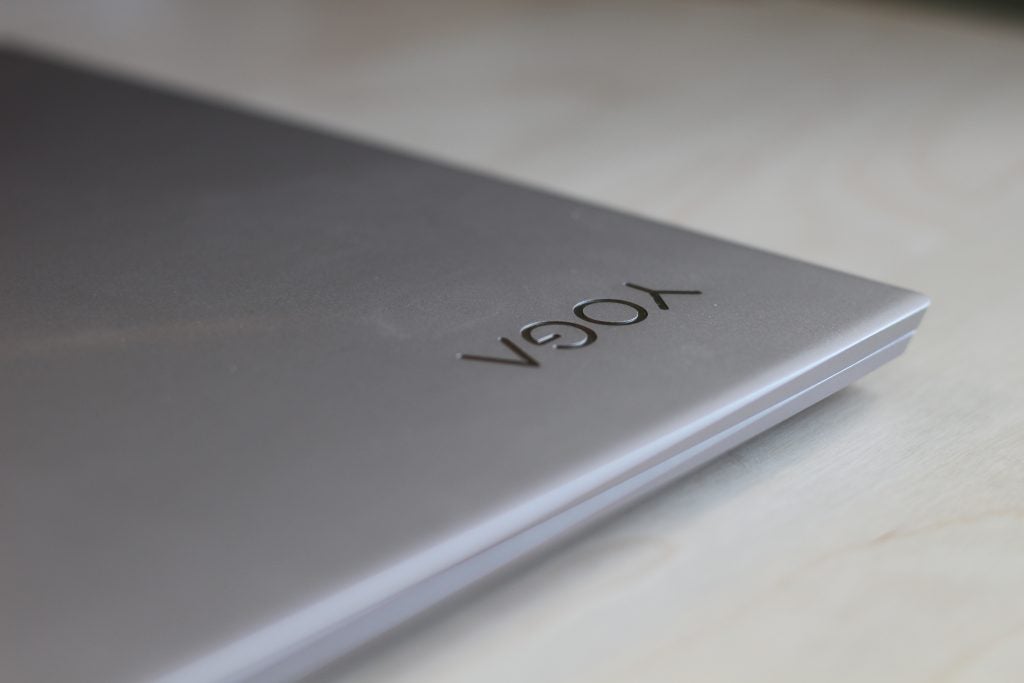 This laptop does not come equipped with a GPU or powerful integrated GPU, so gamers and professional creatives may want to look elsewhere too. Sketching won’t be an issue, but you’re likely to run into issues when it comes to video editing and animation.

The entry-model Yoga C740 comes with a tiny 256GB SSD, which is pretty stingy. Fortunately, you can upgrade the storage capacity all the way up to 1TB, which is plenty of space to save your photos and documents. We recommend most people opt for the 512GB option, which hits the sweet spot for storage capacity and is still very much affordable £899.99.

The Yoga C740 comes with a 65W charger to power its 3 cell 60Wh internal battery. According to Lenovo, one full charge offers around 15 hours of battery or 11.5 hours with HDR.

Our benchmark test (turning brightness down to 50% and running a PCMark 10 simulation) showed a lengthy 11 hours and 34 minutes of use, confirming Lenovo’s claims and proving that this laptop is capable of handling almost half a day of web browsing and video streaming.

The laptop also has a Rapid Charge feature that promises you’ll be able to glean 80% battery from one hour charging when the laptop is on standby or switched off. 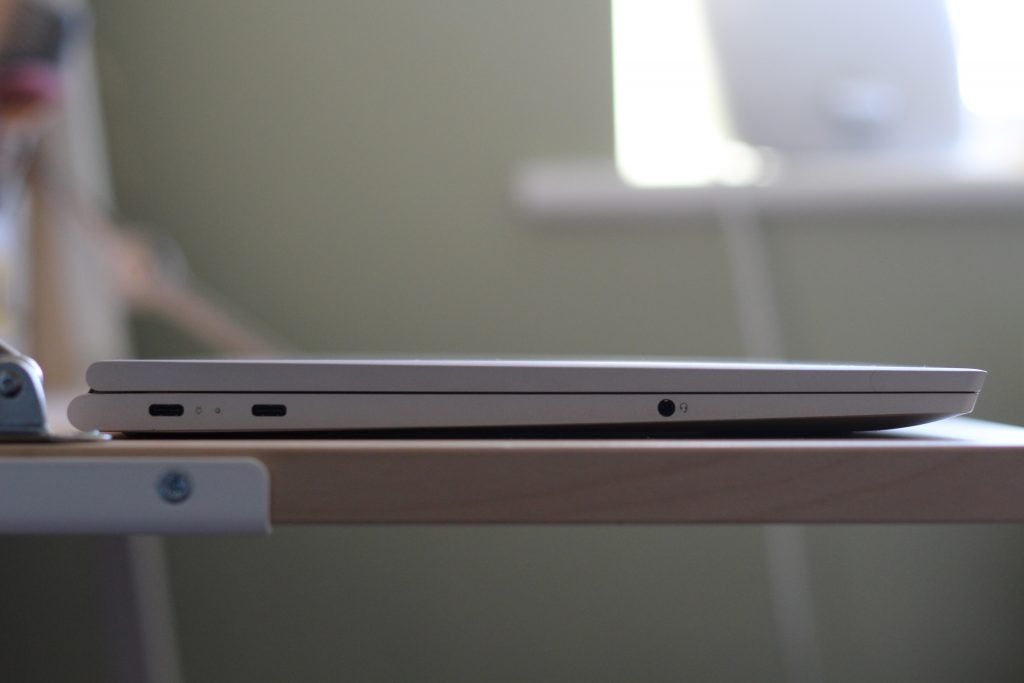 The Lenovo Yoga C740 is a powerful 2-in-1 with impressive specs for its price. The biggest downside is a slightly lacklustre display, but what the screen lacks in punch, it makes up for in versatility.

I can see a student getting a lot of use out of this laptop, as the touchscreen makes it easy to jot down notes and the convertible design makes this laptop perfect for watching TV. Plus, the up-to-date processor ensures the performance and battery are more than capable of handling day-to-day tasks.

It’s not quite as glamorous as 2-in-1 laptops such as the Galaxy Book Flex, but since the Lenovo Yoga C740 is a few hundred quid cheaper, it remains a fantastic option for students and those looking for a bargain.