The Galaxy Book Flex is one of the best 2-in-1 laptops available. The 360-degree hinge, bundled S-Pen and gorgeous QLED screen all combine to make an excellent device for entry-level creatives and students. But since it costs a few hundred quid more than standard ultrabooks, you should only consider the Flex if you plan on making the most out of its creative chops.

The Samsung Galaxy Book Flex is a new 2-in-1 laptop, with a 360-degree hinge and bundled stylus making this a versatile option for creative dabblers.

Samsung is going full force with its laptop launch in the UK this year, with the Galaxy Book S and Galaxy Book Ion also hitting British stores. But while those two devices appeal to casual productivity users, the Flex caters to entry-level creatives instead.

A gorgeous Full HD QLED display gives Samsung the edge on many rivals at this price, although the meagre GPU power prevents it from appealing to those who use demanding creative apps such as the Adobe Creative Suite.

As a disclaimer, I was sent the 15-inch Galaxy Book Flex for review, despite being currently unavailable in the UK. We’ve made sure to keep this review applicable to the 13-inch Flex which you can buy from the Samsung UK store.

The Galaxy Book Flex is available in both 13-inch and 15-inch sizes; although only the former is currently available in the UK. Both feature the 360-degree hinge, allowing the device to flip into tablet mode effortlessly. The hinge is a little flimsy though, wobbling significantly if you give it a good shaking.

Samsung sent me the 15-inch model, which feels too large and unwieldy to use like a typical tablet. Lay it down on the table though, and it’s still an enjoyable experience using the stylus for doodling and annotating screenshots. 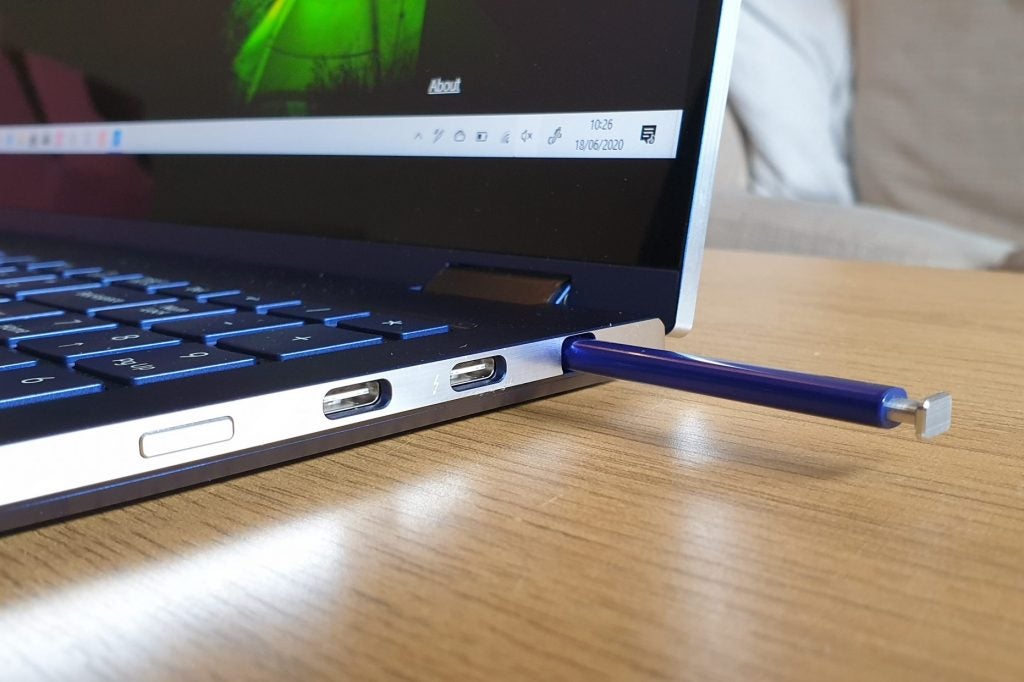 The bundled Stylus slots inside the right edge and pops out after a gentle press. When ejecting it from the laptop, the Flex will automatically give you the option to open a number of stylus-supporting Samsung apps such as “Create note”, “Screen select” and “Screen write.” They all seem pretty useful, particularly the Screen Share option for presentations.

The stylus feels good to use, with the small nib smoothly gliding across the screen. There’s a little bit of input lag, which is noticeable if you drag the stylus quickly from edge to edge, but shouldn’t be an issue for causal use.

The Flex looks great as a traditional laptop too, with the 15-inch model featuring a super-skinny 14.9 mm frame and weighing just 1.57kg. It also features a lovely Royal Blue design, which is one of my favourite colours for a laptop yet. The silver trim complements the blue fantastically well too. 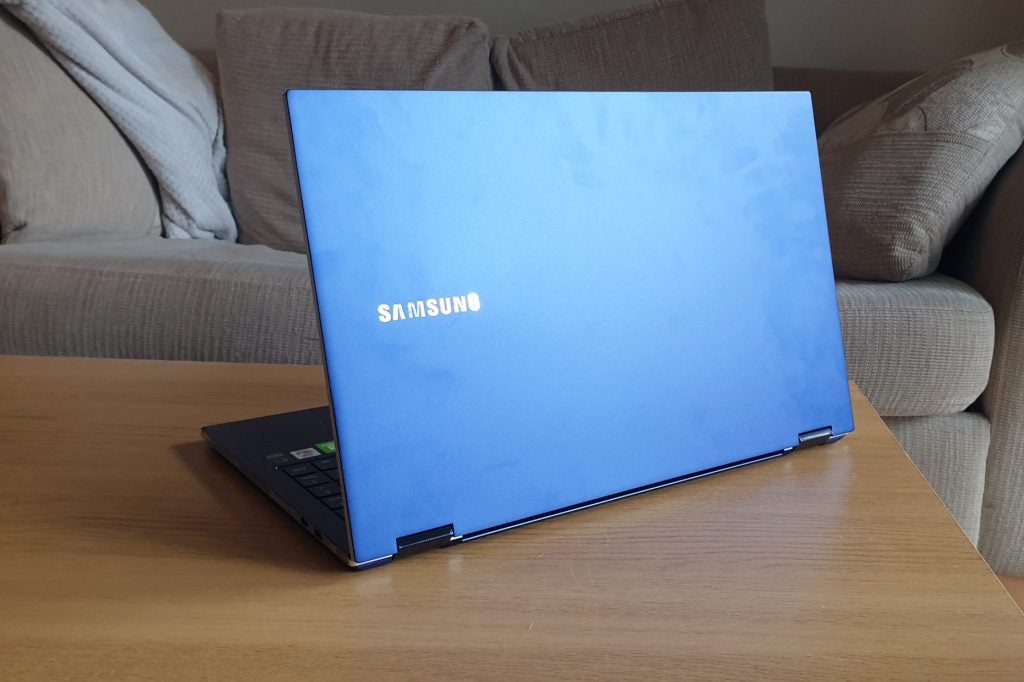 The aluminium casing is a fingerprint magnet though, and will likely need frequent wipes. Despite that, I’m a big fan of the build quality, with the Flex feeling both classy and robust.

Since the Flex is so slim, there is no space for a USB-A port, but you do at least get two Thunderbolt inputs and one standard USB-C – Samsung bundles in an adapter so you can still connect peripherals using the old USB format. A headphone jack and MicroSD slot also feature, along with Wi-Fi 6 and Bluetooth 5.0, rounding off a decent, but not spectacular offering for connectivity.

Suffering a similar issue to Apple’s Butterfly-switch keyboard, the keys on the Galaxy Book Flex feel shallow and don’t offer great feedback upon actuation. This results in a slightly uncomfortable typing experience, which isn’t recommended if you’re consistently banging out long essays.

The keys are at least large and spaced out, with a number pad even included for the 15-inch version. However, it’s a annoying that the Shift key has been squashed in half to accommodate a strangely placed fingerprint sensor. The sensor itself can’t be faulted though, always recognising my fingerprint instantly for swift logins. 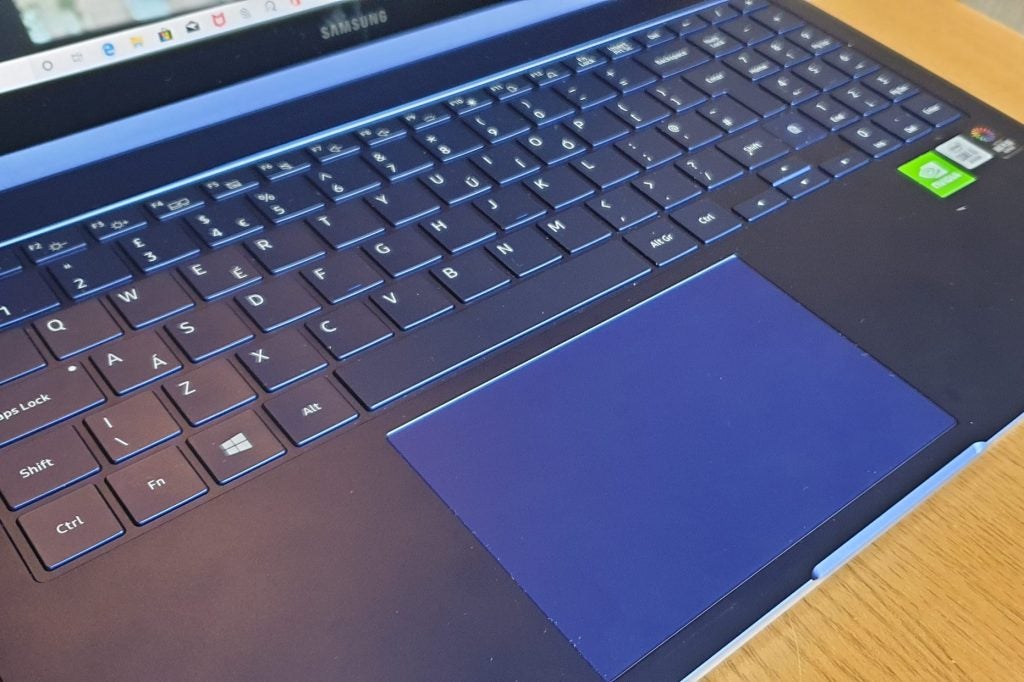 Meanwhile, the trackpad is massive and super responsive. While it’s always good to have a large surface area to use, old habits saw me accidentally right-click when I meant to left-click (and vice versa) but this is something you can quickly adjust to.

Samsung allows you to disable the trackpad via a keyboard shortcut, which comes in handy when flipping the laptop into tablet mode.

The screen quality is very important for laptops intended for creative work, so it’s great to see Samsung nail this aspect. The Full HD, QLED panel looks stunning, even when displaying the default Windows 10 wallpaper. This is a great screen for Netflix and YouTube.

The panel is noticeably reflective, but Samsung has addressed that by allowing for a high peak brightness of 460 nits – although maxing out the brightness will of course drain the battery quicker. 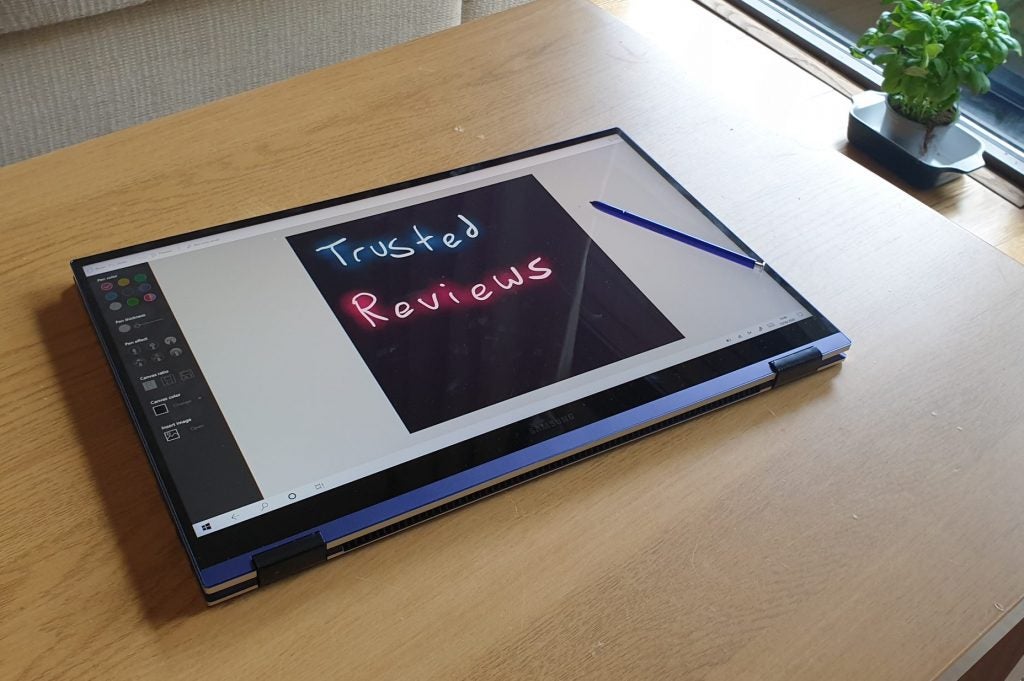 Importantly for those wanting to do some serious design work, the Flex has outstanding colour accuracy, hitting 100% coverage for sRGB, 85% for Adobe RGB and 98% DCI-P3. This means the screen will accurately present images (including photos and videos) and will therefore be more than good enough for both entry-level and professional creators.

The screen is of course touch-enabled, so you can interact with either your fingers or the bundled stylus. While you can doodle with two fingers simultaneously, the Flex intelligently won’t accept inputs from the stylus and your finger at the same time, which has likely been done to prevent accidental presses when holding the device.

The Samsung Galaxy Book Flex flaunts a decent performance, using Intel’s 10th Generation processors to power through basic tasks. Our review model features an Intel Core i5-1035G4 and 8GB RAM, which are the same specs you get with the 13-inch model available from the Samsung UK store.

Benchmark results show the performance of the Flex is similar to the likes of the Dell XPS 13 2-in-1 and HP Spectre x360 13, both of which are pitched towards entry-level creatives or those who just want the benefits of a tablet as well as a laptop.

It’s important to understand this isn’t a high-end creative machine though, as the integrated Nvidia GeForce MX250 doesn’t provide enough GPU grunt to power through intense animation and video-editing applications. But if you’re content with doodling and making notes over screenshots, the Flex proves plenty powerful enough.

The read and write speeds (3,334 MB/s and 2,353 MB/s respectively) are superb, ensuring nippy saving and loading times. The storage capacity of 256GB on my review model is pretty stingy, but Samsung offers up to 512GB on the UK store which is far more reasonable.

Most laptops struggle to hit the 10-hour mark for battery life these days, which is disappointing for the likes of students who are always moving between lecture halls and fighting friends for power plugs.

Our battery benchmark test (using PCMark 10 and lowering brightness down to 150 nits) saw the Flex last for 10 hours and 20 minutes. This is a superb result for a 2-in-1 laptop using a 10th Gen Intel Core processor. For comparison, the HP Spectre x360 only lasted 4 hours and 30 minutes, although that does feature a juice-depleting 4K screen to be fair. 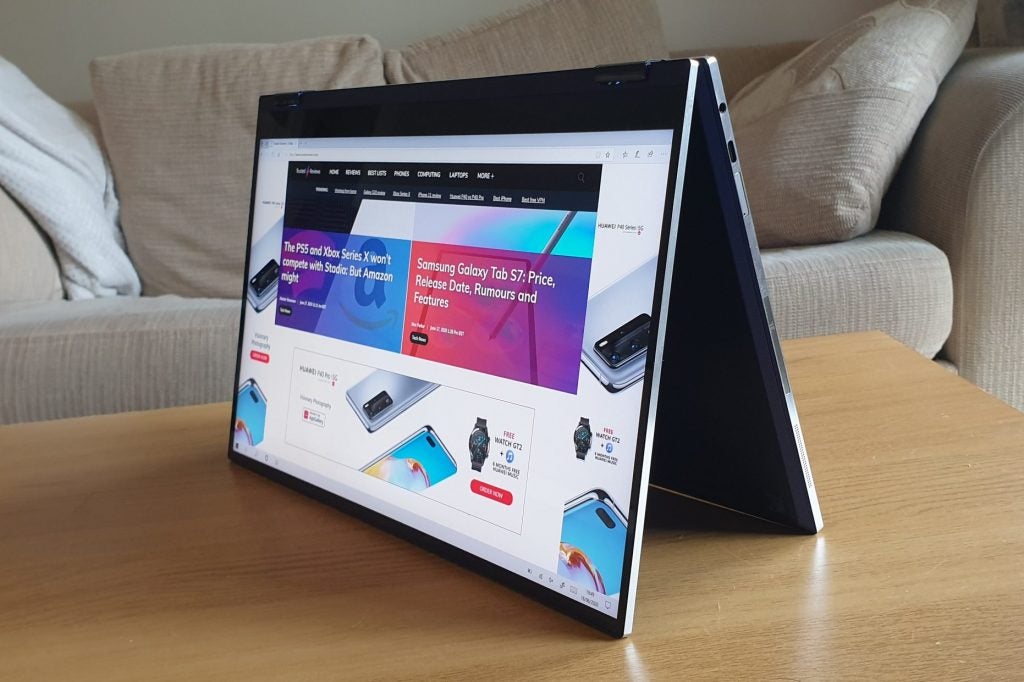 The Flex also sees a pretty nifty feature in the form of wireless power sharing for compatible smartphones. It worked well with my Galaxy S10 phone, although the laptop was fussy with the placement of my handset, making the process a bit of a faff.

Having to put your smartphone on top of the trackpad also limits your use of the laptop while using this feature; Netflix is fine, but typing up essays and web browsing will be a struggle without the trackpad.

Should you buy the Samsung Galaxy Book Flex?

The Galaxy Book Flex is one of the best 2-in-1 laptops I’ve tested. It has a lovely blue design, a stunning QLED screen, a fantastic battery life and a bundled stylus for doodling and sketching. The inclusion of a few stylus-supporting Samsung apps also helps to get the most out of the S-Pen, even if Windows 10 isn’t the greatest operating system for such input.

There are a couple of flaws, including a flimsy hinge, a shallow keyboard and the bizarre placement of the fingerprint sensor, but none feel significant enough to diminish the all-round quality of this feature-rich convertible. It is an expensive device though, with the 13-inch model available in the UK costing as much as £1349, which is a couple hundred quid more expensive than non-convertible alternatives such as the Surface Laptop 3.

With that in mind, the Galaxy Book Flex is only worth considering if you’re going to make regular use out of the stylus and 360-degree hinge and don’t need more powerful GPU grunt for professional-grade creation. If that sounds like you though, and you’ve got the money to spend, the Flex is a fantastic device and our current top recommended 2-in-1 laptop.