What is the Acer Spin 7?

Acer has completely overhauled the naming scheme for its high-end laptops, replacing the old Aspire brand with new Spin and Swift ranges. The Swift brand takes on conventional thin-and-light Ultrabooks, while the Spin series goes for 2-in-1s with 360-degree screens.

The Spin 7 sits at the top of Acer’s new range and is the thinnest 2-in-1 TrustedReviews has ever reviewed. Sadly, though, while it looks great, Acer’s made too many performance and build quality compromises to fully justify its £1,200 asking price.

You won’t find many thinner and lighter 2-in-1s. The Spin 7 weighs in at just 1.2kg, which is deeply impressive for a 14-inch laptop, and measuring in at just 11mm thick it’s about as bag-friendly as a mid-size laptop can be. 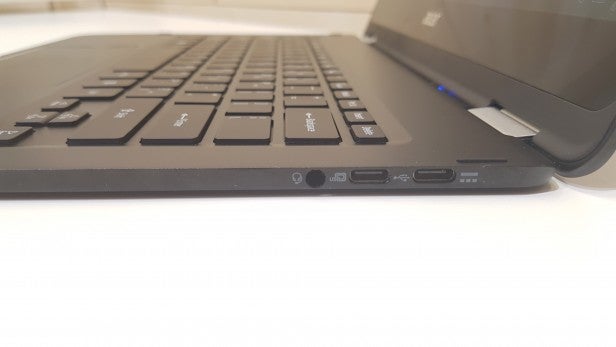 Acer has ticked the boxes when it comes to materials, too. The dark grey metal and plastic alloy looks great and is proof that black laptops don’t have to be boring. The sharp edges and lack of tapering give it a welcome MacBook Pro-esque feel, while its thin left and right bezel sides reduce the overall footprint and draw your eyes into the screen.

However, the shell of the laptop does have a bit of flex. You won’t notice it while typing, but it doesn’t have that robust feel you get from other premium laptops at this price point.

It picks up grease in a slightly less extreme way than the Razer Blade Stealth, although there’s definitely a feeling that once you’ve unwrapped it from its plastic packaging, it’ll never be truly clean again.

As is now the tradition with thin-and-light laptops, most of the ports have been chucked in the bin. There are two USB 3.1 Type-C ports, much like on the base-model MacBook Pro. However, the ports don’t double up as ThunderBolt 3 inputs and won’t support ultra-high-end ThunderBolt peripherals. If you’re stationed at a desk and charging, one USB-C port will always be occupied by the charger, so this is a bit of a problem. There’s also no SD card slot, which will annoy photographers. 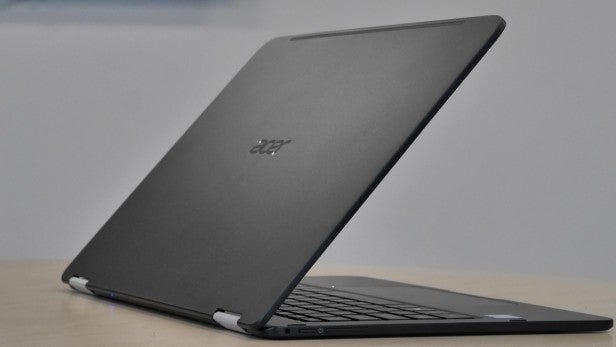 Acer kindly supplies a USB-C-to-Type-A adapter in the box, which is most welcome for those who carry a USB mouse around with them, or find themselves using USB sticks frequently. There is at least a 3.5mm headset jack for your old-world headphones.

Sadly the lack of ports isn’t the Spin 7’s only problem. The light weight of the base means the screen ends up being slightly too heavy for it when it’s tilted back beyond a right-angle. This leaves you with a bizarre effect, where the base is actually lifted off the desk when your wrists aren’t leaning on it. I’m quite surprised this problem wasn’t spotted and sorted out during development.

What’s more, if you pick up the laptop in anything other than the most gentle of fashions, the screen will fall flat (see the video review).

The keyboard on the Acer Spin 7 should be one of its strong points. The chiclet keys, while small, are coated in a grippy material and are comfortable and quiet to type on. There’s not a huge amount of travel, but enough to type for long periods without feeling fatigued.

So far, so good, but Acer has taken the bizarre decision to ditch keyboard backlights, which is incredibly mean on such an expensive laptop. 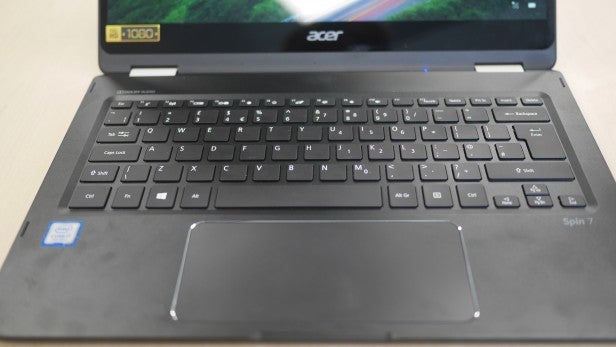 The touchpad is nice and wide, and features Microsoft Precision software tech, meaning it’s responsive to swipes, taps and gestures with no lag whatsoever. I didn’t have any issues with palm rejection while typing, either.

The 14-inch Full HD screen on the Spin 7 does a decent, if not stellar, job. It’s nice and bright, with a peak brightness of 347 nits. That’s about what you’d expect for a touchscreen laptop costing this much. Contrast is excellent as well, thanks to nice and dark black levels of 0.25 nits. The overall contrast figure I measured was 1,376:1, which is above average and makes scenes with dark and light content look great.

The only slight letdown is colour coverage. The sRGB colour gamut, most frequently used by photographers so they can accurately see how their pictures will look, only gets 82% coverage. That’s disappointing when you consider other laptops around this price manage in excess of 90%. It’s not a dealbreaker, but it certainly doesn’t distinguish the Spin 7 from its rivals.

The speakers in the Spin 7 are surprisingly loud for such a thin laptop, but don’t have a huge amount of presence, as the low end feels underpowered. You’ll want to use the headphone socket for connecting external speakers or headphones if you want to listen to a lot of music. Dialogue is clear, though, making this a fine machine for video-streaming in bed.

The webcam is fine. It’s very adept at picking out faces and doesn’t stray into the trap of darkening subjects that are backlit. The image quality is a little blotchy, but totally fine for video chatting. The microphone is reasonably sensitive, too, and while it doesn’t have anywhere like the studio feel of a proper external mic, it is, again, fine for video chats.