What is Lenovo Mirage: Jedi Challenges?

Augmented reality is cool. Star Wars is cool. Combine the two and what do you get? This Lenovo Mirage Jedi Challenges bundle, that’s what.

The Mirage is an AR headset that comes with a ‘replica standard’ lightsaber controller for playing a series of exclusive Jedi skills games, with opponents seemingly projected into the room around you. The brains are provided by a suitable smartphone running the Jedi Challenges app, which has already had a major update to expand the game.

Although lightsaber battles against iconic Star Wars villains are the obvious highlight, you can also play the Holochess game Chewie and R2-D2 argue over in A New Hope, and there’s a strategic tower-defence mode.

Jedi Challenges is more fun than an Ewok after-party. 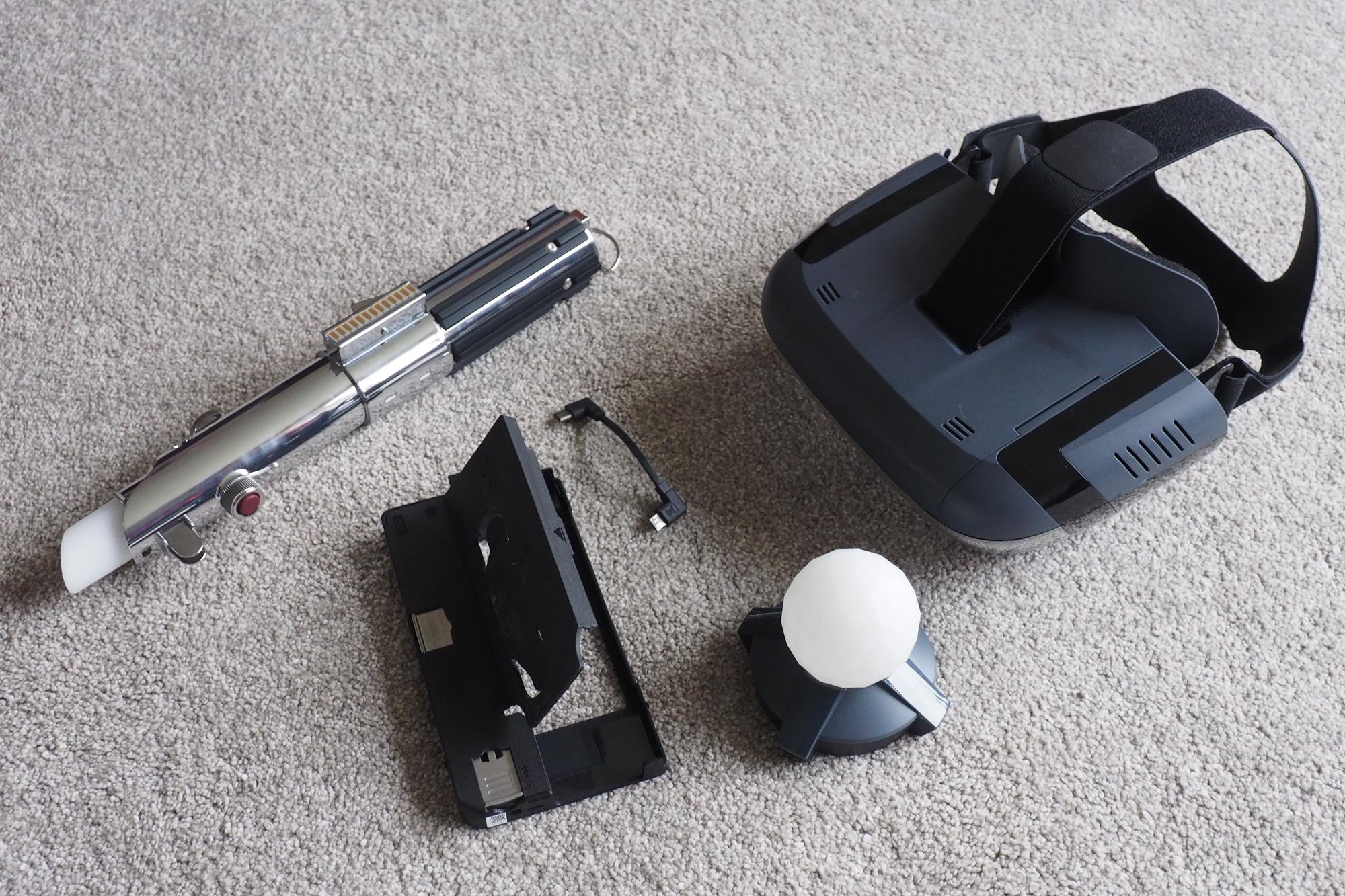 Lenovo Mirage: Jedi Challenges – What do you get?

In the box you get the Lenovo Mirage headset, the lightsaber controller, a tracking beacon, and a few USB adapter cables.

The Mirage itself is a fairly simple affair, but quite comfortable and with three velcro-fastened straps that adjusted just about tightly enough to fit my eight-year-old son. The headset is powered by an Android or iOS smartphone, which sits in a holder that slots into the side of the headset. Only a handful of phones are listed on the website as being supported, but I happily used the unlisted Huawei P10 Plus without any problems.

Motion tracking is achieved using the headset’s two front-facing fish-eye lenses and sensors in the tracking orb and lightsaber.

Although the beacon takes a couple of AAA batteries, the headset and controller are both charged through Micro USB ports. 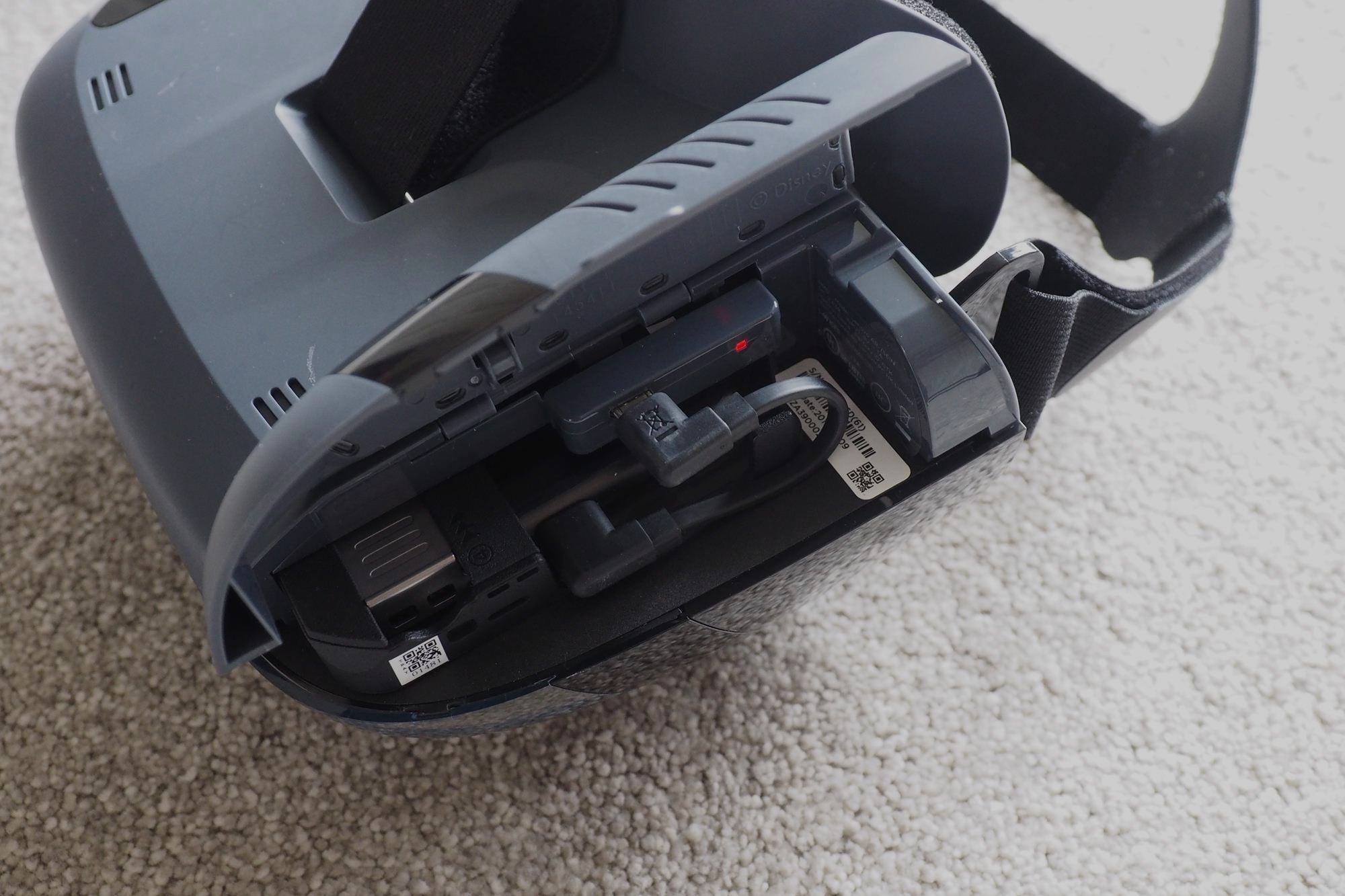 Talking of Micro USB, the short adapter cables supplied for hooking your phone into the headset are small and easily lost. It would have been nice for the Mirage to feature a specific storage space to hold one when the headset is on charge.

The lightsaber controller looks exactly like the one I saw Luke Skywalker use when battling Darth Vader many moons ago. Even the controls are identical. That does mean the buttons might be a little too far apart for smaller hands, but kids are pretty adaptable – my little boy quickly got the hang of reaching up to the little button that re-centres the blade if it gets out of whack. 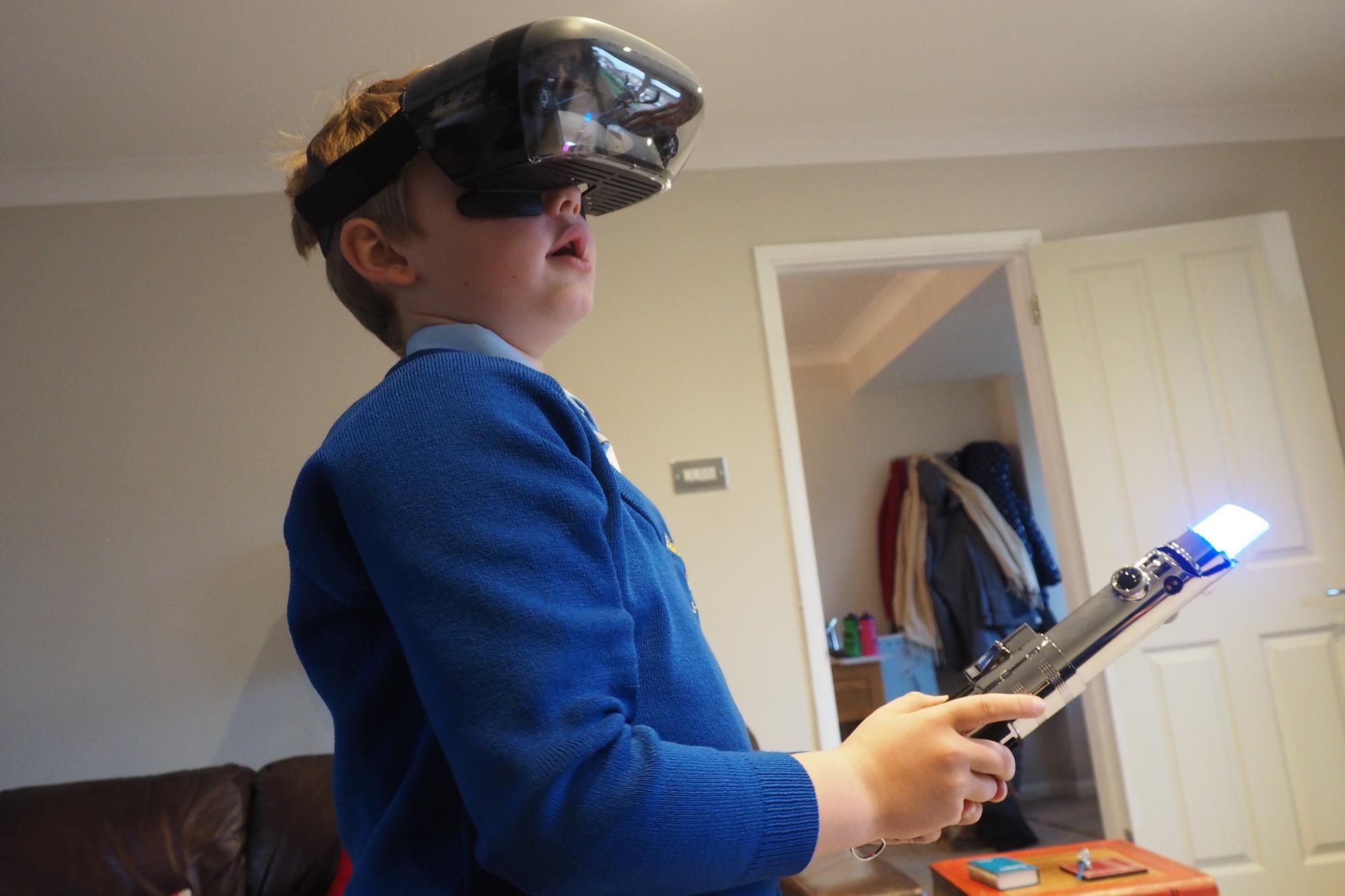 Lenovo Mirage: Jedi Challenges – How fun is it to play?

Picking up the lightsaber and donning the headset, I can’t do justice to the painstaking detail Lenovo and Disney have incorporated in creating an authentic Star Wars experience.

The premise is that you’re in training, with your teacher being a holographic lady called The Archivist. Everything she has to throw at you is holographic, too, projected from a Holocron on the floor – the position of which is dictated by where you place the tracking beacon. All of these things obviously appear on the lenses of the headset, so that they’re overlaid on the room you’re in. 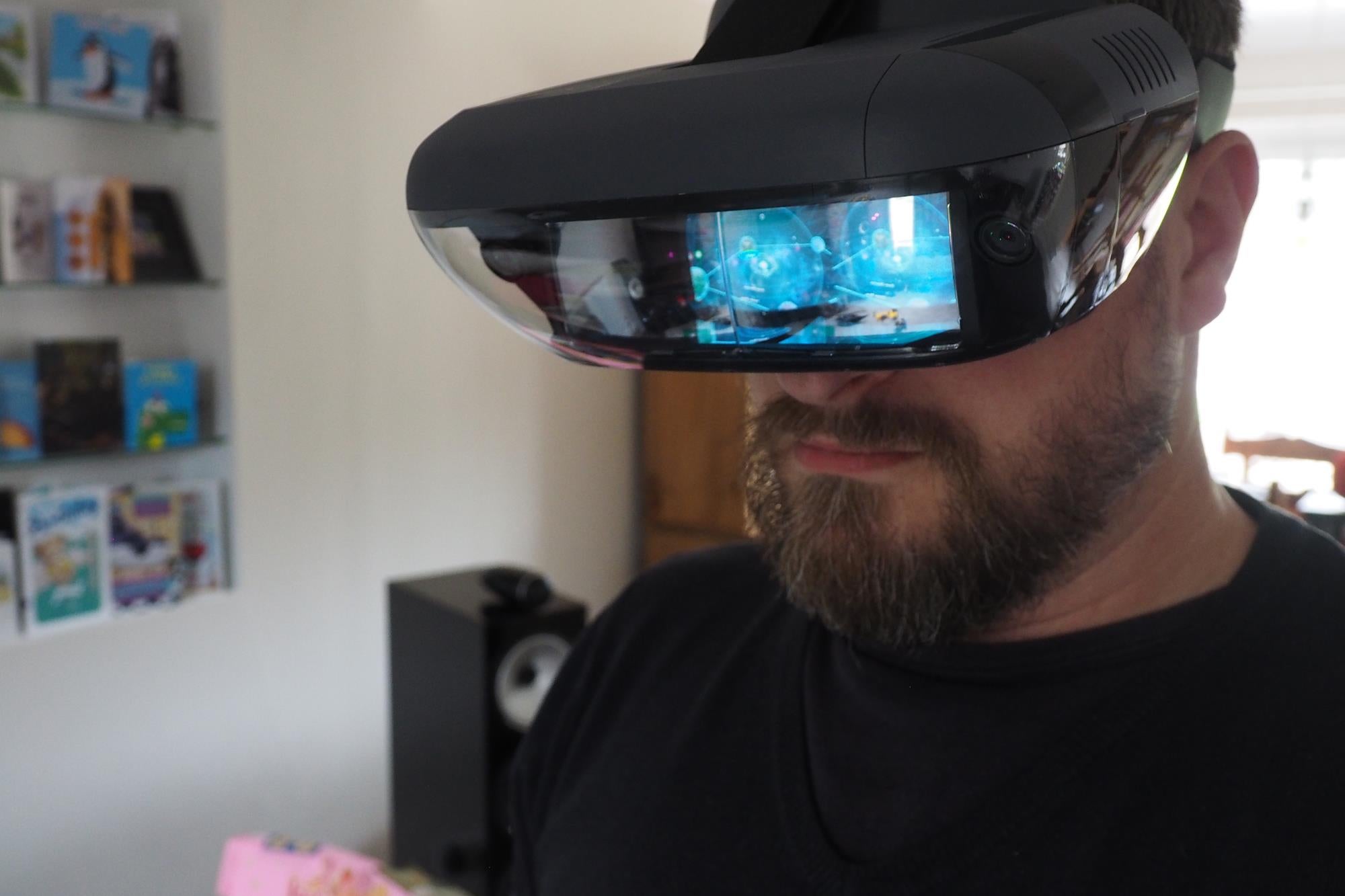 First things first, The Archivist teaches you how to use your lightsaber. A press of the long front button slowly launches the glowing blue blade from the hilt with the iconic “schhhhhzzzz” noise we all know and love. Except that the blade is virtual, of course, appearing only to the person wearing the headset. As you swish the hilt back and forth, the virtual blade follows responsively and accurately – although it does end up a bit wonky if you swipe too frantically. This can be remedied by holding the hilt straight ahead of you and pressing the reset button to realign everything.

One of the initial training exercises, you’ll be pleased to know, involves deflecting zaps from a combat remote that looks uncannily like the one Luke and Obi-Wan use on the Millennium Falcon. All misty-eyed, I was.

Once you’ve got to grips with the basics, the Holocron projects a solar system of six numbered planets: Naboo, Garel, Lothal, Hoth, Takodana, and (mysteriously) The Core. Since launch, Lenovo has added a seventh planet, Crait (from The Last Jedi), that sits outside the progression system.

If you’re familiar with the extended Star Wars universe, you might already have an inkling of who you’ll face on the first five planets. (My son guessed them all correctly, kindly filling in the blanks for me. Yes, it seems I’ve got that old already.)

As you might expect, all the numbered planets are locked except for one. You start with Naboo and the trials by combat – where, again, only the first opponent avatar is unlocked: a B1 battle droid. This is a little misleading, since you’ll actually face multiple waves of them, as well as the odd B2 super-battle droid.

They appear out of saber reach to begin with, all blue and hologrammy. Your force sense lets you know when they’re about to fire, with the visual cue being their guns turning red. Place your lightsaber in the way of the bolt and you block, but swipe towards the bolt and you can deflect it back at the droid. Some, though, are stupid enough to come close enough to strike down directly. 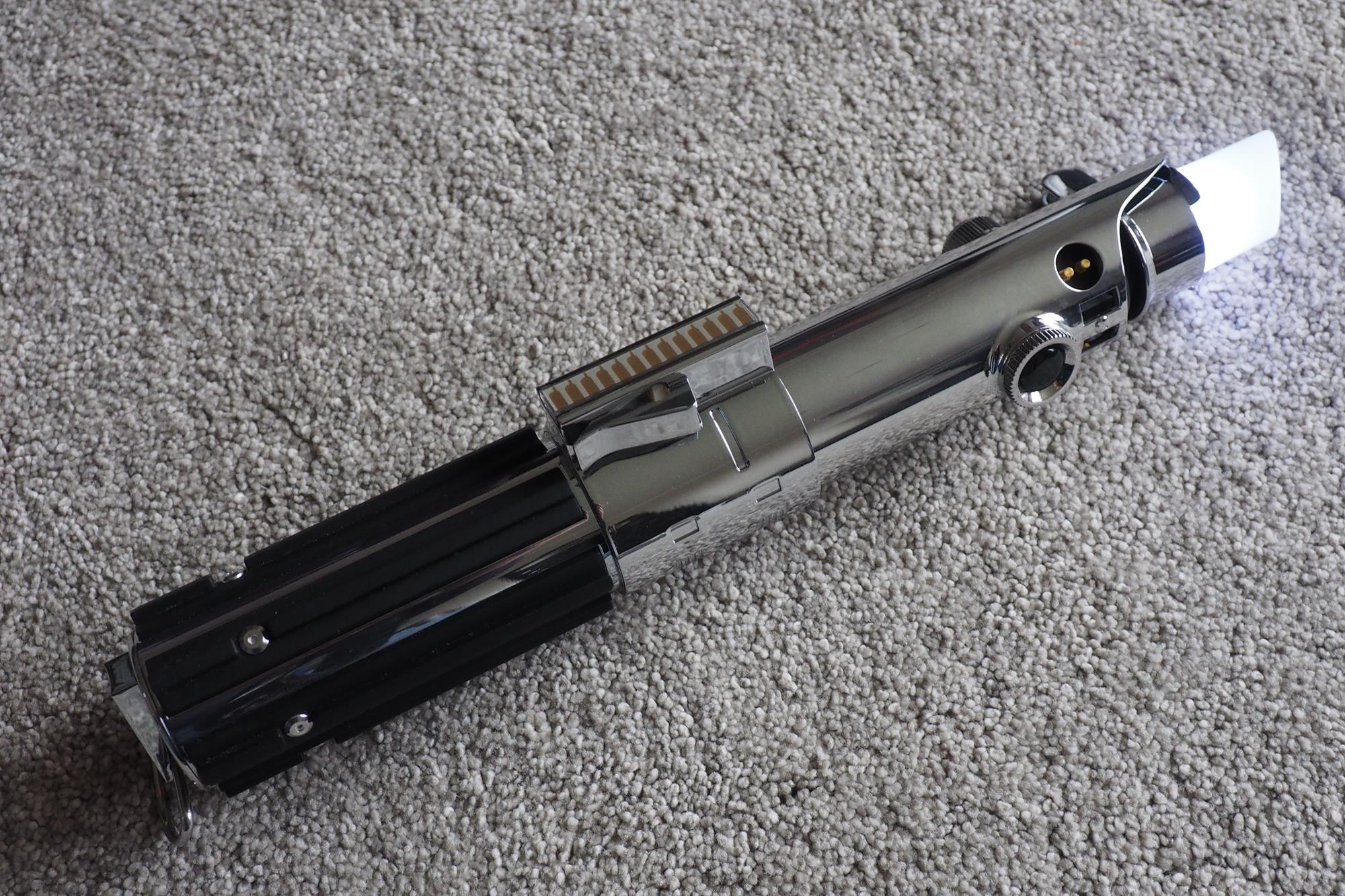 Complete two levels of this and you get to the first boss, Darth Maul. This is the real meat of the game. Just as you can sense a droid or Stormtrooper firing a blaster at you, you also know when and where a duellist is going to swing at you – only this time you get a yellow line showing where you need to position your lightsaber blade.

Blocking isn’t as simple as it sounds, though. Some attacks are frenetic, and some opponents are too good to read – in this case, multiple yellow lines appear, and you have to guess which to trust based on your rival’s movement.

As you get further on, you’ll need to dodge as well as block, with arrows appearing to show which way to sidestep or to duck. Force skills are also earned every time you beat a boss, adding to your arsenal. It’s all pretty ace, to be honest. 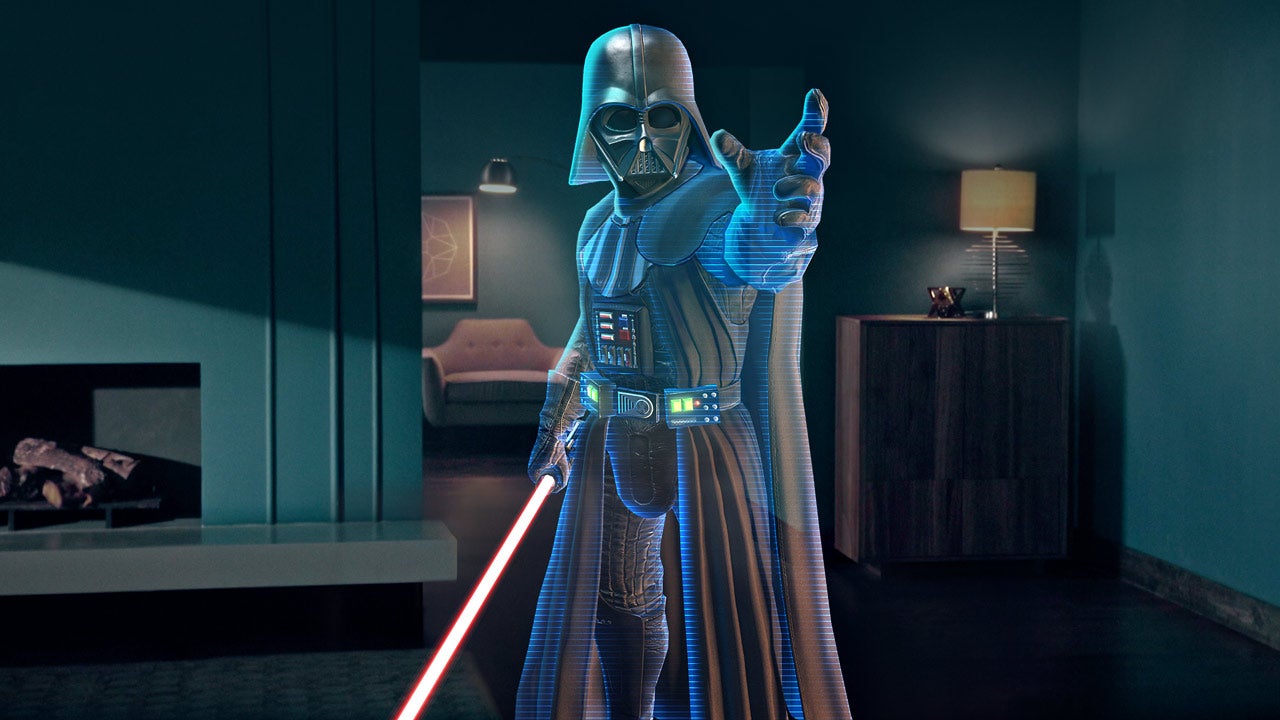 The problem is that the boss battles are great fun, but the two levels that precede them on each world become a little tedious. Stormtroopers, again? Yawn. Snowtroopers? Just Stormtroopers in disguise. It’s a shame there weren’t a few more saber-wielders thrown in to mix things up. Fifth Brother, Count Dooku, Asajj Ventress, General Grievous… There were plenty of others to choose from, and hopefully some will find their way into future app updates.

Thankfully, the first major update, which added the planet of Crait, has brought with it more interesting Stormtrooper Executioners and Riot Control Stormtroopers, which require different tactics. The final battle is also a step in the right direction, with a pair of Praetorian Guards providing a unique double duel.

The graphics aren’t too bad – they’re a bit pixellated and juddery when characters get close, but they’re generally nicely drawn. They’re almost made more acceptable by the fact that it’s supposed to be a holographic simulation anyway.

I did find the interface to be a little unintuitive, though. To begin with, I actually missed the fact that each world is actually split into three sets of trials: Combat, Insight, and Leadership. Combat is obviously the lightsaber fighting, while trials of Insight involve playing games of ‘Dejarik’, the Holochess that R2-D2 plays with Chewbacca in A New Hope. This is the least enjoyable part of Jedi Challenges, in my opinion. 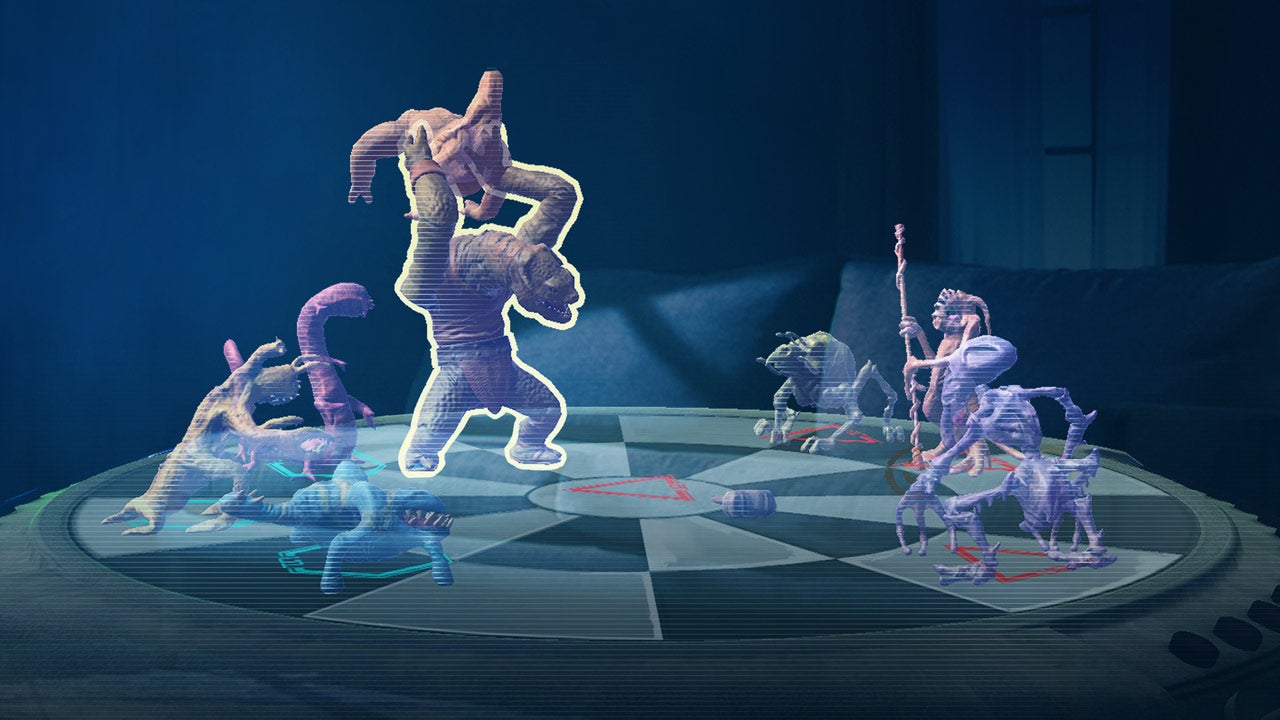 The Leadership trials are RTS tower-defence missions with a difference – namely that it looks like your troops and weaponry are all laid out on the floor around you. This actually makes it quite challenging, as you constantly need to look around you to avoid getting outflanked.

In some ways, it’s a shame that this RTS gameplay is limited to a set series of missions that have to be unlocked in sequence. It would have been more compelling if the scenery was randomly generated and the objectives mixed up a little, adding more value to repeat play. It gets tough very quickly, too. 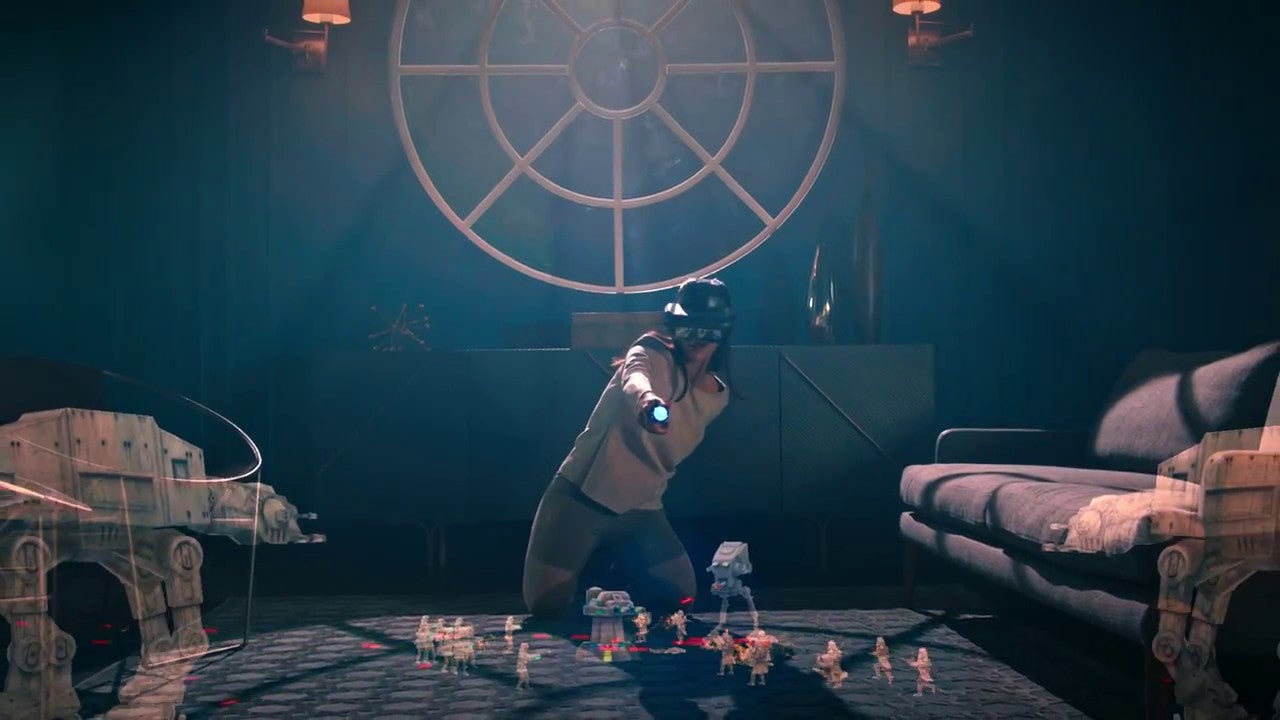 You can’t manually change the difficulty level of any of the trials through settings, but aside from the Leadership trials, things do ramp up at a steady pace. Once you’ve completed the first five worlds, you have to go through them a further two times, with increasing toughness, before you can take on The Core.

On the whole, I really enjoyed Jedi Challenges, but for the money I think it probably needs to offer a little more longevity. Not just in taking a linear route from start to finish, but with incentive to revisit. Hopefully, some app updates will introduce new features and new characters.

The only other issues I had were with my phone overheating inside the headset after less than an hour of play, and that the more frenetic lightsaber battles require quite a dark room or you can easily miss some of the indicators of where to block. The latter’s easily remedied, but the former might prove annoying if you’re stuck and determined to get past that one tricky challenge, no matter how long it takes.

Jedi Challenges is really, really fun. If you love the Star Wars universe, you’ll love this – for a while, at least. Does that mean it’s worth the money? I reckon so.

If the AR/VR side of things seems more attractive than the Star Wars connection, It’d be tempting to put that money towards a PS4-plus-PSVR combo, which is a better long-term investment. However, that won’t get you a duel with Darth, will it?

A delicious augmented-reality setup that will delight Star Wars fans.