We’ve recently looked at and been impressed by Klipsch’s latest line of earphones, which include the lightweight single driver Images and the dual driver Custom-3s. Indeed, if you have an iPod either of these sets will be a great choice for music on the move. However, when it comes to listening at home earphones are hardly the most practical or comfortable way of doing so. For that you’ll be wanting a loud speaker system like an iPod dock, or a Hi-Fi, which is where the Klipsch iGroove SXT comes in.


This compact iPod dock features, well, very little really. Like most iPod docks it contains a set of speakers, an amplifier, the docking mechanism, a video output, an extra line-in socket for plugging in an alternative audio source, and a basic remote for controlling the whole lot. It’s the same with 90 per cent of these sorts of devices and it’s no surprise to see Klipsch sticking rigidly to the formula. What then separates the likes of the B&W Zeppelin from the Bose SoundDock Portable is all the little (and some not so little) details.

Starting with the most obvious of these, the looks of the iGroove are certainly more on the budget end of the scale. The chassis is made from rather cheap looking, and feeling, grey plastic that has a few silver painted ”highlights” to try and stave off the otherwise mundane feeling – it hasn’t worked. The whole thing is also a little bit rough around the edges, literally, with moulding seams and edges being left unfinished. It really is a tad disappointing considering Klipsch is a company we would normally expect good things from, even considering the price.


On the plus side, while nothing particularly inspiring, the actual styling is rather nice especially once an iPod is in situ. The gentle sweeping curve of the front and slightly reclined stance both draws the eye to the iPod and lends the iGroove an unobtrusive casual air. Essentially, this isn’t a fashion item but neither is it going to let down your décor, no matter how obscure. 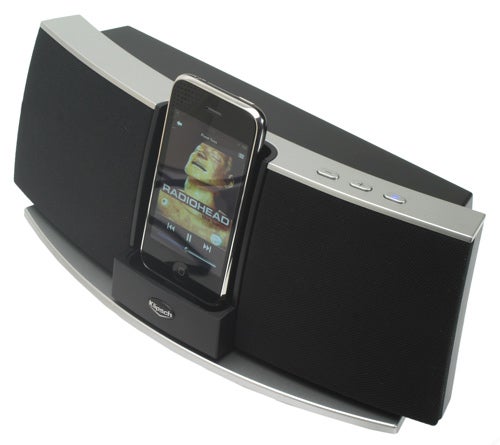 Next we come to the dock mechanism itself, which means we unfortunately have to don our negative caps again. The iGroove uses the standard iPod dock design which employs a plastic insert to hold the iPod steady on the plug, preventing it causing undue stress to the connection. The problem being that with every different type of iPod you need a different plastic insert so you end up with half a dozen of the things to keep hold of or, more to the point, lose.


Ok, it’s no worse than many alternatives and it’s arguably unlikely you’d need to change the insert very often but ever since seeing the ingenious universal iPod docks used on the Bowers and Wilkins Zeppelin and the Fatman iTube ValveDock, every other dock we see that uses these plastic inserts just seems ill conceived and clunky. Again, though, you’re unlikely to find a better alternative for the price.

Another, inherent problem that plagues many iPod docks is the S-Video connection on the back, and the iGroove is no exception. It works just fine, enabling you to pipe video from your iPod to your TV but the problem is it doesn’t work with the majority of the modern iPod range, including the iPhones, as Apple recently changed the way video is output from its devices. As we say, though, this is a common problem that you’ll find with most iPod docks.


Elsewhere the SXT is pretty light on features with just a line-in jack on the back for plugging in an alternative audio source.

There are just three controls on the unit itself, which handle power and volume. So, additional functions like skipping tracks and pausing playback must be controlled using the included slimline remote. This is pleasant enough to use with responsive and clearly labelled buttons. However, its lack of backlighting for the buttons and its tiny proportions means it could easily get lost.


Also, for more advanced functions such as choosing albums, adjusting playback settings and finetuning playlists, you must resort to using the controls on your actual iPod. This is particularly annoying as the iPod is recessed into the dock making it near impossible to control when plugged in.


Finally, at least on the features front, as with most iPod docks the SXT isn’t certified to be used with either version of the iPhone and it doesn’t even charge the iPhone 3G when docked. However, if you ignore the error message that pops up when you insert an iPhone, you can at least playback music – you just might get those horrible beeps and squeals that mobile phones cause, every now and again. 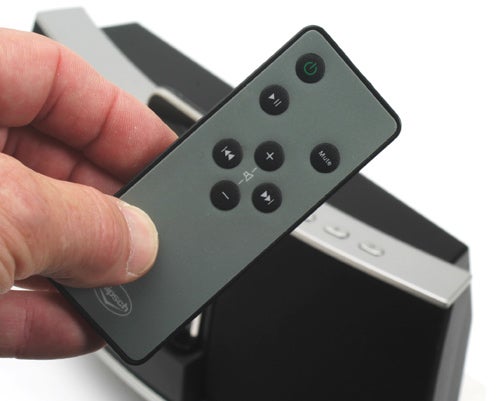 The iGroove SXT is mains only but this is one foible that we don’t lament because the SXT actually uses relatively large and weighty speakers, which require quite a bit of power – 30 watts to be exact. And it’s here that the SXT really starts to right its earlier wrongs. What money Klipsch has saved with the cheap external design, it has obviously been putting aside for the speakers and amplifier circuitry inside.


Obviously, given the unit’s size, it’s not going to compete with a proper Hi-Fi, or larger more expensive iPod docks. Nonetheless it’s a very pleasant listen with a warm yet detailed sound that has a surprisingly strong bass presence, whether using an iPod or plugging in our Creative Zen through the auxiliary port. Certainly compared to the bargain basement £50 iPod docks you’ll find on the high street, the iGroove is light years ahead. Our only real complaint would be the limited volume it can achieve. It’s fine for listening in a small room like a bedroom or kitchen and could even stretch to background listening in a living room but this certainly isn’t going to double up as a party Hi-Fi.


All told then, considering its relatively budget price of just £90, this iPod dock is actually pretty good value. Obviously if you particularly value video output then you may want to look elsewhere and a Hi-Fi replacement this certainly isn’t. However, if all you want is an affordable, easy to use, decent-sounding iPod dock, and you aren’t too bothered about looks, then the Klipsch iGroove SXT is definitely one to consider.