Available on PS4 (version tested)
Where’s the best place to start with a notoriously difficult genre like fighting games? Sure, everyone is capable of mashing buttons, but there’s no long-term satisfaction. If you want to get good, you’re going to need to practice.

Some fighters are better at easing you in than others. The King of Fighters has always had a reputation as a hardcore favourite. The combination of an incredibly varied roster plus a high ‘execution window’ for moves and combos has ensured that the series has long held a place in the hearts and minds of dedicated fans, rather than the casual audience who could pick Ryu out of a line-up any day but have no idea who Kyo Kusanagi is. 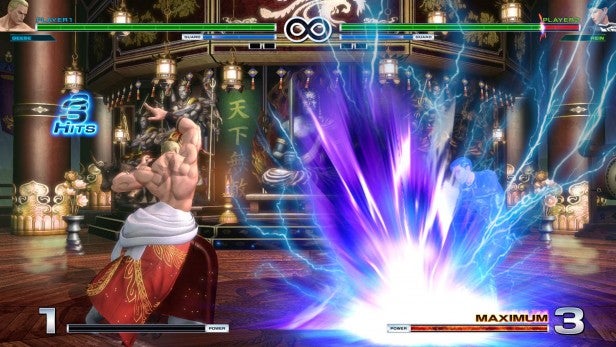 Initial impressions are strong, as a lot of the complaints thrown at Street Fighter V at launch simply don’t stick here – KOFXIV is a fully featured game right out of the box. A whopping 48 characters and two additional unlockable bosses, each with their own unique fighting style, give it one of the biggest rosters in the genre. There’s a story mode, nonsensical plot in tow. It’s not the prettiest, but it’s considerably better looking than its original trailers portrayed. Backgrounds – a place where SNK games have always excelled – are vibrant and full of life, while characters, although lacking the detail of their 2D counterparts, are well animated.

There’s a robust Training mode, allowing you to tweak every aspect of combat in order to practice specific techniques, and a challenge mode that very quickly goes from basic combos to bolt-hard multi-part ones that require serious finger gymnastics.

Despite this, game ‘Battle Designer’ Yasuyuki Oda has stated this is the ‘easiest to play’ of the series, which although true, doesn’t quite paint the full picture. King of Fighters demands very precise inputs to perform moves. It’s a game that requires you to learn a considerably larger amount of character matchups compared to most other fighting games and – although you can play one v one – KOF is a team game, so you’re going to have to learn at least three of the roster in order to have a chance.

Unfortunately, the concession to accessibility in KOF XIV is very poor. If you mash the light punch button, after the second hit, you will begin an automatic combo. If you’ve got any amount of special meter, you’ll end the combo with a super attack. The damage on these combos is scaled back so you can’t just beat everyone with one button, but then, what exactly does repeatedly hitting one button teach you? 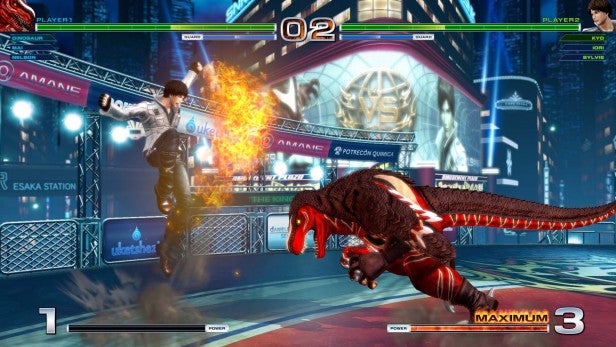 Killer Instinct has a mode that allows you to perform combos by pressing a single button, but unlike KOF XIV, it still taught you a few things, like having to ‘cash out’ your damage with a combo ender. It allowed newcomers a way into playing the game alongside more skilled opponents but also educated them on how to gain the required skills to take off the training wheels.

It’s a strange decision, because ultimately King of Fighters XIV is very much a game aimed at the skilled, hardcore fighting game community. Most players I have talked to about this auto-combo have stated that they’re simply not going to use it, and those that would benefit from a leg-up don’t get enough out of it to better learn the game.

At this pre-release stage, the online play seems stable and has similar lobbies to that of the Guilty Gear Xrd series. You connect to a room, basically a virtual arcade, and can take a seat at one of eight ‘machines’ where other players in the lobby can join, or you can watch what is happening on another, waiting your turn in a winner stays on setup. It’s really cool and means there’s significantly less waiting around than Street Fighter 5’s Battle Lounges. Hopefully, the quality of online play remains after launch, but the early signs are that it’s solid, crucial for a fighting game in 2016. 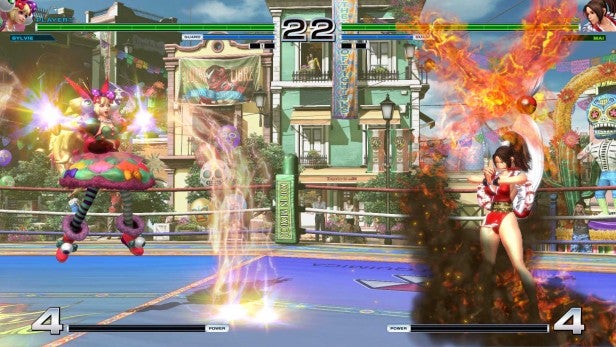 KOF’s big return has come at a time where genre is in rude health. The Street Fighter V finals from EVO just appeared on live US TV, while all of the others are reporting record streaming figures.

There’s a buzz again, and a community has formed that would be receptive to the return of this classic fighter. A lot of new players have no doubt picked up SFV or Mortal Kombat X and this would be their first taste of King of Fighters. Should they be passionate about the genre and willing to put in the time, they’ll find a game here that has considerable depth and plenty of ways to express your play style through the healthy amount of fighters on the roster. For the more casual audience, they might want to look elsewhere.

King of Fighters XIV is very much a new KOF game. It retains all of the hallmarks of the series, from the beautiful backgrounds and giant roster to the challenging combos and large amount to learn. If you’re into the genre and are looking for something that will reward you for putting in time, then SNK’s reputation for building fighting games that allow for that should speak for itself.