Killzone games have always looked good, so it’s no real surprise Sony picked Killzone 4: Shadow Fall to be its key PS4 exclusive launch title. It’s just the kind of game to make loyal PS3 owners upgrade. After Killzone: Mercenary delivered the fantastic PS Vita FPS we have craved for so long, Shadow Fall ventures into a world that takes full advantage of the next-gen bump in hardware and hopes to do the same for the PS4. 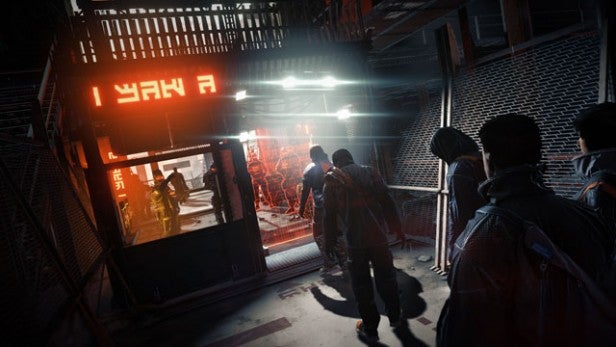 We’ll pick up that question later, but first some scene-setting. For those not familiar with the Killzone universe, the latest conflict takes place on the planet Vekta. Set after the events in Killzone 3 where the Helghast’s planet is destroyed, the ‘bad guys’ (that’s the Helghast) now reside on the same planet as the Vektans separated by a security wall. Peace reigns for thirty years, but it’s to no one’s surprise (least of all ours) that this doesn’t last.

In Shadow Fall you play Lucas Kellen, who we first see as a young boy in the opening moments of the game witnessing his father being killed by Helghast soldiers as they try to flee their city on Vekta. Naturally these events have a profound effect on our protagonist as he’s left to be mentored by a Shadow Marshall who rescues him. Fast forward to the present of the game and Kellen is now a morally corrupt special forces type who operates behind enemy lines.

So far, so generic, but that tag is a little unfair. Previous Killzone games have drawn upon historical and contemporary events to shape the storyline and Shadow Fall follows the trend with clear Cold War undertones emphasised by the mistrust between the two warring factions and internal strife this creates.

It’s a valiant attempt to steer clear from some of the more clichéd single-player campaigns we often see in most shooters. Rather than just a black and white good vs evil type affair, Killzone: Shadow Fall creates a scene in which two peoples are trying to coexist on one planet with all the problems that creates.

It doesn’t quite come off, however. While the themes are interesting enough, it doesn’t really come together as a cohesive whole in the same way a Bioshock Infinite does, for example. It’s all too easy to lose track of the exactly where the plot is going and why, while the voice acting and dialogue is workmanlike rather than engaging. Guerilla Games has tried to create an interesting narrative tension, but it still feels like the story comes a distant third behind the visuals and the gunplay. And if the likes of Mass Effect, Bioshock and Halo have taught us anything, it’s that a good story can make or break any single-player experience. 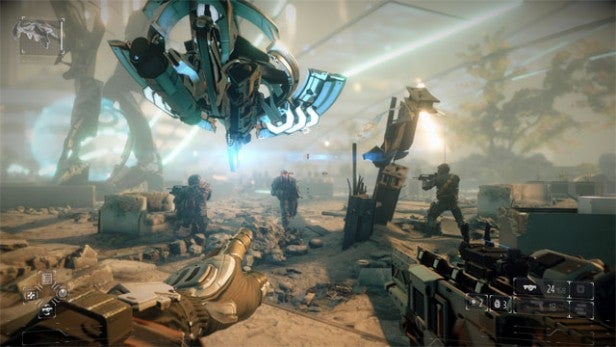 But if the story sometimes lacks that immersive pull, the visuals do much to compensate. Killzone: Shadow Fall in 1080p HD is stunning. It’s one of the nicest looking PS4 launch titles and you will often find yourself staring around at how gorgeous the landscape is. The backdrops are amazingly detailed and natural looking and the way lighting breaks through gaps to obscure your view really showcases what the PS4 is capable of. As an example of what ‘next-gen’ entails Killzone 4: Shadow Fall does its job very, very well.

This and the typically impressive gunplay is probably exactly what loyal Killzone fans are after. Sniper and machine guns take time to reload, but still fire off with a satisfying thud as you plough your way through Helghast soldiers. Weapons are now more versatile as well and your default arm can be set to a work as a sniper rifle, with its barrel extending and a scope appearing for firing at range. You can go all guns blazing, but the new sonar locator helps you take a more stealthy approach — an approach balanced by the fact overuse of the sonar will alert nearby soldiers.

Another combat enhancement introduced for Killzone: Shadow Fall also gives us a chance to use the PS4’s touchpad for the first time in anger. When you are outnumbered, you can get a helping hand from a small drone called the OWL. Hitting L1 to activate the OWL, you can swipe in different directions on the touchpad to command the OWL to put up a shield, hack into computers, send out a zip-line and stun or fire at enemies. If you’ve been killed, the drone can revive you as long as you still have a Stim pack spare. 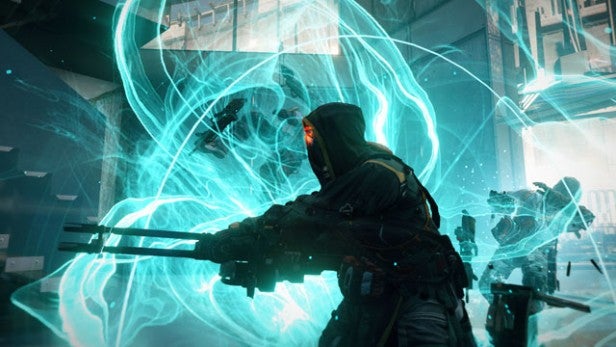 You will need all the help you can get, too, as the Helghast AI has clearly been ramped up and definitely takes more than a few rounds to take down the orange-goggled Helgahst soldiers. If you don’t turn off alarm systems the hordes will keep on coming at you, making it easy to die if you don’t play smart. This stops Killzone from descending into too much of a mindless run and gun affair.

As does the greater freedom to explore, which means more opportunities to show off the controller support like the ability to play back audio logs uncovered from rooms through the DualShock 4’s built-in speaker. That said, it’s still largely a linear affair where your simple goal is to complete missions to get from A to B, while the more open environments also mean you’ll sometimes find yourself wandering aimlessly for your next objective.

All told, the single player campaign is an enjoyable distraction with some spectacular set pieces, but the patchy storyline and so-so level design means it’s not the most memorable. That’s a real shame as there are moments where Shadow Fall excels, but it feels as if Guerrilla Games never quite pulled everything together as tightly it could.

Which leads us to conclude that the multiplayer really is still the key ingredient. We’ll return for a greater exploration of this soon, but it’s a familiar setup based around a class system where you can select from Assault, Recon and Support classes with 12 unique special abilities. It serves up old favourites likes capture the flag, domination, and deathmatch, but there’s also a custom option to create your own levels and share them with other players that could prove to be Killzone: Shadow Fall’s most interesting feature given Sony’s claimed focus on social gaming.

Killzone: Shadow Fall is a beautiful-looking game and the perfect visual showcase for the PS4’s hardware. The DualShock 4 controller support gives us a promising look at how other PS4 games can embrace the touchpad and speaker features as well. As shooters go, it’s a solid effort. The ambitious story is not perfectly executed and the more open environments actually do more harm than good sometimes, but any Killzone fan will enjoy the single-player campaign and the visuals are as stunning as the trailers suggest.