Available on Xbox 360, PS3, PC (version reviewed)
Can you ever recapture the magic of that first descent into Rapture? It’s the one question that Bioshock Infinite struggles to answer.

The wonder of the original Bioshock was that it took us somewhere completely new then delivered a story-led experience the likes of which we’d never seen before. Here was a miraculous city beneath the waves, crammed with art deco architecture and period atmosphere, and here was a story that shocked, surprised and made you think. It’s not that Bioshock’s elements had never been combined before, but they’d never been combined in such a way, with such power and with such intelligent, deliberate intent. 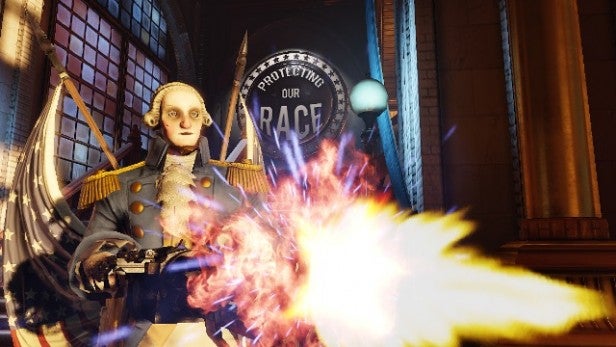 Bioshock Infinite doesn’t have this advantage. As stunning as its new setting is, it’s made of much the same stuff of Bioshock. Sure, the old power-giving Plasmids are now Vigors while the city’s in the sky, not in the sea, but while Bioshock Infinite is by turns magnificent, awe-inspiring, all-absorbing and every other superlative you might care to throw at it, it never quite feels so strange, fresh and new.

The question is, can it find its own identity, or is this one of those sequels doomed to live in the shadow of a ground-breaking original?

Within a few hours of play, the answer becomes clear: Bioshock Infinite is more than simply Bioshock in the skies. While it might share common DNA with its illustrious forbear, and feel very similar in the moment to moment gameplay, it’s a different experience. In a way, it’s the gaming equivalent of The Godfather Part 2.

While both The Godfather and its sequel concern gangsters, corruption, family and the corrosive lure of power, and both involve scenes of drama punctuated by sudden bursts of violence, there’s no way you could call the second part a retread. The same holds true here. Bioshock Infinite is a continuation, but one that takes the ideas and aesthetics of its predecessor in a new direction. 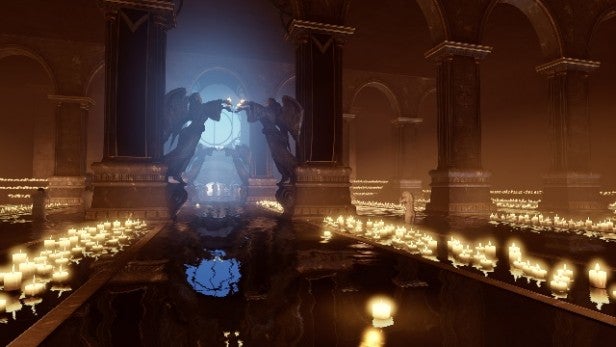 Spoilers are a problem in any review, but with Bioshock Infinite the story is the key to the whole experience. The less you know when you load the game up, the better.

All you ought to know is that it’s 1912, that you play a Pinkerton private eye with a shady past, and that you’ve been sent by unknown agencies to the floating sky city of Columbia to retrieve a girl. It turns out that the girl, Elizabeth, has mysterious powers, and that getting her out won’t be as easy as you thought. In fact, it’s going to be very hard indeed.

Bioshock Infinite: Life and Death in the Skies

Columbia is not Rapture Mark 2. Where Rapture was in the midst of both a moral and physical collapse, Columbia appears to be a city in full working order.

Admittedly, with its religious fundamentalism, barely-concealed racism and totalitarian leanings it’s not a city you’d want to spend too much time in, but where Bioshock’s motifs were art deco beauty, rust and leaking water, Infinite starts off with sunshine, 1900s American and colonial splendour, before a rapid descent into darkness, anarchy and horror. It’s Disneyland Main Street with a dark side. 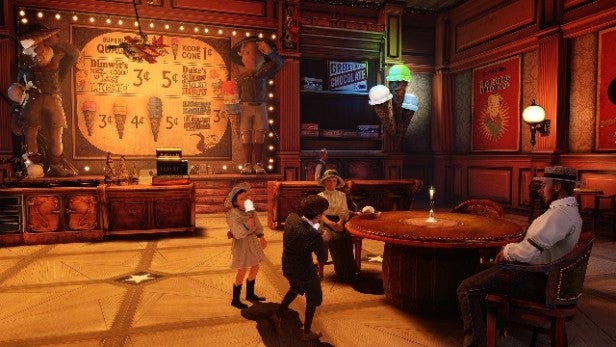 Where Rapture had gangs of Plasmid-wielding mutants, Columbia has well-armed police and military forces, backed up by steampunk mechs and psionic freaks. Less obviously but more importantly, Rapture was a city of fairly small spaces, with even its grander areas quite compact. Columbia is a city of large civic spaces and towering buildings, where multiple levels are connected by rollercoaster skyrails. In Rapture the tommy gun and the shotgun were generally the tools of choice, but in Columbia you’ll find yourself reaching for the carbine and the sniper rifle.

Bioshock lived and died on its sumptuous visual design and smog-thick atmosphere, made up not just of its period aesthetic, but of the sound design, the music and the exceptional use of light and colour.

Bioshock Infinite repeats the same tricks, and the graphics are even more dazzling. It’s a stunning game on console, but on the PC with detail levels and textures set to maximum it looks incredible – not photorealistic in the style of Crysis 3 but painterly, like a moving work of art. Pay attention to the music, too. We don’t want to spoil anything, but there’s a genius in the way the game takes the familiar somewhere strange and new. 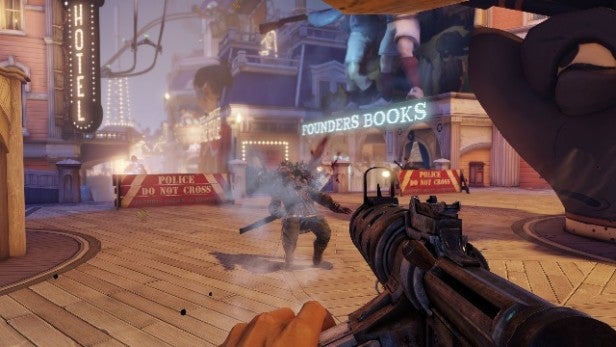 Bioshock Infinite: Combat
In terms of combat, the basic feel will be very familiar. Columbia has its own version of Plasmids in its Vigors; liquors that, when drunk, reveal new psychic energies, allowing you to throw fireballs, send out trails of vicious crows at your enemies or suck in and discharge hostile fire.

Most have a secondary fire mode, enabling traps or alternative attacks, and they’re fuelled by vials and bottles of salts, meaning there’s no moral choice involved in getting more. Meanwhile items of clothing take the place of Bioshock’s passive tonics, increasing your resistance to damage, adding ammo capacity or hitting incoming melee attackers with a dose of their own medicine.

Next
Bioshock Infinite: The Verdict Review