The Kenwood kMix Chrome Collection Stand Mixer KMX760 is sturdy and reliable, but the RRP for the shiny metallic finish is a little steep. Nevertheless, it excels at beating, whipping and kneading, and boasts a soft start and a folding function. All of the removable parts are dishwasher safe, too. This is a solid appliance that can handle pretty much anything you throw at it.

What is the Kenwood kMix Chrome Collection Stand Mixer KMX760?

The Kenwood kMix Chrome Collection Stand Mixer KMX760 is part of the new range of kMix kitchen appliances that all come with shiny metallic finishes. As with the other products, this mixer is available in chrome, black chrome, gold and rose gold.

While it’s a quality appliance, with a sturdiness not far behind its rival KitchenAid mixers, the price here is hefty.

Nevertheless, the overall mixing performance, as well as the gentle folding setting and the “soft start” function make the KMX760 a pleasure to use. 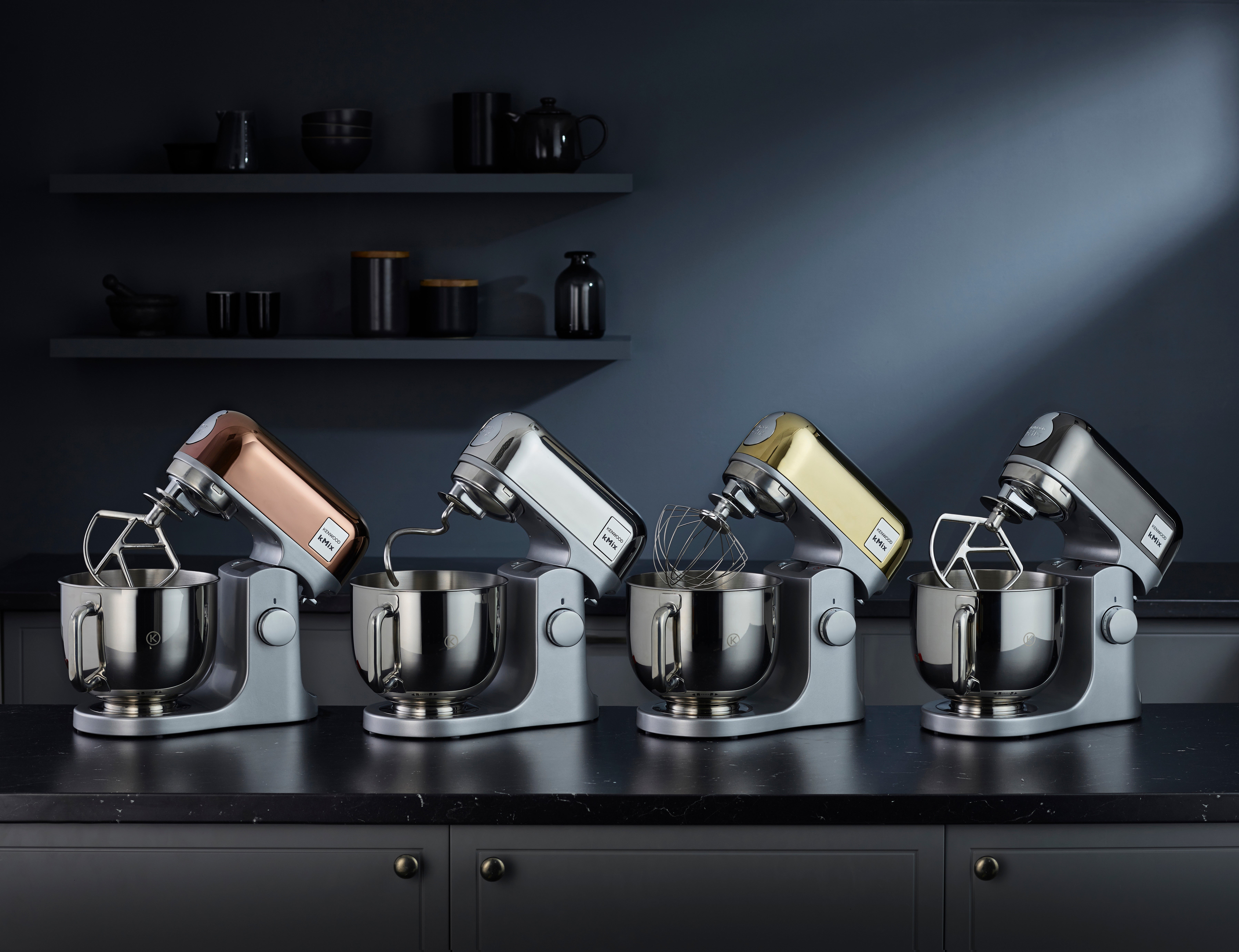 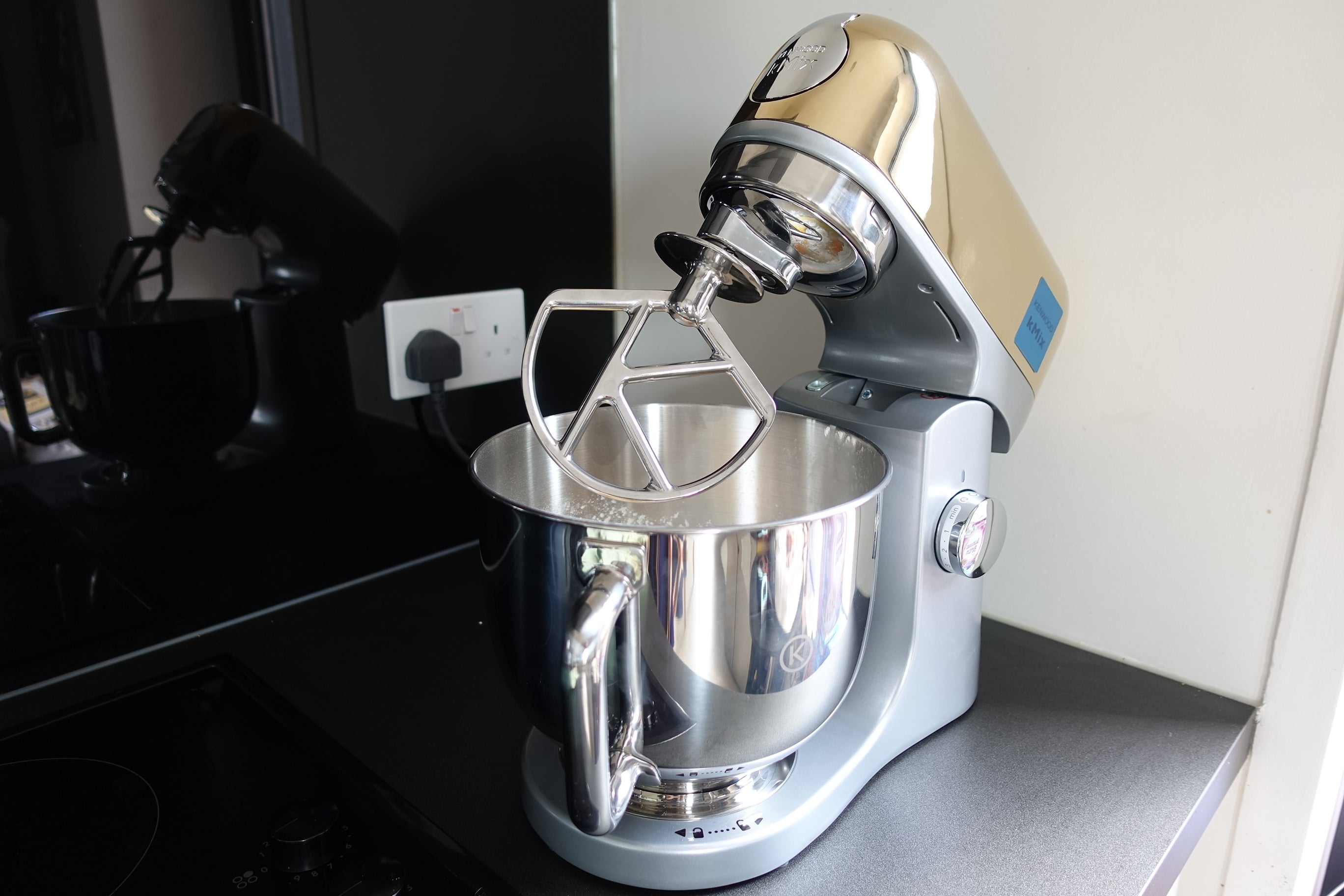 The gold version of the kMix stand mixer I tested isn’t for shrinking violets; it’s a statement. In its shininess, it’s reminiscent of Daft Punk’s famous helmets – only with more gold and with some stainless steel thrown in for good measure, too.

While the metallic lower half of the machine is matte, the gold top is super-shiny, attracting smudges – which isn’t entirely good form for an appliance that’s likely to encounter greasy hands. The same goes for the 5l stainless steel bowl, but the shininess here is pretty standard among all stand mixers.

Helpfully, this bowl has a handle, making it easy to pour the contents into a baking tin. 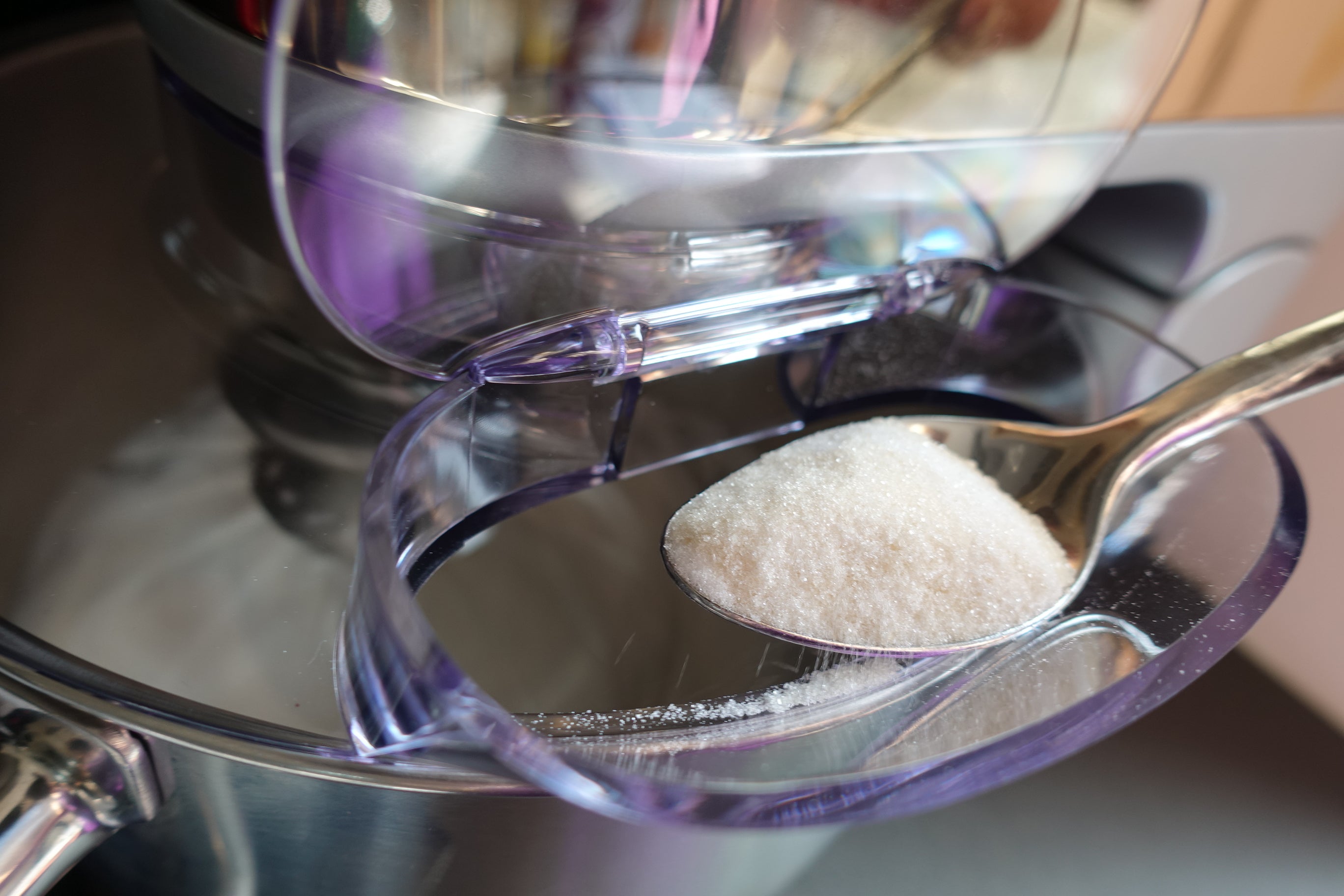 Kenwood kMix Chrome Collection Stand Mixer KMX760 – The splashguard confines potential mess to the mixing bowl, but you need to put it in place before attaching any tools

The transparent plastic splashguard is handy, too, particularly since its pouring chute has a little door that can be closed when mixing lighter and messier ingredients – flour or icing sugar, for example.

But putting the splashguard in place requires a knack and some commitment. Not only does it need to be pushed onto the mixer head quite forcefully, but you also can’t add or remove it once you’ve placed the whisk or the beater in its socket since they’re both too wide for the opening in the splashguard.

This may not be a problem if you don’t need to remove the splashguard during mixing. But if you want to have a better look at what’s going on in the bowl – or, in my case, take photos – it may prove annoying to have to remove the tool that may be covered in batter.

Some mixers, such as KitchenAid Artisan 4.8L Stand Mixer, come with a splashguard that can easily be removed during mixing, without even needing to stop the machine and raise the mixer head. However, the Artisan mixer’s splashguard’s pouring chute doesn’t close – and is less splashproof. 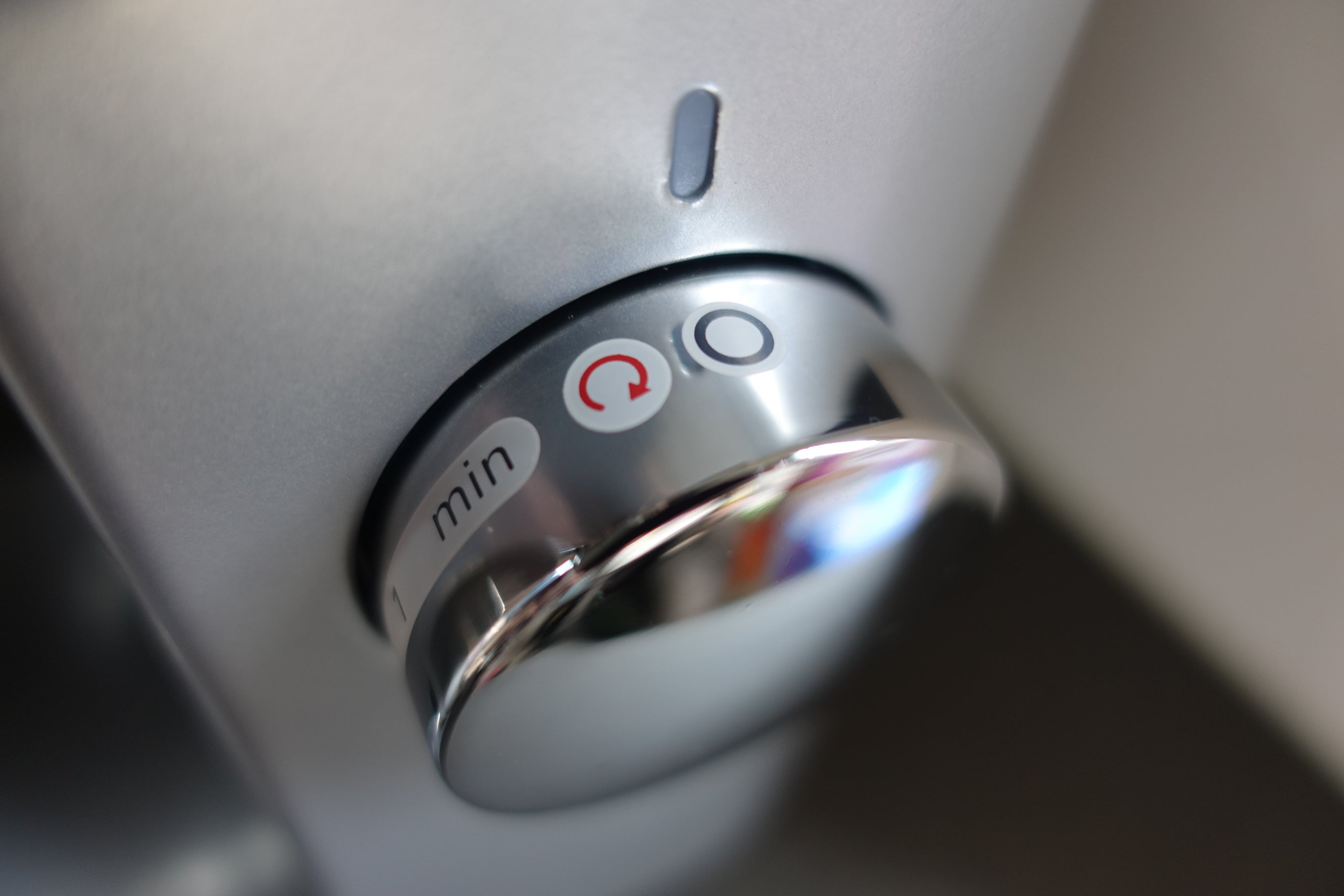 The lever for lifting the mixer head is located at the rear of the appliance, and the smooth speed control dial can be found on the side. There’s a small indicator above the dial that lights up when the mixer is ready to use (once it’s connected to power and the mixer head is down).

The dial features nine different speed settings: the fold function for the gentlest of stirrings and settings “min” and “max”, with speeds of 1 to 6 in-between.

“Min” and “max” are speed settings in their own right, with “max” handy for whipping egg whites and cream, and “min” suitable for starting off floury mixtures.

There are marks between each of the numbers, but stopping at those made no difference to mixing speed. 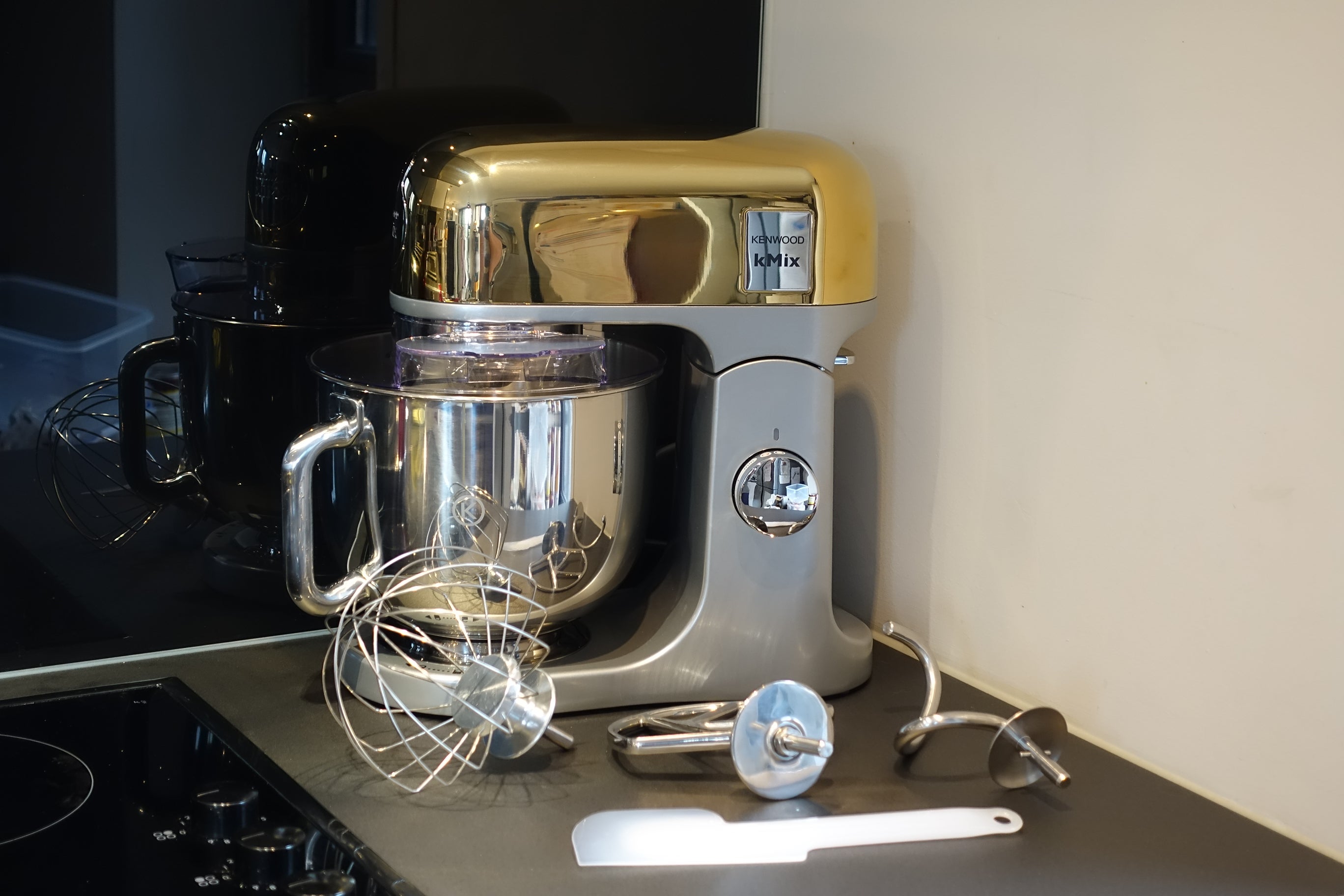 All three accessories – the beater (here called K-beater; a clever branded design choice), the whisk and the dough hook – are pleasantly hefty yet machine-washable along with the stainless steel bowl and the splashguard.

The beater is ideal for cake batter, as well as anything that requires folding or rubbing fat into flour. The whisk is perfect for egg whites and cream, while the dough hook is for kneading bread.

The manual recommends speed settings corresponding to particular attachments, along with approximate times and minimum and maximum quantities of ingredients. 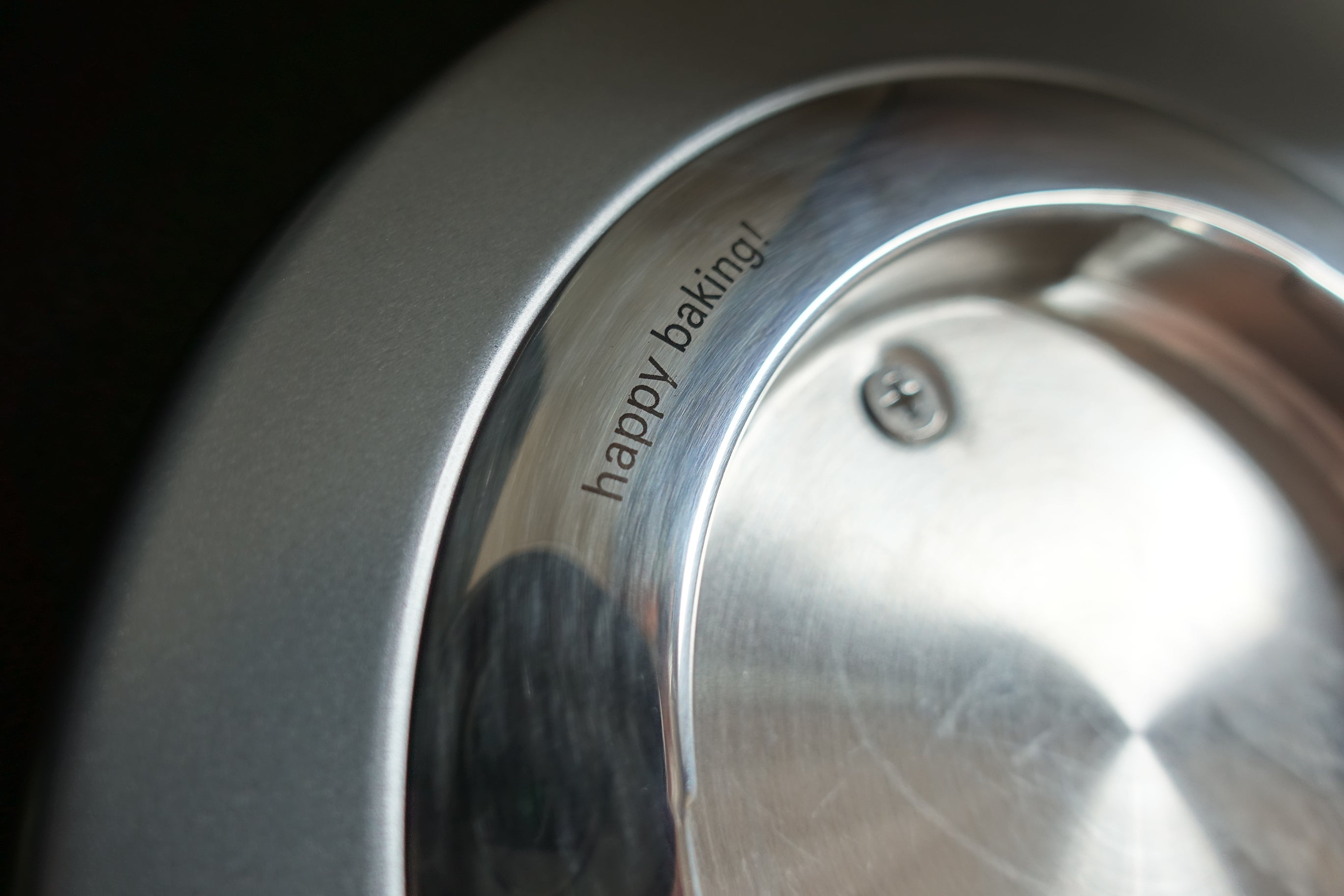 Whether you opt for this mixer depends on how much you’re willing to pay for it. Based on the pricing of previous kMix models, such as the KMX75 with its £419.99 RRP, the hefty full price here seems down to the shiny surface rather than anything else.

If you can find a deal – the KMX760 is available for £399 from some vendors – then this mixer’s performance and sturdy tools make it a great investment for your kitchen.