What is the KitchenAid Artisan 4.8L Stand Mixer?

With this year’s The Great British Bake Off in full swing, there’s no excuse needed to get baking. While last year the show caused a furore over replacing its traditional KitchenAid stand mixers with Kenwood kMix KMX5 mixers – a move that was quickly labelled as a cost-cutting measure on the BBC’s part – this year sees the return of the beloved KitchenAid Artisan.

While the KitchenAid Artisan mixer has found its way to many British bakers’ hearts, it still comes with a somewhat hefty price tag. So is it all it’s cracked up to be, or will it quiver under pressure? For a baking enthusiast, it definitely hits the spot. 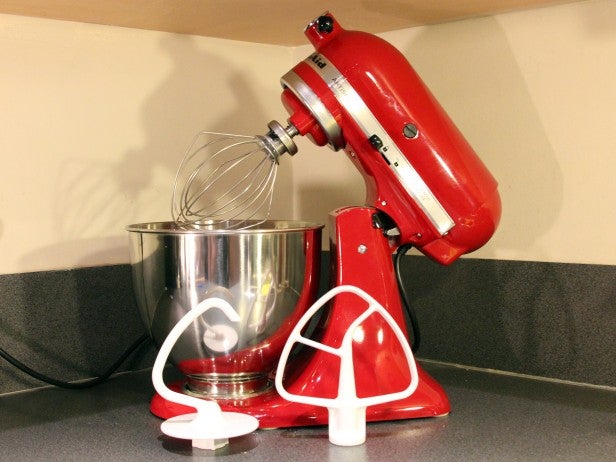 KitchenAid’s usual smooth curves and enamelled die-cast zinc make this a joy to look at. This 4.8L model (officially named the 5KSM150) also comes in a whopping 28 colours, from Frosted Pearl to Onyx Black, including on-trend pastel and several metallic options.

When it comes to the weight of the beast – 11.17kg, to be precise – the extensive range of colours starts to make sense: this mixer will have to be the centrepiece of your kitchen. It’ll be difficult to fit its bulky shape in any of your cupboards, even if you are inclined to attempt to lift it. You’ll need some counter space to keep it out, but if you’re a keen baker, this shouldn’t be a problem. 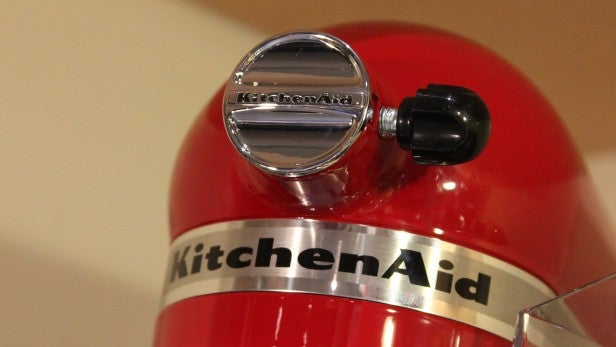 This version of the mixer comes with a stainless steel bowl rather than glass. While I’m fairly used to stainless steel bowls and don’t expect to see every movement my stand mixer makes, I can understand the appeal of the glass bowl on previous versions.

Nevertheless, the brushed insides of the stainless steel bowl are a perfect deterrent for sticky dough. Its lightness and comfortable handle – as well as the ability to keep its balance, with or without being attached to the mixer – have already made it my favourite kitchen bowl. The bowl can also take plenty of contents – up to 1kg of all-purpose flour or 800g of whole wheat flour. 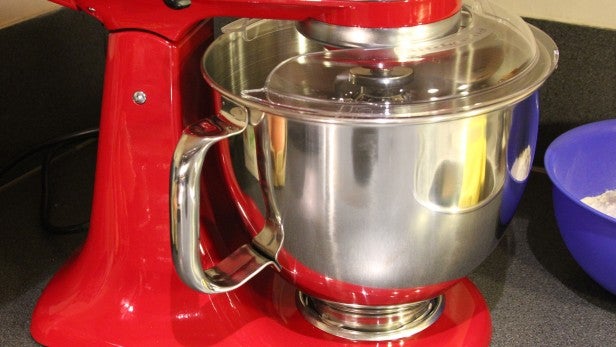 Compared with many of the cheaper multi-functional blender-chopper-mixers, the KitchenAid Artisan 4.8L mixer only comes with three attachments. But it’s quality over quantity, as the machine beats, whips and kneads with speed and efficiency, equally pleasing the time-poor and noise-sensitive.

The ceramic flat beater is meant for normal to heavy mixtures, such as cake batter and mashed potatoes. The wire whip works equally well for egg whites and whipping cream, while the ceramic dough hook is best for mixing and kneading yeasty doughs.

There’s also the option to purchase additional attachments, including food grinders and pasta makers, which can be attached to the attachment hub at the front of the machine. They’re not cheap, though.

While the mixer is advertised as having 10 speeds, only six of these are highlighted on the machine as well as in the instructions: 1 for stirring, 2 for slow mixing, 4 for mixing and beating, 6 for beating and creaming, 8 for fast beating and whipping, and 10 for fast whipping.

When adjusting the speed, the lever clicks into the gaps between the numbers marked on the mixer. Speeds 3, 5, 7 and 9 are said to be possible for a finer adjustment, but it’s more difficult to gauge the difference in speed level.

However, all the speeds have a soft-start feature, meaning the stand mixer automatically starts on a lower speed to help avoid turning you into a floury snowman. The mixer then seamlessly increases to the selected speed.

Having a pouring shield is a big advantage when comparing this model to its larger and smaller cousins. The KitchenAid Artisan 6L and the KitchenAid Mini we previously reviewed both suffered from the lack of a splashguard. 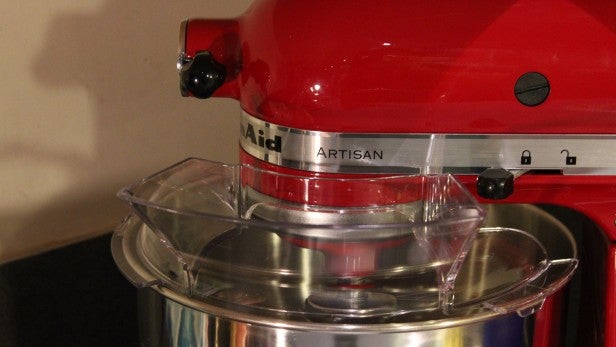 KitchenAid Artisan 4.8L Stand Mixer – What’s it like to use?

Putting the mixer together is simple. For beginners, the only thing to remember is that the mixer head is always in Lock mode by default, whether it’s up or down. To move the mixer head, the locking lever needs to be held in the Unlock position.

The bowl twists and locks into its designated position with ease. When attaching the accessories, there’s a slight knack to pushing the attachment into the beater shaft and twisting it to lock. Keep at it and it will come naturally.

Although the instructions come with mixing tips, including which attachment and speed level to use for particular tasks, there are no basic recipes. Still, KitchenAid boasts a PDF cookbook, downloadable from its website, as well as an app for iPhone and iPad users, with recommendations from starters to desserts, complete with illustrations of the suggested attachments and speed levels. 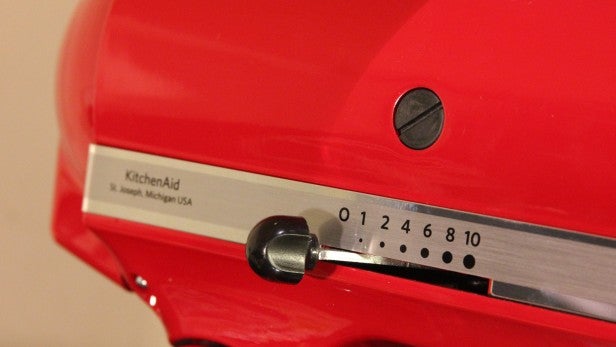 I started with croissants, using speed 1 to slightly mix the ingredients before going on speed 2 for the proper kneading. The mixer stayed stable with only a slight wobble.

The recipe itself is perhaps overly optimistic, not requiring to chill the croissant dough overnight. As for the results, Paul would say they were too close-textured and Mary would probably have called them “a little informal”, but they were definitely edible.

Next up was lemon and earl grey chiffon cake, which included copious amounts of beating and whipping. The mixer held its own during the whipping on speed 8, to the extent that a spoon balanced on top of it didn’t move. The egg whites came out stiff in no time and my chiffon cake was light and fluffy. 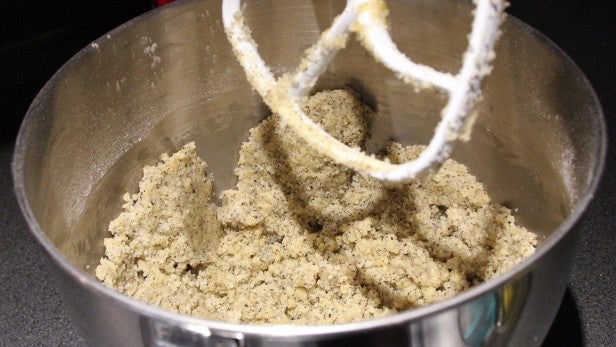 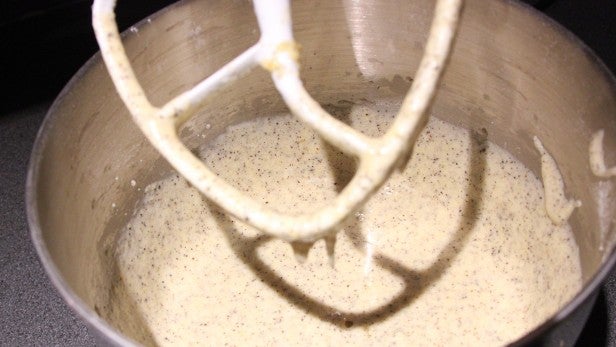 The final test was macarons, for which I made up my own recipe. This time I went rogue and threw in the sugar with liquid egg whites straight from the fridge. In 9 minutes at increasing speeds, I achieved a beautiful, stiff meringue I could easily hold upside down above my head.

At this stage it’s worth pointing out the mixer does all of that with minimal noise, which is especially handy, as my best baking usually happens at quarter past midnight. While venturing into the more dangerous (officially not recommended) territory of speed 4 with a dough hook results in more wobbliness, the general vibration and noise levels are fairly low compared with a lot of other mixers out there. 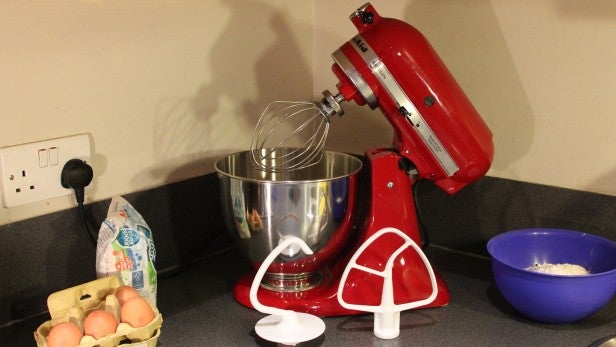 Should I buy the KitchenAid Artisan 4.8L Stand Mixer?

Despite the hefty price tag, many of the equally capable rivals in the market are similarly priced, meaning quality and stability are still expensive commodities. This classic machine may do fewer things compared with many of its cheaper all-in-one counterparts, but it does them very well. The splashguard and the sizeable bowl make this a good investment for a baking enthusiast at any level of experience.

Not too big, not too small, this mixer has Star Baker written all over it – if you can afford it.