JVC has built a solid reputation for itself at the budget end of the camcorder market over the last few years. While the Everio GZ-EX515BEK isn’t quite the cheapest model within the range, its sub-£300 price certainly puts it in the affordable bracket. Costing about the same as last year’s Everio GZ-EX215, the EX515BEK offers some notable improvements and is a higher-end camcorder overall. 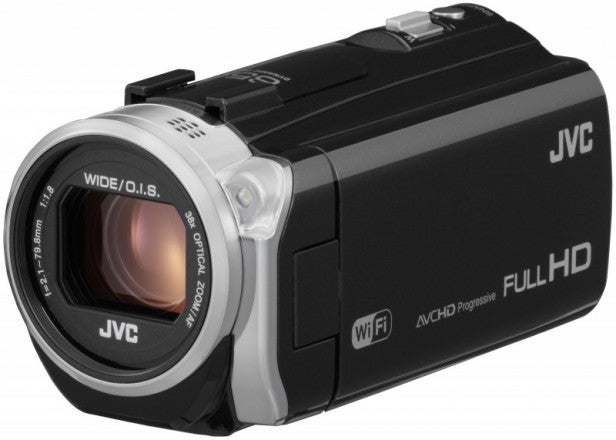 While the EX515BEK’s 1/5.8-inch CMOS sensor remains the same size as what was found inside the EX215, overall resolution has been boosted to 2.5MP – compared to the EX215’s 1.5MP. While the older model didn’t quite offer enough resolution for Full HD capture without a bit of interpolation, the EX515BEK has ample pixels to provide more detail and clarity. The EX515BEK’s CMOS sensor is also of the back-side illuminated variety too, which improves the camcorder’s capabilities in low-light situations.

The new sensor does have some downsides, however. For example, the optical zoom has been reduced to 38x while the Dynamic zoom has been shortened to 65x (compared to 40x and 70x respectively for the EX215). In practice though, this shouldn’t be hugely noticeable for all but the most demanding of users. Image stabilisation comes in the form of the JVC’s Advanced optical system, which is an improvement on the EX215’s Advanced (but non-optical) version.

Maximum video quality is 1920 x 1080p Full HD at 24Mbits/sec and 25fps, or 28Mbits/sec and 50fps – the latter option being a new feature of this year’s model. As before, it’s also possible to record standard definition video in MP4 format, with data rates of up to 9Mbits/sec. Also new to the EX515BEK are two iFrame options, with a choice of 720p HD and 960 x 540 available. Still images can be grabbed at up to 3840 x 2160 pixels. A single SD card slot is provided for storage, with no memory built in. A 64GB card will be enough for just over five hours of footage at the top 50p data rate.

The menu system has changed again for this year’s generation of HD Everio models. The quick menu from last year has been replaced by a more intuitive icon-driven interface that leads you through the many features and settings using the camcorder’s 3in touchscreen LCD.

JVC’s recent camcorders have foregrounded their whizzy animation abilities over more series enthusiast features, and the EX515BEK still has these options although they’re not given quite such a central stage, instead being located in a Special Recording section. There are facilities for grabbing stop-motion and time lapse frames with intervals from 1-80 seconds, as well as shooting at high speed (at lower resolution) for ultra slow-motion playback. The animation effects are still provided too, offering you the ability to place floating love hearts, particle streams or lens flares over your footage. You can even put hats, moustaches and glasses on your subjects should you want to, or stamp symbols and draw on the frame as you record.