The main reason for this – as ever with modern-era JVC home cinema projectors – is the X35’s awesome black level response. For even with that faint sporadic green tinge we noted earlier, there’s simply no disguising how sensationally deep the JVC X35’s black colours plunge.

Making this already outstanding achievement all the more adorable is the fact that the X35 can produce such black level depth without having to compromise the image’s overall brightness, meaning the inky blacks can sit right alongside punchy whites and bold colours.

Even better, being able to deliver such terrific black colours without having to adjust light output via a dynamic iris means dark scenes look supremely stable, with none of the distracting brightness ‘shifts’ you can see with rival projector technologies. 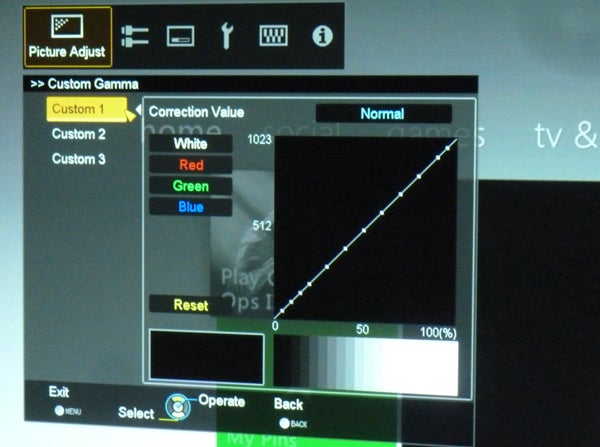 This freedom from a dynamic iris also means you don’t have to worry about the sort of mechanical noise that some dynamic iris machines – especially Epson’s recently tested TW6100 – produce. In fact, if you’re using the X35’s ‘low’ lamp setting, the projector scarcely produces any running noise at all.

Motion is decently if not emphatically well handled by the X35 too, with good sharpness and minimal judder, while colours using some of the presets – especially the Cinema one – combine some strong blend precision with a mostly natural feel.

Switching over to 3D sources, the first thing we noticed was that the X35 still doesn’t automatically switch to its 3D picture preset when it receives a 3D source. And nor does it automatically switch out of 3D mode when you go back to watching 2D. The X35 really should do both these things, to make sure that viewers get the best 3D and 2D experience without having to worry about changing picture presets manually.

Why should you use a different picture setting for 3D than 2D? Because donning the 3D glasses results in a reduction in image brightness and a slight colour shift, both of which are compensated for in 3D preset mode, but aren’t in one of the 2D modes.

Once you’re switched to the 3D preset, the X35’s 3D pictures are actually really good. In particular, we were hugely relieved to find the projector suffering far less with crosstalk ghosting noise than last year’s equivalent X30 model. In fact, there’s hardly a trace of it now, leaving even notoriously crosstalk-prone shots and sequences like Tangled’s lantern sequence looking clean, sharp and focussed.

This in turn makes it easier to appreciate the full HD detailing that’s active 3D’s trademark, and to soak up the terrific sense of depth created through a combination of the X35’s 3D clarity and its ability to render dark 3D areas and shots better than any other projector in its class.

The 3D images of the Sony HW50 are a tad crisper and brighter, perhaps, but provided you’re in a fully blacked out room the X35’s efforts are wonderfully cinematic and immersive.

The only problem with watching 3D on the X35, in fact, is that switching the lamp to Normal from our preferred Low setting – as the 3D preset does – causes a really significant jump in the projector’s running noise, turning it from practically inaudible to something you don’t really want to have to sit very near.

While the Sony HW50’s punchier, crisper images possibly make it a slightly better choice for people after a projector capable of functioning well in a relatively casual environment containing a bit of ambient light, when it comes to properly darkened cinema rooms black level remains king. And when it comes to black level, the X35 is still the one to beat.