Games purists may have sneered at Just Cause 3 – it was neither particularly original nor sophisticated, and shamelessly set out to entertain rather than provoke deep thought. Yet it proved to be something of a cult-classic: anyone who played it will testify that it provided an almost indecent amount of fun. The good news for the cognoscenti is that the fun is set to continue, thanks to a programme of downloadable content (DLC).

To be precise, that DLC plan will be known as the Air, Land and Sea Expansion, and will come in three chunks: the first, entitled Sky Fortress, due in early March, with the others following roughly every two months. According to a spokesman for developer Avalanche Studios, “The big goal was to expand the existing game, but also change the way you play it.”

We had a good play with Sky Fortress, the first item of DLC for Just Cause 3, and end up fairly satisfied. According to Avalanche, it should provide about two to three extra hours of story content, but perhaps its most appealing aspect is the way in which it truly adds something new to the gameplay – and you can replay the whole game with the new kit it provides, should you so wish.

That new kit is very much in keeping with Just Cause 3’s over-the-top nature. Essentially, it takes Rico’s wingsuit, and adds a rocket engine to it. Given that it also gives Rico the ability to fire rockets and a machine-gun in mid-air, it pretty much turns him into Iron Man. 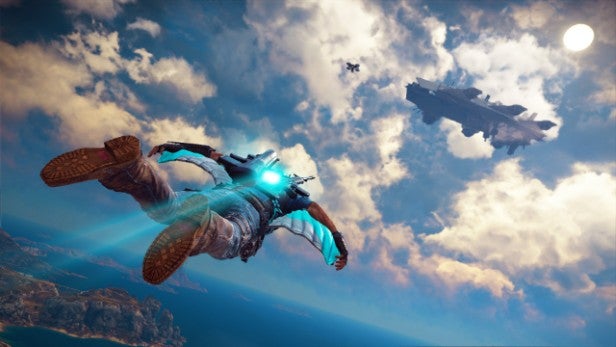 In practice, it still preserves the wingsuit’s gliding mechanic, but you get extra bursts of rocket power that, for example, allow you to fly straight upwards for a while, before a cooldown period kicks in. Flying upwards is necessary, because the eponymous Sky Fortress – a mysterious, hovering platform that is heavily armed and defended — has appeared over the skies of Medici. It turns out to have been made by the Eden Corporation. Naturally, Rico is sent to investigate it.

We took a while to get used to the mechanics of the rocket-powered wingsuit – from the ground, it launches you straight upwards, so you need a bit of space around you, otherwise you’ll hit something and crash. Also, the rocket engine fires only in the direction in which you’re flying, so in practice, it proves ideal for bombing runs, where you’re flying more or less straight at target areas, aiming at things to destroy in the process. The rockets that you fire auto-aim, but you have to keep them trained on a target in order for them to lock-on. 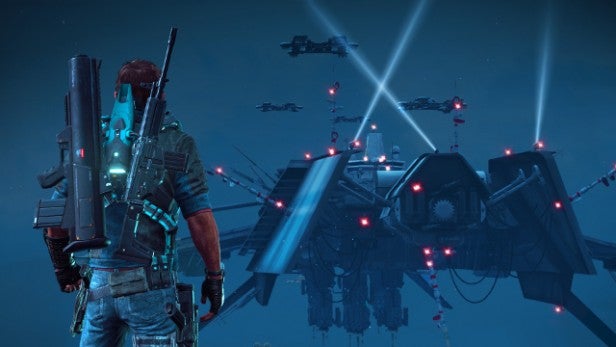 On reaching the Sky Fortress, typical Just Cause 3 rules applied: we had to blow up a vast array of designated targets. But taking out the drones first proved a wise policy: they are heavily armed and follow you around. We also discovered a new element of the DLC: a Bavarium-powered assault rifle called the Bavarium Splitter, which was pretty satisfying to use.

When we cleared half of the Sky Fortress (it’s split into fore and aft zones, and some of the elements you must destroy are on the underside, which is pretty tricky to access), our reward was a drone of our own, which followed us around, firing at enemies and drawing their fire. We discovered we could even grapple onto it and ride it, and Avalanche told us that once unlocked, it would then be available in Rebel Drops. 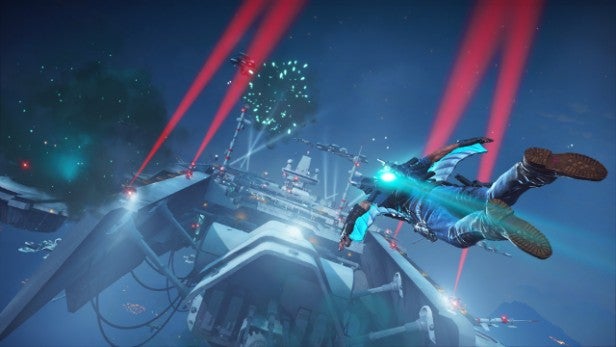 We managed to glean some detail about the two further DLC drops although we didn’t get a chance to play them.

The second one, Land Mech Assault, will feature a classic Just Cause-style toy in the form of a mech which breaks the usual mech-rules. That’s because it’s incredibly manoeuvrable, rather than lumbering, despite its crab-like appearance. It packs some amazing firepower (Avalanche said it will be able to take out tanks with ease) and an over-the-top Half-Life-style gravity gun, which is powerful enough to pluck helicopters out of the sky and chuck them at things. No details of any of Land Mech Assault’s story elements were forthcoming, though.

The final item of Just Cause 3 DLC, Bavarium Sea Heist, will unfortunately remain shrouded in mystery for a while: Avalanche would reveal no details beyond its name.

The Air, Land and Sea pack, featuring all three DLC, will cost £19.99, while Sky Fortress on its own will cost £9.49. A bit on the steep side, but we were certainly impressed with it: the pack thoroughly adheres to Just Cause 3’s ethos of being over-the-top and, above all, thoroughly satisfying to play — and Sky Fortress alone adds plenty of replay value to the base game, since you can start a new game and all its content will become available about an hour in.

If you can afford it, and enjoyed the original game, you will find the Air, Land and Sea Expansion to be the perfect excuse to step back into Rico Rodriguez’s shoes and revisit the joys of Medici.