Available on Xbox One, PS4, PC (reviewed)
In a year dominated by brilliant open-world games, Just Cause 3 still manages to make its mark in style. In a way, it’s the happy-go-lucky sibling of Metal Gear Solid 5, with both games following war-weary, bearded freedom fighters catching up with old friends, revisiting past glories and attempting to save the world just one last time. There’s no stealth, of course – Rico Rodriguez only has one volume setting, which is LOUD – and Just Cause 3 has no pretensions to art or cultural significance. It just wants to p.a.r.t.y. and cause a few big bangs along the way.

This is GTA 5 without the clever script and social satire but with the destruction dial turned up to max. It’s the game Saints Row wishes it could be. It’s also the game that has more fun with physics than any game since Portal 2, and quite possibly the silliest, most overblown, most downright entertaining game of late 2015. It’s the Just Cause that you knew a Just Cause could one day be. 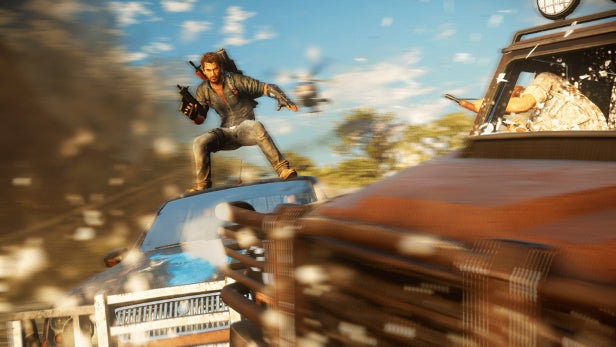 The setup is as predictable as the setup of a Bond film in the pre-Craig era. Ace agent, Rico Rodriguez, is back doing what he does best – deposing a brutal dictatorship in the noisiest way imaginable. This time, he’s doing it on his fictional Mediterranean island homeland, Medici, battling the vicious General di Ravello and his army of uniformed goons. Before long, he’s working with a childhood friend-turned revolutionary, a nutty scientist and his old handler, Tom Sheldon, causing chaos around the islands, taking over bases and wrecking installations. If you played the first two games, you know the drill.

But then Just Cause has never been about the story or even the structure. Nope, Avalanche Studio’s series is all about the carnage, the traversal and the toys. Rico’s trademark wrist-grapple returns, of course, along with the physics-defying parachute that deploys instantly to help him glide smoothly in and out of action. To this basic combo, Just Cause 3 adds tweaks, including a cool grapple and glide move that makes it easier to cover distances and an even better tether move, where you can attach one hook to one object, another to another, then squeeze the L2 trigger to pull the two together. 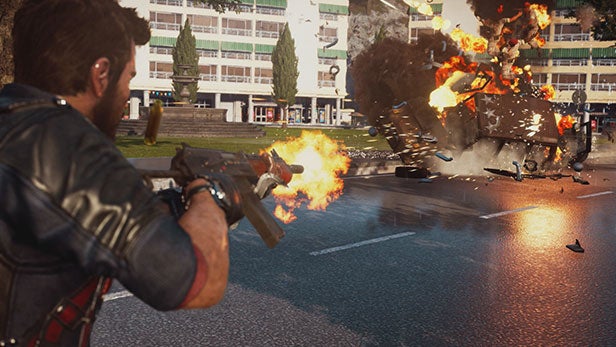 This might be the single best thing in Just Cause 3, giving you opportunities for explosive tank meets volatile barrel, soldier meets wall and guard tower meets ground high-jinx, everywhere you go. What looks like a power plant or a military airbase becomes a kind of domino toppling setup, only here the dominoes catch fire, blow apart and smash each other up in the most wonderful and unexpected ways. Trust me; cartoon rampant destruction has never been this satisfying or looked this good.

Beyond this, Just Cause 3 throws in a new mode of travel: the ever-lovable wing suit. Tap Y as Rico leaps from a precipice and compact wings spread out between his arms and torso, giving him just enough lift to glide at high speed over short distances. It’s less flying than falling with style, but when you combine it with the grapple and parachute new avenues of entry and exit open up, best seen with something blowing sky high in the background. 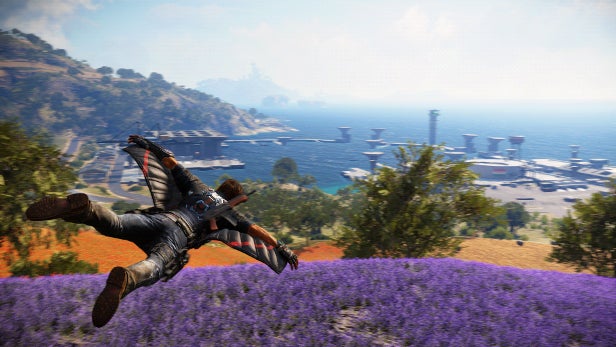 That’s hardly the end of Just Cause 3’s toyset, however. Firstly, a good portion of the scenery is immensely, lovably destructible, making it a joy to smash up and shatter. Then there are the vehicles – bikes, cars, jeeps, helicopters, boats, jet-skis, planes and tanks – all capable of adding to the carnage (and doubly so if you’re talking chopper gunships and tanks).

Put it all together, and Just Cause 3 is a total riot; the kind of game where you can drive a tractor downhill into an enemy base, spend five minutes smashing explosive tanks and chunks of scenery together, then hijack the helicopter sent in to kill you, make your escape, then cheerfully drop it on your pursuers as you wingsuit to freedom. It’s hardly deep or subtle, but it makes you chuckle. In fact, playing Just Cause 3 has regularly had me chortling away with childish glee in a manner which, I’m told, is very, very annoying indeed. 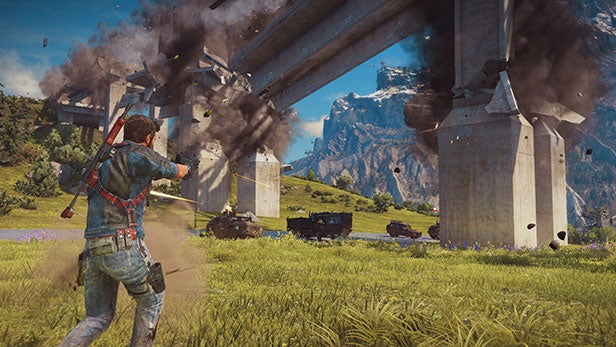 The big risk it takes is giving you so much of the good stuff so soon. While there are loads of weapons and vehicles to collect, not to mention mods that make your gear even more versatile and effective, you have a pretty full toybox to begin with. And once you’ve bagged a vehicle once and bought it back to a friendly garage you can have it delivered at any point later via a handy supply drop, along with your favourite guns. There is a cooldown period and it means you never have to wade into a firefight empty handed, but on the other hand, you never have to work too hard to get yourself set up for battle.

What’s more, while the storyline dishes out a series of main missions to keep you travelling around the islands and blowing up all the sights, you’ll inevitably spend a lot of time clearing bases and liberating towns – the later a slightly tedious task where a shopping list of objectives need activation or destruction. In short, Just Cause 3 could easily fall foul of the problem that afflicted Avalanches Studio’s other 2015 game, Mad Max; too much repetition, too little real staying power. 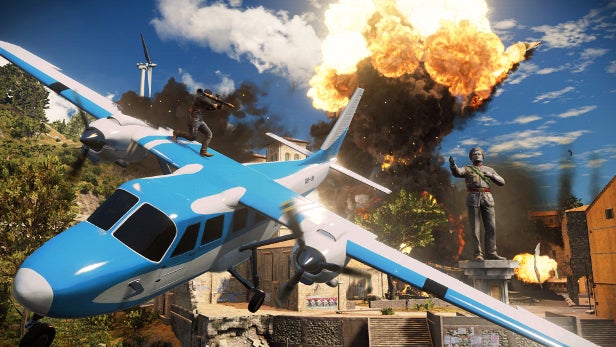 It’s close at times, particularly once you’re half a dozen or so hours in, but Just Cause 3 just about avoids it. That’s partly because, back on its home territory, Avalanche has grown more confident in its mission design and scripting, ensuring that each mission throws in new and interesting ways to wreck things and ensure that Di Ravello’s goons come to a nasty end. If you want to chill out, you can take part in various racing, aerobatic and wingsuit challenges, or simply go for leaderboard placings for a wide range of furthest/longest/fastest/biggest records. There’s plenty to keep you occupied.

It’s also because Medici itself is a more beautiful and varied setting than Mad Max’s endless wastelands. With its blue crystal waters, whitewashed towns and fields of lavender it’s just the kind of place you’d like to go on holiday, though you’d probably want to wait until the fighting ceased and somebody cleared up all the blood and twisted metal. 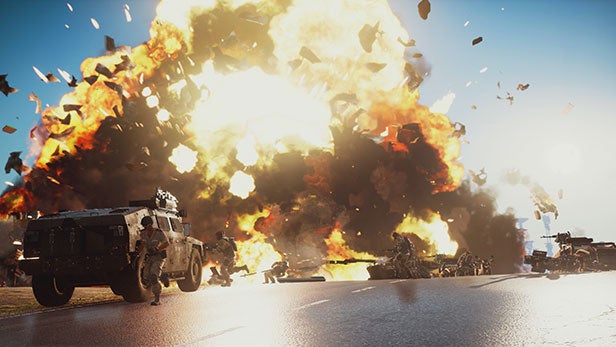 Just Cause 3 also seems surer about its own identity. Rico is a warmer, more engaging presence, the secondary characters are likable and funny, and the game has a fantastic sense of its own ridiculousness, with some brilliant lines that show Avalanche isn’t taking anything too seriously.

Most of all, though, Avalanche understands that things have to keep escalating. As you’ll learn early on, every action or Rico brings some reaction from the General, while the more bombastic and destructive your behaviour, the more heat Rico brings down. Just Cause 3 doesn’t have the shifts of tone or complex systems of a GTA 5 or MGS 5, but it knows that as long as it can throw more and bigger toys into the playpen, it can hold the players’ interest. Throw them in is what it does. 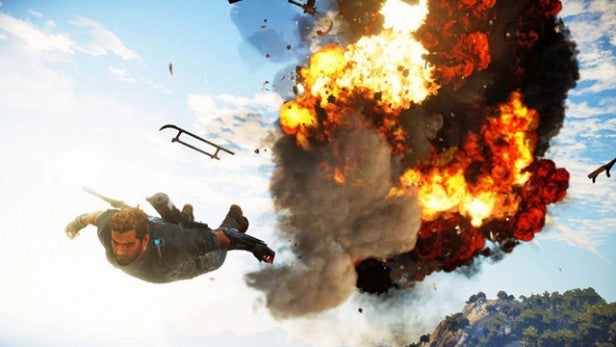 The result is a stupidly addictive junk food game, almost totally lacking in nutrition but horribly more-ish all the same. It’ll inspire a thousand reddit threads and Let’s Play videos, and they’ll be almost as much fun to watch as they were to play. You can’t sum up the game’s appeal more easily than that.

Still, just one word of caution before we go. We’ve been playing the game on a PC with a quad-core Xeon, Radeon 285 2GB setup; hardly a cutting-edge spec, but one that holds up pretty well at 1080p with high settings in most games. We needed to drop several detail settings to get Just Cause 3 running smoothly, and even then there were some bad fits and jerks from time-to-time. We’ll be very interested to see how smoothly the consoles handle the action, and it might be worth holding fire until the first reports come through.

Verdict
Meet The Phantom Pain’s disposable, delinquent cousin, dedicated to the art of blowing things up as loudly and as frequently as possible. Just Cause 3 doesn’t have the depth or richness of the year’s big open-world blockbusters, but it has a fantastic set of toys, some great destructible environments and a physics engine designed for maximum carnage. More importantly, it seems hell-bent on making sure you have a blast while everything goes bang. You’ll love it, feel slightly guilty about loving it, but keep on coming back for more.