You might assume the JBL Xtreme 3 is a crude bass-heavy party speaker from its look and name, but it’s surprisingly refined. It’s a great option if the idea of multi-room audio and digital assistant support leaves you cold.

The JBL Xtreme 3 is one of the best-sounding pure portable speakers. You can sling it around your shoulder and take it wherever you go, and it sounds good enough to use as your main hi-fi if you’re not too picky.

It isn’t a wholesale upgrade on the JBL Xtreme 2, though. The Xtreme 3 offers superior bass depth, which is great for electronic music and parties. But the JBL Xtreme 2 has slightly more balanced audio, which benefits things like snare drums and male vocals, for example.

Still, most buyers aren’t going to spend hours comparing these two speakers. The JBL Xtreme 3 is a higher class of party speaker that outperforms some smart speakers at a similar price.

At the time of review, you can actually buy the older version for £150, which is a steal. Why not snap one of those up? However, I haven’t downgraded the Xtreme 3’s score because some older stock is being shifted. It’s just a tip for the deal-hunters out there.

JBL Xtreme 3 design – Made for a life outdoors

I didn’t “get” the JBL Xtreme series when I first tried one of these speakers back in 2019. They have an obnoxious name, a look to match – but they sound far better than this initial impression suggests.

The JBL Xtreme 3 looks a lot like the Xtreme 2, but leans even further towards the style I turn my nose up at, by putting a huge embossed JBL logo on the front.

This unit isn’t going to sink into a stylish living room in the way most smart speakers are designed to. But the JBL Xtreme 3 isn’t a “smart” speaker as such. It’s a larger-than-average portable one.

A shoulder strap is included, which attaches via carabiner clips that lock into two tough metal rings on the top of the unit. 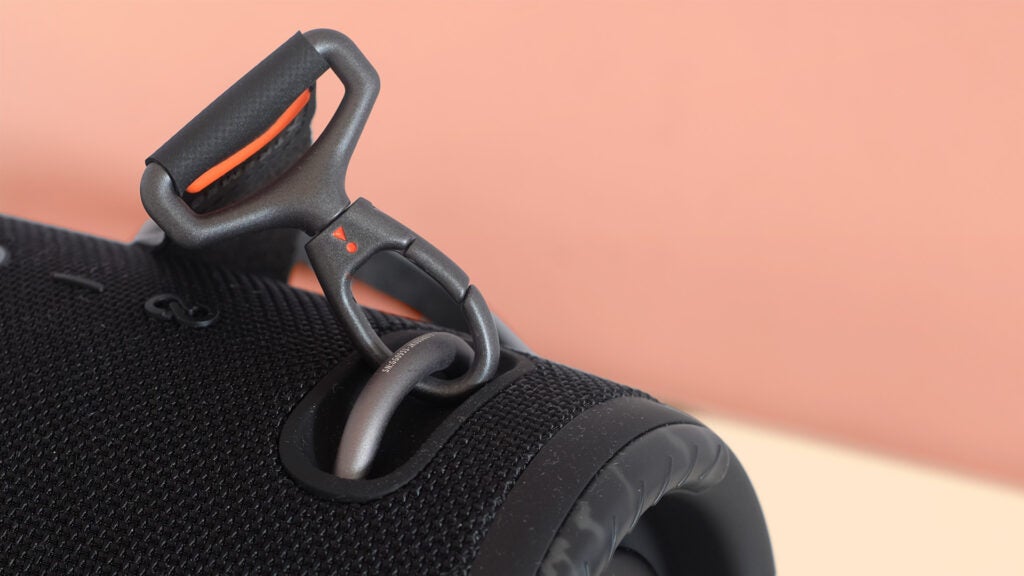 The JBL Xtreme 3’s outer parts are covered in a tough nylon webbing, and the speaker is water-resistant to IP67. Rain is no problem, and it can be submerged in water – although I didn’t have a swimming pool handy to see if it floats.

You can sit the JBL Xtreme 3 on its side, if you like, since there are rubber feet on each end. And unlike the last generation, this speaker sits on a set of rubbery strips at the centre of its bottom if you don’t — rather using than a couple of feet to each side.

It weighs 1.95kg according to my scales. This isn’t a speaker that will fit in your holiday hand luggage unless you’re going without clothes, but it’s easy enough to carry around. 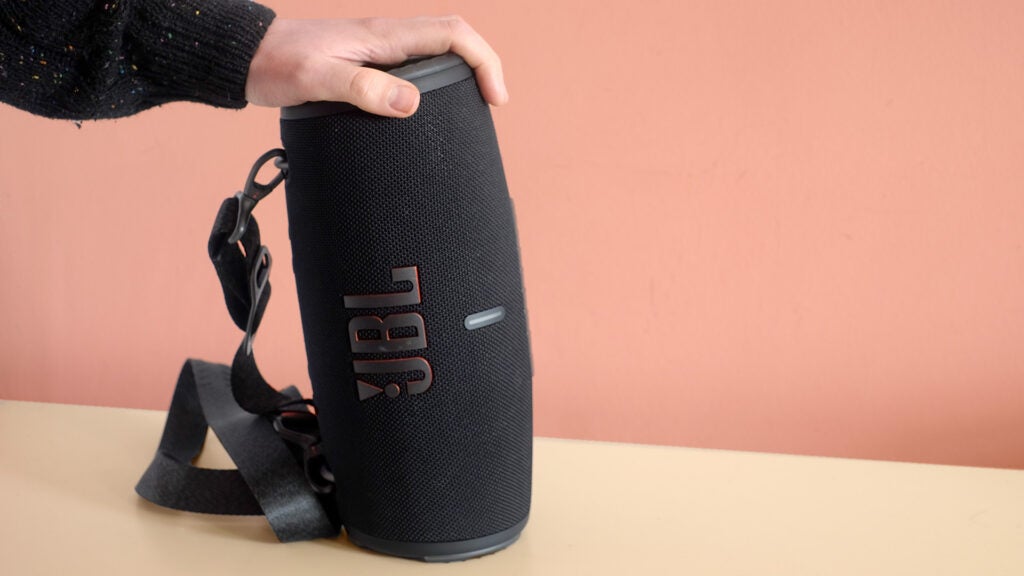 The JBL Xtreme 3 has fewer features than its predecessor. There’s no Google Assistant, Alexa or Siri support, no EQ and, like the last generation, no Wi-Fi. You do get a companion app, but there isn’t an awful lot in it.

PartyBoost is the one notable extra. This lets you link up two Xtreme 3s, either as a stereo pair or with both playing all channels.

The JBL Xtreme 3 is a simple Bluetooth speaker. And there’s nothing wrong with that. Not all of us want to live our lives via Siri or a multi-room app that makes you want to live a monastic tech-free life when it bugs out every few months. 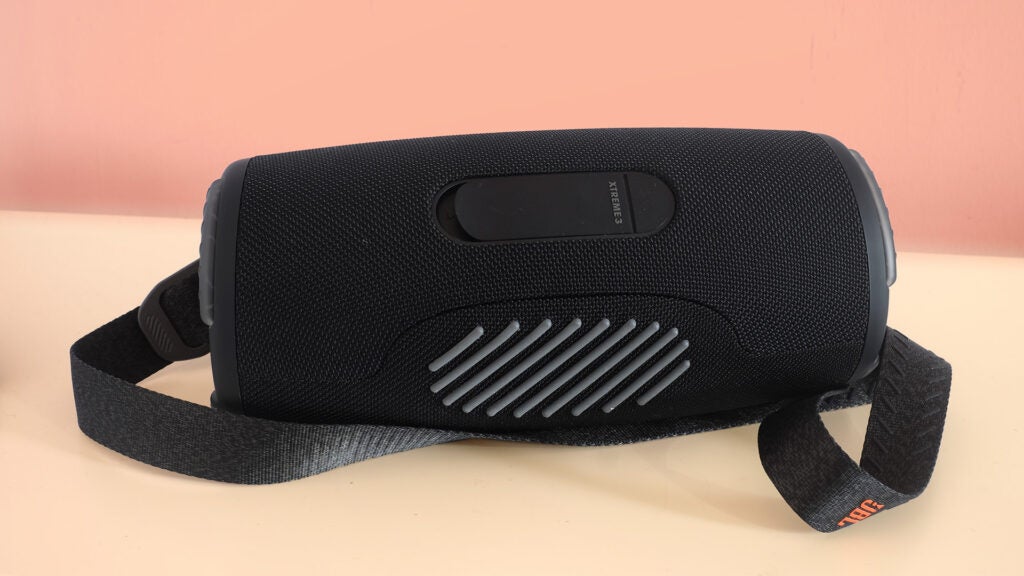 Extra design touches suit this style of use. The JBL Xtreme 3 has a bunch of clear, clicky buttons on its top; no gestures required. A little LED light strip on its front shows the volume level whenever it’s changed using these buttons.

A chunky rubber-sealed flap on the rear covers the USB, 3.5mm input and USB-C charging sockets. The full-sized USB is for recharging other devices (at up to 10W), not to let you use the Xtreme 3 as a laptop speaker. That’s possible, of course. Just plug in a 3.5mm cable instead.

The 36Wh battery lasts for up to 15 hours, similar to the Xtreme 2. And there’s plenty of juice for phone charging, if you don’t need all that time. The iPhone 12 has a roughly 11Wh battery, for example, which is a third of the Xtreme 3’s capacity. 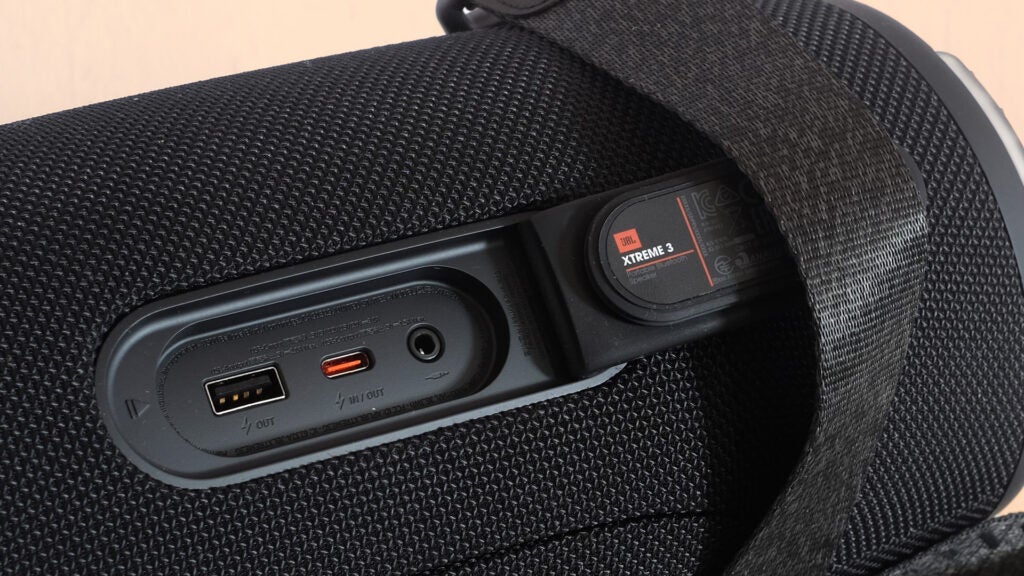 JBL didn’t throw out the driver array it used in the Xtreme 2. The Xtreme 3 still uses two 70mm woofers, two little 20mm tweeters and, of course, the speakers you’ll actually notice. A large passive radiator sits at each end, providing most of the bass.

These drivers let small speakers produce a large sound, and slightly larger ones such as this do so without consuming too much power.

The JBL Xtreme 3 displays far more satisfying audio than the average wireless speaker. There’s careful bass handling, which makes this speaker sound more ‘high-end’ than the Amazon Echo Studio, for example. You wouldn’t guess that from how it looks, would you?

Bass is powerful but not boomy, and there’s solid separation throughout the sound. JBL says these speakers have ‘JBL Pro’ sound. And as someone who uses a pair of JBL’s great-and-cheap LSR305 studio monitors at home, this isn’t pure marketing nonsense. 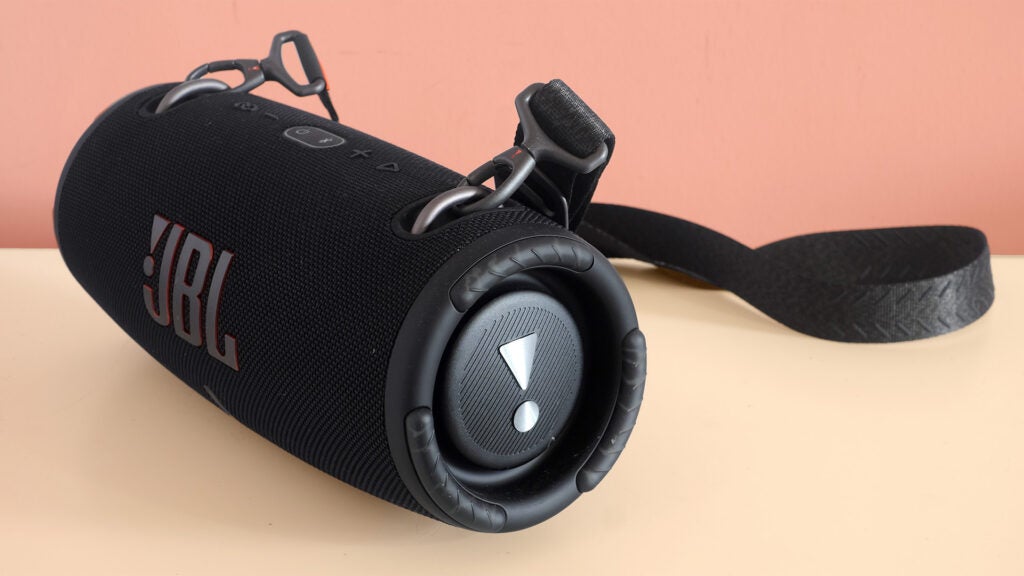 The main change in this generation is that the bass is now significantly deeper. Kick drums, particularly electronic ones, hit a bit harder in this generation, giving the Xtreme 3 more party cred without ruining the sound balance.

I fed a bunch of low-frequency tones through the Xtreme 2 and Xtreme 3, and there’s much more activity in the 45-50Hz region this time around.

With some content this can make the Xtreme 3 seem like it has greater dynamic range, producing a more ‘alive’ and full sound.

However, it isn’t an entirely positive change. JBL’s change in tuning seems to come with reduced upper bass and low mids. And while an excess of these is a common feature among Bluetooth speakers, the Xtreme 2 struck the balance almost perfectly. 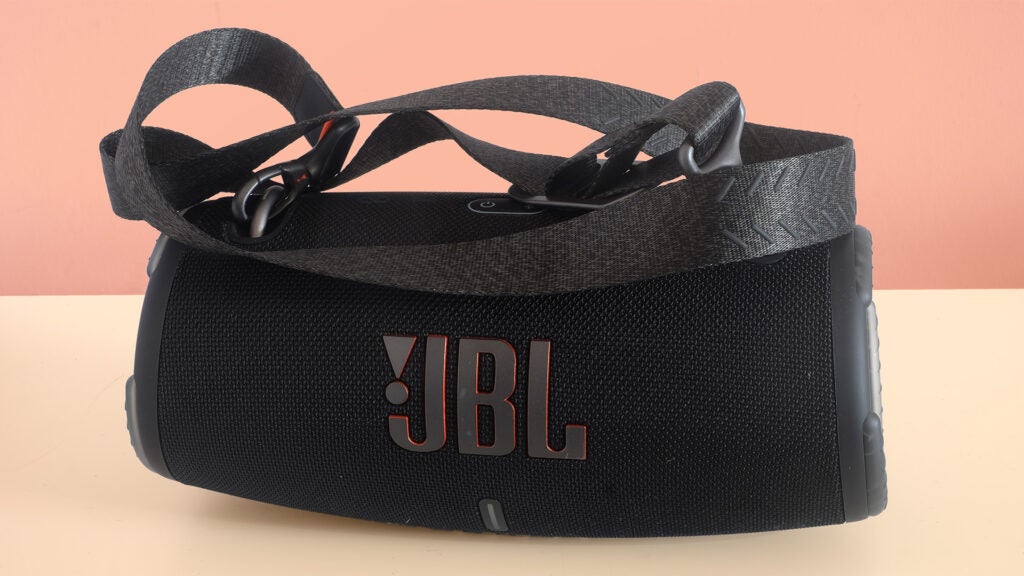 The Xtreme 3’s mids sound a little recessed as a result, giving lower-register vocals, share drums and other common inhabitants of the central channel a bit less of an up-front presentation than they deserve.

It’s also worth noting that while the Xtreme 3 presents significantly better low bass than the Xtreme 2, neither gets near the sub-bass performance of a non-portable large speaker such as the Sonos Play 5. This is no surprise. You can’t expect great ultra-low sub-bass response from a speaker that uses radiators to cover the higher-bass frequencies too.

The JBL Xtreme 2 and 3 are roughly equal successes in terms of audio quality, with the new model winning for impact and punch, the old one for mid-range presentation and consistency from low-bass to treble.

Both have a lot of volume on tap. Some have noted the Xtreme 3’s tonal balance alters a little at high volume, the bass radiators presumably tapping out at a certain point. That’s a reason to buy the larger JBL Boombox 2 instead. But this only affects volumes that might earn you complaints from neighbours –with good reason.

You should buy the JBL Xtreme 3 if…

You should not buy the JBL Xtreme 3 if…