The large Bluetooth speaker to buy if you're looking for a portable unit offering high fidelity, powerful sound

What is the JBL Xtreme 2?

The JBL Xtreme 2 is a wireless boombox speaker. It’s loud and portable, rather than aiming for the kind of tech seen in smart speakers. Wi-Fi and proper support for a digital assistant are missing, though.

Nevertheless, it sounds great, with a far more refined and balanced sound than the original JBL Xtreme.

This is a portable speaker for audio hounds, even though its look may not suggest as much. Don’t buy a JBL Xtreme 2 expecting the kind of ferocious or cartoonish bass response its name and design suggest, however. 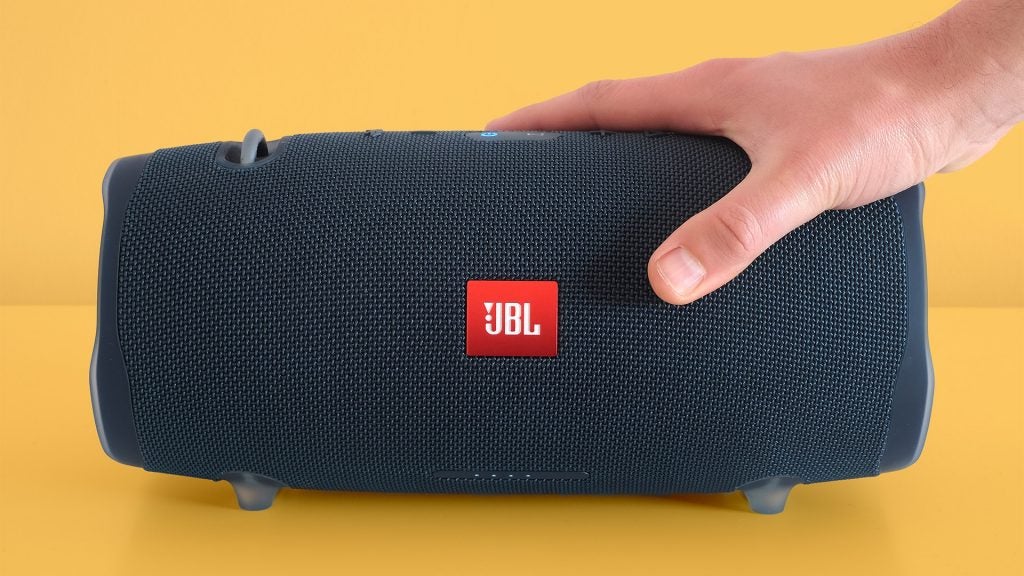 The JBL Xtreme 2 is a large, battery-powered Bluetooth speaker. It isn’t meant to sit in one spot in your living room, you can’t send music to it directly using Spotify Connect, nor can you request songs via voice command as you might with an Amazon Echo.

Nevertheless, I possess a soft spot for this kind of speaker. It’s an oversized version of the compact Bluetooth speakers some of you may own right now. You can take it room to room, or out on adventures, whether to the garden or the beach.

The JBL Xtreme 2 is too big to consider taking on a plane. But day trips? No problem. 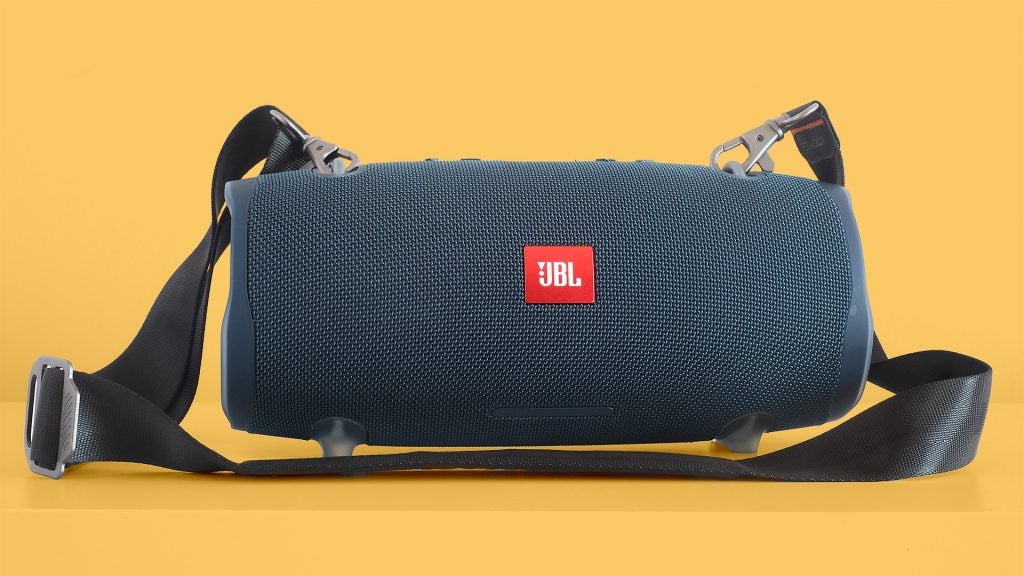 The unit comes with a strap, which attaches to each end of the Xtreme 2 via two carabiners. There’s some shoulder padding at the centre of the strap, and carrying the speaker around is pretty comfortable. This strap is key to cementing the Xtreme’s identity as a boombox-style unit.

It’s rugged, too. The grille is a tough, most likely a nylon-based fabric, and a chunky rubber seal over the ports on the back grants the JBL Xtreme 2 IPX7 water-resistance. Accidentally dunk it in a swimming pool and it will be fine. IPX7 means that the unit has been tested for submersion in 1 metre of water for 30 minutes. 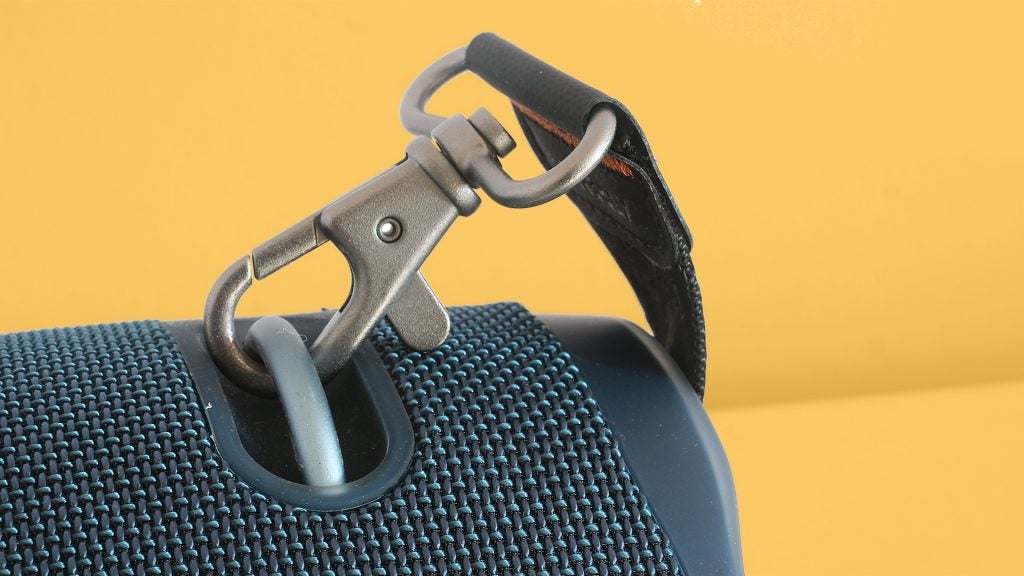 The question isn’t really how well the JBL Xtreme 2 will fare outdoors; it will be fine. It’s whether the speaker will look right in your home. It looks less grown-up than most smart speakers – the Harman Kardon GO + Play 2, for example, which is the large Bluetooth speaker I tend to recommend in this class.

Large passive radiators at each end, those metal carabiner hooks and the high-contrast JBL logo don’t conform to the idea of sophistication. Much as I have a big soft spot for the JBL Xtreme 2, I wouldn’t want it front and centre in my lounge. 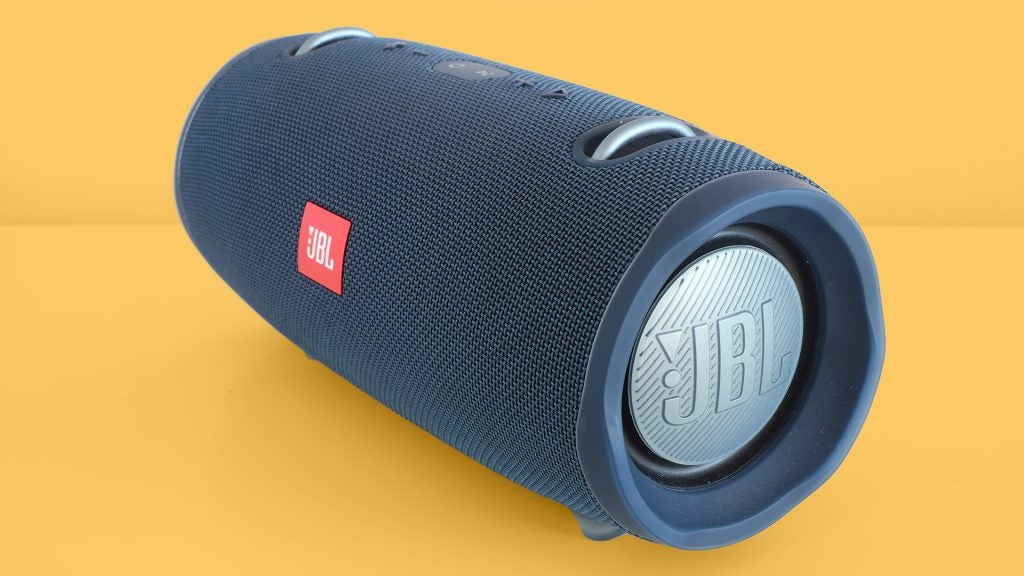 Tech-wise, the JBL Xtreme 2 is fairly simple, but has exactly the right features for a speaker in this class. Battery life of up to 15 hours is excellent for such a large unit, thanks to a fairly generous 10,000mAh cell.

You can also use it to charge your phone. A full-size USB port sits on the rear of the unit, beneath the rubber flap, and an LED indicator behind the grille on the front lets you know how much charge is left.

The JBL Xtreme 2’s other extras seem destined to go unused by many. You can set one of the buttons on its top to access your phone’s digital assistant. And using JBL Connect+, you can sync up multiple JBL speakers to play the same audio feed. You’ll likely have to convince friends to buy one: are you really going to let two of these loose in your home? 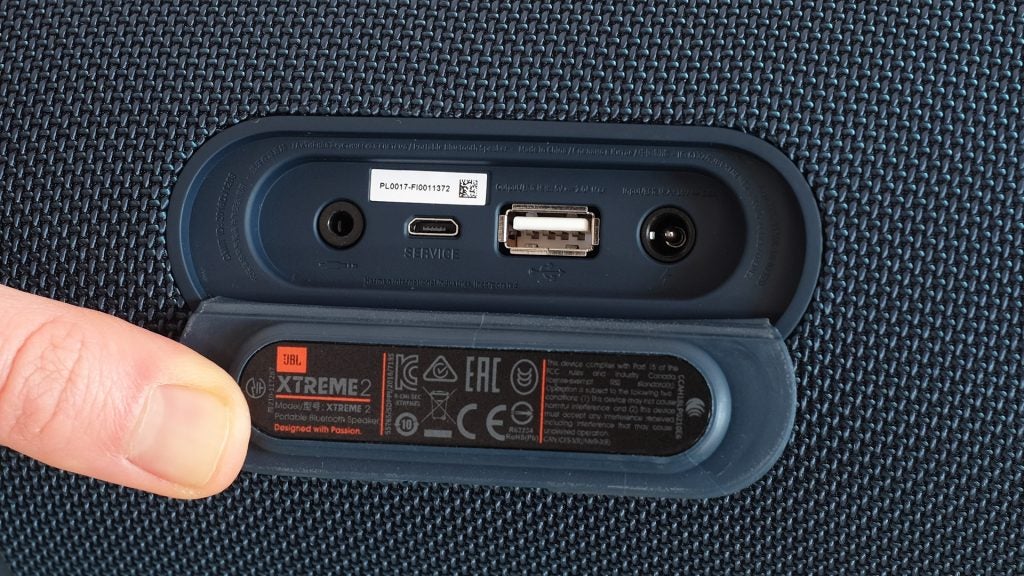 Other than these extras, the JBL Xtreme 2 covers the usual basics. You can alter volume and play/pause music using the clicky buttons built into the top of the speaker. A mic lets you answer any phone calls that come in while your handset is connected.

These also let you talk to your digital assistant via the Xtreme 2 – but bear in mind this is functionality on a par with a headphone in-line remote, not a smart speaker. You have to press a button to access your phone’s assistant. 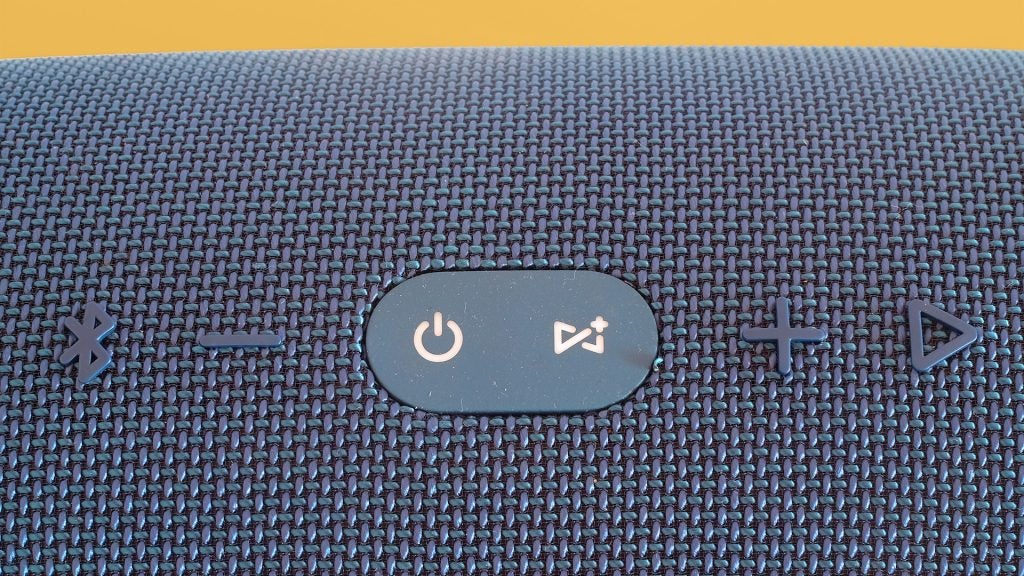 Imagining the JBL Xtreme 2 playing loud tunes to young party-goers is easy. But the sound doesn’t match this picture.

The JBL Xtreme 2 sounds better than it should, with far greater bass refinement and balance than I expected. It’s the best JBL wireless speaker I’ve heard to date, with a sound character closer to the JBL LSR305 studio monitors I use at home than the original Xtreme. The predecessor had bass to match the style, with more attention paid to moving air than how coherent it sounds.

In this second attempt, the bass is seamlessly integrated. It’s powerful and deep, lending kick drums and double bass lines realistic weight. But the “pumped up” and skewed low-end I had considered a near-certainty before hearing the JBL Xtreme 2 just isn’t there. 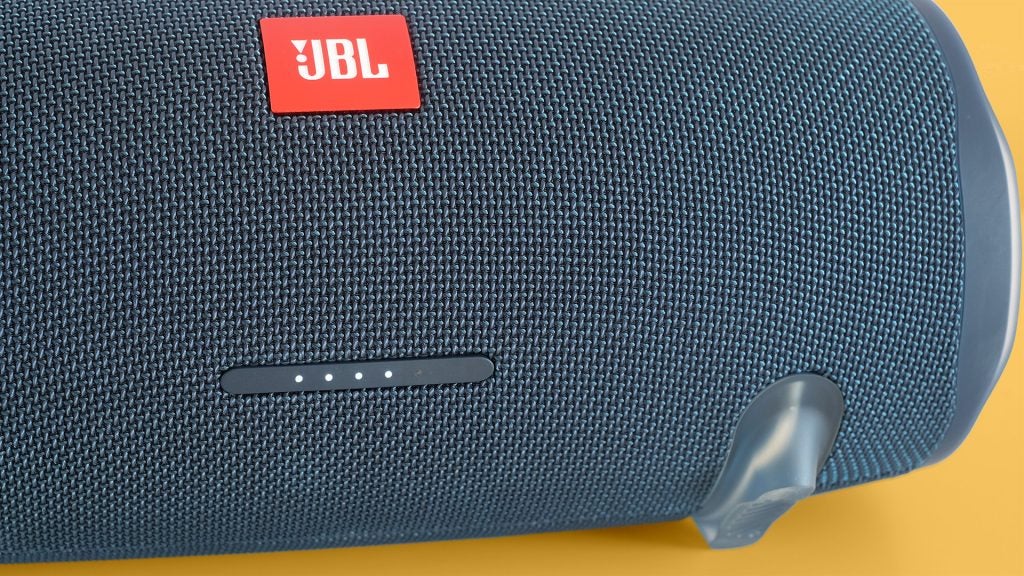 Here’s the crux of whether you should consider this a 5-star speaker or a 3-star one. The JBL Xtreme 2 has decent bass, but it isn’t “Xtreme” bass.

The rest of the sound is on a par with the best you’ll hear at the price. Treble is sweet, detailed and fairly smooth. The mids are well textured; not the scooped vacuum I anticipated, having prejudged the JBL Xtreme 2 before even opening its box.

Its combo of two 2.75-inch woofers, two 20mm drivers and those passive radiators provides both great sound dispersal across a room and a very involving, big-scale stereo image. This is a great-sounding wireless speaker. Just make sure you buy one with the right expectations.

As an appreciator of JBL’s sound choices here, I have just one other criticism. The JBL Xtreme 2 could probably do with an “outdoors” sound mode, since its refined approach to tone won’t necessarily travel as well in wide-open spaces. 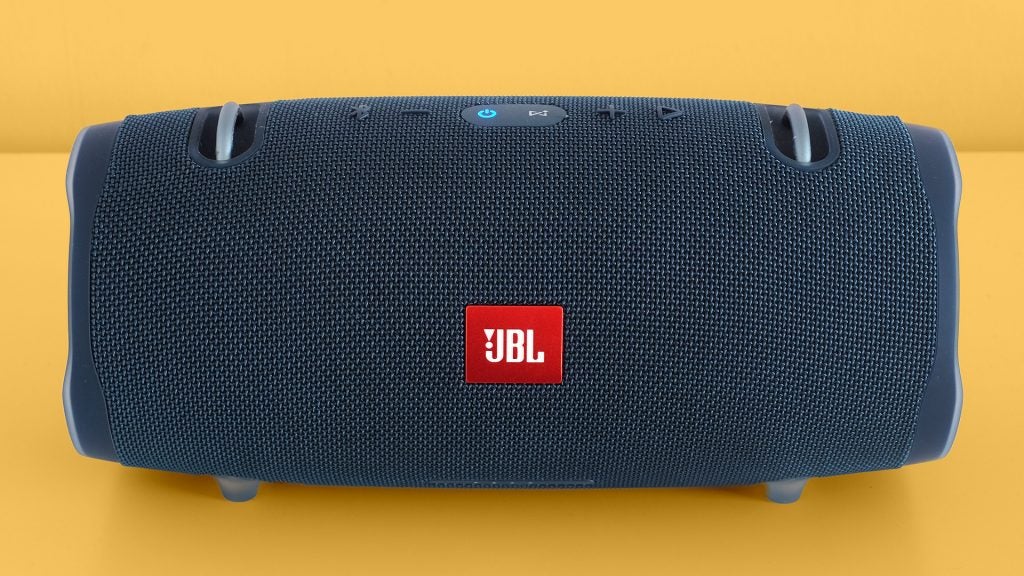 Why buy the JBL Xtreme 2?

The JBL Xtreme 2 is a fantastic Bluetooth speaker for portable use. It sounds far more refined than it looks, with the kind of tonal fidelity normally associated with a hi-fi-style wireless unit.

Will that mean those expecting extreme bass will be disappointed? Potentially. The JBL Xtreme 2’s low-end is deep and powerful, but the team behind its tuning clearly had higher aims than club-style bass.

It’s a more portable match for the Harman Kardon Go + Play 2, which had already slid off many shelves.

The large, portable Bluetooth speaker to buy if you want high-fidelity, powerful sound.