What is the Jam Symphony?

The Jam Symphony is a wireless multiroom speaker that’s out to court the kind of buyer who wants a Sonos speaker but is put off by the price.

Priced at £169, it’s around half the price I’d expect a multiroom speaker of this size to sell for, and a whopping £250 less than the comparable Sonos Play:5. The Jam Symphony doesn’t sound quite as good as the Sonos, and is clearly made to a much tighter budget. For pure value, however, it’s great. 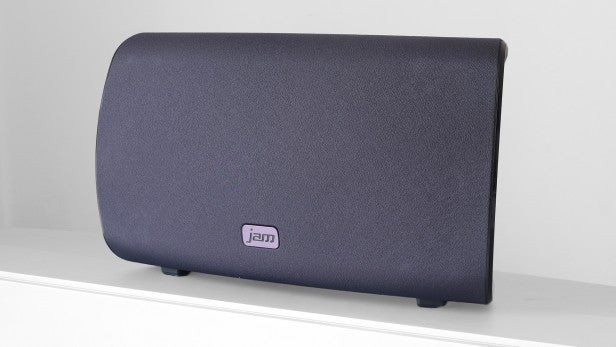 The Jam Symphony is a pretty large wireless speaker. It’s the sort of unit that you might use as your main hi-fi in your living room; and a cheap way to replace that ugly midi-system that looked so good back in the late 1990s.

If there’s one thing the Jam Symphony forgoes to pay for that relatively low price, it’s the build quality. This speaker doesn’t feel flimsy and it isn’t unattractive, but neither does it offer the glamour or solidity of most speakers of this size. 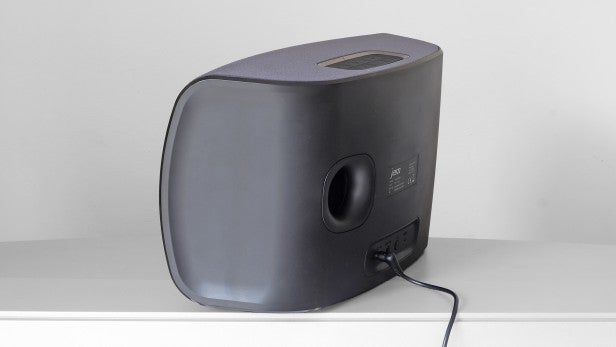 In fact, speakers of this size have been seen as “premium lifestyle” offerings right from their inception, and Jam Audio is doing its best to bring them back down to a more accessible level.

However, it’s only when you get up-close that you notice the Jam Symphony’s slight lack of polish. The shape, size and curves are all just right.

The Jam Symphony is largely plastic, with a basic fabric speaker grille that stretches over its front. Such speakers usually use tough glued-on nylon or aluminium for this front section, and the fabric used here is more likely to become mucky, or rip. However, unless you have kids with a track record of ruining every dome tweeter they see, this won’t be a huge issue.

There’s no doubt that the Jam Symphony is an at-home, non-portable speaker. It’s going to spend its life on a shelf or worktop, not trekking around with you on your hols in the way of the Jam Heavy Metal. 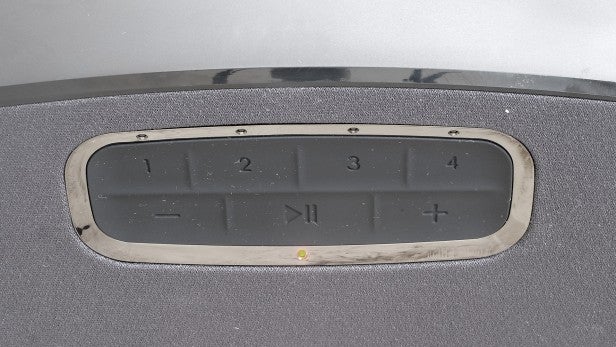 One way in which Jam has kept the price of the Symphony down is to finely hone what it’s about and what it does. This is a Wi-Fi speaker. It doesn’t have Bluetooth and there’s also no battery.

It isn’t completely devoid of feature, though. On the rear of the Jam Symphony there’s a 3.5mm aux input, and  buttons on the top allow you to control playback and volume, and select one of four presets. The presets are set in the companion app, and could take the form of playlists, albums or radio stations. 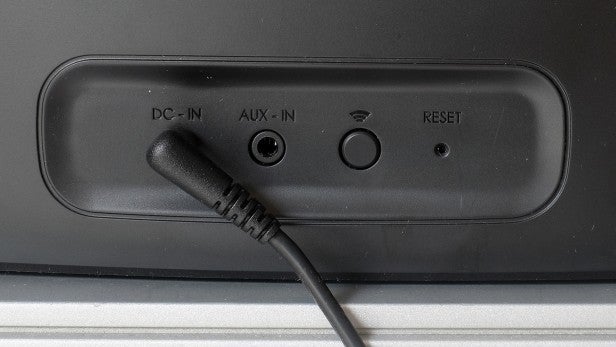 The app is where the important features live. Aside from the frivolous intercom feature, which lets you use the Symphony and your phone mic like a loudhailer, the app is mostly all-business.

Currently, you can use it to access Spotify and Tidal on the traditional streaming services front, as well as the TuneIn and iHeart Radio internet radio services, plus any locally stored music.

We had a few router-specific issues with our Netgear test router during setup. It was a minor nightmare, but it worked just about perfectly once we’d switched to an Asus router. Jam Audio told us it is working on the Netgear issue. A mid-test firmware update has hugely increased reliability, but there are still sync issues with our Netgear router. 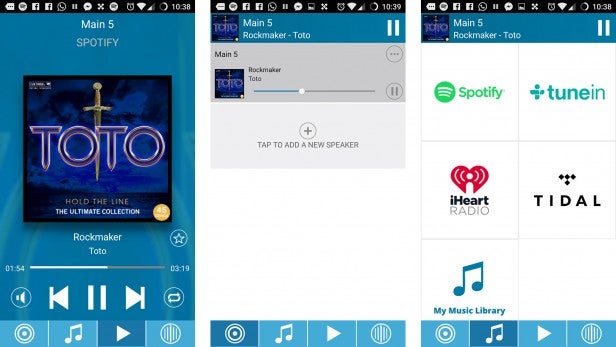 A few such niggles aren’t a surprise for a new wireless system, and while the software isn’t as polished as that of Sonos, it’s entirely fit for purpose. Some patience may be required during setup, though.

The multiroom side of the Jam Symphony is all about groups. You can pair up multiple Jam Audio speakers, and choose whether they play the left or right channels, or both.

The major victory of the Jam Symphony is that it gets you huge sound for the low price. It would be expected that a wireless speaker at this price might would be capable of producing sound to fill small rooms, but this box handles larger spaces with relative ease. The scale of its sound is more like a £300-500 speaker than one costing £170.

Bass reproduction is deep and powerful, outdoing almost all wireless speakers at the price with its subwoofer-like assured low frequencies. The scale of sound produced is just as much about what the size of the source appears to be as you listen to it. The Jam Symphony is the among the biggest-sounding sub-£200 multiroom speakers we’ve heard and makes the similarly priced Sonos Play:1 sound relatively small.

As such, the Jam Symphony would make a pretty decent alternative to a Sonos Play:5, if such a model is way out of your price range.

The Jam Symphony’s treble is good, too, offering clarity alongside that generous scale. 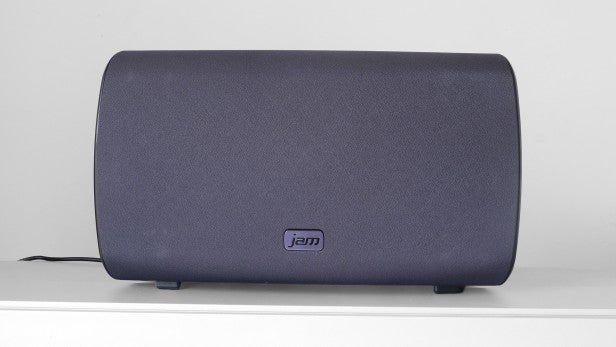 There are some issues, however – although at the price it would be a miracle if there weren’t.

At times, the speaker displays a slight lack of control over the bass. With certain content it can sound a little boomy, particularly when a vocal line has to compete with a meaty kick drum track. Jam Audio offers some very basic EQ settings in the app, but lowering the bass kills the Symphony’s power a little too much.

The Symphony is also a slightly “scooped” sounding speaker, where much of the sound’s presence comes from the bass and treble, with the mid-range almost sitting in the background. This makes the speaker’s wide, big soundstage appear flatter, and means central-channel vocals don’t stick out from the mix in the way they should. 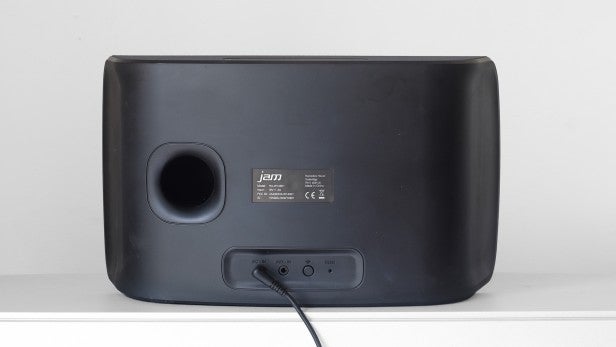 This sound signature is fairly common among wireless speakers, but it isn’t one adopted by the Sonos Play:1 and, curiously enough, the Symphony’s little brother, the Jam Rhythm. Jam’s smaller speaker has much more of a focus on the mids, but poorer treble clarity and a smaller sound in general.

It’s hard to complain too much at the price, though, especially when the sound is otherwise generous, smooth and clear. This is a great party speaker. Side-by-side with the Rhythm, I think most will prefer the Symphony’s fun tone – although personally I have a little more affection for the smaller speaker’s unusual tonal balance.

Should you buy the Jam Symphony?

If you want a huge-sounding speaker for a relatively small outlay of cash, then you’ll struggle to do better than the Jam Symphony. It’s a speaker that we wouldn’t have been surprised to see on sale for £350 a while ago. It wouldn’t have received as high a score at that price, however – at £170, it’s a great deal.

Don’t rule out the similarly priced and smaller Sonos Play:1, though. While the Symphony sounds a lot larger and has more powerful bass, it isn’t as full-bodied in the mid-range and the accompanying software is less impressive.

That the Symphony offers scale close to the Sonos Play:5 is worth appreciating, though. The Jam Symphony is yet another hit from Jam Audio, a company that’s fast  becoming one of the best names in low-cost wireless audio.

Huge sound at a low price from one of wireless audio’s rising stars.