What is the Jam Rhythm?

The Jam Rhythm is a wireless multiroom speaker at a bargain price. It costs just £99 – far less than the Sonos Play:1, which will set you back around £180.

If budget isn’t an issue then you might as well buy the Sonos. It’s better. But if you’re on a budget then the Jam Rhythm offers the best sound quality you can get in a genuine multiroom speaker for less than £100. 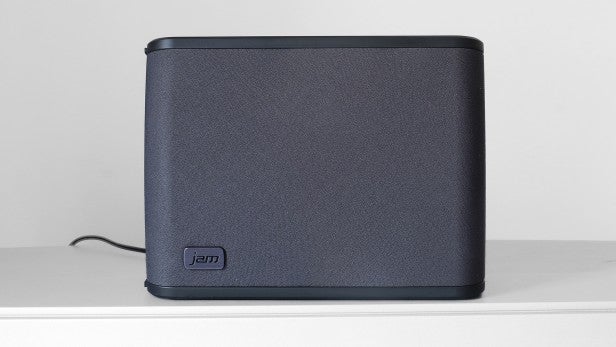 The Jam Rhythm is a dinky wireless speaker. There’s no shortage of rivals in this class; top alternatives include the Sonos and the less impressive Bose SoundTouch 10.

In direct comparison with the Play:1, the Jam Rhythm’s build is unlikely to make an impression. This speaker has been designed to deliver the best sound performance in the class, not to make you coo when you pick it up.

The body is plastic, the speaker grille is a basic fabric wrap that won’t repel moisture, and the series of rubbery buttons on the Jam Rhythm’s top appear pretty basic. Consistent pragmatism is what characterises the Jam Rhythm hardware: no part feels poorly made, but the build is prosaic. 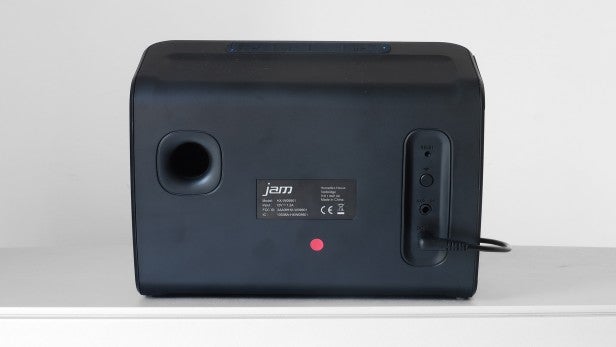 Does it matter? The Jam Rhythm isn’t a speaker designed to be the focal point of your lounge; it’s a speaker for which you might consider unseating a few Bill Bryson books on your bookshelf. It’s small and it will blend in. It isn’t beautiful, but nor is it ugly. 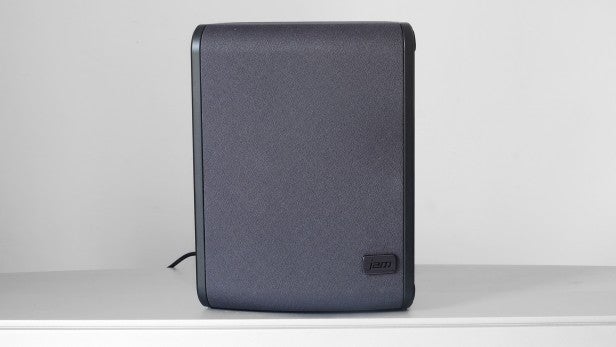 You can rest the Jam Rhythm on its side, or sit it upright – there are discreet rubbery feet on two sides to stop it from slipping. The logo on the front turns swivels to ensure it’s the correct way up to match the speaker’s placement. You can alter the sound output to suit: upright mode switches to mono, while the Rhythm plays a stereo feed on its side.

The Jam Rhythm is a full Wi-Fi speaker, capable of multiroom audio antics, Spotify Connect streaming and even a direct connection to Tidal. It doesn’t have Bluetooth, though, so you can’t stream the audio from your phone games to the speaker. There is an aux input, so it isn’t a closed system such as the Sonos Play:1.

A dedicated Jam app lets you access internet radio, the bespoke Tidal UI and your locally stored audio files – but Spotify access bypasses the app altogether, using Spotify Connect instead. If you haven’t used this before, it’s simply a matter of  selecting the speaker from the music playback screen on the Spotify app.

The Jam app isn’t anywhere near as polished as that of rival Sonos, and it doesn’t connect to as many streaming services. However, it works well for the most part: it’s quick, fairly intuitive, and the custom interfaces it provides for everything but Spotify are clean, if not exactly beautiful.

There are a couple of special features, too. You can turn the Jam Rhythm into an intercom, speaking into the app through your phone and out of the speaker. Party MC, perhaps? 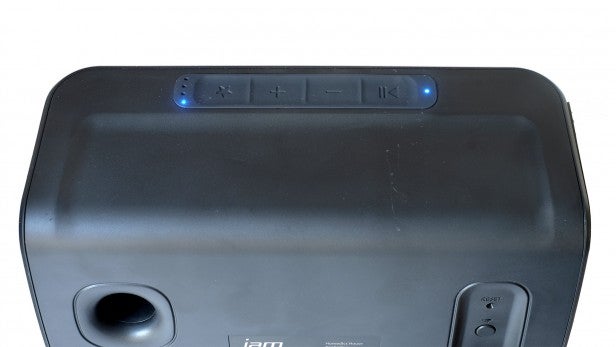 The “favourites” button is the star. The blue LED next to it shows the current favourite being used

More useful, you can also set four favourites. These are accessed using the “favourite” button on the top panel. They might be radio stations, Tidal albums or Tidal playlists. You can’t use them for Spotify albums or playlists, though, because Spotify isn’t fully integrated into the app.

If you want to use more than one speaker, simply drag one speaker’s entry onto the other in the app. It’s easy, and you can pair up two Rhythms in stereo. However, Jam Audio’s tackling of audio delay is fairly ham-fisted. 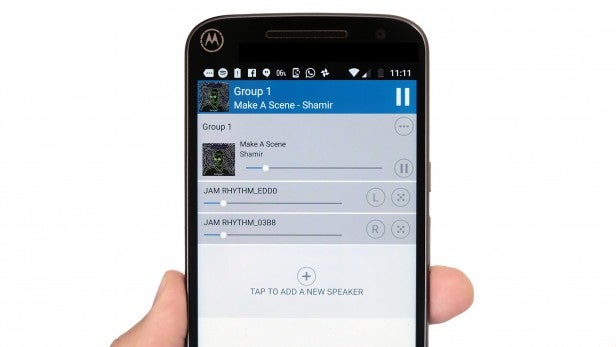 Getting wirelessly stereo-paired speakers to play together without perceptible delay is one of the main multiroom technical challenges. The Jam Rhythm does handle this, but you can actually hear it stumbling over the sync at the start of every streaming session. For the first second or so it’s as if the speakers are wildly out-of-sync before eventually lining up in what is the sound equivalent of the speaker tripping up on its laces.

I’ve also found that if you change a stereo pair to play both sides of the stereo feed mid-playback, the two can end up out of phase until you restart the stream, which tends to fix things. The Jam Rhythm gets there, but not in amazing style.

The Jam Rhythm’s wireless reliability wasn’t perfect during testing either, but seemingly only because it didn’t get on too well with our Netgear Nighthawk X4S router, which has caused problems with other smaller-brand wireless speakers in the past. This speaker’s standard setup procedure is simple and clearly explained – and if you have any issues, the speaker also supports WPS pairing. 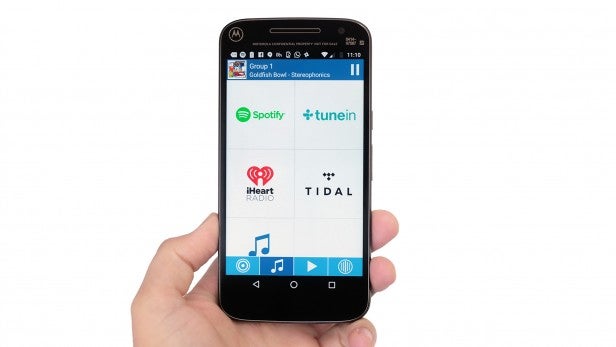 Small and cheap Spotify Connect speakers that we’ve reviewed over the past year or so have almost universally sounded quite poor. Here, we were pleasantly surprised.

The Jam Rhythm uses quite a traditional speaker setup. It has a large 3.5-inch driver tuned for bass and a pair of smaller drivers, rather than a series of dinky drivers and a couple of passive bass radiators.

The difference? In the Jam Rhythm all the drivers are powered by the amplifier, where a passive radiator piggy-backs off the air moved by other drivers. 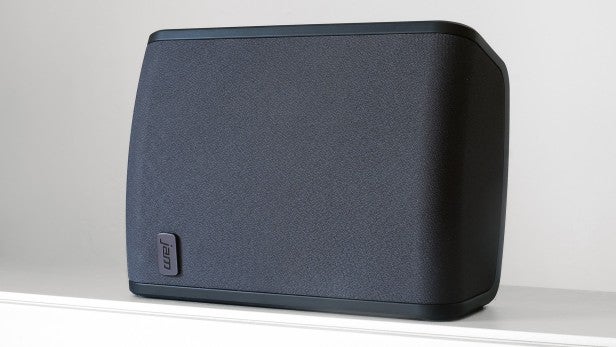 I imagine Jam tried out a few different speaker arrangements, because this one is a cracker, steamrolling the “affordable” Spotify Connect speakers I’ve been using over the past couple of years. The Jam Rhythm is a terrific little party speaker, able to output a truly surprising air punch of bass that doesn’t remotely trample over the rest of the sound.

The bass goes deep, too. If you’re able to crank up the volume every now and then, the Jam Rhythm is worth dancing around the house to. However, like most speakers using a traditional driver setup such as this, it does need to have some power behind it to really open up.

The Rhythm sounds fairly good at low volume, but it lacks some of the punch and dynamics it has at 60% volume and higher. Passive radiator wireless speakers are often slightly better optimised for low-volume play. 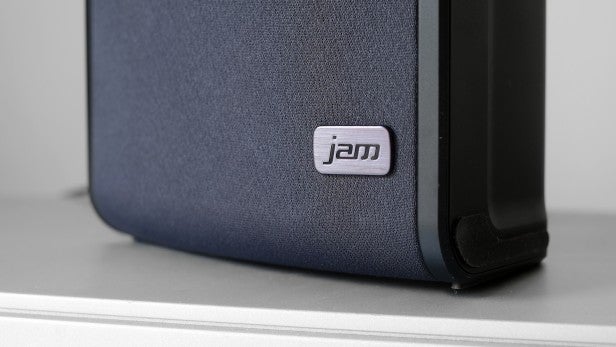 However, this is comfortably the best-sounding sub-£100 Wi-Fi multiroom speaker I’ve heard to date. Just like the Bluetooth Jam Heavy Metal, it can be put next to rivals costing almost twice the price without being shown up. It has unusually prominent mids, where wireless speakers tend to have scooped-out mids. In this sense, it’s quite like the Sonos Play:1.

There are some holes, though. The Jam Rhythm’s mids have a very slight synthetic edge to them, and the treble doesn’t have the spark you’d get from a speaker with a dedicated tweeter. Neither frequency band lacks detail, but the the mids in particular are much stronger in the Sonos Play:1. You can fiddle with the sound a little in the Jam app using bass/treble sliders, but I find the EQ best left at default settings.

To fill a room you might also want to consider getting hold of two Jam Rhythm speakers, since the sound sweet spot is a little narrower than some. 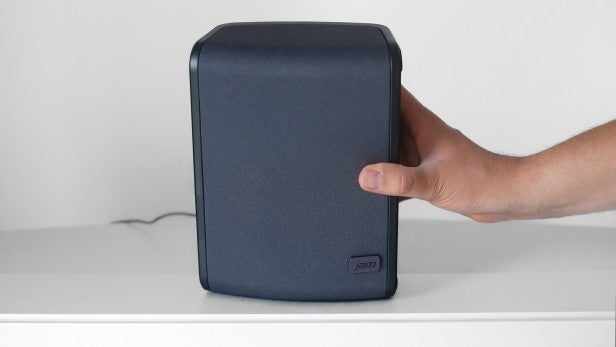 Should you buy the Jam Rhythm?

Jam Audio is fast becoming one of the most interesting lower-cost speaker companies on the market. The Jam Rhythm is a great speaker for those who just can’t justify the expense of a Sonos Play:1.

It cuts out all the superficial fancy elements while retaining plenty of useful features and support for streaming services. Crucially, sound quality is strong too. Bass is impressive with the volume raised and balance is solid, making this speaker very easy to recommend to those on a tight budget.

Only a synthetic edge to the mid-range betrays the perhaps humble quality of the hardware, but I’ve heard far more expensive speakers suffer from similar issues.

There are some quirks in the software, too. However, for a brand-new budget multiroom speaker family, the Rhythm works well.

If your budget isn’t quite Sonos-size then the Jam Rhythm is the speaker of choice.