What is the Jabra Tour?

The Jabra Tour is the answer to several problems. It’s a Bluetooth 3.0 hands-free speakerphone that clips onto your car’s sun visor. It lets you make and receive calls, can act as a speaker for clearer GPS instructions and supports most phone’s voice control systems. It also supports two simultaneous Bluetooth connections, so you can pair more than one phone. That’s a lot of boxes ticked for £85.

There’s nothing remarkable about the Jabra Tour’s design, but everything is as it needs to be. Volume controls flank each side of the bottom edge, there’s a call button at the top and a button on the silver ring in the middle activates your phone’s voice controls. It clips securely onto your sun visor, and there’s even a mic mute button on one side. It’s all very neat and tidy.

It’s incredibly easy to setup, too. Unlike many Bluetooth devices that rely on a variety of unintelligible flashing lights and noises to tell you things, the Jabra Tour has voice guidance. It confirms if you’re paired or not by announcing “Connected” or “Not Connected”; it tells you how much battery life in hours; it guides you through pairing with the device – it even tells you what code (0000) is if needed. It also announces the name of anyone calling, so you don’t have to have your phone in sight to decide if you want to take the call.

It takes all the stress and confusion out of using it, which is incredibly reassuring. You’re never left wondering whether it’s actually made a connection or not. 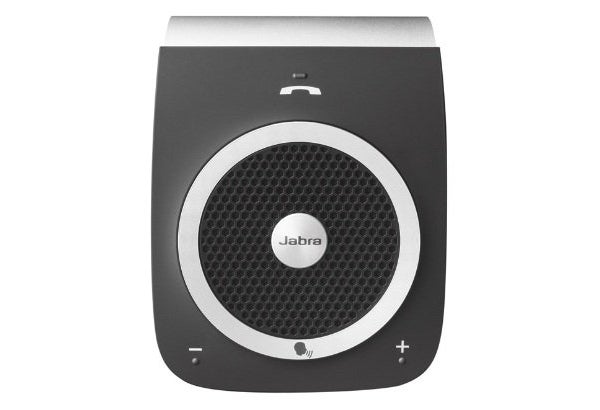 The Jabra Tour makes a great first impression and builds on its great design when you begin using it.

Making and taking calls is straightforward – you can make calls using your phone’s voice recognition, and you can accept and reject calls with voice commands so you never have to take your hands off the wheel.

Call quality is excellent. The built-in 3-watt speaker is loud, clear and precise. There are two microphones inside the Jabra Tour that, combined with digital processing, ensure very good call quality at both ends. We’ve been using the Jabra Tour for weeks without any complaints from recipients no matter how noisy the cabin.

Indeed, the only time the mics really struggle is when trying to use a phone’s voice system (Siri on an iPhone 4S in this case) when travelling on the motorway. Here the higher road noise made more complicated actions, such as sending messages, too unreliable. It was still accurate enough to make calls, however, and at lower speeds we managed to perform most functions (and send text messages) with little trouble.

The final impressive point is the battery life. Jabra quotes up to 20 hours of talk time and 40 days (yes days) of standby time. It’s enough that you won’t need to charge it often, in fact we’ve yet to do so since we started using it. Moreover, while there is a physical power switch, the Jabra Tour automatically powers down when not in use and has a motion detector so it powers up again when you’re moving.

All told, the only criticism we can think of is that you can’t control music playback using the Jabra Tour (it doesn’t support the AVRCP standard), but that’s hardly a feature it needs. You could play music on it, but that’s not what it’s for. It handles calls admirably and is also a great addition if you rely on your phone for sat nav instructions. 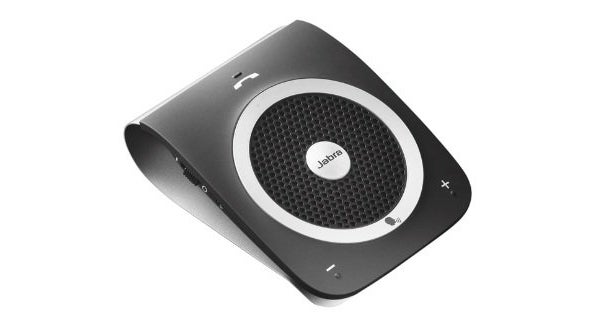 Should I buy the Jabra Tour?

There are quite a few similar products on the market and the Jabra Tour is one of the more expensive, but it’s worth every penny.

It performs faultlessly, but the real kicker is how easy it is to use. It just gets out of the way so you don’t ever have to think about you’re doing. Provided you have a phone that has its own voice recognition system, which includes most iPhones and Android smartphones, it’s a great addition to your in-car setup.

Next, read our round-up of the best iPhone 5S cases