Introduction
In the world of robot vacuums, ‘affordable’ is a relative term. Top of the line models can sell for in excess of £700 and none can yet fully see you retire your manual vacuum. Of course significant performance and battery life improvements in recent years mean they can be superb accessories, scheduled to do regular cleans that relegate your vacuum to a bit part role, but they remain luxury items at luxury prices. iRobot, however, is working on that.

The newly launched iRobot Roomba 600 series won’t achieve this in a single step, but what it does do is bring previously premium performance to a line of machines that start at under £300. The iRobot Roomba 620 is the entry level model in this range and we let it get its brushes dirty. 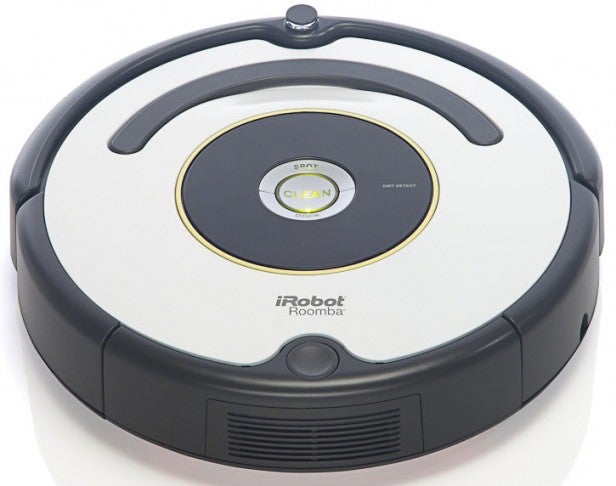 iRobot Roomba 620 Design
The first thing that becomes apparent when you take the iRobot Roomba 620 out the box is it has had a style makeover. The whole look is more rounded, with the machine’s circular design now complemented by cleaner lines which drop the straight angles that had outlined the bumpers, dirt bin and more. Instead, every join is curved and every knob or button accented by soft circular or semi circular boarders. Combined with a more colourful finish the overall effect is slightly cartoonish, but it is also more modern and we’d expect iRobot to carry on this design approach with other lines as they are replaced in time.

iRobot Roomba 620 Features
Where things become most interesting, however, is in the amount of technology now packed into this base model. At the core of the iRobot Roomba 620 features list is an updated version of iAdapt, iRobot’s proprietary system of software and sensors, which incrementally learns the layout of your rooms and makes multiple passes for a more comprehensive clean. 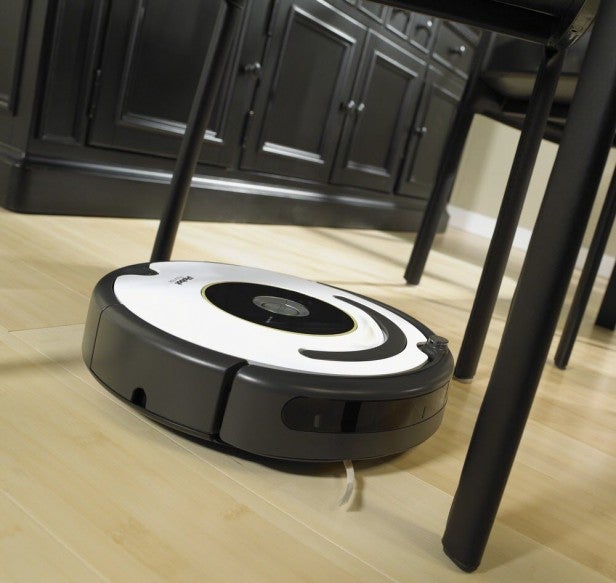 On top of this you’ll find ‘Dirt Detect’ which uses an acoustic sensor to locate dirtier areas and spend more time cleaning them. The same patented three stage cleaning system as found on flagship Roombas is also aboard making it equally happy cleaning carpets, tiles, laminate and hardwood flooring. In addition, the company has stated that all iRobot Roomba 600 series models will more effectively handle hair, pet fur, lint, carpet fuzz and other fibres than previous generation robots.

‘Aerovac’ is a further smart technology passed down from the iRobot Roomba 780 and coupled with a new brush (designed to minimise the amount of the hair caught in the brushes) it optimises airflow so the bin fills more evenly letting it be emptied less. Other core functionality carried over from past models included step detection and automatic docking when it has finished cleaning or the battery is low.

Where the compromises exist are the lack of onboard scheduling (available only on the 600 series flagship the iRobot Roomba 650) meaning you will have to start it manually each time while virtual wall ‘lighthouses’ (markers which stop the Roomba from crossing an invisible line) have to be bought separately.

iRobot Roomba 620 Performance
So how does all this come together? The answer is rather well, though there are limitations. What is immediately clear is that the iRobot Roomba 620 is a significant improvement of the ageing 500 series it supersedes. Initial mapping of a room can be slow and a little haphazard, but the iRobot Roomba 620 learns quickly and is eager to dig into every nook and cranny it can find before making long, sweeping passes on wide open areas of floor. iRobot doesn’t specifically mention battery life, but we also found this to be much better with the 620, lasting roughly 80 minutes on a single charge – almost as long as the 50 per cent increase championed in the 780 which saw it last 90 minutes.

As well as navigation and stamina, cleaning performance has also taken a leap putting it almost on par with its more pricey stable mates. Robot vacuums still won’t pick up as much dirt as a manual vacuum, but the iRobot Roomba 620 does a fine job of picking up debris roughly to the size of popcorn and is effective at collecting fluff and dust – the latter of which has historically been spread around as much as picked up on hard floors.

Where are the negatives? The most obvious point is one inherent to all Roombas: they remain ‘bump bots’. This somewhat derogatory term has come to categorise robot vacuums which regularly make contact with their environment as they work out a room. They also appear less logical with their multiple pass system which can appear fairly random to the naked eye. They are best left on their own since the end results are excellent, rather than watched. 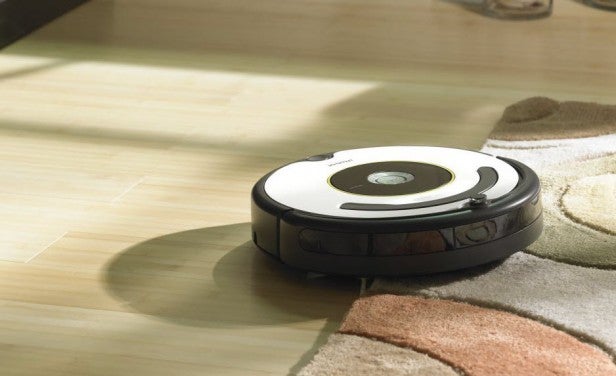 The upside is this bumping approach tends to be more impetuous with tenacity for digging into hard to reach areas; the downside is they slightly jog the environment around them – most notably if they get behind open doors whereupon they push them shut locking themselves in rooms. This requires a certain amount of ‘Roomba proofing’ before starting a clean. The flipside to this approach is the somewhat misleading ‘SLAM’ (Simultaneous Localization and Mapping) technology seen in Neato’s products, including the Neato XV-25 and Neato XV-11. They tend to trace the outline of a room before neatly vacuuming the middle and they barely touch anything. Against this they can skip over tight areas the Roombas belligerently attack. The choice is yours.

Other things to note are the lack of convenience of the absent on-board scheduler so you won’t be able to schedule it to run when you’re out the house (meaning you also have to put up with the fairly loud noise or start it before leaving), the lack of a full bin indicator (a daft omission) and the fact a large circular indicator flashes amber when charging – something which grows irritating if positioned in your regular line of sight. 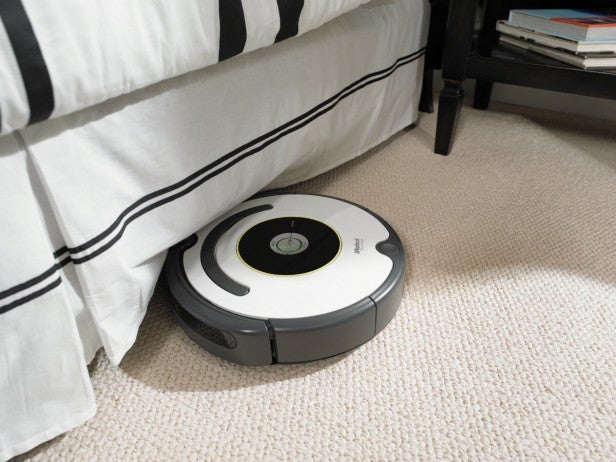 iRobot Roomba 620 Value
We touched on this briefly before and at £299 the iRobot Roomba 620 is a substantially smaller outlay than the £429 Neato XV-25 and £449 iRobot Roomba 780. Arguably the iRobot Roomba 620 cleans as well as both these bots so the £120 and £150 saving respectively is more about whether you can live without the full bin alert and virtual walls (pictured below) which, while compatible, from iRobot cost £33 individually or £45 for two. Similarly scheduling can be added via the Wireless Command Center accessory, but costs £45 so again the price creeps up (edit: the 600 series is not compatible with the Wireless Command Center. iRobot is mulling a version for the 600 series, but it means you will currently have to decide at the point of purchase how important scheduling is to you). 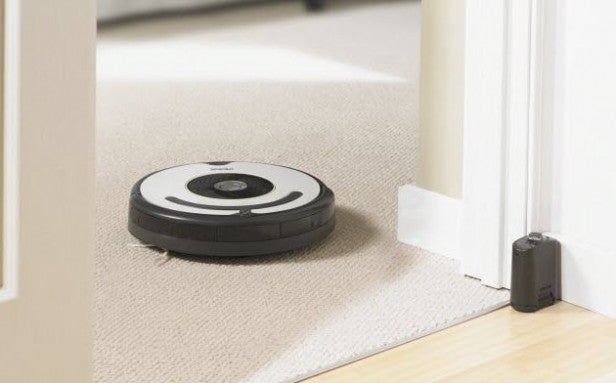 There is clear value in the iRobot Roomba 620 and its level of performance is a new benchmark at this price point, but it only makes for a smart investment if you can do without buying this raft of accessories. A positive spin is it does allow for a smaller initial outlay with the option to add functionality as you go. Then again the iRobot Roomba 650 will soon launch at £379 with an on-board scheduler and one virtual wall included (but not full bin indicator) which could make it the sweet spot in the range.

iRobot Roomba 620 Verdict
While the wait goes on for the first high quality sub-£150/200 robot vacuum to entice the masses, the iRobot Roomba 620 delivers breakthrough cleaning performance and battery life at the sub-£300 price point. This still remains no small outlay and while you are getting a machine which excels at its job, the omissions of a simple full bin indicator, virtual wall and – more substantially – a cleaning scheduler mean you need to focus on loving it for what it does, not getting frustrated at what it does not.