How busy are you, really? If you are considering spending the best part of £500 on a device to assist with the vacuuming then the obvious riposte would be to suggest you take a long, hard look in the mirror. The surprising news, however, is in this case you may come away from it smiling.

iRobot has been in the robot vacuuming business since 2000 and the ‘Roomba 780’ is the company’s latest and greatest. After selling 7.5m units worldwide over the last 12 years the circular form factor is well known, but much of what is inside the 780 is brand new. 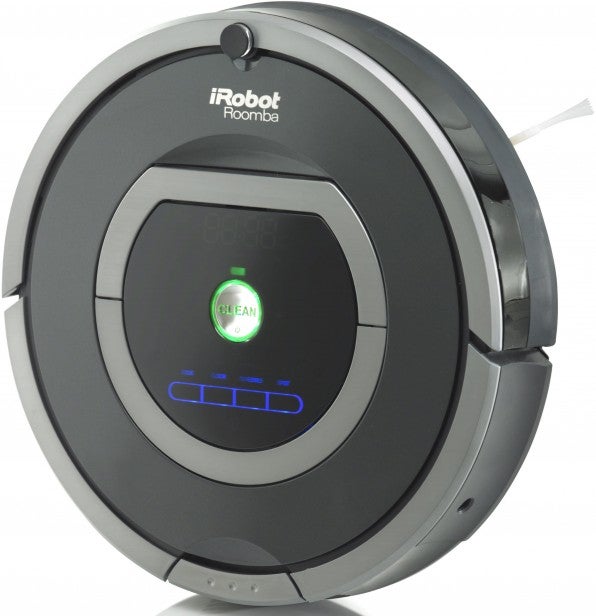 The 780 is the flagship of iRobot’s new top of the line 700 series and core to this is the upgraded iAdapt navigation system. This monitors the surrounding area making 64 checks per second to both track its way around objects and to gradually learn the complete layout of its cleaning environment. The result is the 780 can then apply the most relevant cleaning motion to each space, be it long sweeps, circular motions when detecting dirt heavy spots (iRobot calls this ‘Persistent Pass Cleaning’) or free form movement around cluttered or small spaces.

Of these iRobot is keen to stress the ‘Dirt Detect Series 2’ technology inside the 780. To improve pick up it uses an acoustic sensor to detect excessive amounts of small and hard debris (such as sand) and an optical sensor to detect larger and soft debris (such as popcorn). Also new is an ‘AeroVac Series 2’ bag-less bin with easy release (dirt is simply tipped out once removed) and the addition of a common sense full bin indicator. You will likely need to empty this more regularly since the 780 has new power management software which iRobot claims will provide up to 50 per cent longer battery life than previous generations. As such a single cleaning session lasts approximately 90 minutes. 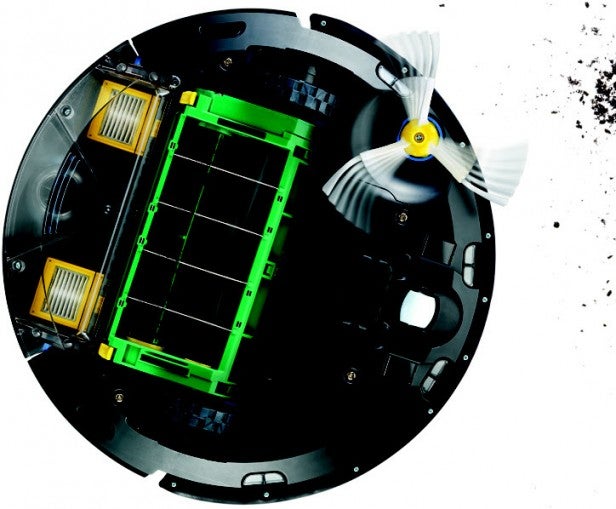 This is just the start of the technology designed to keep your lazy backside on the sofa. Scheduling is now done on the top of the Roomba with simple touch sensitive buttons allowing you to select each day and whether you would like the 780 to clean at a specific time or not. Day, hour, minute, confirm and clear buttons make this a doddle and the Roomba’s internal clock keeps it in check. Meanwhile dual HEPA filters capture dirt, dust and pollen from the air.

Like previous Roombas, the 780 doesn’t miss out on other core features like ‘Cliff detect’ which senses stairs or drop offs, ‘auto docking’ which sees the 780 return to its charge station when low on power and anti-tangle safeguards which stop the Roomba from munching its way through cables. Like all Roombas, the 780 retains an extremely low profile measuring less than 10cm tall allowing it to pass under beds, coffee tables and even open cupboard drawers. Meanwhile the two supplied Lighthouses make their usual appearance and can be placed anywhere to cast a beam the Roomba will not cross (illustration with a Roomba 560 below). Lastly a flexible ‘soft touch bumpers’ stop it damaging objects should contact be made. 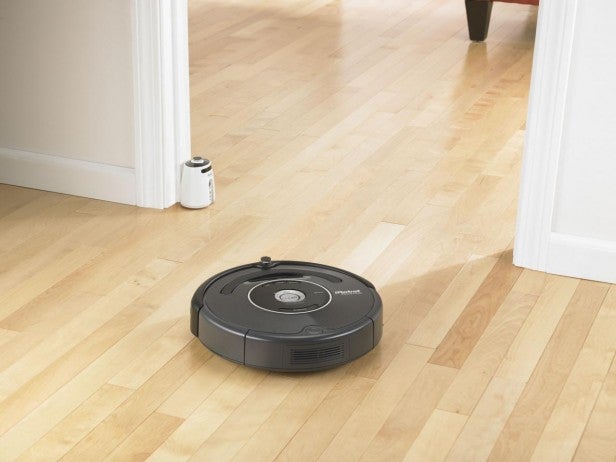 So does all this tech stand up in practice? Happily yes, with some inevitable caveats. Most obvious is that while the 780 may look like past Roombas this is the first model which truly does an excellent job of vacuuming dirty floors. We do think you will want to keep your existing vacuum for particularly tough jobs, but the 780 has remarkably impressive suction for its size and we found it had no problem lifting debris up to the size of a marble or in pulling tangled hair ground into the carpet. Similarly the 780 lives up to its claim of being a genuine multi-floor model happily detecting a switch in surface and adjusting its suction and cleaning patterns to suit.

The other major factor in the success of the 780 is the improved battery life. While a conventional vacuum will clean faster and offer greater suction than the Roomba, the vast majority of us don’t have the patience to vacuum for the circa 90 minutes it does on a single charge. As such part of the success of the 780 is its attrition, removing dirt through multiple passes (the dirty spot indicator is particularly sensitive) and going over each room again and again before returning to charge. 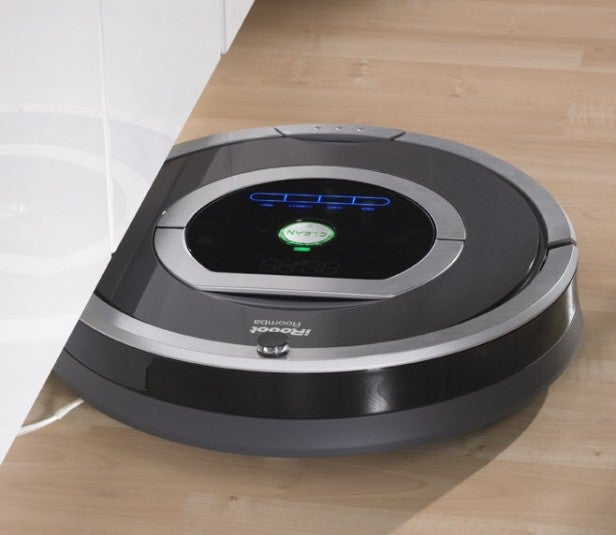 Schedule the 780 to clean daily and this affect is cumulative. It may have its work cut out the first time it enters a new owner’s propety, but a few days worth of cleaning and the amount of dirt is reduced to a level the Roomba can manage in a single session with ease. Another nice improvement is the volume level in operation. iRobot hasn’t stated the exact decibels, but we found it possible to still work in the same room (even if it has a mesmerising quality in action) and with a door closed it is possible to have telephone conversations. Could the 780 be scheduled to run during the night? It depends on how deeply you sleep, but we suspect the occasional bumps into your door would wake most.

So what about those caveats? The most pertinent is that while the 780 will take the chore out of vacuuming it does require some ‘Roomba proofing’. For example, while the 780 won’t damage cables if left around it will still drag them about and should you have particularly light doors it can bump into them after tracing along walls accidentally closing them and locking itself in a room. This is quite comical at first, but unless you want one spotless room every time you come home we would suggest investing in some door stops. Of course there is some maintenance too, but aside from emptying the bin or using the supplied tool to clean the brushes every so often it is largely hassle free. 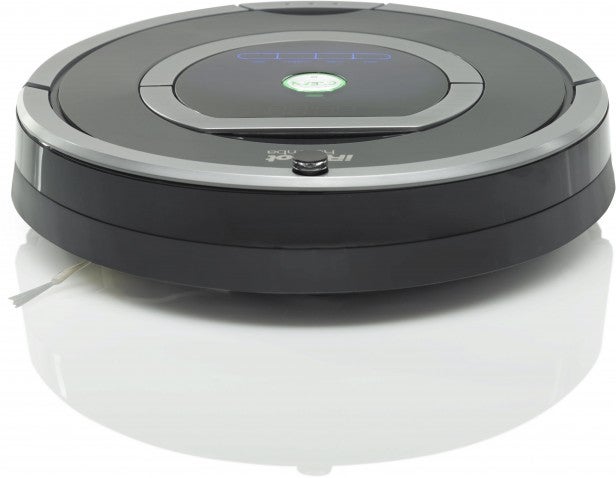 All of which leads up to cost. This is always the biggest caveats with any robotic vacuum and given the 780 is iRobot’s flagship model it is doubly so here. Should you pay it? It depends entirely on circumstance. In a multi-floored house the Roomba’s efficiency is greatly reduced (unless you are going to constantly move it or buy more than one), but for those with the means and a home or office largely on one level then yes. £450 is a large investment (£50 off its initial £500 RRP at some retailers), but it actually works and using daily cycles means your property stays far cleaner than it would using your conventional vacuum just once a week.

”’Verdict”’
For the first time we feel able to say a robot vacuum truly lives up to its title. This comes through the Roomba 780’s combination of improved navigation, increased suction and vastly better battery life. Yes some effort to required not to leave items needlessly lying about, yet at worst they will be spread around not damaged and remember to chock light doors. Don’t tell your friends how much you paid, because the 780 will become your most guilty pleasure.