Introduction
Everywhere you look in the tech sector right now complaints are building that we are in a period of evolution not revolution, nothing really excites us anymore. Arguably the same can be said of the new Neato ‘XV-25’ robot vacuum, a follow up to the Neato XV-15, but – much as the iPhone 3G was to the original iPhone – it feels like the mass market realisation of a revolutionary initial breakthrough.

Neato XV-25 Design
None of which you’ll expect when you take the Neato XV-25 (called the XV-21 in the US) out the box. The Neato XV-25 is the spitting image of the XV-15. It retains the ingenious arch shape (the corners are for corners, the curves allow it to turn anywhere) and the build materials are still a little cheap looking with a fetish for plastics and two tone colour finishes. It looks like a Super Nintendo was squashed under the heel of a giant horse. 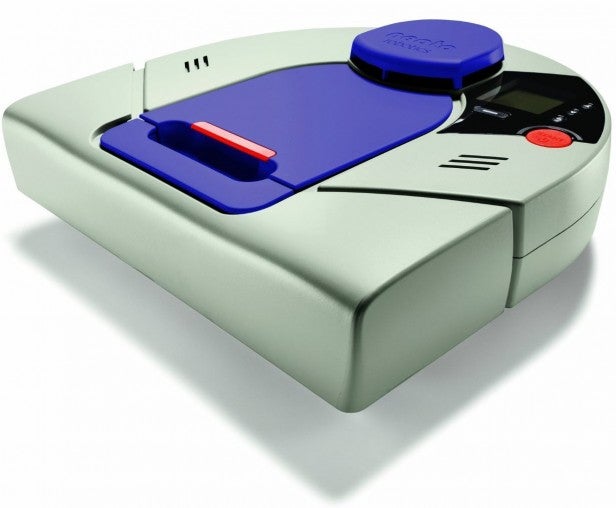 This is a problem. Compared to the slick lines and finish of the iRobot Roomba 780, for example, the Neato XV-25 looks like the brandless knock-off you’d find in an unwanted catalogue dropped through your mailbox. When you get to the technology inside, however, this is a huge disservice. The same can be said of the charger which, while conveniently flat for positioning against a wall, is essentially a hollow plastic shell which houses a power brick.

There are things to like, however: the inclusion of an LCD display makes programming daily and weekly cleaning schedules a doddle – especially compared to the Roomba range which mysteriously continues to ignore them – and removing dirt is simple: just pull out the collection box (indicated by the red handle). At 33 x 32.7 x 10.1cm the Neato XV-25 is also fairly compact, though it is heavy at 5.9Kg – something you’ll notice when it runs over hard floors. 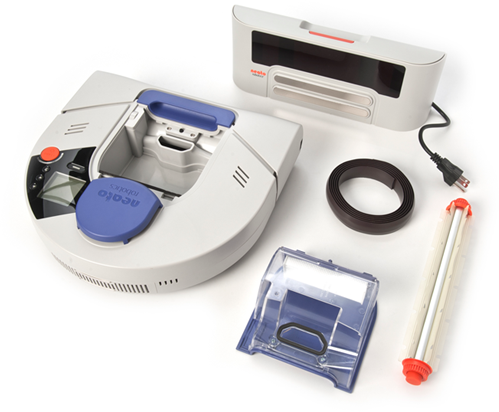 Neato XV-25 Features
Love or hate the look of the Neato XV-25, however, what has come to define Neato’s robot vacuums (and redefine them in the sector) is how they go about their business. Neato was only formed back in 2009 and didn’t release its first product until 2010, but what got investors hot under the collar was the SLAM (Simultaneous Localization and Mapping) technology at their heart. Unlike so-called ‘bump bots’ which seem to take an almost random approach to cleaning, SLAM robot vacuums calculate their every move.

What SLAM does is build maps of an environment while simultaneously keeping track of its location within them. The theory is it almost never needs to bump into any surface and it will clean logically: first by tracing the corners, then cleaning the rest of the room in long strips. The whole approach is somewhat akin to how a farmer ploughs a field.

On top of SLAM, the Neato XV-25 has the now industry defactos of edge detection (to stop it falling down stairs), spot cleaning (repeated runs over more ingrained dirt) and auto docking when low on power. It is also the first Neato robot vacuum to be designed for pet owners and allergy sufferers. As such it has a bristled brush to improve pick-up of pet hair, dander and fibres and a new filter which Neato claims will retain 3x more fine dust particles while allowing greater suction. The filter is washable and designed for long term use (though a second is provided in the box).

Neato XV-25 Performance
So the looks divide and the technology excites, but how does the Neato XV-25 perform? The answer is brilliantly… with caveats. SLAM certainly has a flair for showmanship. The Neato XV-25 leaves its dock silently, stops, builds up suction and airflow somewhat reminiscent of a helicopter while all the time mapping then finds the nearest wall to start the process of tracing the outline of the room. 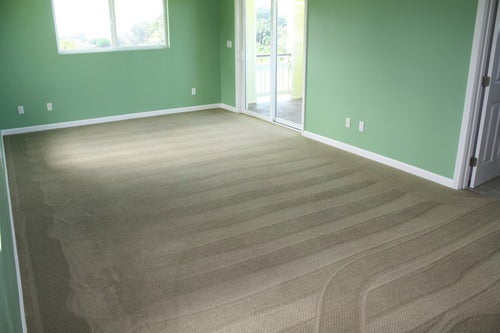 This makes for a decent spectacle and watching the Neato XV-25 in action is a wholly satisfying affair as it seems to be applying human logic and order to every obstacle, cleaning in a progressive way and its bumper virtually never comes into contact with any object. As such the Neato XV-25 is both a satisfying substitute to manual vacuuming and a highly efficient one. It completed our test environment (a 60m2 flat with numerous chairs and objects deliberately left strewn around) in roughly 45 minutes, about half the time it took the flagship iRobot Roomba 780.

Furthermore since the Neato XV-25 is not bumping into objects it doesn’t suffer from the old bump bot problem of shutting itself in rooms because it doesn’t knock into doors when it is cleaning behind them. This is a great confidence builder as you don’t feel the need to ‘robot proof’ the flat before leaving with various door chocks and wedges. This smart detection and location data also has another pay-off for larger houses as the Neato XV-25 has no problem finding its charger when low on battery and no problem automatically returning to where it was to continue cleaning when its charge is restored. We found a single charge was more than enough to do our flat, but this will be a huge benefit to larger houses. 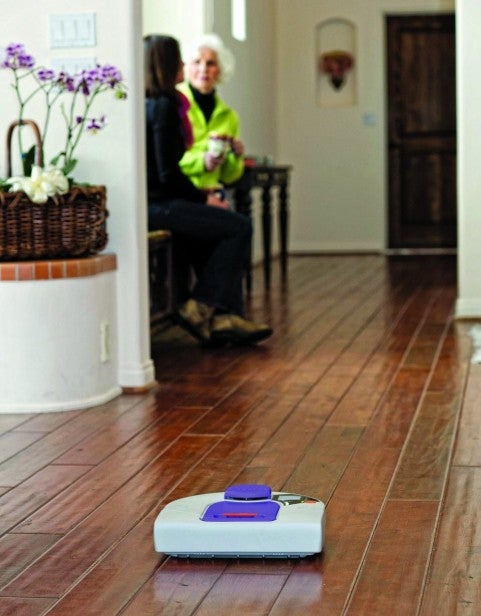 Hard floor performance is good too. The slightly harder rubber used on the wheels makes it a little noisy rumbling along, but it automatically detects the change in surface and adjusts its brush and gears accordingly. The bristled brush here is a boon and it collects dirt, hair and fluff with ease rather than slinging it around the kitchen as we’ve seen other bots do in the past.

So what are the caveats? Well for all the sophistication of SLAM the downside is it means the Neato XV-25 doesn’t always get into hard to reach nooks and crannies instead preferring to trace an elegant route around them. The 1-inch ‘strip’ issue we found the Neato XV-15 left around borders is gone, but there are a number of occasions where we feel the XV-25 could do with being more aggressive.

By definition this is a hard line to walk of course, but it is one where the more inelegant approach of deliberately bumping into surfaces as iRobot’s iAdapt technology does can have better results. That said SLAM is infinitely easier to live with day-to-day. 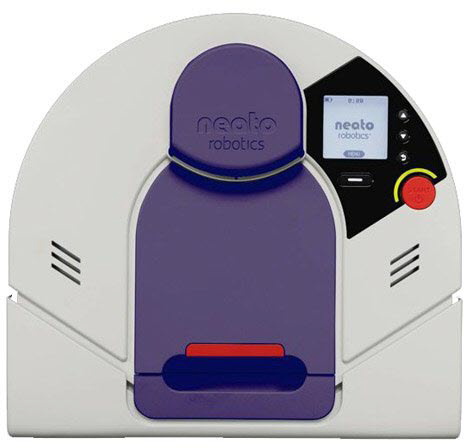 Other grumbles? The Neato XV-25 is definitely one of the louder robot vacuums we’ve used, but the noise is predominantly airflow so it isn’t too bad to live with – besides, as we already pointed out, it can be left on its own with confidence. Lastly the magnetic strip used as a barrier to stop the Neato XV-25 from passing through a certain door or beyond a certain section of a room is a bit limited. It’s a decent 3m in length, and can be cut to size, but isn’t as easy to lay as some rivals which use laser towers to mark out restricted areas. Then again Neato’s solution doesn’t require batteries.

Neato XV-25 Value
As the little guy operates with smaller volumes Neato does well to stay competitive in terms of pricing. Naturally enough the £429 RRP means the Neato XV-25 is far from an impulse buy, but it is £20 less than the iRobot Roomba 780 which has been our performance benchmark in recent months. Comparing the two we find the 780 to be the more aggressive cleaner, but it does bump into everything all the time. By contrast SLAM makes the Neato XV-25 a better behaved house mate and cleaning performance is still strong. Given neither will completely replace your full size vacuum we are therefore tempted to come down on the side of the newcomer. 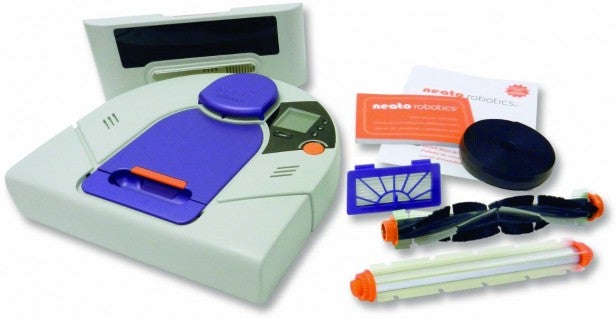 Neato XV-25 Verdict
Watching the Neato XV-25 in action is a revelation. It calmly maps out a room, cleans around the borders then vacuums in long, overlapping strips. Very little gets bumped and it can always find its base if in need of a top-up charge before heading out to pick up exactly from where it stopped. The credit for this goes to Neato’s SLAM technology. It isn’t perfect yet, and can sacrifice thorough cleaning of corners and tight spaces in favour of elegantly gliding past them, but it represents the future of robot vacuums and rivals should be scared. Build materials could be better and pricing remains high (if in line with the competition), but should you have the means we thoroughly recommend picking one up.