If you own an iPhone and want to get into capturing VR-friendly 360-degree video, the Insta360 Nano is one of the easiest ways to get started. It’s a simple iPhone attachment that houses dual cameras and connects to your iPhone through the lightning connector.

The camera will work with iPhones dating back to the iPhone 6 all the way to the brand-new iPhone 7 (and Plus), but will also happily work independently – provided you don’t need a live view display.

If you’re looking for simplicity, the Insta360 Nano has plenty to like. However, its budget-friendly price also amounts to some so-so quality video, even if 3K video at 30fps on paper sounds pretty impressive.

The Insta360 Nano has a slim-profile design that hugs the back of your iPhone when plugged in. Since the Insta360 Nano technically plugs into the bottom of your phone, the app is flipped vertically so you hold your iPhone upside down. This places the pair of opposite-facing f/2.0 lenses at the top. If you use a case on your iPhone, there’s a pretty good chance you’ll need to take it off to attach the Insta360 Nano.

At only around 70g, the Insta360 Nano is pretty lightweight, and a soft slip pouch is included to transport it around. You’ll need to be reasonably careful with it, though, since it doesn’t feel the most solidly constructed; it feels rather plasticky. 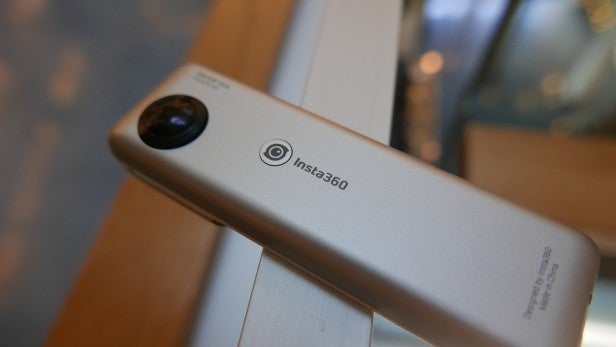 The lenses aren’t particularly bulbous compared to other 180-degree lenses, such as on the similar LG 360 CAM. Each lens here actually has a field of view of 210 degrees, which I imagine helps to more seamlessly stitch the two images together for 360-degree spherical video.

However, the lenses are completely exposed, so you’ll need to be careful not to damage them. The LG 360 CAM had a slip-over hard case for this reason – it made the camera look a little like an asthma pump – but there’s no equivalent protection here. The pouch really doesn’t offer much in the way of protection.

The only control located on the camera is a power button on the back, which also doubles as the shutter button for when you’re using the Insta360 Nano independently of your iPhone.

The camera doesn’t drain battery power from your connected iPhone, which is good, since it has its own internal battery. Slightly annoyingly, you recharge the Insta360 through micro-USB, meaning you have to carry around an extra cable. 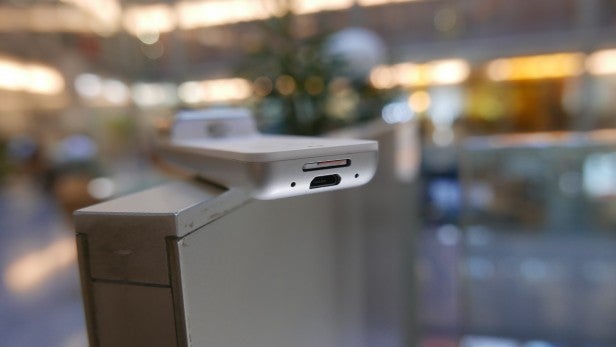 Since it can be used independently of your iPhone, the Insta360 Nano stores its images and video to a microSD card you insert into the bottom of the device.

It pays to keep hold of the Insta360 Nano’s packaging, and not just to retain its resale value. The packaging is actually a Google Cardboard-esque VR headset that you can use to play back your videos. It’s a nice touch and means you’re set up for VR, even if you don’t own one of the better headsets on the market.

Just pop your iPhone in and you can watch your 360-degree video through the app, or use it with other content much like Google Cardboard.

When you first attach the Insta360 Nano to your iPhone, you’ll be prompted to download the accompanying app from the App Store.

The app is as basic, no-frills affair. You’re able to get a live view of the sensors and you can pan around by swiping, which lets you view what’s being captured from both cameras. You can swap between still image and video modes with a toggle above the on-screen shutter button. 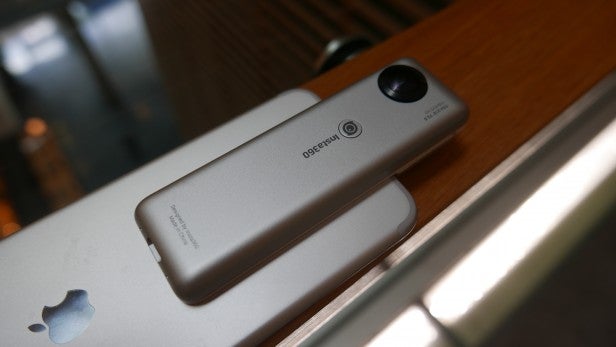 There aren’t many settings you can change while taking images or recording video. There’s a timer mode, some exposure compensation, a few filters you can apply, and a “beauty” mode that just appeared to be another filter.

Perhaps defeating the purpose of a 360-degree camera, there’s no option to use just one of the cameras, even for capturing a still image. Sometimes, you just don’t want a 360-degree result; this was an option available on the LG 360 CAM, which I found handy. 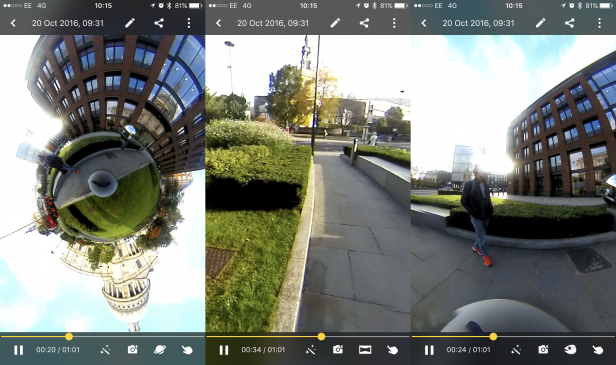 If you don’t want to use the app, as mentioned, you can use the Insta360 Nano camera by itself. After powering it on, a single press of the rear button captures a still image, a double-press starts video, and you can configure a triple-press to start a timed capture.

Again, it was here that I wish you could just use one of the cameras. That way, it would operate much like HTC’s ill-fated HTC Re camera that, while not the greatest device in the world, was handy for capturing fleeting shots quickly.

The other trick in the Insta360 Nano’s arsenal is live streaming through your iPhone’s internet connection. You can configure it to work through Facebook Live or YouTube. I used the latter, following the company’s online tutorial video. There are a few hoops to jump through, but I managed to get it working perfectly in the end.

The Insta360 app can also be used to view your images and recorded footage. You can toggle between different viewing modes such as Globe, Panorama and Fisheye views for when not using the app in a VR headset. You can also choose to look around by swiping, or by using your iPhone’s gyroscopes.

The Insta360 Nano is capable of recording video at up to 3K resolution (3,040 x 1,520) and 30fps. The actual resulting video quality isn’t particularly impressive, however. There isn’t a particularly great level of detail, with the resulting video appearing a little dark and noisy, even in ample lighting.

Objects against the sky are prone to chromatic aberration, highlights have a tendency to be over-exposed, and shadows can appear as just dark patches with no detail. In fairness, these are complaints I’d level at many of the 360-degree cameras I’ve tested – including the LG 360 CAM – but I couldn’t help but feel underwhelmed.

Video tends to look better on the iPhone screen, compared to when uploaded to YouTube or viewed on a larger display. However, flaws become apparent again if you do put the iPhone into the headset, since the screen is then so close to your eyes and therefore accentuates the flaws.

Image stitching can also be a little bit off, with some ghosting where the two images overlap. There’s a calibration option in settings, but this didn’t seem to rectify the problem. A lot of 360 cameras struggle with the stitching, especially when objects are close to the camera.

Accompanying audio is a little flat and underwhelming. Sound is just as important as the visuals when it comes to immersive VR footage, but there’s no sense of directionality here. The microphones aren’t particularly sensitive in an open space, so the atmosphere and ambience of your environment aren’t particularly well captured.

In addition, after a few minutes of recording video, I noticed that the camera and my iPhone became a little warm to the touch.

As for battery life, the battery needed recharging after an hour of use, which is reasonable for a 360-degree camera.

Still images fare a lot better than video. It’s sharper, so detail such as grass is actually retained, and exposure is much better managed overall. There’s a slight delay when capturing an image, so you’ll need to factor that in. Photos saved in the Globe mode view in particular look very cool. 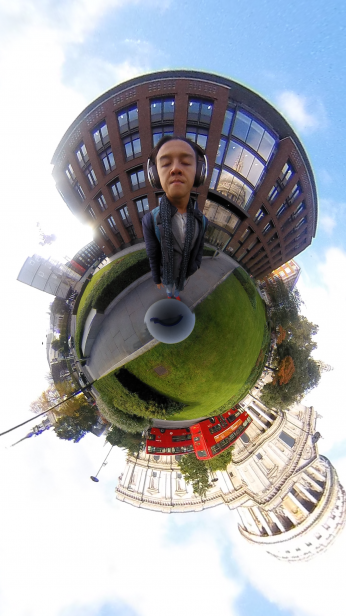 The shutter lag is probably why I’m blinking…

You can upload 360-degree images to Insta360’s servers to share – but, annoyingly, to get the actual share URL you need to choose to share it in a different app first, such as Twitter or WhatsApp. Only then does the URL become available to you. Before that it isn’t obvious it’s actually been uploaded anywhere, so the whole process is a little puzzling at first.

You can view a sample image uploaded to Insta360’s servers here.

Should I buy the Insta360 Nano? 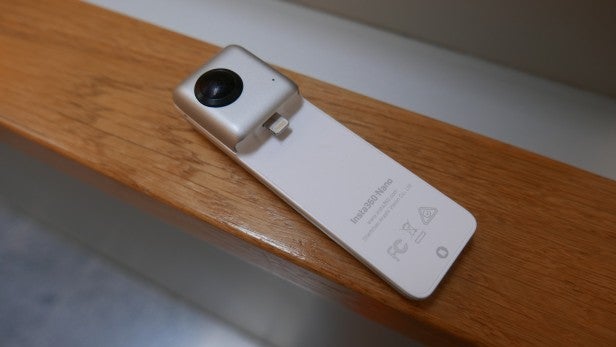 If you want a quick and easy way to capture 360-degree videos and images, and own an iPhone, the Insta360 Nano might appeal. Its size makes it easy to carry around with you for those moments where capturing a 360-degree video or photo would apply itself well.

If you’re more concerned about actual image quality, though, the LG 360 CAM has the slight edge. It also provides a more refined user experience with a better-designed accompanying app. You’ll also not be locked into using an iPhone, since it connects to your smartphone through Wi-Fi pairing, making it a more versatile alternative.

The Insta360 Nano is a quick and easy-to-use 360-degree camera – but video quality and the accompanying app are poor.