Apple’s iMac range needs little introduction. The first iMac was the beginning of a new era for Apple and it remains one of its most iconic products. These days it comes in 21.5-inch and 27-inch versions, and it’s the 2013 iMac update of the latter we’re looking at today. The 27-inch versions are really for power users. Prices start at £1,599 and rise exponentially depending on the options. After last year’s breathtaking new design, however, the 2013 update deals with the insides only, with new Intel Haswell processors, updated graphics and faster flash memory being the key upgrades.

Apple iMac 27-inch (2013): Video Review
Get a quick snapshot of our comprehensive review with our video review:

We won’t dwell too much on the design because: one, it hasn’t changed; and two, it speaks for itself. The slim body, flawless aluminium finish and effortlessly smooth hinge talk both to its beauty and its quality. The most controversial issue is the lack of any optical drive, but this is 2013 and we’ve got quite used to this now. Any holdouts may want to stick with what they’ve got, or buy an external drive if needed.

Elsewhere the features are typical of Apple, minimal but just enough for the great majority of people. There are four USB ports, two Thunderbolt ports (which double as mini-Display Port outputs), an SD card slot, Gigabit Ethernet and a single combination audio in/out jack. Bluetooth 4.0 and 802.11ac Wi-Fi round-up the connectivity such as it is, the latter being a small upgrade on the Apple iMac 27-inch (2012) model. 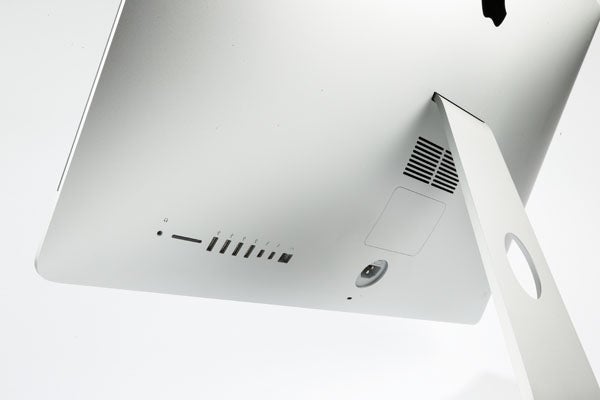 Those two Thunderbolt ports are pretty important, partly because you can daisy chain numerous peripherals on the same port, partly because of Thunderbolt’s breathtaking speed (double USB 3.0 in ‘theoretical’ terms), but mainly because they mean you could drive two further monitors at up to 2,560 x 1,600 – a prospect so tantalising our inner geek is doing somersaults at the very idea.

Sticking to more grounded items, our particular 2013 iMac came with a small standard keyboard and the Magic Mouse. The former is an excellent keyboard and there’s the option for a large one with a numeric keypad at no extra cost. The latter, however, is a mixed affair. It’s a reasonable compromise for anyone who can’t countenance the idea of using a trackpad, but we strongly prefer (and recommend) the Magic Trackpad (a wireless version of a MacBook trackpad) instead. It costs no more and works seamlessly with the various gestures supported in Mac OS. 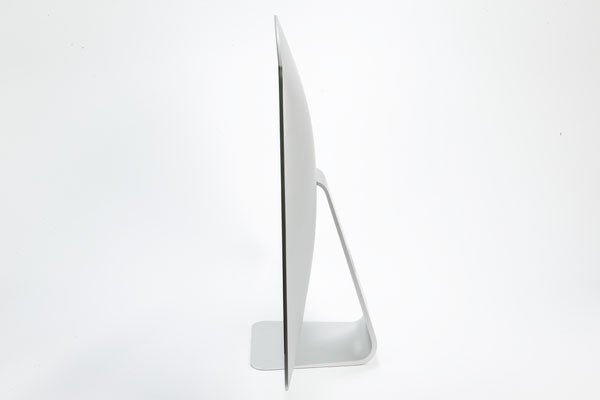 The size of the 27-inch iMac means the screen is the first thing most people notice. Its 2,560 x 1,440 resolution is very high, not ‘retina’ high but that’s not a realistic expectation with a screen this size as making it ‘retina’ would be extortionately expensive. It might happen in future, but not right now.

As with our monitor reviews, we broke out our Xrite i1 Display Pro 2 to get an idea of how the screen measures up. The result is very good, albeit with one small caveat.

The peak brightness is a retina burning 337 nits, while a DeltaE (a measurement of colour accuracy) of 2.13 is good. We wouldn’t qualify these as ‘professional’ level results, but then the glossy finish rules out genuine professional use (by which we mean absolute colour critical work) from the outset. But for a consumer monitor it’s very good and many regular professionals should find it ample for their needs. 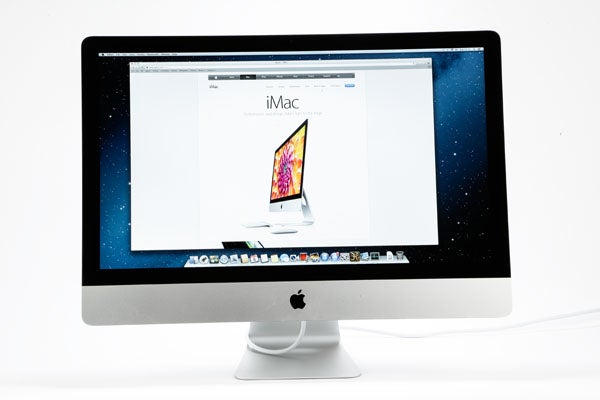 The ‘consumer’ focus brings us to the caveat, which is that default colour profile crushes blacks a little too much for our liking in favour of producing a ‘contrasty’ appearance. This means you lose details in dark scenes of HD video, the kind of details we want to see. Some will prefer this look, perhaps, but if you’d rather see all the detail available there’s a simple fix: just select the Adobe RGB (1998) profile in the ‘Color’ control menu. It restores the detail and still maintains decent black levels.

Finally, while the glass front means this isn’t a true professional class screen, reflections aren’t anything like as bad as you’d expect. This is largely down to changes introduced last year, namely an improved coating and tighter air gap, but the result is impressive. The excellent peak brightness helps here, too, and means we didn’t have serious problems in a brightly lit office environment.