The Huawei MateBook X Pro is a great all-round laptop with a lovely ultra-portable design, gorgeous 2K display and a performance decent enough to handle basic productivity tasks. A terrible webcam and a reflective display are the main factors holding it back from challenging the Dell XPS, but it's still a great value option for the likes of students and office workers

The MateBook X Pro 2020 is a true flagship laptop. It comes with either an i5 or i7 10th-gen chipset, 16GB of RAM and a glorious design headlined by a fantastic display.

Stiff competition comes from the new MacBook Pro 2020 and the excellent Dell XPS 13, but the MateBook X Pro 2020 can more than stand up to those rivals.

Design – One of the best looking laptops you’ll find

In its main Emerald Green hue, the Huawei MateBook X Pro 2020 is a gorgeous laptop; it’s easily one the best-looking devices around right now. From its heavily chamfered edges that glisten in the light to the large, responsive trackpad, it feels as though every inch of this laptop has been well thought out and refined.

Huawei has the MacBook Pro series in its sights in terms of looks, more so than the Dell XPS 13 with its carbon-fibre interior. It also doesn’t try to be as small as the XPS 13, deciding instead to offer a squarer, larger display. Still, weighing 1.3kg and packing dimensions smaller than Apple’s latest 13-inch laptop, the MateBook X Pro 2020 is still a machine that will easily slide into your bag without adding too much extra bulk. 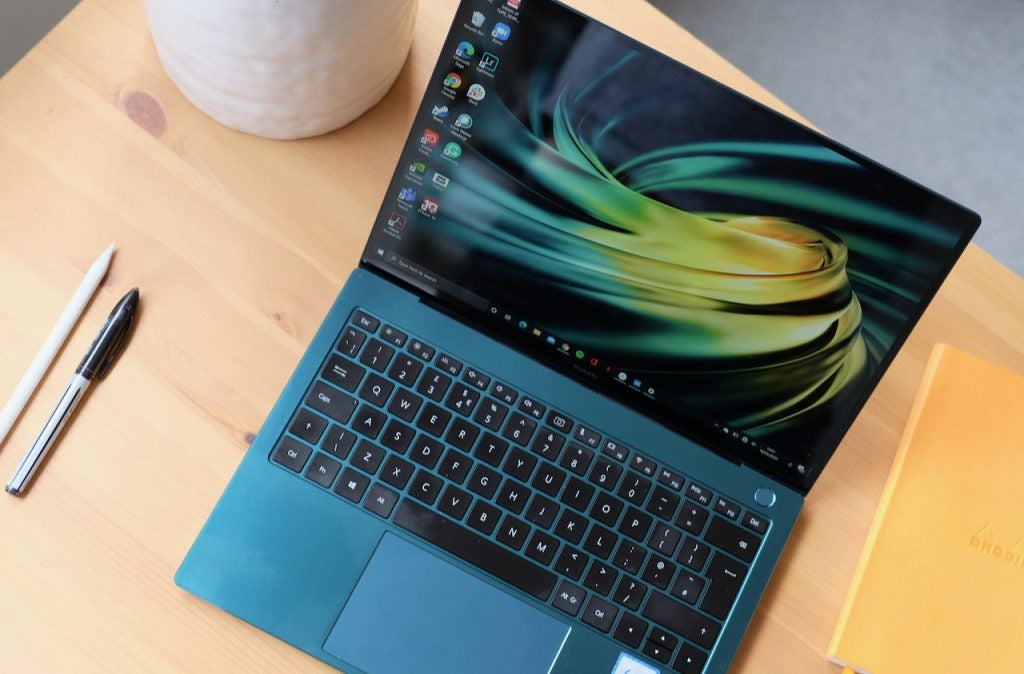 Huawei impresses with the port selection, too, pairing two USB-C ports (both of which can be used for charging and one packing Thunderbolt 3 support) with a single traditional USB 3.0 port and 3.5mm headphone jack.

While I’d have preferred a greater number of USB-C ports, including that older USB-A port helps productivity and removes the constant need for dongles and adapters. The MateBook X Pro lacks an SD card slot, however; the addition of one would have really completed the package.

Like the MateBook’s overall composition, both keyboard and trackpad design are well thought out, making for some of the best additions I’ve used.

The backlit keyboard remains identical to the unit that featured in the previous MateBook X Pro. Its springy keys are well spaced out, packing sufficient travel to leave you bouncing around the keyboard free of making too many mistakes. It’s similar in many aspects to the Magic Keyboard on the newer MacBooks, and you’ll notice a significant improvement if you’re upgrading from an older Mac with a butterfly keyboard.

Positioned just above the keyboard is the circular – and colour-matched to the laptop – Windows Hello certified fingerprint scanner. This isn’t the best security solution I’ve tried – it would often take a couple of attempts to recognise my digit. However, its presence at least means that when it does work, it offers a quick way to unlock the machine. Windows certification also means it will also work for showing your passwords in Chrome, for example, or authorising Windows Store purchases. 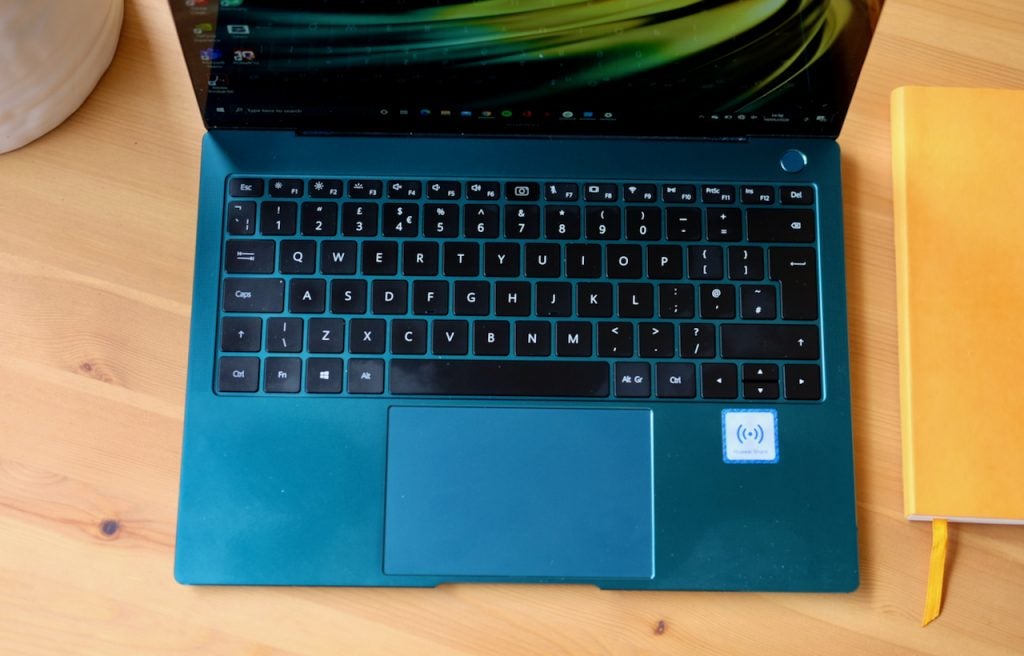 Hidden among the function row of keys you’ll find the pop-up 1-megapixel webcam – the biggest issue I have with this laptop. Now, the decision to hide away the camera makes sense and adds that bit of extra privacy. However, its positioning means it will always be looking up your nose, which is far from ideal. In addition, general camera quality is terrible – which doesn’t serve this laptop well given that video conferencing has become more important than ever before.

The trackpad, on the other hand, is a winner. Not only does it just about square up to the MacBook Pro’s unit for size, it’s responsive and consistently reliable too.

Display – The aspect-ratio might not be for everyone, but we love it

I love almost everything about the MateBook X Pro 2020’s 13.9-inch display. In fact, it’s been the feature that’s kept me glued to this machine for the past month. It also gives the laptop a unique twist; something I’ve come to expect from Huawei.

Unlike the majority of the competition, the display here boasts a 3:2 aspect ratio, which makes it squatter, squarer when compared to the more common 16:9 or 16:10 screens. The idea here is that the taller panel is better for cramming more into web pages – you’ll be scrolling less in long documents. Having used this form of display, everything else feels restrictive. 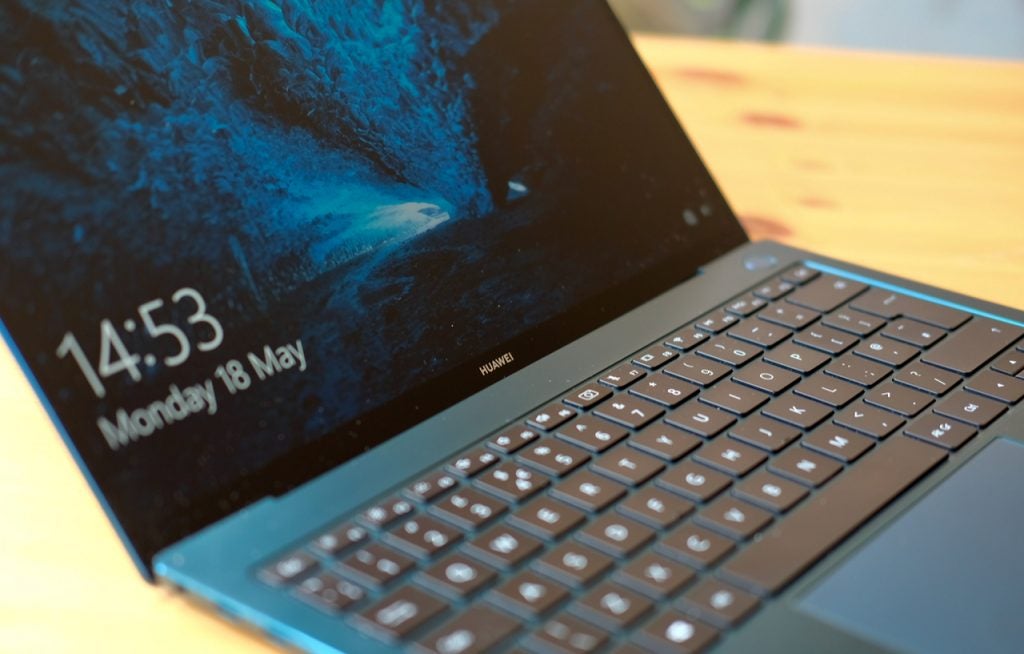 However, not everyone will be a fan, especially those who use their laptop to watch a lot of movies. The black bars around traditional cinema content will appear far larger here, and can prove distracting.

Elsewhere, the screen continues to excel. It has a sharp, if not quite 4K, 3000 x 2000 resolution, tiny bezels and the display is touch-enabled. I’m not the biggest fan of how Windows utilises touch, but here it’s responsive at least. Colours are bright and vivid, black levels are decent, and to my eye the brightness levels just about matched those of my MacBook Pro.

The only thing that stops this display from being class-leading is that it’s super-reflective. Typing out this review in a slightly sunny room, I can clearly see my fingers reflecting back at me. I tried using it outside on a mildly sunny day and I struggled.

Performance – What you’d expect from a high-end 2020 laptop

Huawei is positioning this as its flagship, high-end laptop, and the internal options reflect that. See the chart below for a full look at all the options available:

I’ve been using the top-end i7 10510U model; it’s a quick machine that remains near-silent when you’re putting it through its paces. Even though you do get a bump up to the Nvidia MX250 for graphics, don’t expect this machine to be pushing too many intensive tasks or games. I managed to run Football Manager 2020 with graphical settings set to low – which the machine handled well.

While I’ll get into benchmark tests shortly, real-world performance is arguably far more important. As you’d expect with the specs on hand, this machine handles day to day tasks without issue. More than 30 tabs open in Chrome failed to cause any lag, nor cause the machine’s fans to kick up a notch. Nor did I ever feel the need to close down apps – Lightroom, Photoshop, Steam for example – to keep the machine from becoming bogged down.

Below you can see the MateBook X Pro 2020’s benchmark results compared to some of its rivals. While I was a little surprised by the low scores, nothing I encountered during the review period led me to believe there would be an issue – as long as you keep to basic tasks and don’t intend editing video on a frequent basis.

Audio performance, too, is decent, with the speakers pumping out loud audio from either side of the keyboard. They can’t match the units that feature in Apple’s high-end laptops for pure quality – these speakers are far better for movies than detailed music – but they’ll still get the job done.

Huawei’s big software feature is Huawei Share, and if you have one of the company’s phones running EMUI 10, then it’s a handy addition. It will let you very quickly bulk-share snaps and media by tapping your phone on the laptop’s keyboard. It works well and is just about as successful as Apple’s AirDrop. It’s only a shame you’ll need a Huawei phone, rather than any Android, to take advantage of it.

Battery life – Will the MateBook X Pro 2020 get you through the day?

As is the case with most laptops running high-end i7 chips, the MateBook X Pro 2020’s endurance wasn’t always a winner. Battery life is by no means poor, but if I was away from my charger for a full work day then I’d be concerned that the device might not make it through that time without a top-up.

Depending on the battery setting chosen, I’ve achieved around 5-6 hours of screen-on time per day. This includes Chrome open with multiple tabs, Photoshop and Slack running in the background, and the odd bout of Spotify. Obviously, your mileage may vary, but I wouldn’t consider my use out of the ordinary for the target market of this device.

For watching video, the MateBook X Pro played a looped 1080p video for 8hrs 30mins before giving out. 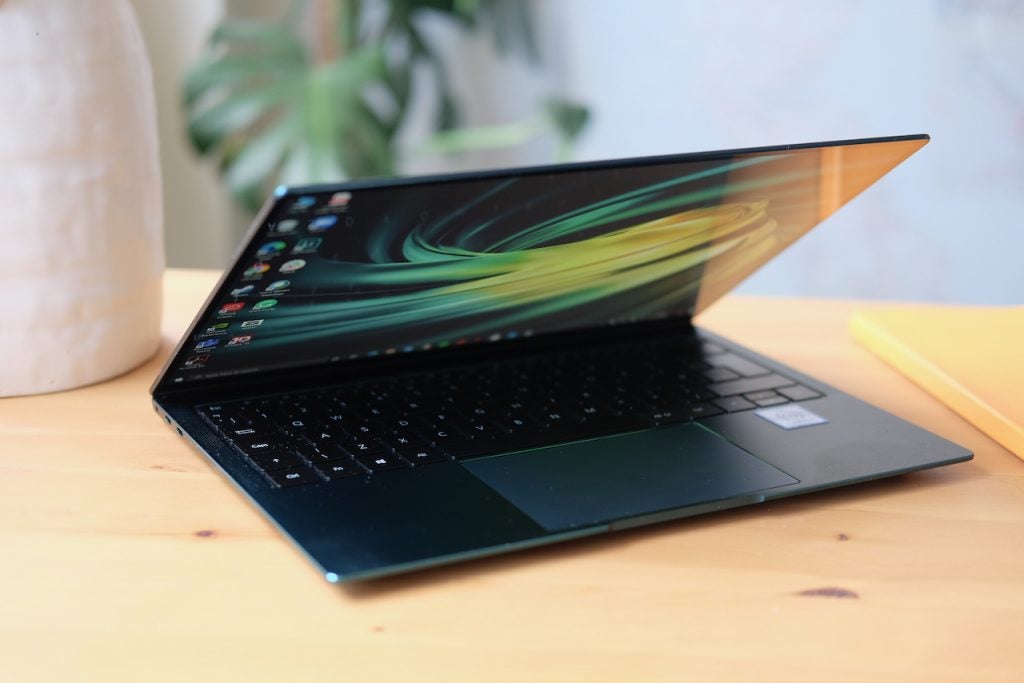 You should buy the Huawei MateBook X Pro 2020 if…

You shouldn’t buy the Huawei MateBook X Pro 2020 if…

Is the Huawei Matebook X Pro good for programming?

You’ll need a powerful processor and lots of RAM for programming. The Huawei MateBook X Pro features an i7 and 16GB RAM configuration, so be sure to opt for that model if you want it for serious programming.

Is the Huawei Matebook X Pro good for gaming?

No, the Huawei MateBook X Pro is not good enough for gaming. The Nvidia MX250 GPU is only really powerful enough for games such as Fortnite and Minecraft with low  graphics settings.

See our Best Gaming Laptop list for the best gaming laptops on the market.

Yes, the Matebook X Pro does feature a touchscreen.