The MacBook Pro 2020 is a great machine in many ways. Lovely screen, sleek design, excellent keyboard and stellar software. It’s highly customisable with large amounts of SSD and memory available, making it very versatile depending on how much you want to spend.

If you’ve been waiting to upgrade your MacBook Pro until the keyboard was fixed, then your time is now thanks to the new MacBook Pro 13-inch 2020.

The biggest upgrade this time around is the Magic Keyboard, which in itself will be enough for some to splurge.

But there’s more to the MacBook Pro 2020 than the improved keys and even with Apple Silicon on the horizon, this could be the best all-round MacBook Pro 13-inch yet.

Design and Keyboard – Magic Keyboard makes all the difference

I’ve been using a MacBook 13-inch daily since the last big visual refresh way back in late 2016, and after a few days typing on the new model I think I will struggle to go back. The biggest change here is the new Magic Keyboard, which replaces the derided butterfly switches with new scissor versions. If you struggled with the lack of travel and other issues the previous keyboards caused, then you’ll be far happier here.

The new keyboard is excellent, comfortably one of the best around. The roughly 1mm of travel is just enough and the typing experience is much easier and the feeling you’re tapping non-existent keys is gone.

The 13-inch Pro has also taken some inspiration from its excellent 16-inch sibling. There’s now a dedicated physical ‘ESC’ key and the Touch ID sensor is separate from the keyboard.

Apple’s touch-sensitive Touch Bar OLED strip is present across the whole range and it remains a feature I have never quite understood. It’s far from a replacement for a proper touch screen and, aside from Apple’s own apps, I have rarely come across third-party services that really know what to do with it. If I had the option to replace it with physical keys and save a bit of cash – or get more internals for my money – then I would. 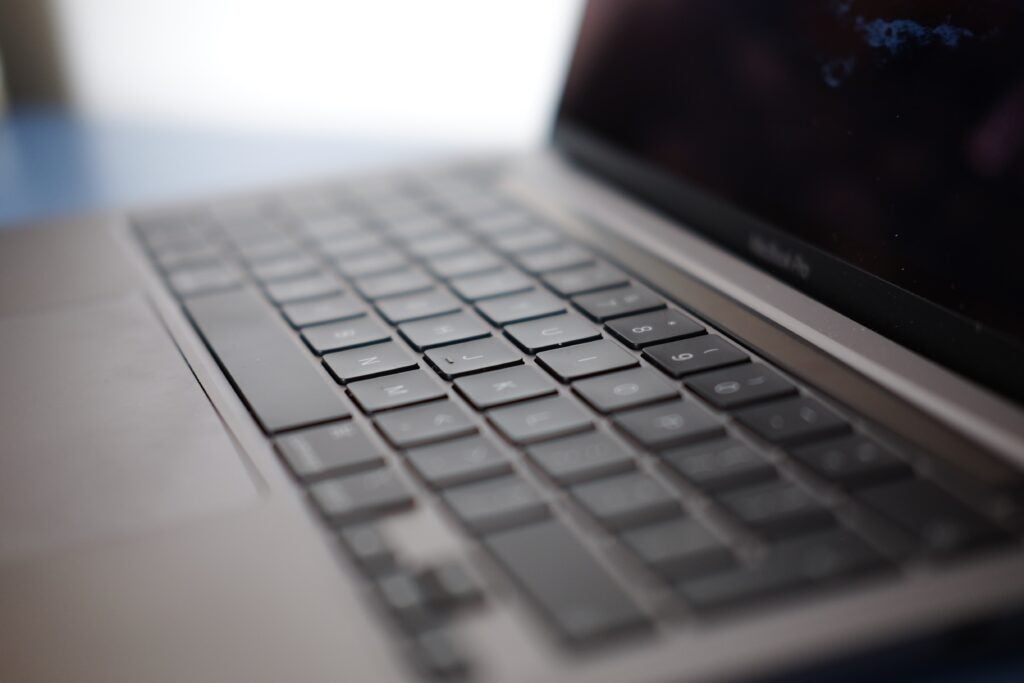 The Touch Bar remains above the new keyboard

Everything else about 2020 version of the MacBook Pro feels very familiar. The large, haptic trackpad remains excellent and the bar every other laptop should try and meet. The design might have been around for a few years, but I doubt anyone would call it tired looking. The aluminium unibody look is timeless and there’s a simplicity here missing from much of the competition. It’s clean, precisely finished and feels like it’s worth the high price.

A bit of modernisation would have been welcome, along with a couple more colour options aside from grey and well, darker, grey. Rumours of a 14-inch model suggested we’d get a bigger screen in the same size shell, thanks to a reduction of the bezel surrounding the display. That’s not the case and there does feel like there’s lots of wasted space here.

You either have two or four Thunderbolt 3 USB-C ports, with two sitting on each side. The 3.5mm port also, thankfully, remains. I’m a huge fan of USB-C and Thunderbolt 3 is supremely capable, allowing you to connect monitors, external GPUs and loads more with a single cable.

My only real qualm is the lack of an SD card reader, which feels like the one feature Apple should bring back – especially on a ‘Pro’-focused laptop. 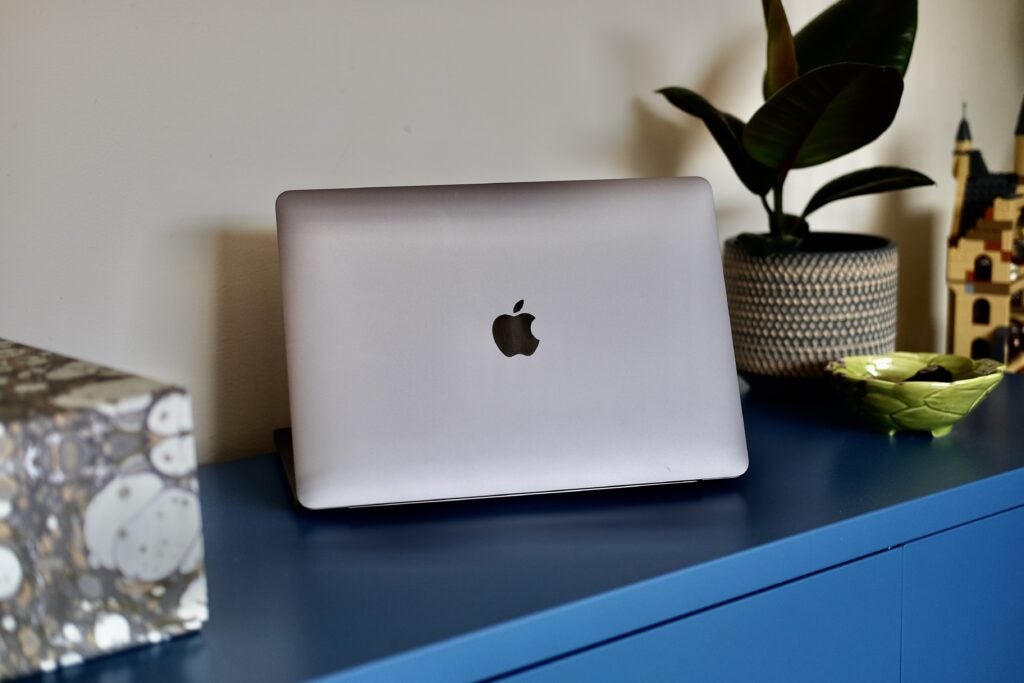 The 13.3-inch display on the MacBook Pro is great. It might not have features like 4K resolution, touch or even an OLED option, but in day-to-day use I can’t say I want anything more. Apart from a smaller bezel – that is something I do want.

This display is great in a number of ways and it’s far superior to the panel on the MacBook Air, even though they both have the same 2560 x 1440 resolution. The brightness here is much higher and it’s far more colour accurate thanks to DCI-P3 colour gamut coverage. Photos and videos pop on the screen and it’s even usable outdoors.

You’ve also got True Tone, the handy screen feature that changes the colour temperature depending on your environment. While you should definitely turn this off if you’re doing anything that requires colour accuracy, for general word processing and browsing it makes the screen a lot more comfortable on the eyes.

Performance – Plenty of oomph if you choose correctly

Choosing the right MacBook Pro is harder this time around as Apple is selling multiple configurations with quite varying features all under the MacBook Pro banner. The very base model (£1299/$1299) sticks with the older 8th-gen Intel chips, LPDDR3 RAM and just two Thunderbolt 3 USB-C port.

To get the true ‘MacBook Pro’ with its 10th-gen series chips, LPDDR4X memory and four Thunderbolt 3 USB-C ports you have to spend a minimum £1799. This model nets you a 512GB SSD, 16GB RAM and a quad-core 2GHZ i5 processor.

If you want more, there’s a 2.3Ghz quad-core i7 option and you can up the RAM this year to 32GB. There’s a 4TB SSD option too, so you can max this thing out if you want. It’s great having those options around, though it does seem slightly odd to keep the 8th-gen chips around on a laptop that comfortably starts at over a grand, especially in a year where Intel has launched its 11th Generation processors. 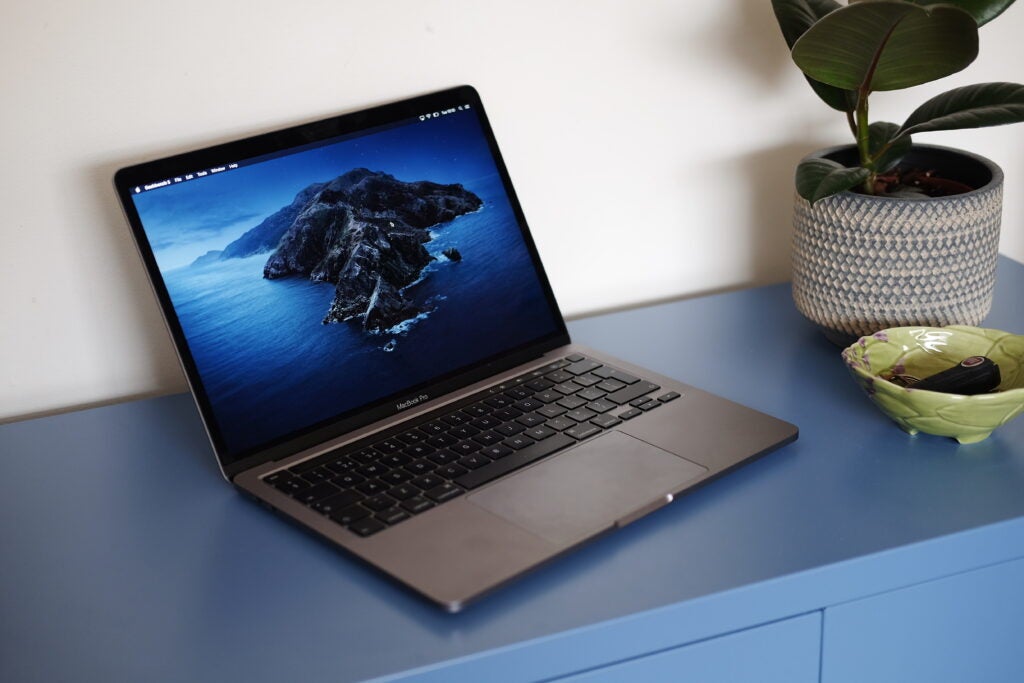 What’s the same across all the models is the keyboard, display and design. So don’t think you’ll be getting the older butterfly keyboard if you pay the bare minimum.

Throughout the review period, I have been using the 10th Gen quad-core i5 version with 16GB RAM and it’s a very capable machine that I have struggled to bog-down in day-to-day use. Everything in the OS feels smooth, from browsing to opening up apps and editing large RAW files in Lightroom.

I am a heavy Chrome user, with upwards of 50 tabs open all day on multiple windows and this didn’t cause the MacBook Pro even the slightest bit of an issue. In the Geekbench 5 benchmark test, the machine scored 1238 in the single core test and 4512 in the multi core version. That means you’re getting almost identical performance to the i7 model of the Dell XPS 13 (2020), which is roughly around the same price.

Unlike the 16-inch version, there’s no dedicated GPU here so all the graphics work is taken care of by the integrated Intel Plus Graphics. This is a big improvement over last year’s model and Apple claims you’ll see an 80% boost in graphics performance. It’s also powerful enough to output onto the 6K ProMotion display so there’s plenty of grunt. Still, if it’s real high-end graphics performance you’re after you might be better off looking at the 16-inch MacBook Pro.

Another impressive performer is the speakers, which push out class-leading audio. It’s loud, vibrant and never distorts. The same can’t be said for the 720p webcam, which really needs a huge improvement next time around.

I’ve been running the review sample with macOS Catalina, although the very much iOS-inspired Big Sur update is coming this year with a new look and many features ripped directly from the iPhone.

Like the MacBook Air, the MacBook Pro hasn’t received any huge battery boosts. This is still a strong performer though, and one that can comfortably stream video for over 10 hours and stay unplugged for a day of work.

That’s work that mainly consists of writing documents in Docs with Chrome, various video calls, Spotify streaming in the background and Slack pinging me constant messages. There’s a little light photo editing in the mix too, though no 4K rendering or anything too graphically intense. If you do factor in those tasks, then you’ll likely need to keep the USB-C charger handy.

You can charge the MacBook Pro from any of the four ports, and you don’t necessarily need to use Apple’s own charger. Third-party alternatives can often be smaller or pack multiple ports.

The final piece in the battery jigsaw is the fantastic standby times. I’ve left this laptop over a weekend without opening the lid and it’ll still be alive come Monday.

If you are interested in more battery life advances, it might be worth seeing how well the upcoming Apple Silicon Macs last. These will run of Apple’s own A-series chip designs and are expected to begin shipping later in 2020.