We try out Huawei’s second-gen MateBook 2-in-1

It’s safe to say I wasn’t a huge fan of the Huawei MateBook that launched in 2016. As a first attempt at a 2-in-1, it had some hallmarks of a good device, but overall felt compromised. Fortunately one year on, I think Huawei might almost have cracked it with the new MateBook E.

Almost everything about the tablet portion of this 2-in-1 remains as it was in the first device. It has the same ultra-low-power Intel chips, although updated to the latest generation, and the same 12-inch 2160 x 1440-pixel IPS display. So far, the best parts of the recipe haven’t changed.

But the worst parts have. The first-gen MateBook came with a terrible folio keyboard, which used a folding magnetic stand to keep the screen upright. It didn’t work particularly well; it was difficult to use. This time around, Huawei has gone for a much more robust, hinged approach – and it’s good. 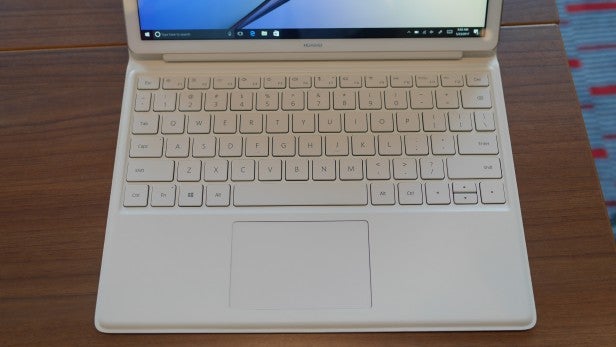 Essentially, it’s a piece of faux-leather attached to a firm hinge. In practice, it works reliably well. Tilt the stand to any angle and it will remain in place. It provides a huge degree of freedom – to the level of the Surface Pro 4. The MateBook E still feels inferior quality-wise, but that’s a compromise you’ll have to make for a cheaper 2-in-1. 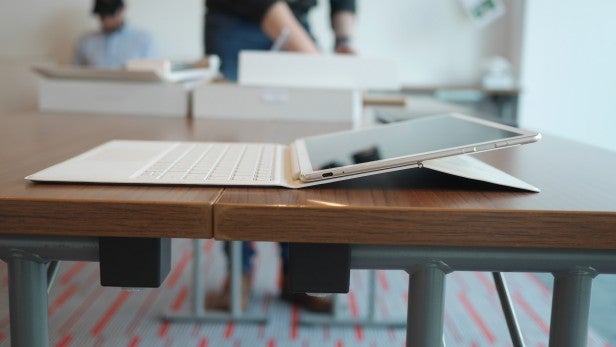 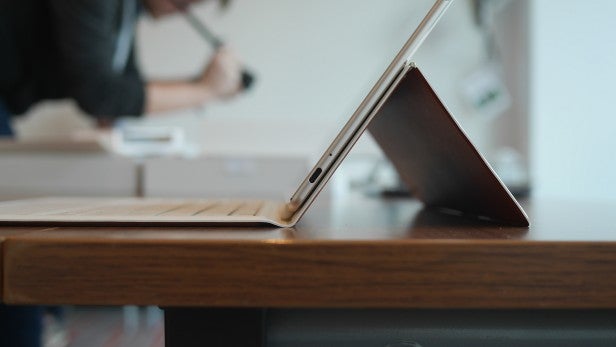 I also wasn’t a fan of the MateBook’s keyboard: the button press was harsh and the layout felt cramped. The MateBook E ditches that design and and uses island-style keys, which work far better and feel more responsive. The keyboard is also backlit, which is welcome.

I’m not a huge fan of the touchpad, though: it doesn’t feel as responsive as I’d have liked, despite the fact it’s a Microsoft Precision-certified piece of hardware.

The keyboard also doesn’t offer any elevation; it sits flat on the desk. It does at least feel stable, but it would have been nice to have some tilt for comfort.

Like the original device, the MateBook E will be compatible with MatePen, but whether it comes bundled with the device will likely depend on the retailer and the region you’re in. 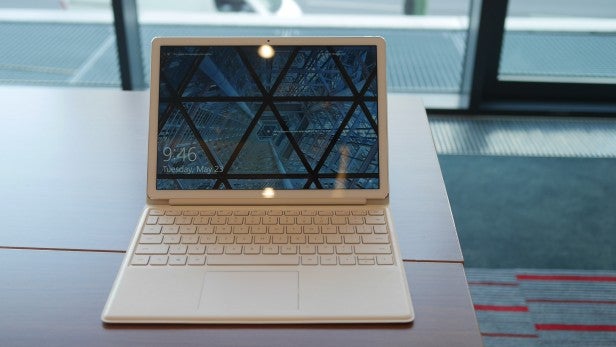 The tablet alone weighs 640g, and the keyboard adds an extra 560g to the overall weight – which is still nice and light. The MateBook E is available in three colour options: grey with a blue folio keyboard; gold and brown; or gold and pink.

Specs-wise, there’s a choice of either a Core M3 or Core i5-Y series processor, up to 256GB of storage and 4 or 8GB of LPDDR3 memory. Battery life is rated at nine hours of offline video playback, which isn’t brilliant  – but doesn’t appear to be a huge improvement on last year’s model.

I’m pleased that Huawei has taken another stab at the 2-in-1 market. With prices starting at €999 (probably £900 inc VAT) with the keyboard included in the box, it’s going to be a tight fight between the MateBook E, the more premium Surface Pro and Samsung’s various Galaxy Books.