The Huawei Matebook 14 is more versatile and boasts better battery life than the higher-specced MateBook X Pro. Sadly, uncertainty clouding Huawei's future makes this hard to recommend for the time being.

The Huawei MateBook 14 is a lightweight laptop which – at the time of writing, at least – runs Windows 10.

One of the latest lightweight laptops from Huawei, the MateBook 14 is a less powerful (and therefore less battery-hungry) counterpart to the refreshed 2019 edition of the Huawei MateBook X Pro.

Like Microsoft’s Surface Laptop 2, the Huawei MateBook 14’s display features a 3:2 aspect – that’s a little less common than the 16:9 displays you tend to see on laptops, implying that the MateBook 14 is more geared towards work than entertainment – but streamed content should look pretty good on this, too.

Also, there’s no denying it, the MateBook 14, along with others in the MateBook range, don’t half look like Apple’s new MacBook Air, albeit not quite as fancy and with more ports.

There is a very big and angry elephant in the room however, and that is the escalating trade war between the United States and China. Huawei has been caught in the crossfire here, and it’s very much looking like its laptop line won’t be running Windows (if it’s even running at all) for much longer. Still, if you’re not bothered about that and like to live dangerously, you might want to see what you can get for your money. 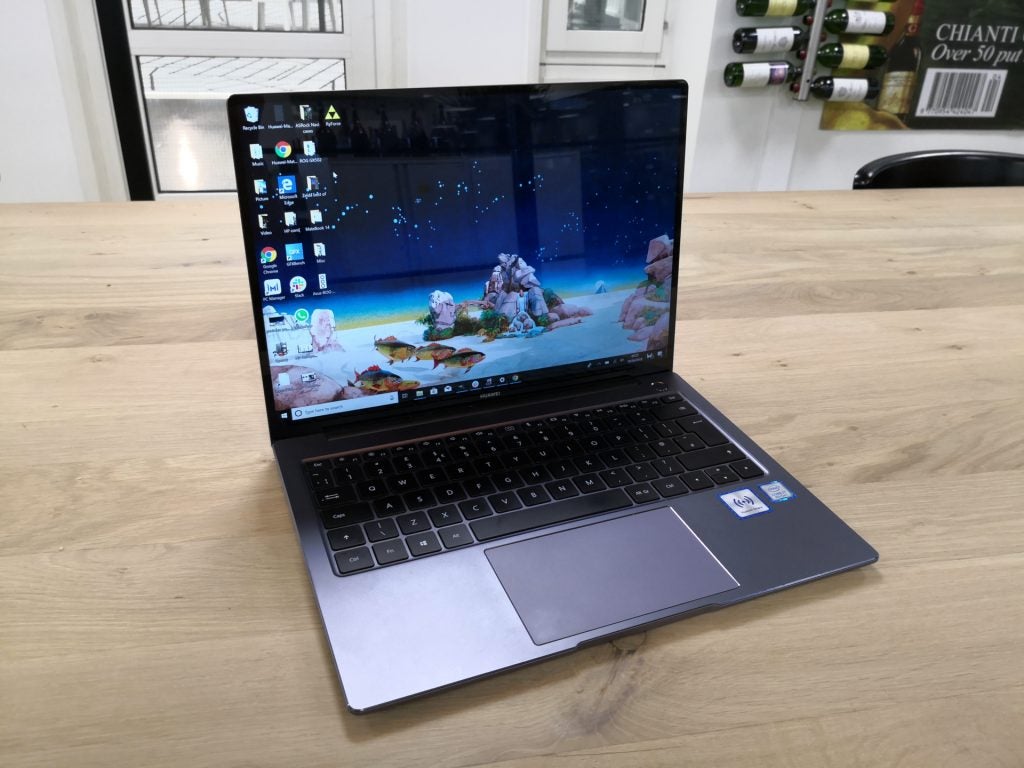 Is the Matebook 14 the best laptop you’re never going to buy?

The Huawei MateBook 14 is a fantastic plastic MacBook Air mimic

If you’re intrigued by the new line of Apple MacBook Airs, but were after something that a) ran Windows and b) was a little bit cheaper, then the Huawei MateBook 14 might be a good option for you.

OK, so the build quality here is not quite up there at MacBook levels, but for the most part, it still manages to look and feel like a premium device. The inclusion of a fingerprint scanner on the power key is a nice touch, no pun intended.

The keyboard is nice and roomy, and while you don’t get the likes of Home and End keys here, the roomy trackpad means that working on big reports, reviews and documents is no hassle at all.

I also generally liked the typing experience you get here, but the plastic keycaps feel cheap and wobbly. The keyboard is not as good as what you get on the Surface Laptop 2, the MacBook Air, or Huawei’s own MateBook X Pro. 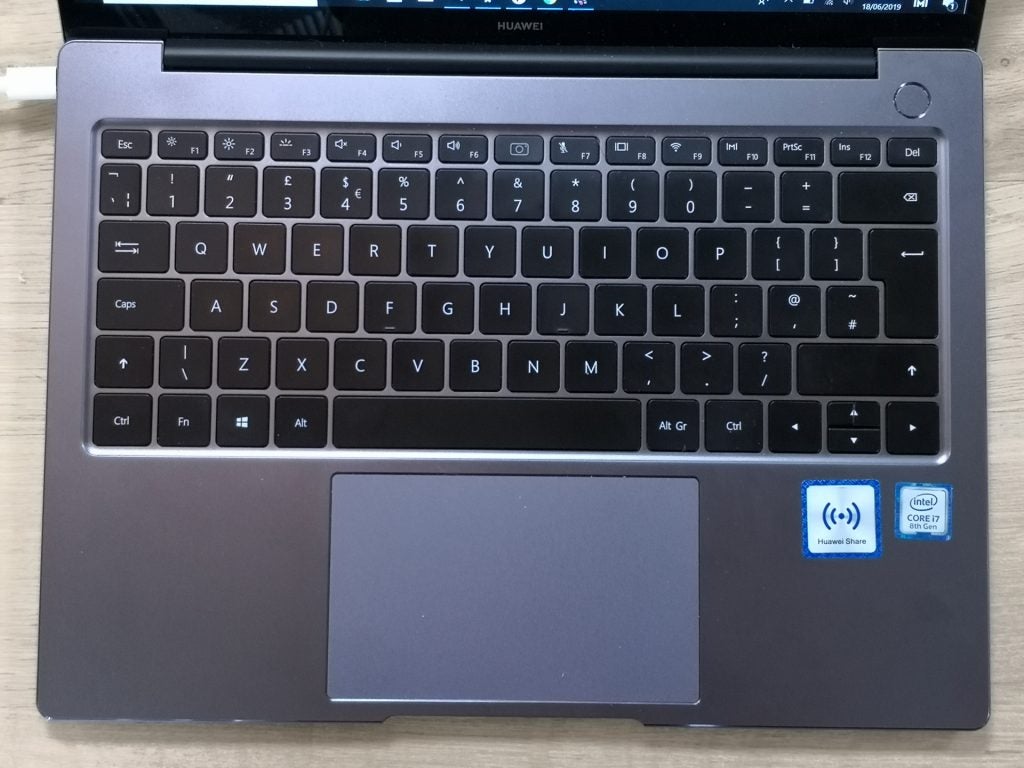 The MateBook 14’s keyboard is spacious enough, but I have concerns about the durability of the keycaps.

Regrettably, the ‘Up’ arrow key split after a couple of weeks’ worth of use, which is not a good sign about the longevity of the keycaps here. However, I was pleased to see that, despite the plastic body, the same degree of flex which plagues cheaper, less well-made laptops, is not present on the MateBook 14. It’s generally a very sturdy-feeling device (arrow keys excluded).

What I really like about the Huawei MateBook 14 can be found on its sides – you get a Type-C USB port, 3.5mm headphone jack and HDMI port on the left hand side, and two Type-A USB ports – aka the old school USB ports – on the right. That’s more generous that what you get on any of the other laptops I’ve listed above.

The USB-C port supports Power Delivery, so if you wanted to, you could pick up a dock which would let you add more ports while keeping the MateBook 14’s battery topped up.

A neat feature is Huawei Share, a wireless file transfer system which uses NFC and Bluetooth to quickly transfer files from your Huawei phone to the MateBook 14. It works just as it does on the MateBook X Pro.

Huawei Share is great if you want to get the odd selfie or audio file off of your phone in a pinch, but generally, Android File Transfer remains the best option for moving multiple files around at once.

Then there’s the pop-up webcam, hidden between the F6 and F7 keys. This neat James Bond-esque trick means that Huawei can ensure that the 14-inch screen has a super-thin bezel. Unfortunately, this also means that the camera will give whoever is on the other end of a video call an unflattering look at your neck and nostrils. 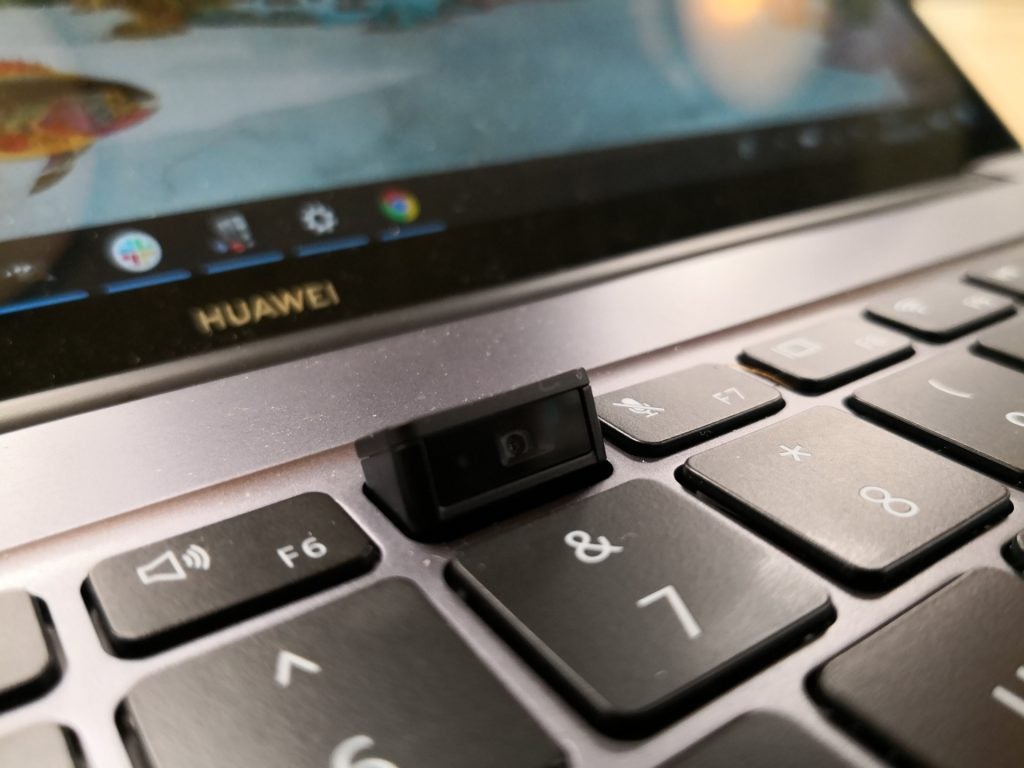 ‘Now look here, 007, a simple press of the key, and the hidden camera pops up. Do try to bring this back in one piece…’

In my tests, using DisplayCAL software and a i1Display Pro X-Rite colorimeter, the Huawei MateBook 14’s display was able to cover an impressive 90.0% of the sRGB colour space. That’s very good, as it means that games, digital art, websites and the like will look bright, vibrant and more or less as their creators intended.

Less impressive were the low Adobe RGB and DCI-P3 colour space scores, used mainly by photographers and videographers to colour correct and grade their work. I recorded 62.3% and 64.7% respectively here. That’s poor, as most laptops worth their salt will give you at least 70% coverage of these colour spaces.

These scores are not uncommon for laptops in this category as you can see above and below, so this isn’t a failing of the MateBook 14, but not really an argument in its favour either.

I recorded a colour temperature of 6656K during tests, which is really good – 6500K is the temperature that’s closest to natural light, with numbers below that being warmer/redder and numbers above that being cooler/bluer. 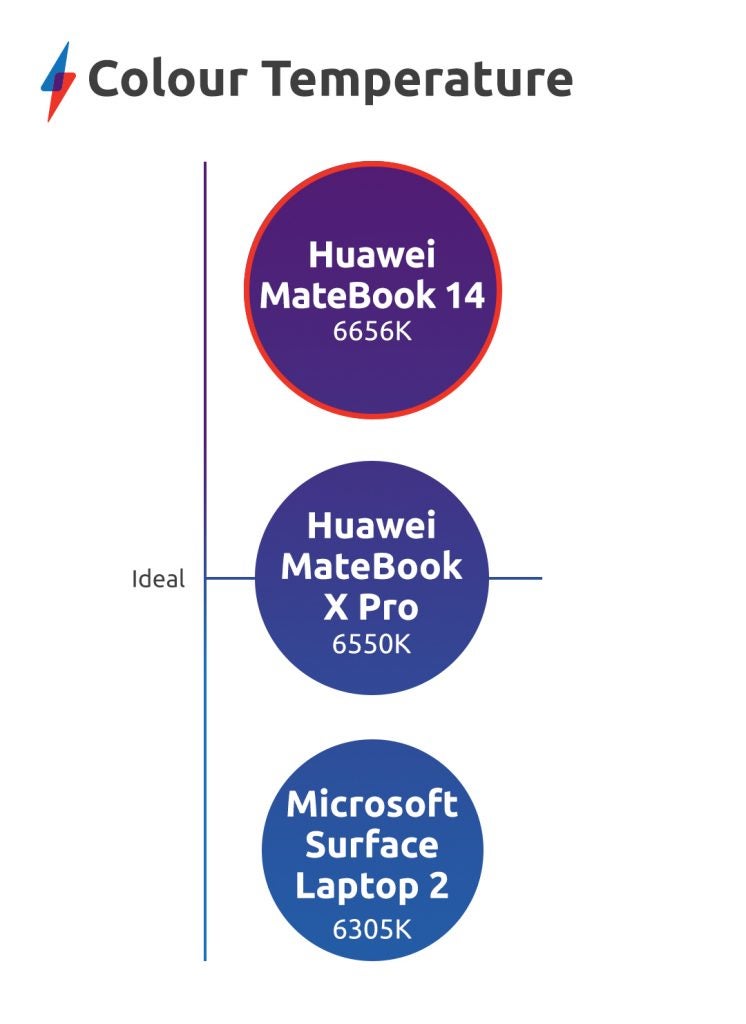 It’s a fairly bright screen, too. Top brightness levels I recorded with the MateBook 14 was 363.5 nits, enough for you to comfortably work in most environments, even outside on all but the sunniest of days. 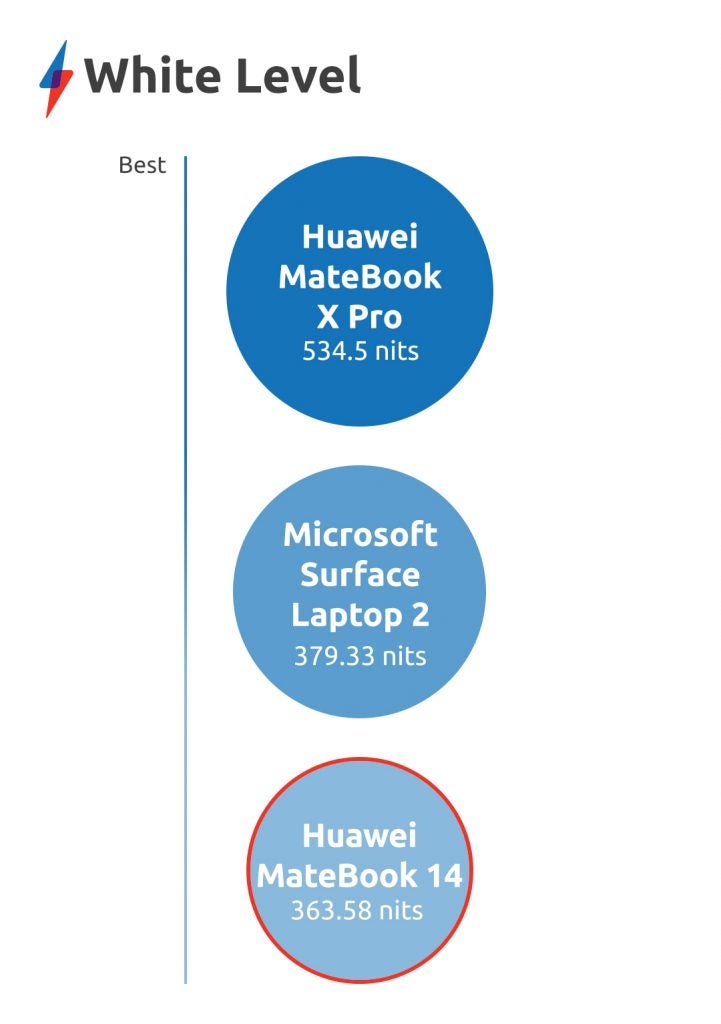 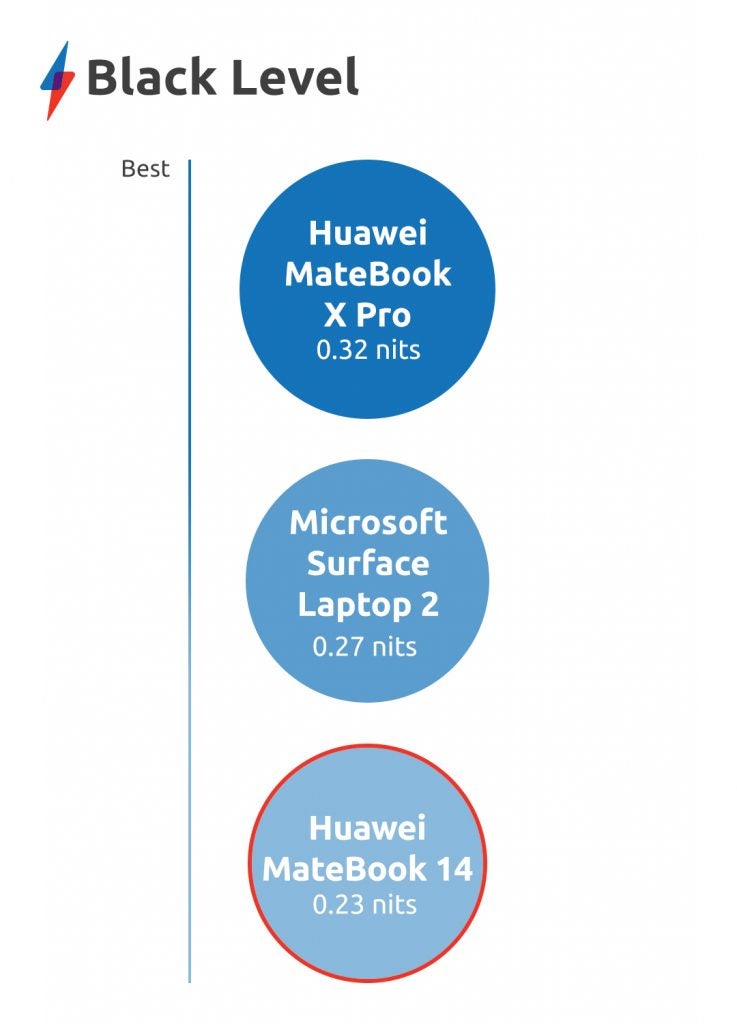 In practical terms, this means that dark areas of photos and videos won’t look too gloomy or indistinct (unless you’re watching that episode of Game of Thrones) and brighter areas of images won’t look blanched and washed out. 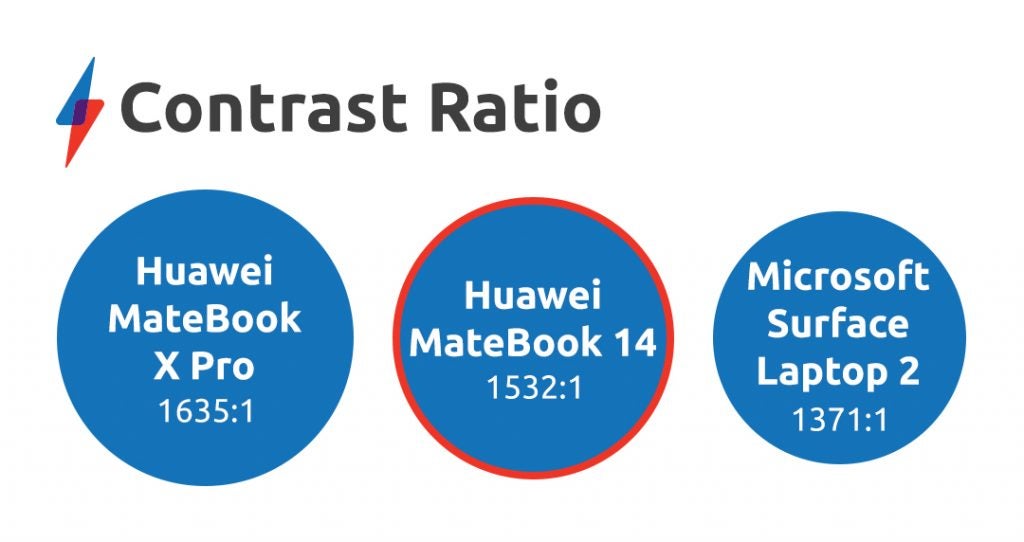 The MateBook 14’s battery will give you roughly eight hours of power, if you’re using it for work purposes, i.e. writing, photo editing, checking emails, all while streaming music from Spotify and YouTube.

For streaming, expect a little less, around the six hour mark. Whether I was catching up on new episodes of Killing Eve on iPlayer, The Sinner on Netflix, or watching fan footage of those new Tool songs on YouTube ad infinitum, I would get around six hours in before the power warning would start flashing at me.

I also looped a 2-minute 4K video sample until the Huawei Matebook 14 started to power down, and noted six hours and 55 minutes.

Running the ‘Work’ battery benchmark on PC Mark 8 gave me a score of four hours and six minutes, which is a little worse that what my real-world observations suggest.

In all instances, the screen’s brightness was dipped to 150 nits, and the speaker volume was kept at 50%.

While these scores are OK, it’s still under par for other laptops in its price range featuring the same processor – an Intel Core i7-8565U. From the so-called ‘Whiskey Lake’ range of laptop CPUs, other machines with an i7-8565U we’ve tested boasted better battery performance, including the Dell XPS 13 and Asus ZenBook Pro 14. 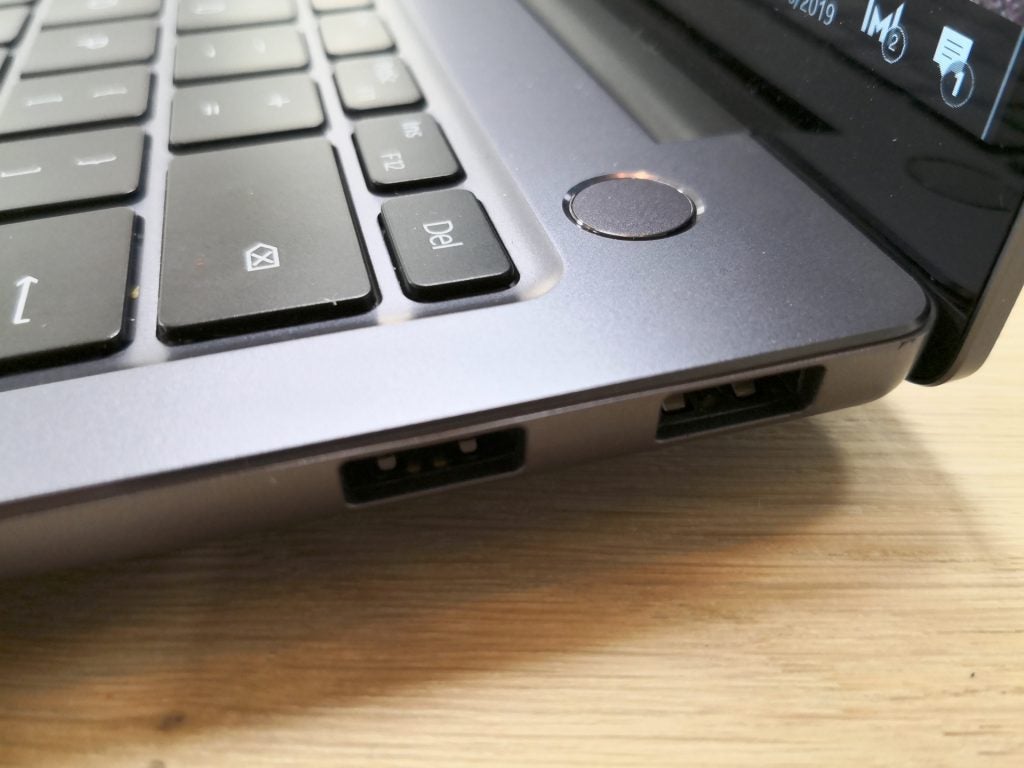 Two USB-A ports sitting below the fingerprint scanner and power key of the MateBook 14.

While working on something which required the dedicated graphics unit to really flex its muscle – like photo editing – I would notice that the MateBook 14 would get pretty hot. Here, I’d have to reach for the mains adapter if I wanted to get anything done without skirting into battery danger zone.

The good screen scores combined with the very fast disk read and write speeds means that opening up large photos and tweaking away is very breezy indeed. The very responsive trackpad comes into its own here too.

I was able to take the MateBook 14 with me out to a few work events and it held up pretty well. It actually travelled with me to Computex 2019, and I was able to hammer out all of my work filed there on this easily enough. 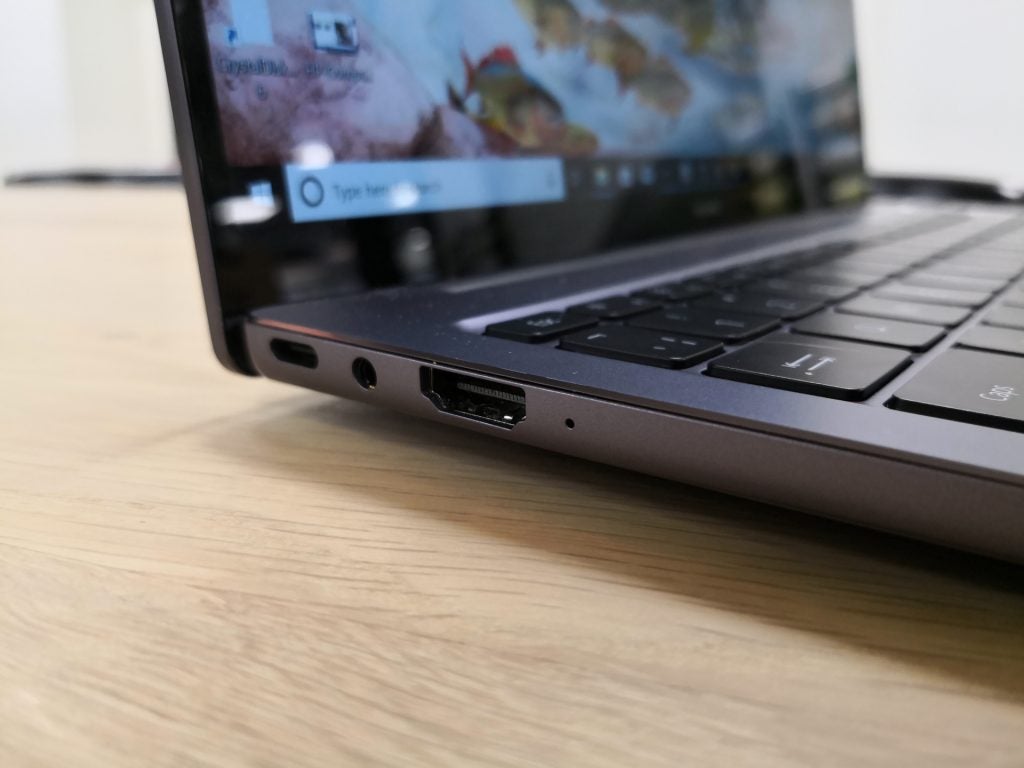 I definitely liked that I could connect this to a TV for presentations (and making Netflix appear on non-smart TVs) via the HDMI port, and the USB-C and two USB-As meant that I didn’t feel the need to keep a dock with me at all times.

You can get ultrabooks which are even more generous in terms of ports, sure – the Asus ZenBook 15 gives you the same, plus an SD card reader, for example – but if your question is, ‘is the Huawei MateBook 14 suitable for office work?’, then the answer is yes, yes it is.

If there’s one thing I definitely didn’t appreciate here, it’s the lack of lighting around the keys, making this almost impossible to use in dark conference centres. Unless you can touch-type with 100% accuracy (spoiler: I can not), then this is a mark against the Huawei MateBook 14. 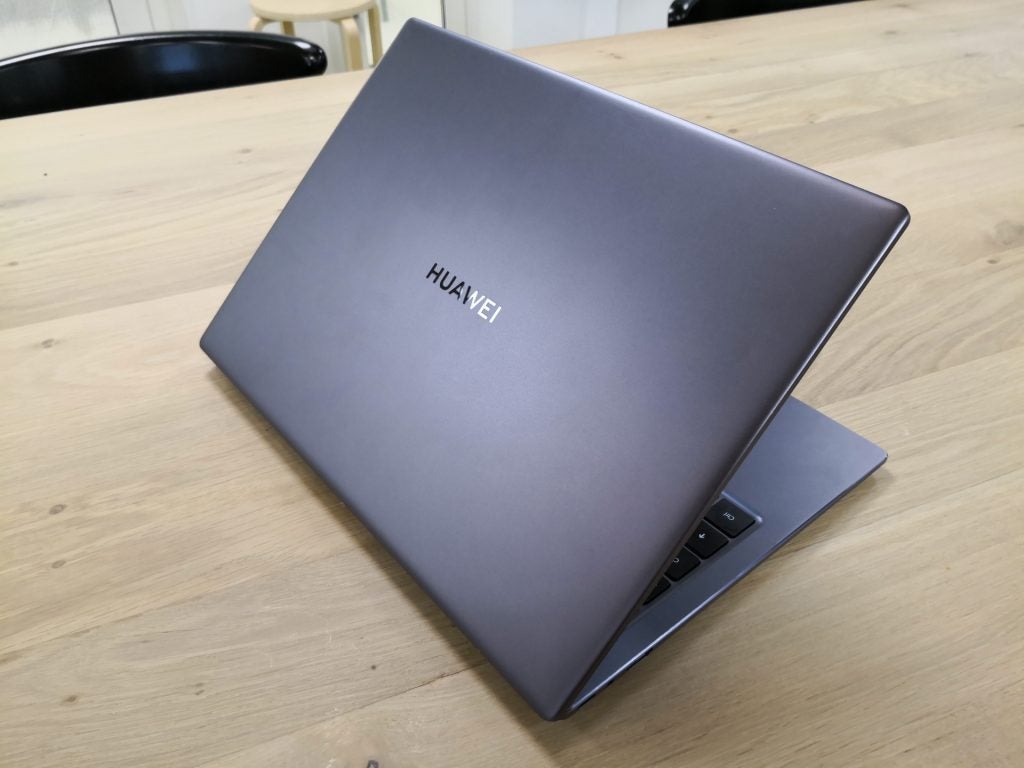 Personally, I miss the old opening flower Huawei logo, but this neat, boxy typeface is kind of nice, I suppose…

Should I buy the Huawei MateBook 14?

The Huawei MateBook 14 is a solid laptop that’s worth checking out, but picking one up right now comes with a degree of risk attached.

We don’t know if, or even when, the Executive Order on Securing the Information and Communications Technology and Services Supply Chain will be signed. This will effectively mean that Microsoft, Intel, AMD, Nvidia, Cisco, or any U.S. company can’t do business with Huawei without express permission (which they’re not going to get), meaning that for the time being, any consumer technology made by Huawei might not benefit from the level of support, frequency of updates you might expect.

Microsoft has pulled all of its Huawei goods from its official Store – although at the time of writing, they were back in the U.S. Store – meaning that you are more likley to pick up a MateBook 14 on Amazon and eBay.

If the relationship with Microsoft goes sour, Huawei says it has a ‘Plan B’ in store, and is apparently developing its own desktop OS. Whether it bears any relation (or even the same name) to Hongmeng, the mobile OS it’s working on, remains to be seen.

In the short term, all of this is a real shame, because there’s a lot to like about the Huawei MateBook 14. For now, I’d only recommend buying it if you’re prepared to ride out this storm of uncertainty.

By Thomas Newton Contact via Twitter
Freelance Writer
Thomas Newton has reported on UK consumer technology and telecoms for over ten years, and is currently working for Trusted Reviews as a freelance writer, mainly contributing weekend news stories and f…