Going back to the apps menu, this is perhaps the next most obvious area where HTC’s changes can be noticed. Here HTC has cluttered the pages of apps with tabs for Favourites, Frequent and Downloaded apps as well as links to a search feature, and the Android Play Store. It’s perfectly functional but feels a little cluttered and again we’re not sure it really improves the overall experience. 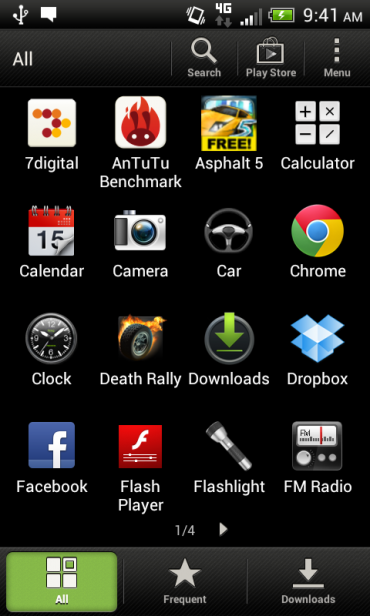 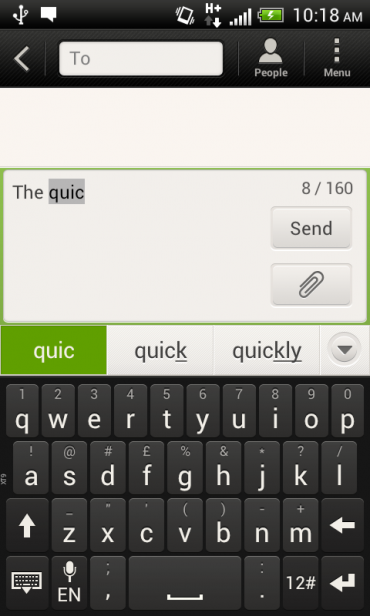 This theme continues throughout much of the interface with the keyboard, Email app and more feeling like they’ve been changed simply for changes sake. In particular we struggled with the keyboard, which despite a responsive and sizeable screen we found rather temperamental. Still, as this phone’s running Android you can of course swap the keyboard for one you prefer, also there are some more positive additions with HTC Sense.

We’ve long been a fan of the Dialler/Contacts page on HTC phones and with this phone we continue to be. The split screen approach lets you either just start dialling a number of scrolling through your contacts all from the same screen, and as you type the list of contacts will be whittled down to those that match, making for a really quick way of getting to the person you want. 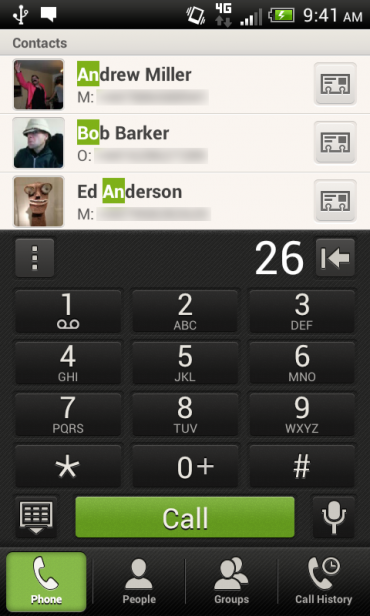 Other nice changes include the photo app which usefully provides one touch buttons for both taking a shot and starting video recording all from the default view. It also takes a single tap of the blue circle to get to the real time effects, which can be used to add an Instagram-style filter to your photos and videos.

Elsewhere the HTC One SV offers a comprehensive selection of core apps from the Google Chrome web browser (HTC does provide its own but we felt little reason to use it) through to the easy to use picture viewer, messaging app, integrated Dropbox and much more.

HTC may not have got everything right with its HTC Sense customisation of Android 4.0 but this phone still provides a great overall smartphone experience, particularly as Android offers an excellent selection of apps these days.

When it comes to actually using this phone for its core phone duties it holds up very well. The noise cancelling microphone delivers a crisp clean voice to the person on the other end of the line while the earpiece is reasonably loud and clear too. The loudspeaker isn’t the most powerful of fulsome sounding but it should be enough for most users needs.

We also encountered no issues with signal strength. In fact, as we’ve long found since Orange and T-Mobile joined forces to create EE, signal strength on this test SIM was excellent, delivering strong 3G signal in the entire area we tested it (most of south west London and out to Reading) and consistent 4G coverage once in London. 4G speeds were also impressive with us achieving 34Mbps download and 26Mbps upload speed from our offices in Southwark. 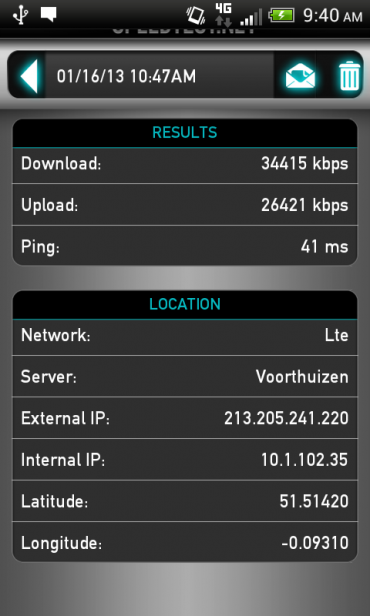 Despite, or perhaps because of, the presence of 4G battery life is also impressive. After fully charging we found the phone easily lasted a day with moderate use and still had nearly half charge after four days when used fairly sparingly. Obviously mileage will vary depending upon how intensively you use your phone – such as how much gaming and calling you do – but on our evidence this phone is a little better than average.

You get both front and back facing cameras on this phone, with the front model doing the requisite for video calling, but the rear camera is only a 5MP model. This trails well behind the best around at the moment, even falling behind the likes of the two year-old Samsung Galaxy S2. You also miss out on a shutter button for quickly opening the app and taking a snap. 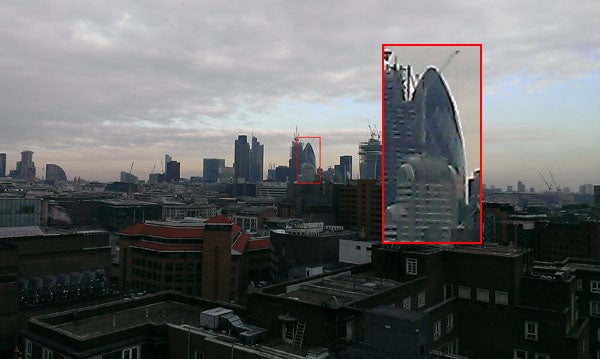 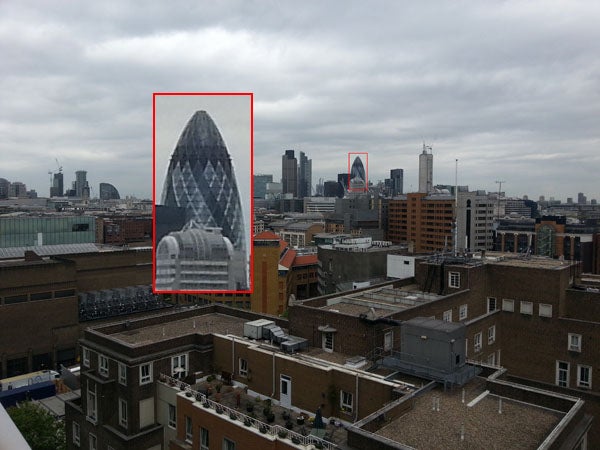 The difference in image quality can clearly be seen in our test shots both in terms of detail levels and the overall exposure of the shot; while the HTC One SV looks overly dark the Samsung Galaxy S3 is much clearer.

Still, with HTC’s easy to use app, you can generally get a reasonable shot without too much effort and the filters are genuinely useful. Plus, the 1080p video offered by this phone is actually pretty good quality and better than we’d expect of a relatively budget phone.

Overall the HTC One SV offers up a slightly peculiar selection of features. On the one hand it’s nicely designed, has a good quality screen, expandable storage, some modern favourites like NFC and of course there’s that 4G connectivity. But, on the other hand, its screen is low resolution, its processor relatively slow, its camera below par and its price too high.

The upshot is that we’re not really sure who’s going to be tempted by this handset. If you’re not fussed about 4G then there are many cheaper and equally well-featured handsets – such as the £100 Huawei Ascend G303 – even if some aren’t quite so smart looking. Meanwhile if 4G is the big pull then, given the price of EEs 4G contracts, we’d be surprised if anyone considering signing up wouldn’t take the hit and get a more premium phone in the process.