Where the HTC One SV really starts to show why it only costs around £300 rather than £450 is that its screen has a resolution of only 480 x 800 pixels. This is way below the level of modern high-end smartphones, which commonly have 720 x 1280 or even 1200 x 1920 pixel screens. The upshot is that, particularly when browsing the web, text isn’t as sharp. In fairness, this resolution is still plenty to get by and in fact you can still just about read the text when fully zoomed out from a web page. It’s just that when you can get more for your money, why wouldn’t you. 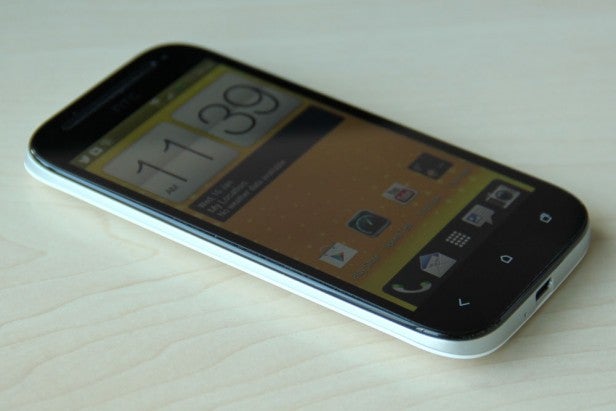 At least the quality of the screen is excellent. The LCD panel provides punchy colours, good contrast and has excellent viewing angles. It’s also one of these new laminated displays that looks like the picture is on the surface of the glass, not under it, which also makes it appear brighter and reduces distracting reflections. Nonetheless, there’s no getting round the fact that this screen is not just a step behind the best of this year but last year as well.

As the chips that power today’s smartphones have become more and more sophisticated, one area where we’re starting to see less and less significant difference between high-end and low-end handsets is in performance, and the HTC One SV is just such an example. Its 1.2Ghz dual-core chip doesn’t quite rival the big guns but it keeps this phone ticking along nicely with few noticeable pauses or moments of lag. This is something that’s reflected in our benchmarks which show this phone’s on par with the likes of the Sony Xperia S when it comes to browser speed (SunSpider).

That said, when it comes to gaming this phone does trail the best. Firing up a couple of reasonably graphically impressive games – Death Rally and Asphalt 3 – we did notice it get a bit slow every now and again. This is again something that’s reflected in our benchmarks which show this phone having a score on par with top-end phones from a couple of years ago.

Taking a closer look at this phone’s interface, it runs Android 4.0.4 which is the so called Ice Cream Sandwich version of the software. This is actually a decidedly old version now, as it debuted with the Samsung Galaxy Nexus back in 2011, and frankly we’d expect a more up to date version for a brand new phone.

The chief addition brought about by the latest Android 4.1 and 4.2 Jelly Bean updates are a smoother interface called Project Butter, which aims to make the phone feel even more responsive. 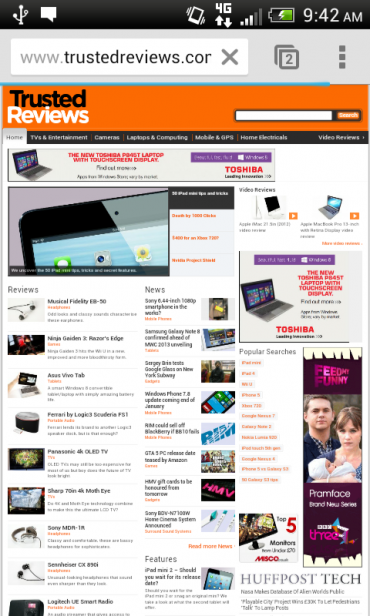 The default browser has also now been changed to Chrome, there’s a funky photo sphere panorama mode for the camera plus plenty of other nice tweaks. So to miss out on all that is a bit galling.

The main reason for this tardiness is that HTC likes to go to town tweaking the style and even function of some elements of the standard Android interface, and frankly the effort hasn’t really been worth it in our opinion. That said HTC Sense does look nice and adds a few useful extras.

Starting from the start, the lockscreen gives you quick access to four apps (the first notable HTC change) – Camera, Messages, Mail and Phone – or you can just unlock the phone and go to the main homescreen. If you’re playing music controls for play/pausing and skipping tracks will also show up here, though unlock with iPhones you can’t quickly jump to the music player when the phone is locked when music is not playing – a long term irritation of Android phones. 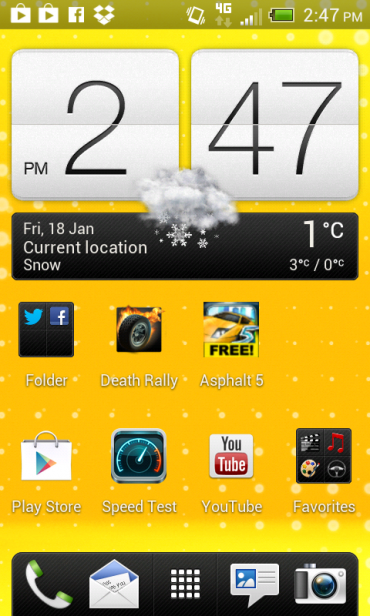 Once on the homepage the whole interface is noticeably different in terms of style to the default Tron-like look of Android 4.0, with a more sedate, almost Apple-like skeuomorphic style. It’s quite nice but we wouldn’t say it’s better.

On the homescreen you’ll find HTC’s signature, and still useful, Clock/Calendar/Weather app with space below for up to eight more apps, and either side are three more homescreens ready to fill with as many or few apps and widgets as you like.

Ranged along the bottom of the screen are the fixed shortcuts to four apps along with the central button for bringing up the main apps menu. These fixed shortcuts can be customised and even made into folders with it a simple drag and drop action to add apps together to create a folder.

As ever with Android, drag down from the top edge of the screen and you’ve got your notifications; the one stop shop for seeing what’s new whether it’s emails, new apps or a Facebook message. Plug the phone into a computer and this is also where you can choose to flip between charging-only mode and data-transfer mode. Like with most Android phones you don’t need any special software to add or remove files from the HTC One SV, just plug it in and drag and drop.