This laptop may be expensive, but the HP Spectre 13 is kitted out with some high-specification components. Processing performance comes from either an Intel Core i5-6300U or, like my review model, a dual-core, 2.5GHz Intel Core i7-6500U.

This chip can boost to a maximum speed of 3.1GHz when thermal conditions allow. Paired with 8GB of RAM it’s a speedy laptop, far faster than the 12-inch MacBook with its Intel Core M chip and around the same as the Dell XPS 13 and MacBook Air.

As a result, the Spectre 13 handles less intensive tasks such as web browsing and photo editing with ease, and while video editing is possible, this laptop isn’t designed for such tasks and therefore isn’t a viable replacement for a more powerful laptop or desktop.

The Spectre 13 performed well in our standard suite of benchmarks, scoring 6,776 in the Geekbench multi-core test, which is just a little better than the equivalent Dell XPS 13.

Graphics performance is as you’d expect from a super-slim laptop powered by integrated Intel HD Graphics 520. It will play basic 3D games and smartphone game ports, but push it any harder and it will struggle. I was able to play a bout of Minecraft at 60fps without issue, though. 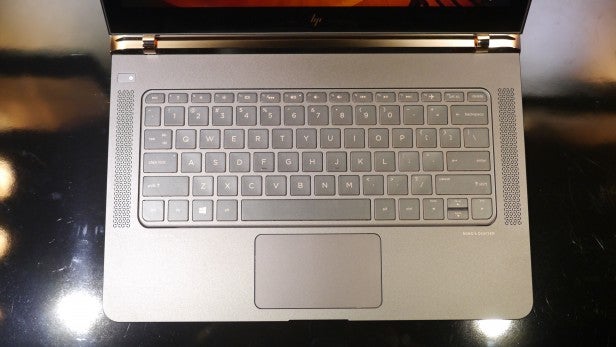 Storage comes in the form of a 256GB PCI Express SSD, which delivered outstanding performance in the AS SSD benchmark – a peak file read score of 1,255MB/sec. The Spectre 13 boots in seconds and there’s no hanging about when searching for files and programs.

There is a downside to such snappy performance, however. Even under moderate load, such as running Google Chrome, the laptop’s fans spin up to an audible whirr. It’s louder than a MacBook Air and significantly more so than a Dell XPS 13 – and it rather takes away from a design that you’d otherwise expect to be quiet and serene.

For a laptop that’s otherwise so portable, it’s a shame to discover that battery life is merely average. In our custom Powermark run consisting of a looping set of video and web browsing tasks, representative of a normal day of use, it lasted just 5hrs 13mins. It consumed 21% battery per hour when streaming Netflix at 150cd/m2 screen brightness, which will get you a little under five hours of streaming at a fairly low brightness level.

I also experienced issues with battery drain when the laptop wasn’t in use. I put the laptop to sleep on a Friday night at nearly 100% charge and by the time I was ready to do some work on a train on Sunday night, less than 48 hours later, the laptop had lost 67% of its charge, leaving me with only 33% to play with on my two-hour journey. In testing, I found the laptop lost between 1 and 2% per hour in sleep mode, losing 14% in 15 hours overnight in one of my tests. 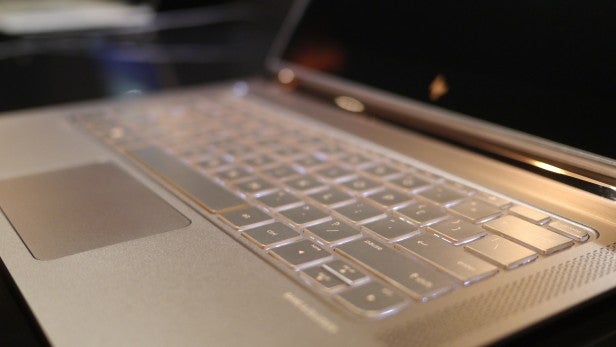 This result is nowhere near the overnight drain of the Microsoft Surface Pro 4, however, but it might be worth keeping the Spectre 13 charging overnight for an early morning trip.

Should I buy the HP Spectre 13?

At its current price the HP Spectre 13 doesn’t offer brilliant value, but right now you’d be hard-pushed to find a laptop on the market sporting such a slender build with this amount of processing power. Still, the compromises in battery life and noise will be too great for many buyers.

The HP Spectre 13 is thin, light and impressively powerful – but it’s a compromised experience.