It’s natural to want to categorise things, and laptops are no different. The category de jour is the slim and stylish Ultrabook, but there are plenty of others. Budget laptops, gaming laptops, ultraportables – but if you want something that sits in-between, the HP Pavilion DM4-2101 is a good bet. It’s not crazy-powerful but it looks great, has excellent battery life and offers enough grunt to perform all your everyday tasks. Apart from the washing.

This isn’t the first time we’ve seen this DM4 chassis. Back in 2010, we reviewed the DM4-1050ea, and it quickly become one of our favourites of the year. If anything, the design has improved. The “funky” lines across the chassis have been ditched, leaving the DM4-2101 with a commendably tasteful dark brown brushed metal finish. The only flashy element is the light-up HP logo in the top right of the laptop’s lid, and this remains a classy touch. 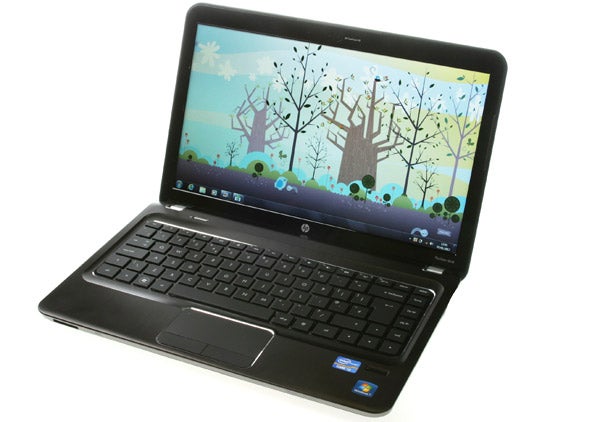 Style is one of the more notable aspects about the DM4-2101, because its specs are intended to keep it within affordable territory. It uses an Intel Sandy Bridge Core i3-2330M processor, has 4GB of RAM and a 5,400rpm 500GB hard drive. Using the integrated Intel HD 3000 graphics chip rather than a dedicated card, it’s not a powerhouse laptop but thanks to the often-surprising power of Intel’s current range, it can at least run most games (just at low graphical settings) and will power through any day to day productivity tasks. Now available for under £500, it seems quite the bargain if being a looker is part of your purchase criteria.

The inside of the laptop is just as tasteful as the outside. There are no extra media buttons, no superfluous splashes of colour and the colour scheme is muted without appearing dull. The only trim elements to break away from the muted brown and black of the keyboard and its surround are the bevelled edges of the sections that surround the trackpad, keyboard and hinge that expose the shiny metal from which they’re constructed. Next to it, comparably-spec’d laptops like the Acer Aspire 5749 and Dell 15R look pedestrian. 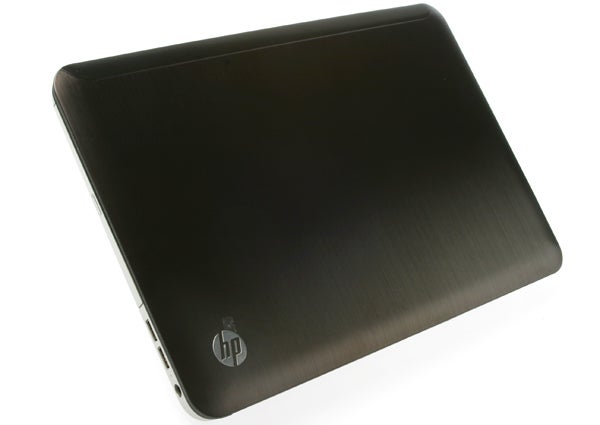 The brushed metal finish isn’t all for show either – it’s genuine aluminium rather than a plastic impersonation. A thin layer covers 90 per cent of the lid and the entire keyboard surround, although unlike a more expensive Ultrabook-style design, the rest of the chassis is plastic. This metallic layer is enough to give the DM4-2101 a flex-free, premium feel that is missing from the mostly-plastic laptops that inhabit this sub-£500 space.

In both size and weight, it straddles the gap between portability and at-home ease of use. It has a 14in screen and weighs just under 2kg – 1.987kg by our measurements – which is certainly not super lightweight but portable enough that you could easily cope with taking it on your daily commute (distance dependent of course). It’s 3.22cm thick, so does take up a fair amount of bulk in your bag compared to those ultrabooks but, again, with an appropriately sized and compartmentalised bag you’ll have no trouble.

Connectivity is good, but basic. The right edge houses two USB ports, power jack and the optical drive. This is one of the small let downs here as it’s only a DVD writer rather than a Blu-ray drive, which is understandable at the price but still notable. The left edge is home to the additional USB port, the HDMI and VGA video outputs, Gigabit Ethernet port and the SPDIF/headphone output and microphone input. There are no ports on the back, but there is an SD/MMC memory card reader on the front and a fingerprint reader within the keyboard surround. All the USB ports are 2.0 rather than the newer, and much faster, 3.0 standard, and the eSATA port of the 2010 model has now gone (this is the other let down). 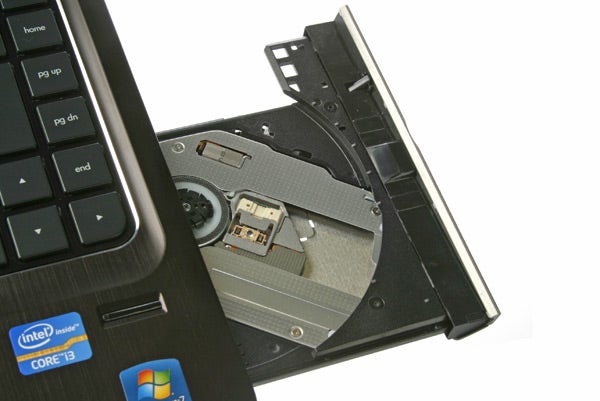 It’s simple, it’s tasteful – and while there are holes to poke in its spec list, at £499 we think many will be happy to trade USB 3.0 and a Blu-ray drive for better build quality and a neater look.

The HP Pavilion DM4-2101 has a 14in 1,366 x 768 display, intended to give it the portability edge over the standard 15.6in size without compromising on typing comfort or requiring you hold your knees together, looking like you desperately need a pee, in order to use the laptop on your knees. It’s a size we like.

Screen quality is unremarkable, though. The LED backlight’s maximum setting is sufficient but hardly dazzling and colour reproduction is just ok. Horizontal viewing angles are fine, but as usual with affordable laptops, loss of brightness and contrast shift kick in as soon as you start tilting the screen back. 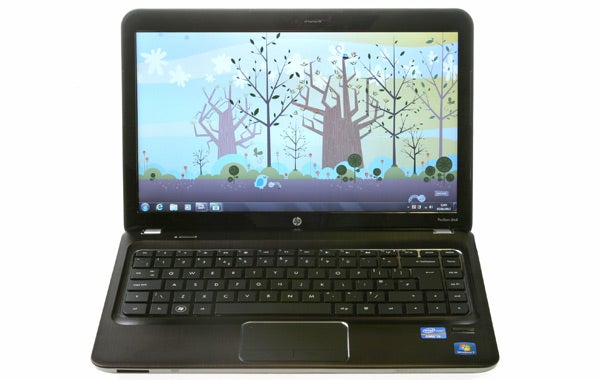 The screen’s hinge stops you from tilting back more than 45 degrees from upright (possibly in order to stop making this too apparent) but, twinned with the lack of a Blu-ray drive, the DM4-2101 is not the perfect multimedia laptop. It uses a glossy finish too, which becomes an annoyance when used outside, causing serious reflection issues – not good news given the standard TFT screen brightness.

HP rates the display at 200nits, which looks pretty weak when the Asus Eee Pad Transformer Prime can pump out 600nits in its Super IPS mode. Yes, admittedly the Prime is a different tub of transistors altogether, but we would have appreciated a little more luminosity, and a matt-finish option to boost its out-and-about usability. 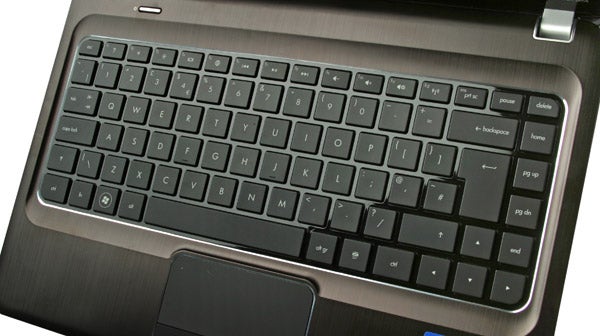 The Pavilion DM4-2101’s keyboard uses sharp-edged square chiclet keys of matt black atop a glossy black surround. Their action is a touch shallow but is definite enough to make typing comfortable and quick. And, like the rest of the laptop, it flat-out just looks good. The font on the keys is sharp and stylish without being self-consciously so and it has dropped all the caps outside of the character keys.

In keeping the number of keys on show to a minimum, some usability quirks have crept in, though. HP has messed with standard behaviour of the “F” function keys, so that the secondary function has become the primary one. You don’t press the fn and F3 key to increase brightness, just the F3 key. This change of priorities is relatively common but may irk some people, although we admit we’ve used these keys for their secondary roles far more than the standard ones over the past few years. 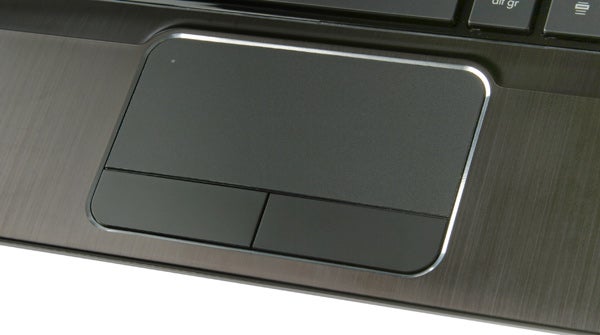 The touchpad is centrally-positioned below, and sensibly uses discrete buttons rather than the common two-button bar – hence no dead zone issues. As ever with HP laptops, a double tap on the little dot at its top left enables and disables the pad, which is something you’ll need to use it regularly as its placement puts it right below your right palm during typing. This is the only area where we might criticise HP for valuing the laptop’s look over its usability. In all honesty, we’re torn as you can bet it wouldn’t look quite as nice once the symmetry is ruined. This niggle aside, it’s just fine, with a lightly textured surface and multi-touch support. 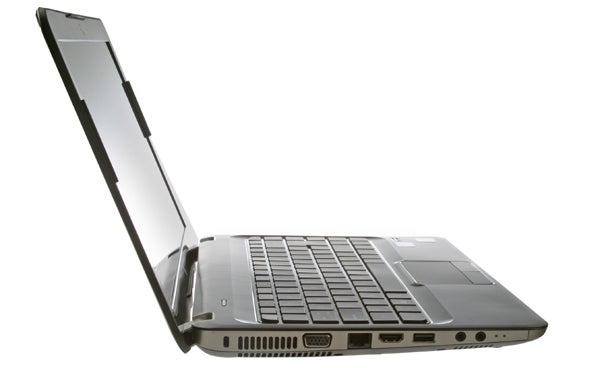 Up top in the glossy black screen surround there’s a 720p HP Truevision HD webcam, which produces decent image quality for video chat. It’s fairly quick to accommodate for changes in lighting, although doing so in jarring spurts, and the Pavilion DM4-2101 comes with a limited version of Cyberlink YouCam 3.5 for those desperate to post videos of themselves to YouTube or Facebook.

HP has got into bed with the Monster Beats audio brand in the past with some of its laptops, but the HP Pavilion DM4-2101 doesn’t get such lavish treatment. However, its speakers do bear another brand – Altec Lansing. Their grills sit on the underside of the laptop, as it curves up towards the front. Brand power does little for them, though. The bright sound has zero bass power and when volume is ratcheted-up, the top-end distorts unpleasantly. So typical for a laptop of this calibre then…

The HP Pavilion DM4-2101 features a Core i3-2330M processor and integrated HD 3000 graphics. This positions it as a lower mid-range model at best, but it is worth noting that this 2nd generation i3 boasts roughly as much power as the previous-generation i5 processor. In our benchmark test, its performance was roughly on-par with the i5 2010 DM4 model, while selling for a cool £150 less these days.

This level of performance is satisfactory for almost any kind of day-to-day productivity task. Similarly, while the 5,400rpm 500GB Hitachi hard drive and 4GB DDR3 RAM are nor particularly notable, they level-peg rivals at this price and shouldn’t prove to be performance barriers unless you’re looking at an intensive task like video rendering. There’s a memory slot free within the DM4-2101’s casing too, letting you easily upgrade to 6GB of RAM should you need it. 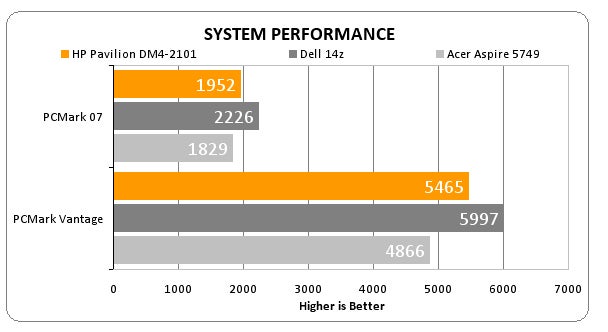 Where the DM4-2101 has improved over its 2010 series sibling is in gaming. The standard Sandy Bridge Intel HD 3000 graphics chipset may not be all that powerful, but it’s a big step up from previous integrated solutions. In the Trackmania Nations benchmark, it managed 41.5fps and came out with a near-playable 19.1fps average in the more demanding S.T.A.L.K.E.R. test.

An improvement over previous-gen budget models as it may be, this laptop isn’t ”much” good for gaming. For anything other than ancient classics and the odd indie title, you need a dedicated graphics card, i.e. a different laptop.

As much as many of you may hanker after the additional power of a Core i5 Sandy Bridge processor and dedicated graphics card, one area that benefits massively from a humble-but-efficient CPU is battery life. In our Mobilemark battery test, the Pavilion DM4-2101 lasted a jaw-dropping nine hours and two minutes, making the DM4 appear an athlete among asthmatic, gasping weaklings. The glossy screen and not-quite-ultraslim build may have lost the Pavilion some portable cred, but the excellent stamina wins it back, and some extra to boot.

Up until recently, the Pavilion DM4-2101 sold for a shade under £600, putting it up against devices with features missing here – such as discrete graphics and USB 3.0. However, now that it has dropped down to under £500, we can’t help but conclude it’s a solid gold laptop, just like the DM4-1050 before it. The speakers are poor, the screen’s not fantastic and the keyboard’s quirks take a bit of getting used to. But the attractive design, solid performance and fantastic battery life put it right back at the top of the tree.

Verdict
Classy design, great build quality and stunning battery life make the DM4-2101 very easy to recommend. It’s not without problems, lacking advanced connectivity and featuring an average screen and poor speakers, but you rarely see the basics provided for as well as you do here for under £500.