Our review sample was supplied by Save on Laptops.

Plenty of desirable laptops have appeared in 2011. Shiny, slim, light and made of metal, top-end laptops have never looked so good. But not everyone wants to shell out upwards of a grand on a computer. If this sounds like you, the Acer Aspire 5749 is a new budget laptop to check out. It costs just £399, but has enough power to satisfy most.

The 15.6in Acer Aspire 5749 is a no-nonsense laptop. It doesn’t try to be ultra-slim or ultra-stylish, but cares more about value than making you fit in alongside the Macbook-owning, Starbucks-sipping masses that seemingly inhabit every urban street.

Its design is conservative, but tasteful enough to avoid looking flat-out boring. The keyboard surround and lid are made of grey plastic and inlaid with an embossed texture that’s immune to fingerprints, but consigns this lappy to the land of the slightly drab. When the layout of its insides, with a simple design not weighed-down by
extra buttons, has the potential too look a lot nicer, we’re left
wondering whether the Aspire 5749 would get a kick up the looks
leaderboard if the texture were replaced with something a little more
refined. 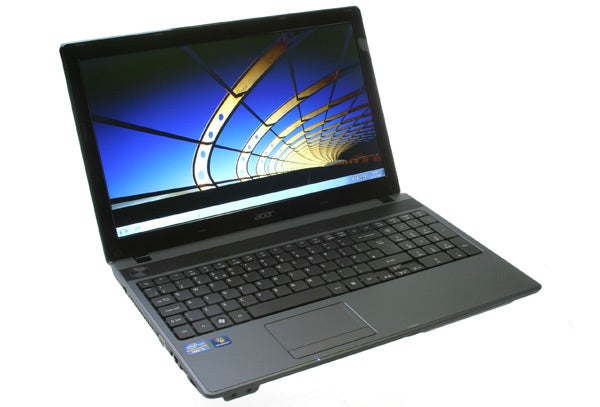 Looking beyond this surface, the laptop is a build success.  There’s little flex to its bodywork, and we’re sure some of you will appreciate its low-maintenance, fingerprint-free appeal. Sturdiness over style is the order of the day, apparently. The screen surround is standard glossy black plastic – which picks-up fingerprints as well as any other glossy surface, but won’t spend much time in congress with your digits anyway. 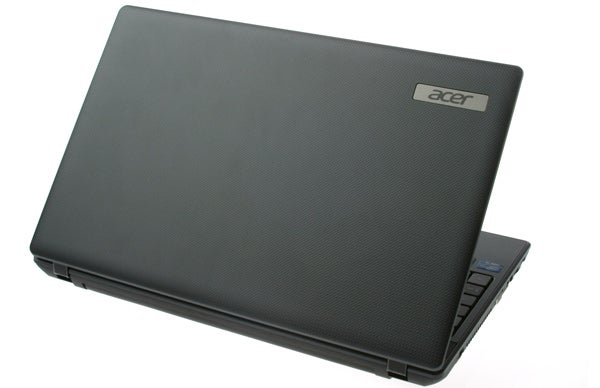 On-body connectivity is, as you might expect by now, functional rather than fancy. On the right edge the Aspire 5749 has two USB 2.0 sockets and a DVD multi-writer. Around the other side, there’s an additional USB port, a full-size HDMI output, Ethernet port, VGA video output and the power socket.

Connectivity is topped-off up front by well-placed 3.5mm earphone and mic jacks, plus an SD card slot. You miss out on a Blu-ray drive, USB 3.0, and other less likely inclusions such as Thunderbolt, but the plain fact is that many people simply don’t care about these things. Especially when they would add more than a few pounds to the 5749’s otherwise-low price. There is a stand-out bullet point in the spec list to make up for the uninspiring socket selection – at 750GB the hard drive is much larger than we’d expect at the price. 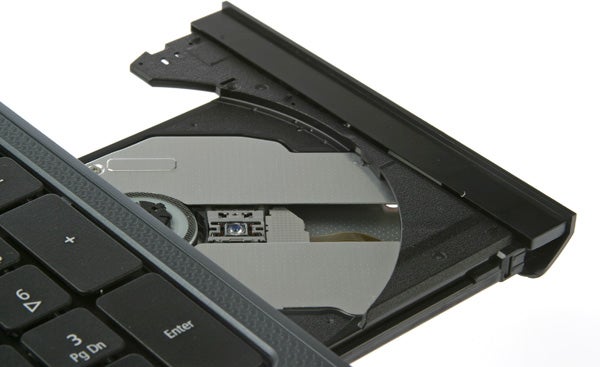 What is certainly worth considering, though, is that it’s not as portable as a smaller 13.3in option. With a 15.6in screen and 2.4kg girth, its best for those who want an at-home device to take out just occasionally. If you want an all-purpose travel laptop, you may be better off with something like the similarly-priced 13.3in Lenovo IdeaPad Z370.

The Acer Aspire 5749 has a 1,366 x 768 pixel 15.6in screen using a TN panel – the standard for all mid-range laptops of this size. At the price, you simply won’t find anything else unless you make do with a tablet hybrid like the Asus Eee Pad Transformer.

TN panels tend to offer the worst image quality of all the most common LCD types (IPS, PVA) but, surprisingly enough given the price, performance is pretty good here. Colour reproduction is fairly rich, where entry-level laptops often look rather cold and sterile, and contrast is good. Of course, this being TN tech, there’s plenty of contrast shift once you tilt the screen back, and the Aspire 5749 gives you plenty of scope to blast away the image doing so. The hinge lets you tilt the screen back so there’s only about 30 degrees between it and the surface it’s resting on – much more than many. 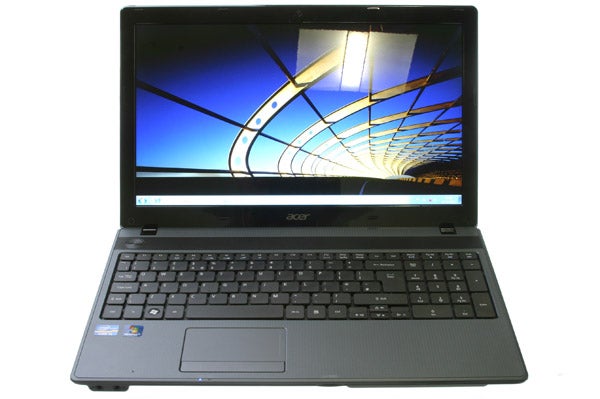 Horizontal viewing angles are respectable. There’s plenty of loss of brightness beyond when you stray beyond 45 degrees, but it’s capable enough to get two or three people huddled around the display for a spot of gaming or movie-watching.

The surface of the display is glossy, which sparks off reflections from light sources, but the maximum brightness setting is enough to cope with most outdoorsy scenarios. Maximum brightness does wash out colours a little, and spoils black depth a tad – the best image performance is found between the 50 and 70 per cent brightness marks. As you might guess from its practical approach to – well – everything, the Aspire 5749 does not have a brightness sensor, so doesn’t have an option to tailor backlight intensity to your surroundings automatically. 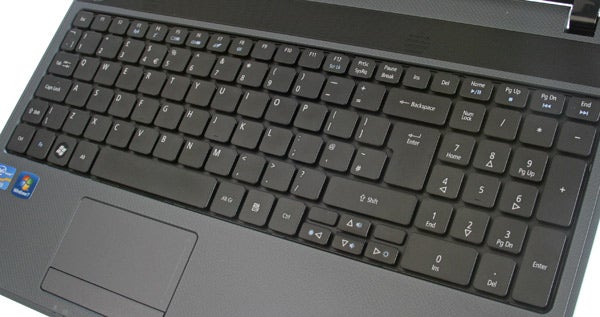 The keyboard uses a “floating” chiclet design, where each key is a thin plate atop a mechanism at its centre. It’s the one element of the Aspire 5749 that’s a little interesting, visually. This design does make the keys feel a touch wobblier than a more conventional chiclet design, but there’s a decent amount of travel, giving a reasonably satisfying action. The keyboard is an element that really benefits from a non-compact design, allowing for larger keys and removing the need to make the action too shallow.

The trackpad below is nothing too special, but it’s an area where a conventional approach really works. Its plastic surface isn’t snazzy, but the light texture gives a feel that’s not a million miles away from the glass touchpads of Apple’s Macbooks – thanks to a similar level of friction. 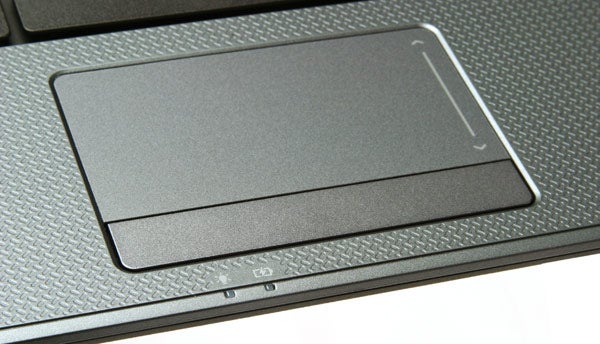 Underneath, the two mouse buttons are incorporated into a single bar, resulting in a ~1cm dead zone in its middle. It’s no biggie, though, and the buttons’ action is definite and not too loud. Overly clicky buttons can get annoying if you’re going to be tapping away in a lounge with other people nearby, watching Strictly Come Dancing.

Things aren’t quite so hot when you let the Aspire 5749 take on AV duties. The stereo speakers, which pipe out sound from two little circular cut-outs in the grill above the keyboard, are pretty weedy, incapable of providing the grunt required to give movies and music the necessary body.

A big selling point of the Acer Aspire 5749 is that it offers a Sandy Bridge processor. It may be the low-end i3-2330m model, but it offers similar performance to the previous-gen Intel i5 processor – and better performance than the AMD and Core 2 Duo CPUs many comparable laptops are stuck with. 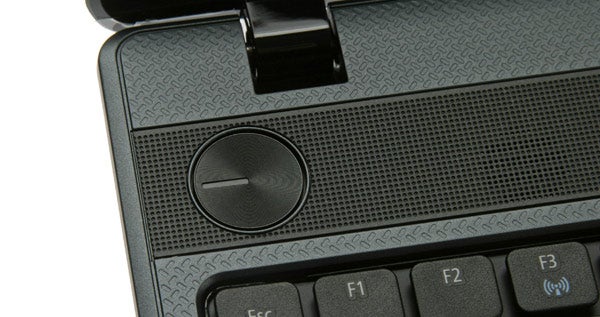 The i3-2330m is a dual-core processor clocked at 2.2GHz, and it’s complemented by integrated Intel HD 3000 graphics and 4GB of DDR3 RAM. As an affordable laptop for those with very general needs, this is easily enough power. Sandy Bridge represents such a boost over previous-gen chipsets that even this low-end model is extremely capable. In the PCMark Vantage Benchmark, it scored 4866 points. 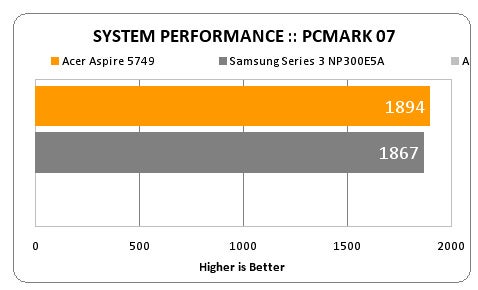 Its capabilities don’t extend to gaming, though. The Intel HD 3000 may be an upgrade over previous generations of Intel’s integrated chips, but it’s still not much cop. It can handle oldies and newer indie titles, but don’t expect it to cruise through Batman: Arkham City – the Aspire 5749 will be stopped at the city gates.

It scraped together 39.4fps out of Trackmania Nations and a jerky 17.5fps out of the more demanding S.T.A.L.K.E.R.: Call of Pripyat. To get decent gaming performance from a laptop, you’d need to spend at least another hundred pounds.

Acer claims that the Aspire 5749 will give you six hours of operation from its 6-cell battery – higher than the average, which sticks around the 4-hour mark at this price and spec. This should have been the feature to differentiate the laptop from its direct rivals, but in our productivity benchmark it conked out after five hours of use. It’s a decent result, but is less than the similar Samsung Series 3 – which has a worse screen, but an arguably snazzier design. 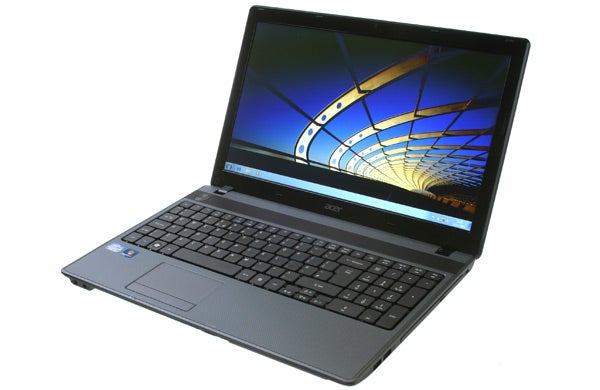 This is the Acer Aspire’s 5749’s problem. It’s a well-made laptop that chucks out the right features to lower the price – vanilla in all the right ways, for the most part. However, for just a slightly greater outlay you can get a laptop with a little more style or a longer battery life. If the 5749 had achieved stamina closer to its claimed time, we’d feel much happier recommending this computer. The partnership of a pared-back feature set and the great Intel Sandy Bridge i3-2330m processor is an undeniably good one, though, and a great many older laptops languishing around the £400 mark can’t match the level of power it provides.

The Acer Aspire 5749’s approach to laptop design is one we like. It has removed any extraneous features many people won’t appreciate, such as USB 3.0, instead investing in solid build, a decent screen and a plucky Sandy Bridge i3 processor. It may not have style or grace, but it gets the basics right. Unfortunately, we found the battery life didn’t quite meet expectations, making this a sound, rather than great, buy. 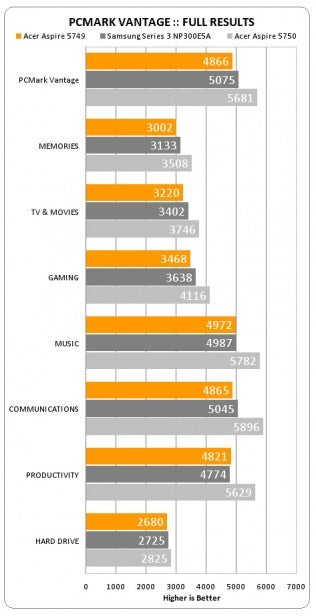