Most of us like to be able to express a bit of
individuality, and some would see their portable electronics as no less of a
fashion statement than the clothes they wear. Dell has always catered to a
variety of tastes with many of its mid-range laptop and desktop systems, and
continues to do so with the replaceable lids of its Inspiron 15R (also known as
the N5110). That aside, you also get a pretty decent mid-range all-rounder with
solid construction, specs and good connectivity, so let’s find out how
this versatile 15.6in laptop holds up. 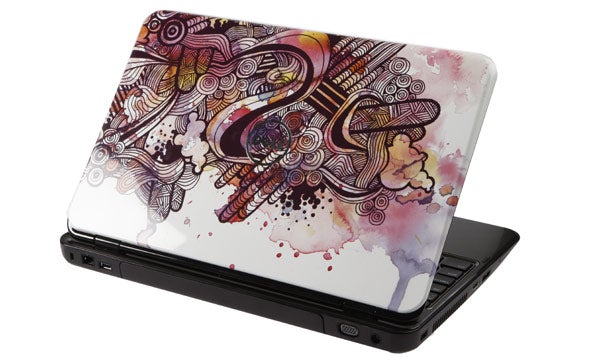 The Inspiron 15R is a classic mid-range laptop, coming in
just above the cheaper £279 Inspiron 15, at £419. That £140 difference nets you slightly better connectivity, more choice of specs, and this range’s signature interchangeable lids. The range tops out at a still reasonable £699 while our review sample will set you back £579.

The 15R’s styling is quite
attractive, if fairly basic. You get a chunky but suitably all-matching glossy black base, with your lid of choice sitting on top. There are over 34 lids to choose from in a variety of colours,
textures, patterns and designs. They’re not all the same price though, and some
will set you back as much as £40. Thankfully, a “diamond black” lid is included
in the default price. Switching lids is as simple as can be: merely push an
unobtrusive button above the hinge to release the lid and slide it off.

The glossy black plastic used for the rest of the chassis is
quite attractive, enhanced by a subtle faux brushed-metal pattern. This also
makes it less of a fingerprint magnet than many shiny finishes, but prints and
grease marks are still visible, depending on the angle you’re looking from.

The matt-keyed chiclet keyboard, meanwhile, is nicely offset
from its surround by a narrow chromed strip, while the chrome power button is
backlit in white. Rounded edges and a few curves make for a nice contrast to
the sharp lines we so frequently observe on other laptops. 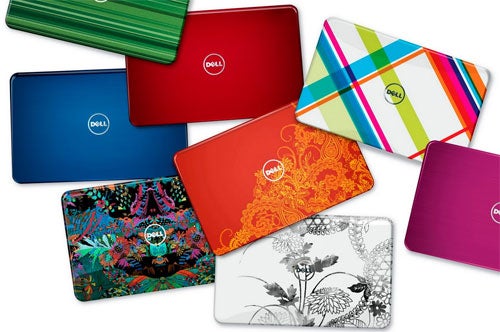 Build quality is decent enough, with a little flex here and
there on the chassis and quite a lot under the keyboard, but there are no
obvious areas for concern. The hinge seems quite sturdy and ensures the screen
stays in the exact position you put it in. 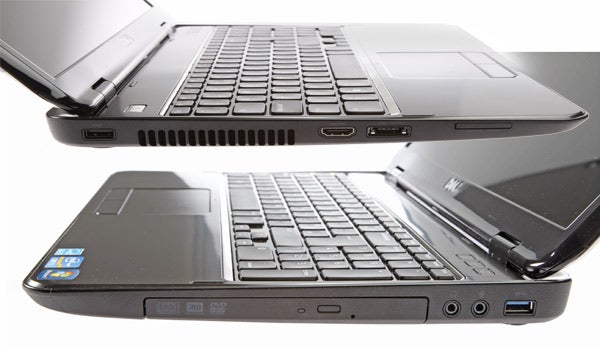 Where the 15R really begins to shine is in its connectivity.
Along the left you’ll find two USB 2.0 ports, one of which doubles as eSATA.
There’s also an HDMI 1.4 port and SDXC card reader. To the right we have our
first USB 3.0 port joining headphone and microphone jacks and a tray-loading
DVD writer.

Meanwhile the back houses a second USB 3.0 port, VGA for those with
older monitors, and a Gigabit Ethernet port. If you want to hook up without wires, you’re covered by both Wi-Fi N and Bluetooth. To be honest, we can’t
think of a single important omission on that list. Throw in the HD webcam, and
it becomes obvious Dell hasn’t skimped on features here.

Dell’s keyboards have been a bit hit and miss recently, and
its Inspiron 15R treads somewhere in the middle of the road. Good points
include a logical layout with well-spaced keys, though there are no secondary
functions on the cursor keys, as we’ve come to expect. Individual keys offer a comfortable shape and
surface, and adequate travel with a nice click. However, the positive effect is
somewhat ruined by cheap-feeling rattle and flex throughout.

Despite this, we would reckon the typing experience is
superior to that found on the company’s high-end Dell XPS 15z, and about on par with the XPS 15. We wish Dell would pay more attention to making its keyboard usable rather than messing around with them for aesthetic reasons – usability really is one of the prime factors for any portable device. 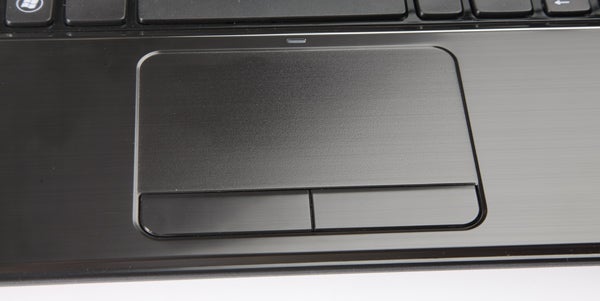 We’re loving how the touchpad is seamlessly (literally)
integrated into its surround. To differentiate it is slightly recessed and
features a change in texture to a smooth matt finish that feels lovely on the
finger. It’s large enough for effortless multi-touch gestures, doesn’t
interfere with typing, and is very sensitive. Its buttons are likewise huge,
easy to press and offer a nice amount of travel, making for excellent pointer
navigation.

Similar to the XPS 15z, the Inspiron 15R’s speakers manage
impressive levels of detail with plenty of clarity at the high end. However,
distortion increases along with volume and bass lacks the punch you’ll find
from some rivals. Even so, for a budget laptop this is a reasonably impressive
showing.

Unlike their XPS cousins the Inspirons don’t offer a Full HD
screen option, so you’re stuck with 1,366 x 758 pixels. That’s not necessarily
a bad thing though, and it’s the standard resolution for 15.6in laptop screens
everywhere. In addition, the TN-based display here is actually quite good. 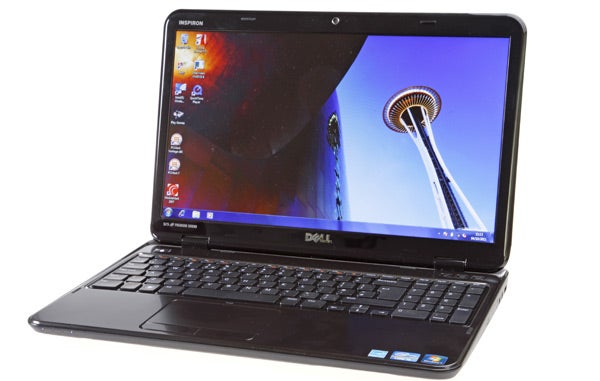 Contrast is decent with only the two darkest shades on our
greyscale remaining indistinguishable, aided by even backlighting with minimal
light bleed. Colours are punchy, thanks in part to the screen’s glossy finish (which obviously has the downside of being reflective but this is the norm at this level). Last
but certainly not least, viewing angles are unusually good for a cheap TN
screen, with only some contrast shift spoiling the party.

When it comes to performance there is plenty on tap, with
Dell’s flexible spec choices meaning the Inspiron 15R caters to a wide range of
users and budgets. Our £579 configuration (going by the swanky model number of 5110-1274)
has a dual-core Intel Core i5-2410M at the helm. This is the slowest and
cheapest Core i5 processor going, but it’s still plenty fast enough for nearly
every task, with a standard clock speed of 2.3GHz and Turbo frequency of up to
2.9GHz. It also supports up to four ‘virtual’ cores. And if that’s not enough CPU
for you, you can get up to a Core i7-2630QM.

Returning to our machine, it sports 4GB of RAM. The cheapest
£419 15R starts off with 3GB, but we definitely recommend spending the extra to
get 4GB. Storage on our 5110-1274 model comes in the form of a 5,400rpm 500GB
hard drive, and though we might have hoped for a speedier drive, it should provide
adequate space for the average user.

On the graphics front, meanwhile, you get a dedicated Nvidia
GeForce GT 525M. While we would hesitate to class it as a ‘proper’ gaming card
(leaving that title to the GTX 460M and upwards, as found in the award-winning
Medion Erazer X6813), it certainly lets you play less demanding titles in all
their glory at the screen’s native resolution – as demonstrated by a smooth
35.7fps average in Stalker: Call of Pripyat with details
turned up to maximum.

It’s certainly worth keeping in mind that Dell’s high-end
15.6in XPS 15
comes in at only £599 for the exact-same configuration, and for the £10
difference you might want the extra flexibility and options it provides.
However, you will be ‘stuck’ with its (rather nice) default brushed aluminium
lid.

With a starting weight of 2.65kg, the Inspiron 15R is about
average for a 15.6in laptop. Battery life is
actually slightly better than the norm, however. Thanks to its 48Wh replaceable
unit, the 15R beats similarly-sized machines like the Asus N53SV and Acer Aspire Ethos 5951G – though it in turn gets trounced by Dell’s own Dell XPS 15z.

When it comes to value, however, the entire Inspiron 15R/N5110
range hits a bit of a snag. While certainly not too overpriced, the fact
remains that, unless you have a particular need for USB 3.0, there are
cheaper systems readily available with better specifications for most of the range’s
configurations. 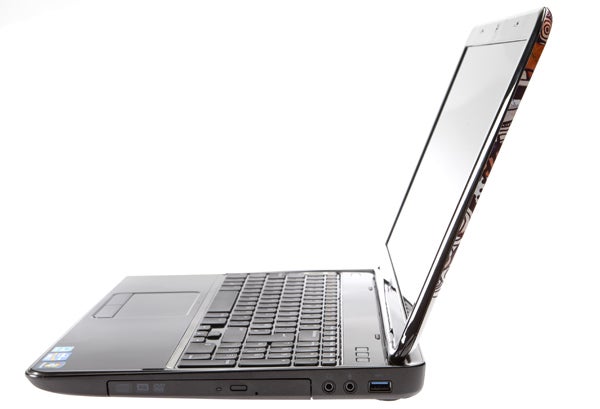 Of course, they might not hold up as well in certain areas,
and you do lose out on the unique ability to effortlessly switch lids. However,
comparing to our review spec, the Asus N53SV currently gives you more RAM, a larger hard drive, a Blu-ray drive
and far superior graphics for just £20 more. In the face of all that, its
inferior screen and battery life are probably negligible.

With the 15R, Dell has put together a versatile 15.6in
budget to midrange laptop that doesn’t compromise on connectivity. Relatively
minor weaknesses with its keyboard aside, it holds up well overall, with the
interchangeable lids being a great way to change the design according to your
mood or to match the colour of your shoes (if you’re that way inclined).
Unfortunately, at the moment its pricing doesn’t make it the most competitive
option out there, and without other areas where it truly excels, it’s worth
checking out alternatives.